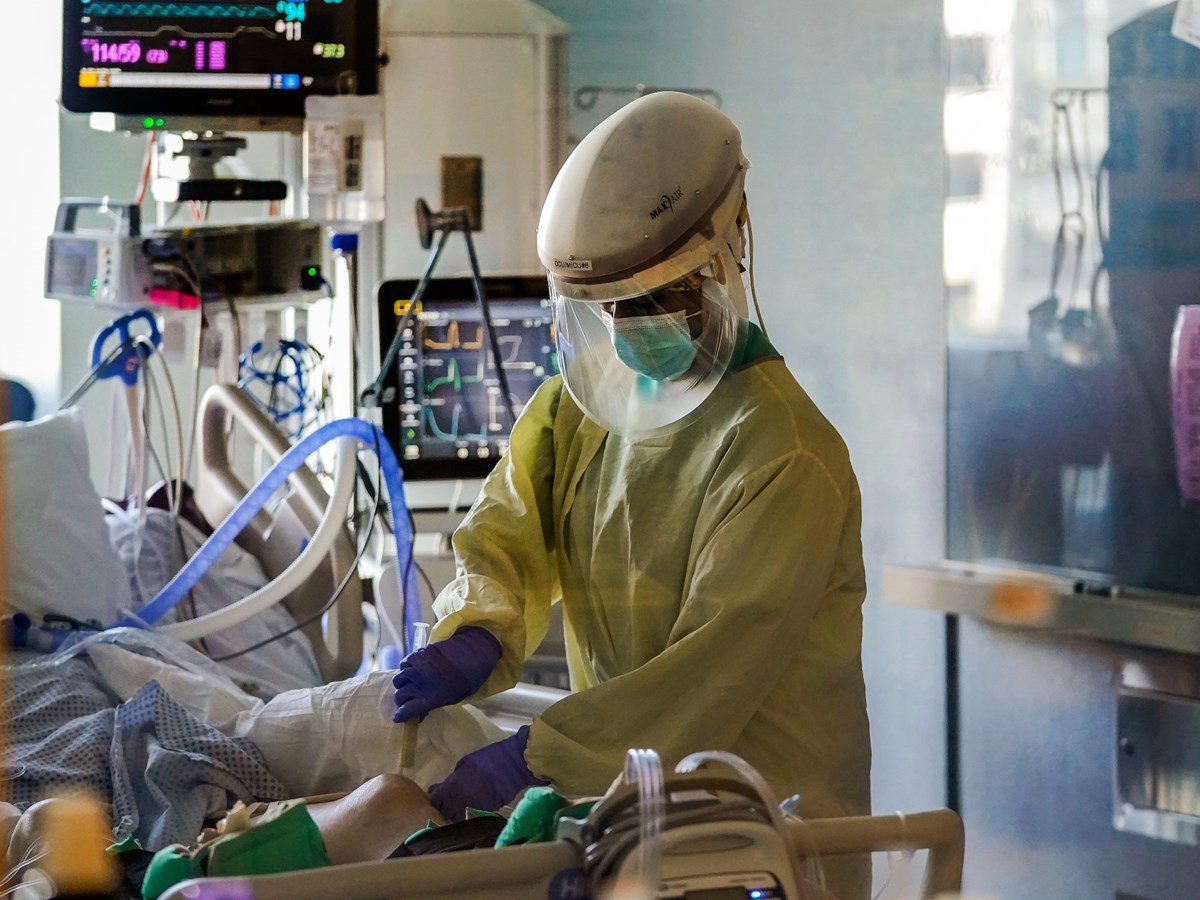 FILE - In this Wednesday, Jan. 13, 2021, file photo, a healthcare worker tends to a COVID-19 patient in an intensive care unit during the coronavirus pandemic in San Jose, Calif.

BY BARBARA FEDER OSTROV AND ANA B. IBARRA, CalMatters

Propelled by the delta variant and large numbers of unvaccinated people, COVID-19 patients are flooding California hospitals at a rate not seen since last winter’s surge.

Hospitalizations statewide have almost doubled in the past two weeks: 5,358 people were hospitalized with the disease on Sunday, compared to 2,781 on July 24.

Tuolumne, Lake, Butte, Tulare, Santa Cruz and San Luis Obispo counties saw a 200% or more increase in the 7-day average number of hospitalizations between July 24 and Aug. 7, according to a CalMatters analysis. But hospitals in all California counties are experiencing worrisome surges.

In Santa Cruz County, COVID-19 hospitalizations rose from 3 to 14 patients in the past two weeks. The county on Monday reported its first two deaths attributed to the virus since May, both patients in their 70s. The vast majority of hospitalized patients are unvaccinated, said Dr. Gail Newel, the county’s health officer.

“It’s obviously frustrating,” said Vollmer, an infectious disease specialist and regional epidemiologist for Kaiser Permante’s Northern California region. “If we’ve learned anything, it’s that we have to remain humble throughout this pandemic.”

New cases have spiked particularly at hospitals in communities with lower vaccination rates, Vollmer said, and patients are skewing younger as many older Californians have been immunized.

Kaiser Permanente has already postponed a small number of elective surgeries depending on patient loads and staffing, but has not done so systemwide, Vollmer said.

Del Norte, the state’s northernmost county — which already has minimal intensive care units to begin with — had zero ICU beds available as of Sunday, state data showed. The county is home to about 28,000 people.

Yuba, Tuolumne and Placer counties in the Central Valley have the highest per capita hospitalizations. (CalMatters’ analysis excludes counties with fewer than 50,000 people, such as Del Norte and Amador, because of their small sample size.)

“Our staff is disheartened to see our community weathering another COVID-19 surge, especially since vaccines that could have prevented this surge in hospitalizations are widely available,” a spokesperson with Adventist Health Sonora in Tuolumne County said in an email Monday.

“It’s true that Adventist Health Sonora staff are worn out, having gone above and beyond over the last 17 months of frontline pandemic response, but they remain well-prepared to care for our community, with ample supplies and experience gained over the course of the pandemic.”

Newel said she, too, is concerned about exhausted hospital workers who were just starting to take much-needed time off this summer.

“Staffing isn’t at optimal levels at any of the hospitals (in the county). We’re watching the situation closely,” she said.

In a letter last week, Dr. Carl Schultz, Orange County’s emergency services medical director, told local hospitals that they were closing their emergency rooms for too long, forcing ambulances to drive around seeking an open bed. Five hospitals closed their emergency rooms longer than an hour in a single 24-hour period. “This is not sustainable,” he wrote.

California’s per capita rate of hospitalizations — surging from about 7 per 100,000 people two weeks ago to about 14 now — is substantially lower than the national rate of 19 per 100,000. But it’s higher than the rate in 29 states, including New York, Michigan and Ohio.

Amador, in the Sierra Nevada region, has a hospitalization rate similar to its peak last December. More than half of the cases are among people younger than 50, and the youngest patient is in their 30s, county officials said in a news release last week.

In Yuba County — which takes patients from smaller, neighboring counties that don’t have their own hospitals — the hospitalization rate was 46.1 per 100,000 people as of Sunday. It was the second highest in the state, shooting up 81% in two weeks.

Health officials said the uptick is a result of more people traveling and socializing after the state’s June 15 reopening. Recent Yuba County infections have been traced to gatherings where the majority of participants were unmasked and unvaccinated, according to Meghan Marshall, the county’s Health and Human Services deputy director.

While cases and hospitalizations are rising in this fourth wave, deaths have remained mostly stable.

On Friday, 33 people died from COVID in California, according to state officials. The 7-day average was 0.04 deaths per 100,000 people on Sunday, similar to about a month ago.

“If we can get people to mask indoors, get tested when they feel sick and emphasize vaccination – if people can own it for a little longer – we should see hospitalizations peak over the next week or two,” Vollmer said. “We’ll see.”