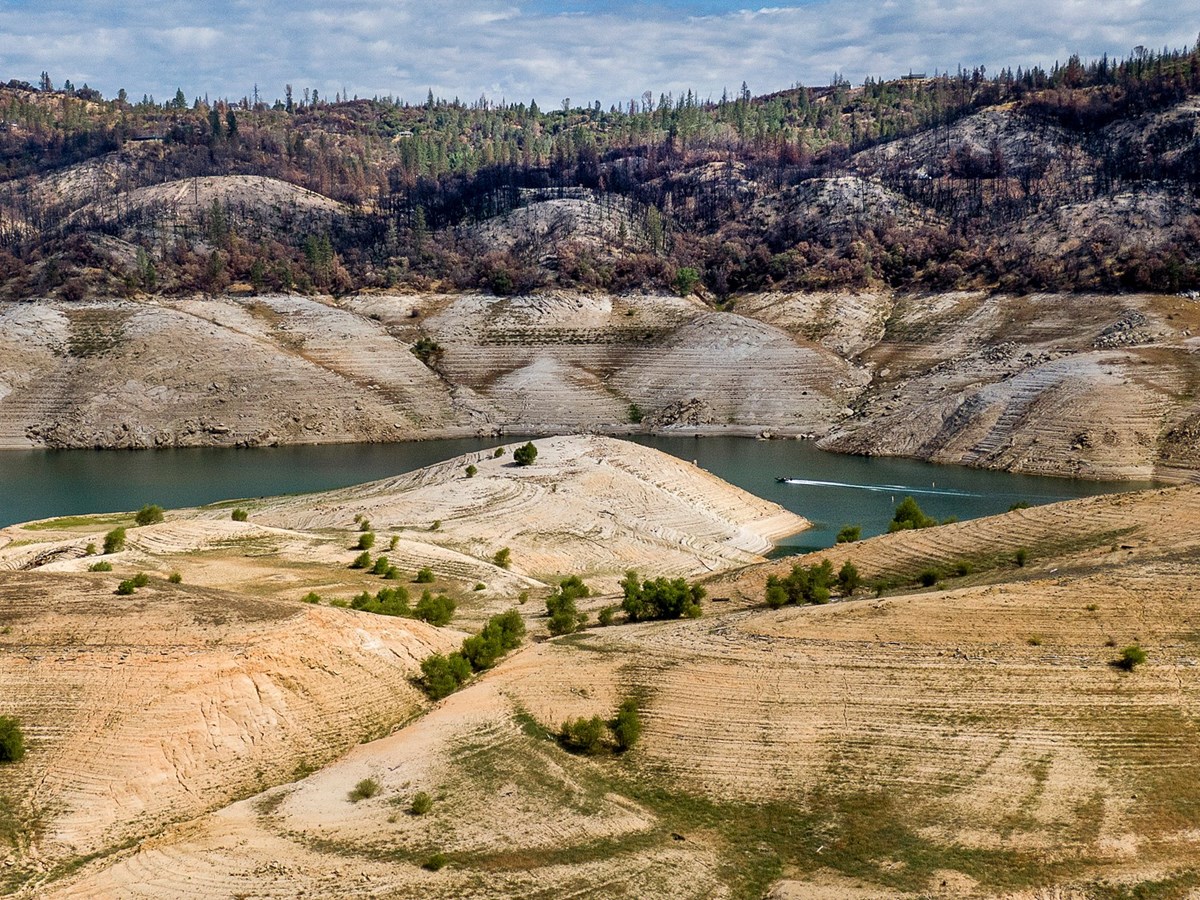 A boat crosses Lake Oroville on May 23, 2021. At the time, the reservoir was at 39% of capacity and 46% of its historical average, creating water shortages.

In an aggressive move to address “immediate and dire water shortages,” California’s water board today unanimously approved emergency regulations to temporarily stop thousands of farmers, landowners and others from diverting water from from the Sacramento-San Joaquin Delta watershed.

The new regulations — the first to take such widespread action for the massive Delta watershed stretching from Fresno to the border with Oregon — could lead to formal curtailment orders for about 5,700 water rights holders as soon as Aug. 16. The decision comes on the heels of curtailment orders issued to nearly 900 water users along the drought-stricken Russian River, with 222 more expected next week.

The five water board members, who were appointed by Gov. Gavin Newsom or former Gov Jerry Brown, approved the rule despite vehement opposition from representatives of Central Valley growers.

Sen. Shannon Grove, a Republican from Bakersfield, said the regulation would “disrupt the critical production of essential food…Instead, the state should focus on expanding water storage and upgrading its existing water infrastructure, not punish local water managers.”

Assemblymember Adam Gray, a Democrat from Merced, called the curtailment orders for senior water rights holders “one of the most destructive measures possible.”

“The Board’s legal authority is by no means certain,” Gray wrote to the board. “Growers will have to risk significant fines and penalties just to find out whether the Board actually has the authority it claims. Either way, they lose.”

Water users who continue to divert could face penalties of up to $1,000 per day plus $2,500 per acre-foot of illegally diverted water, according to Erik Ekdahl, deputy director of the board’s division of water rights.

Most of California is experiencing an extreme drought, with May and June the warmest and driest on record since 1896. Lake Oroville, one of California’s largest reservoirs, is expected to reach a new historic low in October.

Demand for water from rivers and streams has outstripped supply 16-fold in the San Joaquin River watershed and three-fold in the Sacramento River, according to State Water Resources Control Board staff. Dwindling flows risk salty backwash from the Pacific tainting supplies for drinking, farmers and fish.

Karen Ross, secretary of the California Department of Food and Agriculture, told the water board that “this year there’s plenty of pain to go around.

“Mother Nature and climate change have brought us the situation that we have. And therefore the decisions that you have to make have very real impacts on people. But not making these decisions would have even more horrendous impacts for people,” Ross said.

However, six growers organizations, including the California Farm Bureau and the Almond Alliance of California, said in a comment letter that the board does not have authority to curtail the rights of users with claims for properties next to waterways or that pre-date 1914 — the year California enacted its water rights law.

“Treading lightly there is probably a good idea on a prudential basis,” Chris Scheuring, senior counsel for the California Farm Bureau, said at today’s meeting. He also warned that smaller growers “could run afoul of an order or something in a very inadvertent way. We don’t want draconian penalties there.”

“There’s a face behind all of this,” he said. “And those faces actually include my family.”

Irrigation districts also warned that the water board acted too quickly and may have violated due process.

“It’s just too fast, you’ve got to listen to stakeholders in this process,” said Valerie Kincaid, a water law attorney who represents the San Joaquin Tributaries Authority, a coalition of irrigation districts and water agencies. “We now have a draft regulation that exceeds water board authority.”

A similar critique came during the last drought when, in 2015, six irrigation districts sued the state over its efforts to stop some Delta diversions. A Superior Court judge ruled that the state violated their due process by failing to give them a “meaningful opportunity, including some form of public hearing, to challenge the board’s finding before they are ordered to curtail their water use.”

This time, state officials said at a July workshop that they were giving ample notice and opportunity for input. They said the governor’s drought emergency declarations ensured they were “on very firm legal footing.”

Some residents, however, urged the water board to act quickly. One Shasta County resident, Diane Bond, wrote that because of heavy diversions, a critical creek in the region is all but dry. She urged the board to consider stopping all diversions regardless of seniority.

“We have no water for fire suppression and the fish and wildlife are dying. We have put out water for the wildlife near our property. It is heart-wrenching to see our creek dry,” Bond wrote. “These are desperate times and water is so scarce.”

A representative of the Westlands Water District, which relies on stored federal water supplies that flow through the Delta, said he supported the water board’s regulations.

“They will protect transfer water that’s been acquired to help mitigate, in part, the impacts of drought,” said Jon Rubin, assistant general manager and general counsel. “They will also help protect stored water and for those reasons Westland supports the resolution that’s been presented.”

Supplies of up to 55 gallons per person per day for minimum human health and safety needs, such as drinking and household use, are exempted from the curtailments.

The City of Vallejo urged the water board in a public comment letter to increase the 55 gallon cap, or change the way it’s calculated. The limit is “too rigid,” said Vallejo water operations manager Beth Schoenberger “and will be very difficult to implement in areas without a firm population count.”

Small community water systems and the Merced County Hispanic Chamber of Commerce warned in letters to the board that without surface water, growers may fall back on groundwater wells sucking from already depleted basins.

“I urge you to consider that this will result in local wells under producing or simply not producing at all, as well as reduced overall water quality,” Daniel Chavez, district manager for the Planada Community Services District, wrote.