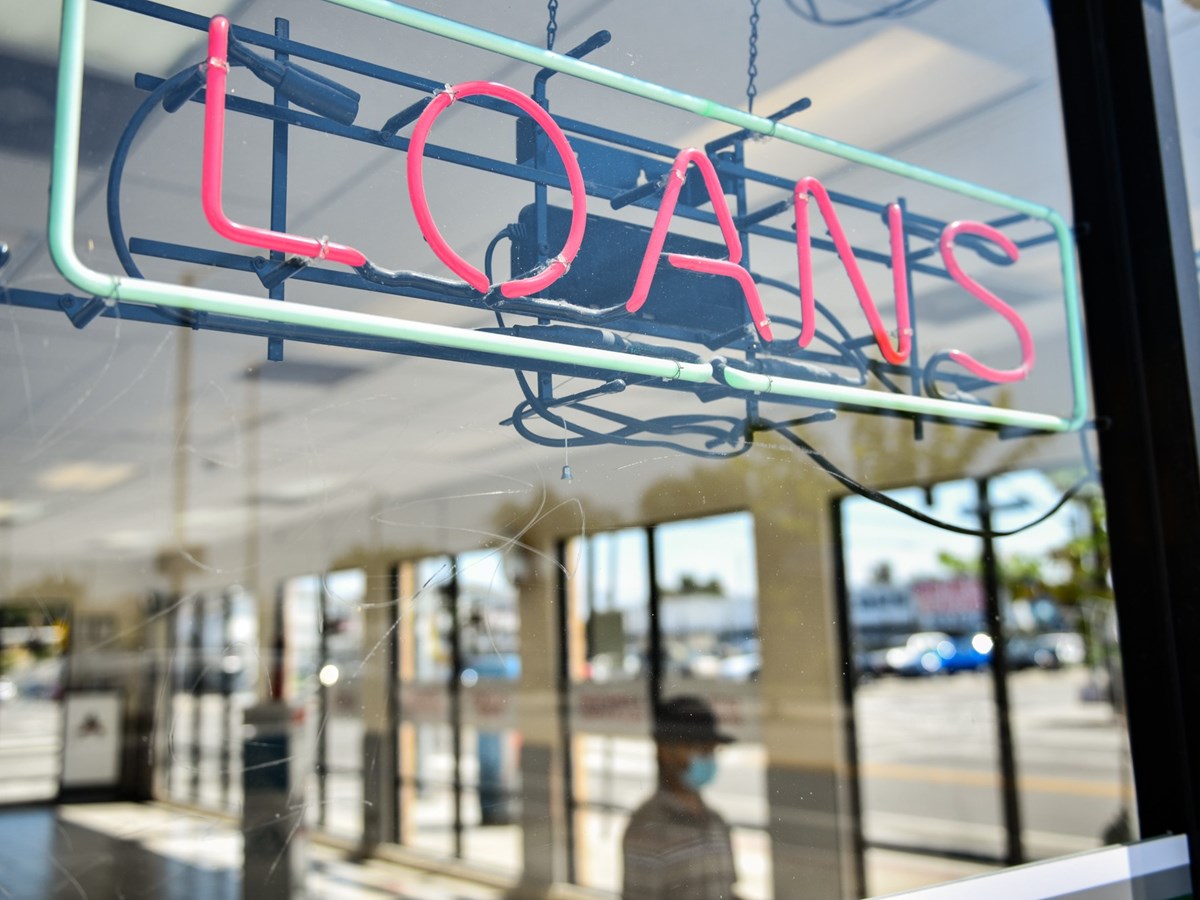 A customer inside a loan agency, ACE Cash Express, in Wilmington on July 28, 2021.

Pandemic government assistance may have helped some Californians avoid using expensive payday loans last year, but some experts say it might be too early to celebrate.

Despite the unprecedented job loss triggered by the pandemic last year, government-funded financial aid was enough to acutely impact the payday loan industry, according to the California Department of Financial Protection and Innovation. The new state department released the report last week as part of its ongoing effort to regulate and oversee consumer financial products.

The report comes on the heels of California’s new $262.6 billion budget, with multiple programs aimed at reducing economic inequality within the state. An unprecedented $11.9 billion will be spent on Golden State Stimulus payments, a one-time benefit not set to continue in years to come.

“With those benefits going away, we do expect there to be potentially an uptick (in payday loans),” said department spokesperson Maria Luisa Cesar.

Industry representatives, state regulators and consumer advocates agree: government assistance helped Californians avoid their reliance on payday loans—short-term, high-interest loans that must be paid back in full when borrowers get their next paycheck. Additional reports found that California’s trend mirrors trends in other states.

Thomas Leonard, executive director of the California Financial Service Providers Association, said that 2020 was a difficult year for the industry because the pandemic changed how consumers managed their finances. His association represents providers of small-dollar consumer loans, payday loans, check cashing and other consumer financial services.

“Demand for small-dollar loans dropped precipitously in 2020, as many consumers stayed home, paid down debt, managed fewer expenses, and received direct payments from the government,” Leonard said in a statement.

On the other hand, Cesar said that the drop in payday loan use is not necessarily indicative of Californians doing better financially.

“That’s just too simplistic of a picture,” she said. “Cash relief efforts were able to help consumers make ends meet, but folks are not out of the woods.”

Marisabel Torres, the California policy director for the Center for Responsible Lending, said that despite the impact pandemic relief had on Californians, some of those programs already have an end date. California’s eviction moratorium, for example, is scheduled to end Sept. 30. The rollout of rental assistance has been slow. Tenants with unpaid rent are facing potential eviction for those who can’t afford to pay rent.

Once those programs go away, Torres said, people will continue to need financial assistance.

“There is still this large population of people that will continue to turn to these products,” Torres said.

With the exception of last year, the report showed that the usage of payday loans has remained stable for the last 10 years. But the use of payday loans doubled in the years following the Great Recession.

The state report provides no context about how consumers used payday loan money in 2020, but a study by the Pew Charitable Trust in 2012 found that 69% of customers use the funds for recurring expenses including rent, groceries and bills.

Almost half of all payday loan customers in 2020 had an average annual income of less than $30,000 a year, and 30% of customers earned $20,000 or less a year. The annual reports also consistently show higher usage among customer’s making more than $90,000 per year, though the financial oversight department wasn’t able to explain why.

“Basic necessities, like groceries, rent…To live life, you have to pay for these things,” Torres said. “Anything that alleviates that economic pressure is helpful to folks.”

Lawmakers throughout California have begun establishing pilot programs that would alleviate some of that economic pressure. Stockton was the first city to experiment with guaranteed income for its residents. Compton, Long Beach and Oakland followed suit through the national Mayors of Guaranteed Income effort. California approved its first guaranteed income program earlier this month.

Payday loans are considered some of the most expensive and financially dangerous loans that consumers can use. Experts say that the drop in usage last year is good for Californians, but the industry still lacks necessary regulation to lower the risk of the loans for low-income consumers.

California lawmakers have an extensive history of attempting to regulate predatory lending in the state, but have failed to enact significant consumer protection from payday loans. The most notable legislation passed in 2002, when California began requiring licences from lenders. It also capped payday loans at $300.

Unlike other forms of borrowing, a payday loan is a short-term loan where the borrower promises to pay back the money with their next paycheck. While lenders charge fees instead of interest rates, state regulators require disclosing in terms of interest rates to point out how expensive this form of borrowing is for consumers. When annualized, these loans averaged a whopping 361% in 2020.

In addition to exorbitant interest rates, one of the industry’s major sources of income is fees, especially from people who serially depend on payday loans.

A total of $164.7 million in transaction fees — 66% of the industry’s fee income — came from customers who took out seven or more loans in 2020. About 55% of customers opened a new loan the same day their previous loan ended.

After multiple failed efforts in years past to regulate the industry, California legislators aren’t pursuing major reforms this session to fight the industry. Torres called for continued legislation efforts that would cap interest rates as a way to alleviate what she calls the debt trap.

“It is wild to think that a policymaker would see that and say, ‘This is okay. It’s okay for my constituents to live under these circumstances,’’ Torres said. “When it’s actually in the power of California policymakers to change that.”

There is evidence that the decrease in payday activity correlates with COVID-19 relief efforts. While there are a number of factors in the decrease, they likely include the distribution of stimulus checks, loan forbearances and growth in alternative financing options. Most commonly known as “early wage access,” the new industry claims it is a safer alternative.

The companies lend a portion of a customer’s paycheck through phone applications and don’t charge interest fees. The product is not yet regulated, but the state’s financial oversight agency announced that it will begin surveying five companies that currently provide the service.

The problem with this model, according to Torres, is that there is no direct fee structure. To make a profit, the apps require customers to leave a tip for the service.

“Unfortunately, that tip often clouds how much the loan ultimately costs you,” Torres said, adding that some companies go as far as using psychological tactics to encourage customers to leave a large tip.

“Customers voiced relief to know our industry was still here for them during the most trying circumstances and we have been proud to be there during this time of need,” Leonard said.

Despite last year’s drop in activity, 1.1 million customers borrowed a total of $1.7 billion dollars in payday loans last year, 75% of them returning for at least one more loan within the same year.

Torres said that the Center For Responsible Lending is continuing to work with legislators to write bills that would cap interest rates to make payday loans more affordable. Requiring lenders to assess the customer’s ability to pay the loan would also prevent customers from falling into a debt trap, she said.

“They act like they are providing this life saver to somebody,” Torres said. “That is not a lifesaver. They are tying (customers) down with an anchor.”

For the record: A previous version had the wrong year for when California capped payday loans. It was 2002. The story has also been updated to clarify how payday loans work and how borrowing costs are disclosed to consumers.