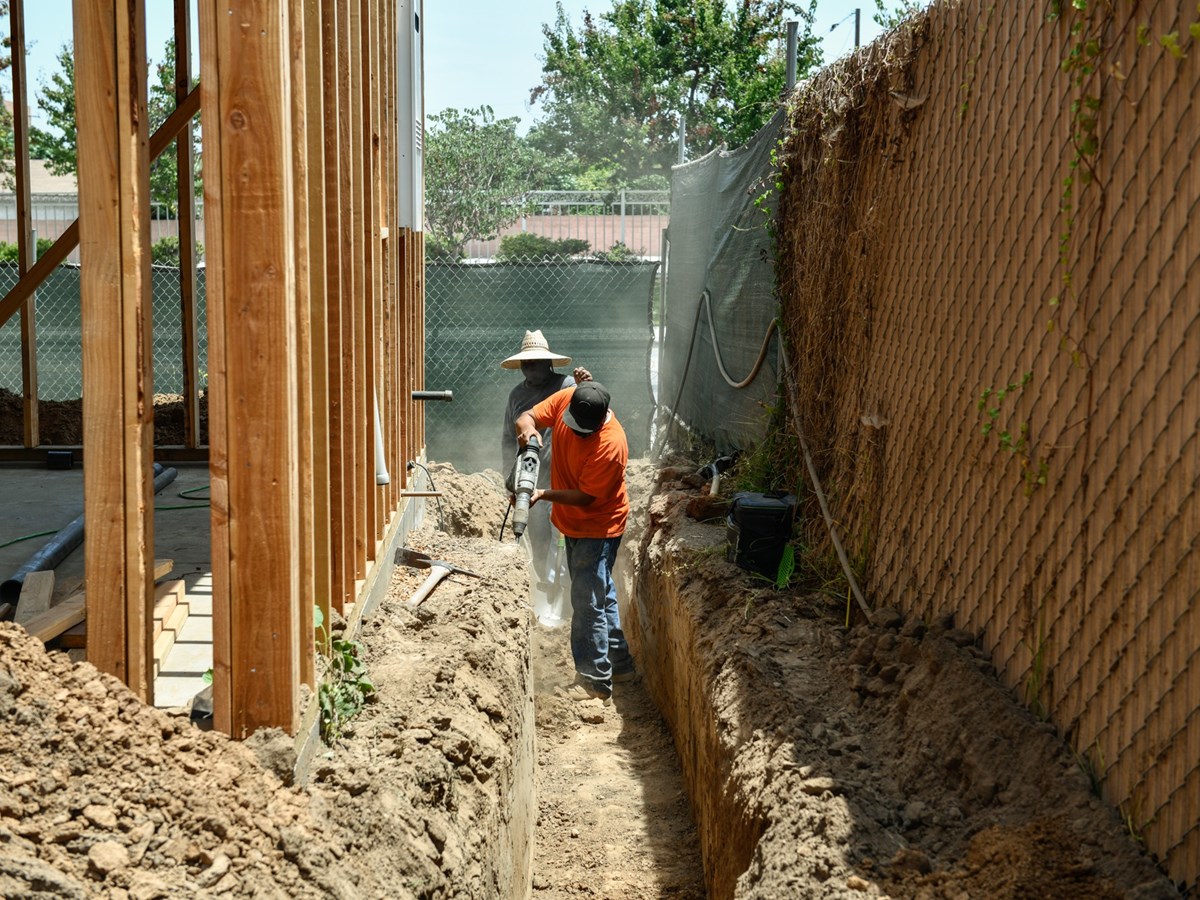 Construction workers break down dirt at an affordable housing job site in Long Beach, on July 22, 2021.

Encouraging housing to be built in place of abandoned big box stores and strip malls. Making it easier to build student housing near community colleges. Establishing an authority in Los Angeles to finance affordable housing.

These proposals all promise to ease California’s ever-worsening housing crisis by adding or preserving the already-scarce supply.

But these bills also appear to be dead in the water.

They missed a key July 14 deadline to be heard in a policy committee in the state Assembly before lawmakers went on a month-long summer recess until mid-August. It’s still possible to revive the measures before the session ends in mid-September, but doing so would require a rules waiver — and political willpower.

So if lawmakers have stated time and again that easing the state’s housing affordability crisis is their top priority, and these are some of the solutions, what’s the hold up?

As often happens in the Legislature, it’s impossible to say for certain, and key players remain tight-lipped. But several observers of the housing debate noted a significant similarity among the bills: They all require that a portion of the workforce that builds the housing be graduates of mostly union-run apprenticeship programs.

That union labor requirement has proven to be a deal-breaker or deal-maker for several housing bills already: The provision made it into bills and allowed them to survive so far. Or it was excluded and resulted in strong opposition and a bill’s demise, including one last year to build affordable housing in church parking lots, and another retail-to-housing conversion effort similar to the bill now in limbo.

The requirement is a source of tension between the powerful State Building and Construction Trades Council — which represents more than 450,000 California construction workers and wants more jobs for its members — and affordable housing developers, who are hoping to build many of the proposed projects.

“This question of good jobs versus affordable housing is a false question,” said Lola Smallwood Cuevas, a project director at the UCLA Labor Center. “It’s a question that has been living for 15 years that cannot afford to live on.”

Negotiations between the two groups hit a wall in January; CalMatters reported in June that developers hoped legislative leaders would help break the stalemate.

Instead, Assembly Speaker Anthony Rendon, a Lakewood Democrat, is standing up to the Trade Council’s hard-nosed approach by holding up the bills, according to several lawmakers and legislative staffers, speaking on the condition of anonymity because of the sensitivity of the negotiations.

Two of the bills in limbo are in the housing package proposed by Senate leader Toni Atkins, a San Diego Democrat: Senate Bill 6 to allow housing in commercial zones and SB 330 to create workforce and student housing in community college districts. Several other bills in the Senate package also include the union language, including SB 7, which Gov. Gavin Newsom signed into law to expedite environmental review on larger projects, including affordable housing.

Two other high-profile bills in the Atkins package — SB 9 to allow duplexes and lot splits in areas zoned for single-family homes and SB 10 to let cities authorize more dense housing development near transit — aren’t affected by the labor provision because they only cover smaller projects.

Sources said that talks are ongoing between Rendon, Atkins and the Building and Trades Council, known as “the Trades.” 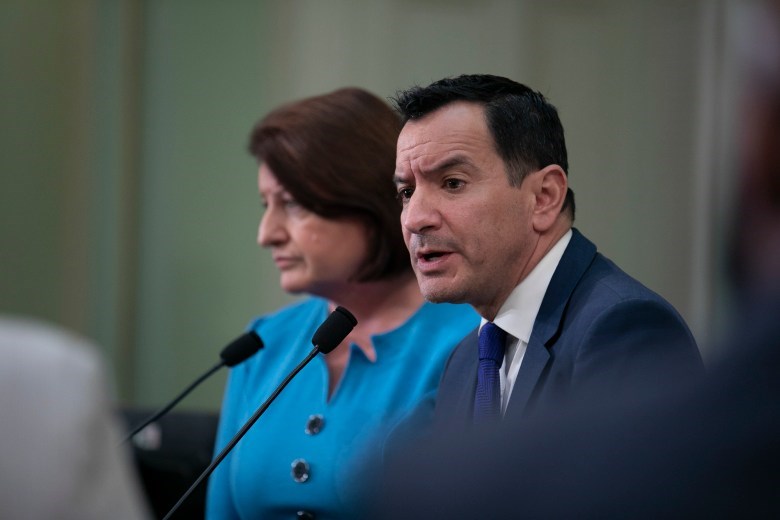 Both Rendon and Atkins declined to comment for this story. Trades spokesperson Erin Lehane said she knew nothing about a conflict with leadership over the labor language, and her group had not been part of any discussions.

“I’ve really no idea,” Lehane said. “Nobody’s told me that there’s any issues with these bills.”

But the holdup could be about more than just policy. Several sources said the Trades got sideways with Rendon when they funded attack ads in 2018 against Assemblymember Cristina Garcia, a Bell Gardens Democrat with whom they had also sparred over energy policy. The Trades, along with affiliated local unions, has given more than $90 million to state candidates and campaigns since 2015

Bill Wong, a senior political adviser to Rendon, said it’s possible those tensions have lingered: “It’s like when couples argue about things from the past not relevant to the argument at hand. I think it’s human nature.”

Wong, however, warned against reading too much into the missed deadline. He said contentious bills typically make it unscathed through the chamber where they were introduced, while the more difficult policy debates take place in the other house before they get to the governor’s desk.

“It’s the nature of negotiations,” he said. “We’ve got approximately four to six weeks left in session. You know, if I’m the Trades, I want to get the best deal I can, which means, if I cut a deal today, and my members are saying, ‘Well you had six weeks to get a better deal, why didn’t you go all the way to the bitter end?’ ”

Trades Council President Robbie Hunter, who has been at the helm of these discussions, announced his retirement at the end of June, shortly after the CalMatters story and a Politico story about lawmakers’ frustration with his negotiating tactics.

But Lehane said that Hunter could stay on the job through the end of the year and laughed off a question about the timing: “Everybody was looking for so much reading on it. It was funny. I think it surprised a lot of people but it really is just, he wants to have some time for himself.”

At issue is the bills’ “skilled and trained” language that states at least a third of the employees in each trade (plumbers, bricklayers, etc.) working at a job site must be graduates of an apprenticeship program. That mostly benefits the Trades’ members, as unions run about 90% of such apprenticeships.

The council is pushing the requirement because they say non-union construction workers barely float above the poverty line while graduates of apprenticeship programs earn higher wages over the course of their careers.

Affordable housing developers, on the other side, say a tiny fraction of construction workers are unionized — so the requirement would constrain an already-tight labor pool and raise costs. Besides, they argue, many state laws already require that they pay union-level wages, unlike market-rate developers.

It’s a chicken-and-egg scenario: Unions say they can’t recruit more members through apprenticeships if they can’t guarantee jobs, but developers say they can’t build housing if there aren’t enough workers. 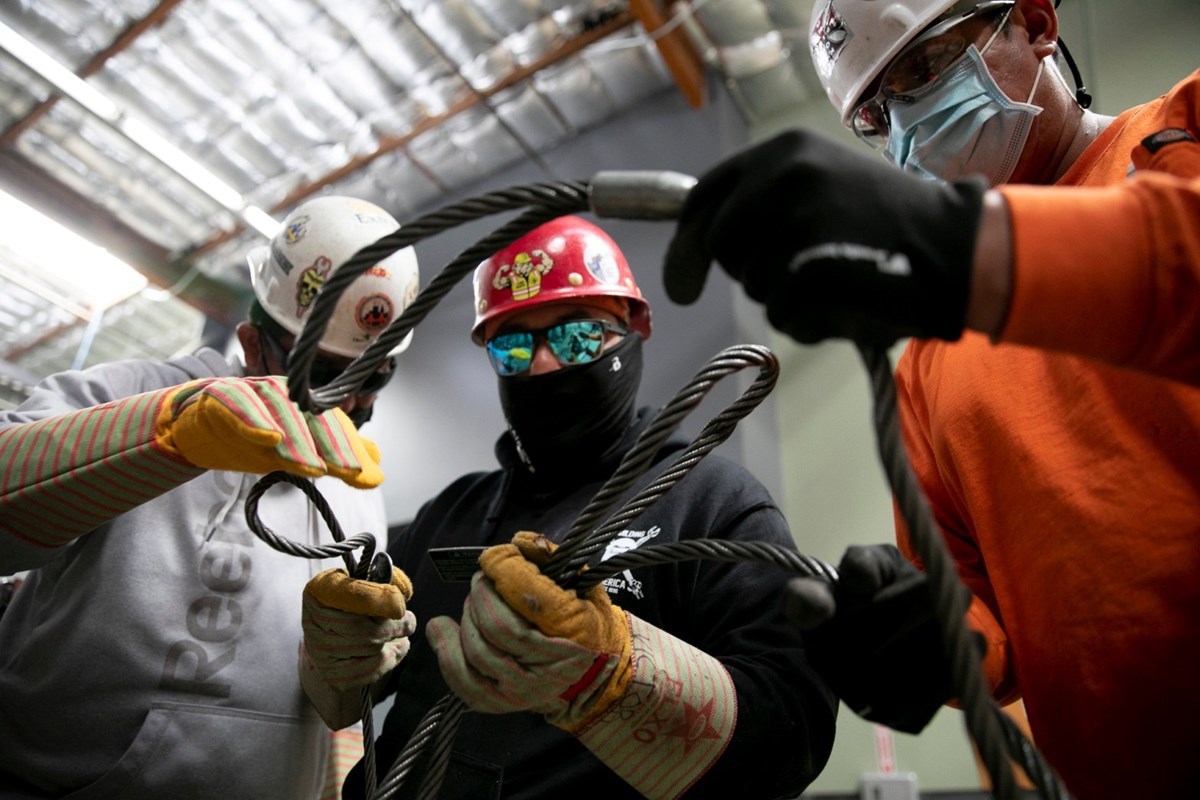 Lehane insisted the “skilled and trained” language wasn’t a problem, pointing to the bill Newsom signed into law and Assembly Bill 777, which would allow the state to transfer land in Sacramento to UC Davis to construct much-needed affordable housing for students. The labor requirement was added to the bill at the last minute, in the Senate.

Assemblymember Kevin McCarty, a Sacramento Democrat and the bill’s author, attributed the timing of the amendment to “due diligence and evaluating what this language would mean as far as trying to find contractors to do work here.”

“I would think that in some of the other bills there’s questions as far as the impact,” he said. “But in my case here, I came to the undeniable conclusion that this language will not hold back what we’re trying to accomplish at UC Davis for increased student housing at the Med Center campus.”

Another bill in limbo that has the union requirement, SB 679, would establish an authority to finance affordable housing in Los Angeles.

According to the most recent state data, there’s about one unionized construction worker for every three needed affordable housing units in Los Angeles County. That ratio matters because research shows it takes roughly one worker to build each unit of housing. And while the goal is to build up the workforce over time, mostly union members would be immediately eligible to start building under these bills.

Under state law, L.A. County must plan for 340,000 housing units by 2030 that are affordable to low- and very low-income households.

“It took us a little bit to realize that the bill was being held in a sort of purgatory,” said Tommy Newman, a senior director at the nonprofit United Way, which sponsored the bill. “We assume that the reason relates to the larger debate around labor requirements.”

The bill’s author, Democratic state Sen. Sydney Kamlager, who represents most of downtown and South Los Angeles, said the bill checks all the boxes to pass. It has 10 co-authors in the Legislature; it is a top priority for the 39-member Los Angeles delegation; and it has support from Bay Area legislators, who don’t typically see eye to eye with their Los Angeles counterparts on housing issues.

“So, there’s no tension there,” said Kamlager, who leads the L.A. delegation. Instead, she pointed to a Los Angeles Times editorial that highlights the same conflict with the Trades.

If the “skilled and trained” provision really is the problem, she said, it seems irrelevant, because the bill is about creating an agency to finance housing projects — not build them. The new agency, she said, “won’t have any trained workers, so I don’t know if it makes sense to have that kind of detail in this bill.”

“But I do think that it is time for us to have more honest and deliberate conversations about what our workforce looks like in Los Angeles,” she added. “What experience and training do they currently have and how do we get folks into these kinds of jobs? What are all the different levers and mechanisms we should be tapping into and using? But this bill is not that bill.”

Maybe it should be, said UCLA’s Smallwood Cuevas, who is also director of the Los Angeles Black Worker Center.

“We have to build on targeted local hire and apprenticeship, and overlay that with very intentional language and structure that ensures that those communities most marginalized get access,” she said.

She pointed out that while Black people comprise less than 8% of Los Angeles residents, they are 34% of the homeless population. She believes the bill should help people on the verge of homelessness get into construction of affordable housing so that they can afford rent and build a career.

Kamlager said she would be open to whatever is necessary to move the bill forward, as long as stakeholders are involved in the discussions. While she hasn’t been involved so far, she is counting on Atkins: “I am putting my faith in her.”