No, California Does Not Have A Personal Belief Exemption For COVID-19 Vaccines For Kids

A prominent California anti-vaccination group recently posted an image on Instagram falsely claiming that the state has a personal belief exemption for any new vaccine mandated for children attending school.

“Share everywhere because you will not be told by doctors or schools,” the image reads. “California has a personal belief exemption to any new vaccine added to the schedule after June 2015 for public and private daycare, preschool and K-12.” 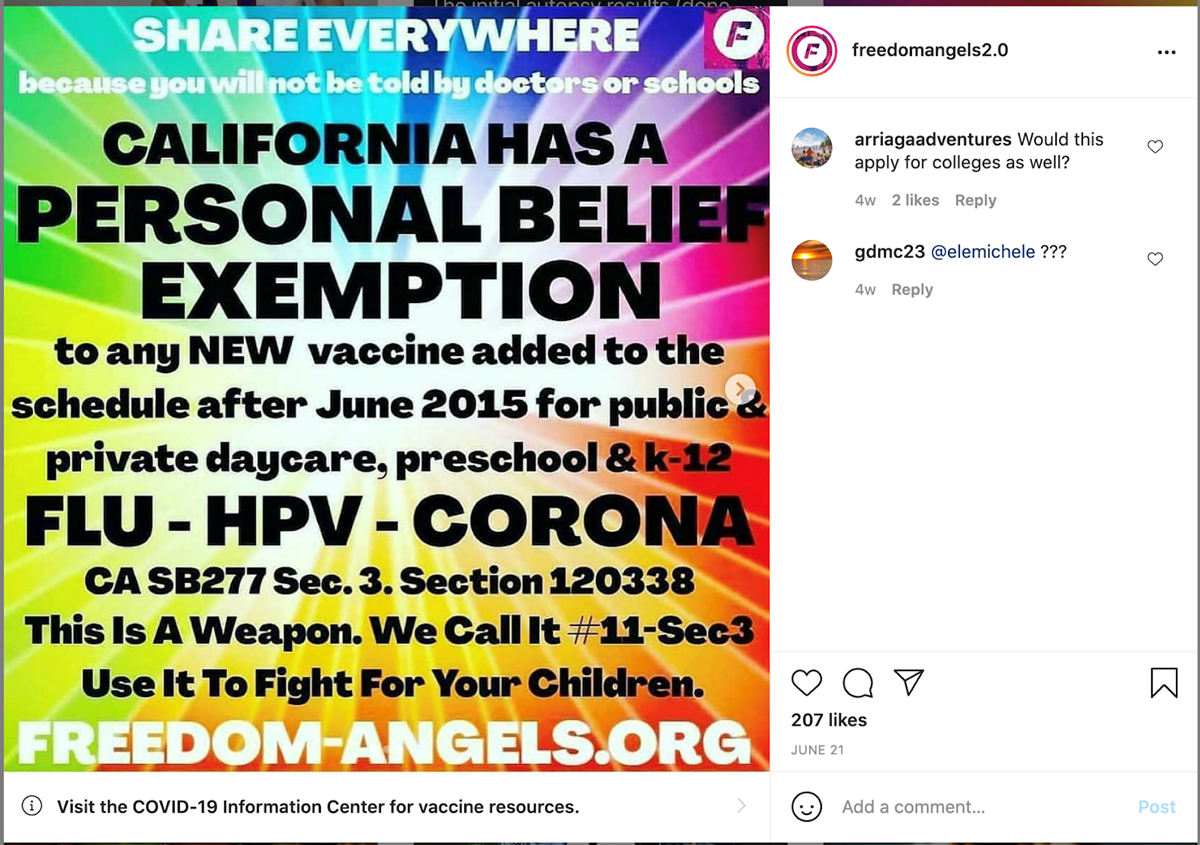 The image was posted on June 21 by members of Freedom Angels, an anti-vaccination organization founded by a trio of women in 2019. It falsely cites California Senate Bill 277, which was passed in 2015.

“Use it to fight for your children,” the image reads.

A post from Denise Aguilar, one of the founders of the group, racked up more than 6,500 likes and hundreds of comments. Aguilar also shared the image in a private Telegram channel, where it was viewed by almost 2,000 people. Tara Thornton, another founder, shared the image on her page, garnering more than 250 likes.

Both women shared the image in both Spanish and English. Additionally, the image was shared via a secondary account for Freedom Angels, which appears to have multiple accounts on Instagram.

Facebook flagged the image as part of its efforts to combat false news and misinformation on its News Feed. (Read more about PolitiFact California’s partnership with Facebook.) We decided to find out whether the image’s claims are accurate.

A history of California vaccination laws

Senate Bill 277 was introduced in the aftermath of an outbreak of measles at Disneyland in 2014. It’s primary author was state Sen. Richard Pan, a Democrat representing Sacramento and Yolo counties and a pediatrician.

Until then, California had technically required these vaccinations for school-aged children but had allowed parents to opt out for any reason with personal belief exemptions, making it one of the more lenient states in the country for vaccination mandates.

When the law was passed in June 2015, it became one of the toughest vaccination mandates in the nation. Without a medical exemption, the only way parents could opt out of vaccinating their children was to home-school them or enroll them in an independent study program without classroom instruction.

The measure was contentious and drew large crowds of parents against vaccinations to Sacramento to voice their displeasure. Pan and co-author state Sen. Ben Allen (D–Santa Monica) both reported receiving death threats while the bill was being debated.

Pan argued that the law would help boost immunization rates and help prevent outbreaks similar to the one at Disneyland, which ultimately infected more than 150 people from eight different states, Mexico and Canada.

Four years later, Pan introduced another bill in response to rising medical exemption rates statewide. The bill, which ultimately passed, cracked down on medical exemptions by creating a review process that gave public health officials the final say on waivers.

It was accompanied by weeks of protest, some of which were so large and vocal that they shut down activity in the state Capitol building. Critics claimed the law would shut down access to waivers for kids who needed them and that doctors would fear the law’s investigative process.

What does SB 277 mean for flu, HPV and COVID-19 vaccinations?

The image claimed that SB 277 includes a clause that establishes personal belief exemptions for any new vaccine mandated for children attending school.

Once the vaccines are fully approved for young children, it’s unclear whether lawmakers will consider adding the COVID-19 vaccine to the schedule of mandated shots.

That means there are currently no personal belief exemptions for these vaccinations, because they are not mandated in the first place. At the moment, parents can choose whether to vaccinate their children against these diseases.

But if those vaccinations were to be added to the state’s list of mandatory shots, experts say a personal belief exemption may not apply — depending on how the new vaccines are added to the list.

Dorit Reiss, a professor of law at UC Hastings and a member of the Vaccine Working Group on Ethics and Policy, said the law included a clause that allows the California Department of Public Health (CDPH) to mandate new vaccinations.

If vaccinations are added to the schedule in this way, the law stipulates that personal belief exemptions must be offered to parents and students.

“New vaccines required — like COVID, flu, HPV — will have a [personal belief exemption] if, and only if, the department of health adds them without going through the legislature,” Reiss said. “If the Legislature adds them, the Legislature will set the terms.”

That means that the state Legislature could choose to pass legislation that adds a vaccination to the current list without offering a personal belief exemption.

“The Legislature may at any time amend or pass a new statute to add a required immunization,” said Brandon Stracener, a senior research fellow at UC Berkeley Law School’s California Constitution Center. “This additional restriction on the department, an executive regulatory agency, reflects a balance between the greater speed with which agencies can react and the more direct voter accountability legislators face.”

SB 277 also included a clause that grandfathered in some children who had personal belief exemptions on file with their schools prior to the passage of the legislation. Stracener said those students are permitted to maintain their exemptions until they enter a new “grade span” when moving from preschool to elementary school or from elementary school to middle and high school.

“This temporary, transitional safeguard will apply to fewer and fewer, and eventually, no students as the years progress,” Stacener said.

It’s unclear whether COVID-19 vaccinations will be required for students in the future, but experts say they expect the legislature would take charge if state officials sought to mandate it.

Reiss said the CDPH has yet to add a vaccination of its own to the list since SB 277 passed in 2015.

“I expect that if it's added, it would be added by the legislature,” she said. “That's how all currently mandated vaccines were added. I think the CDPH would be very cautious of the political implications if it went at this without legislative mandate.”

That means there likely would not be a personal belief exemption.

“The [CDPH] could attempt to deem coronavirus an appropriate disease under these statutes to require immunization,” Stracener said. “But the legislature might have to respond itself if a large enough number of asserted personal belief exemptions made it clear that the legislature would have to act to ensure public safety.”

Posts on Instagram spread by anti-vaccination advocates claimed that California has a personal belief exemption for any new vaccine mandated after the passage of Senate Bill 277.

But experts say this is not the whole story. The law includes a clause that gives the California Department of Public Health the ability to add mandated vaccinations to the current schedule. For vaccinations added this way, the law stipulates that personal belief exemptions must be offered.

The state Legislature can also add vaccinations to the mandated list of shots. If a vaccination is added this way, lawmakers can choose whether they should include personal belief exemptions to the vaccine.

The posts further claimed that these exemptions would apply to flu, HPV and COVID-19 vaccinations, even though those shots have not been added to the state’s list of mandated vaccinations.

It’s unclear whether the COVID-19 vaccination will be mandated for students in California. If it is, experts said they expect the Legislature would take the lead on mandating the shots and it’s likely personal belief exemptions would not apply.

Therefore, we rate this claim False.

The New York Times, Antivaccination Activists Are Growing Force at Virus Protests, May 2, 2020

The New York Times, In the U.S., vaccines for the youngest are expected this fall, July 8, 2021

Email interview with Dorit Reiss, a professor of law at UC Hastings and a member of the Vaccine Working Group on Ethics and Policy, July 8, 2021

The Wall Street Journal, Can Schools Mandate Covid-19 Vaccines for Children? What We Know, July 11, 2021