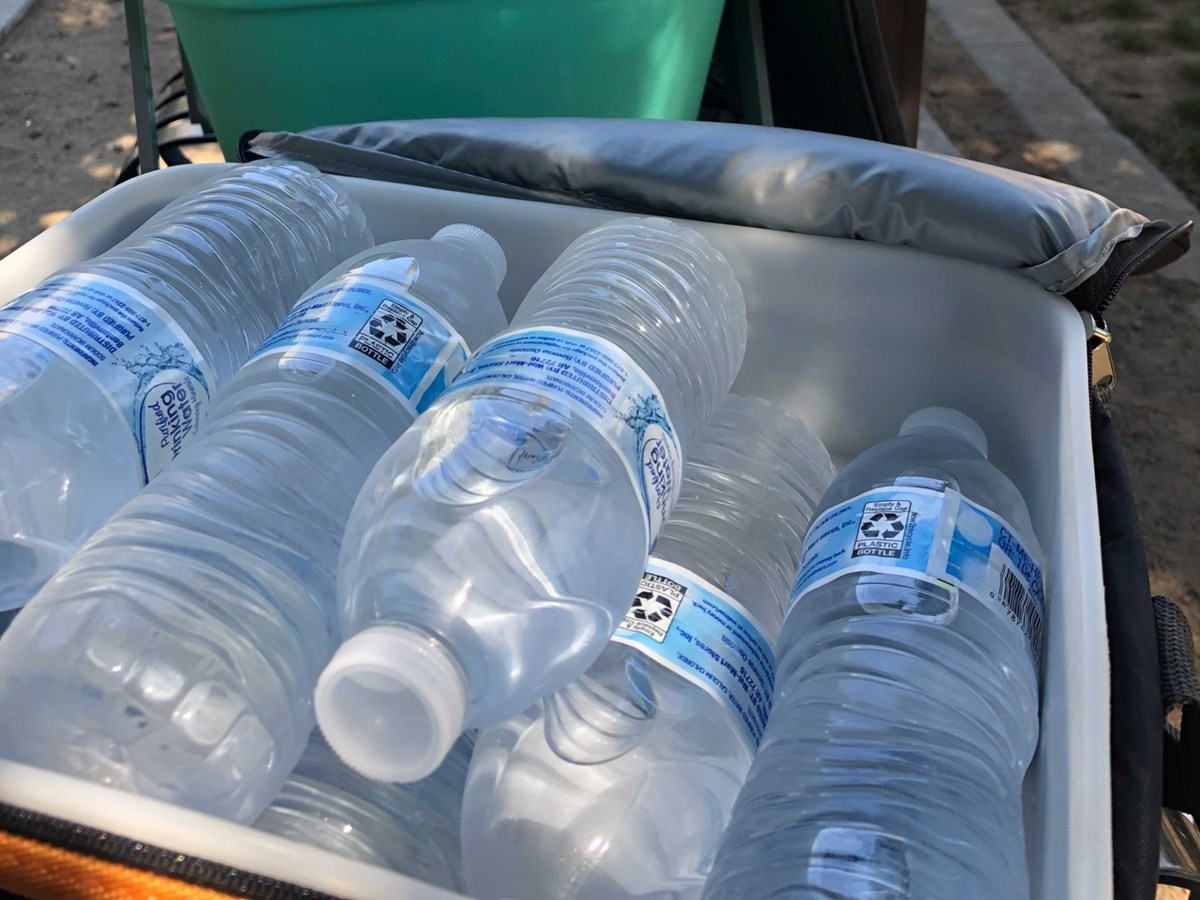 Amy Mattingly brings coolers full of water bottles to hand out to unhoused people in Cesar Chavez Park in Sacramento.

The shade in Cesar Chavez Plaza provides a refuge for people during the rising, record-breaking heat in downtown Sacramento. Staying cool is critical during a heat wave — as is staying hydrated.

But for Sacramento’s over 5,000 unhoused people, accessing that drinking water isn’t always straightforward.

And while Sacramento has 297 drinking fountains, they don’t always provide cold water, for example.

Jeffrey Milner, who is unhoused, said he’s gotten water from people near the downtown library branch and from people giving away water at Cesar Chavez.

“We have some great citizens here because they make sure that we have cold water, on top of giving us food, and make sure at least you’re hydrated,” he said. “They don’t just watch you walk around, even though there’s a water fountain.”

And where someone gets water doesn’t always end up being where they sleep for the night, so their supply needs to be light enough to transport.

“The fact of the matter is, there’s nothing like bottled water,” Milner said.

Safe, accessible water is a human right, according to California’s Human Right to Water Act, passed in 2012.

Angela Hassell is the executive director of Loaves and Fishes, a Sacramento-based nonprofit that provides services to people experiencing homelessness. She said many of the current concerns from guests revolve around obtaining an adequate supply of clean, cold water on a regular basis.

At its center at 1351 North C Street, open Monday through Friday from 7 a.m. to 3 p.m, guests have access to whatever water they can take with them, said Hassell.

“Folks can only take so much with them in a backpack or cart, so you might only be able to carry enough water to hold you through the next 24 to 48 hours,” she said. “After that point, you need to fill up again.”

The nonprofit gives out around 1,500 bottles a week, she said. It’s also been giving out reusable water bottles.

“Whatever we have, we’re giving out every day,” she said.

Hassell said she wants people to understand that the process of getting water can be an ordeal year-round.

“People don't necessarily think of the obstacles that homeless folks have to go through in order to get water,” he said. “Not only drinking water, but to wash your hands, to go to the bathroom, to take a shower.”

In 2018, the Coalition published a report that found that only 24 of the 38 bathrooms in Sacramento parks were open from sunrise to sunset, and that no facilities were available overnight.

“For all the advocacy out of that report, we got one bathroom in Cesar Chavez park,” Erlenbusch said. “That’s better than nothing. But it’s still pretty pathetic, given one bathroom for thousands of people.”

While the pandemic has amplified existing challenges for unhoused people, it has also motivated more people — whether they are volunteering for an organization or not — to distribute what they can to unhoused people around them, according to Hassell.

That includes Amy Mattingly, who put together backpacks with blankets, clothing and water for those who wanted them last winter. Now, she’s handing out water around her neighborhood and at Cesar Chavez. A senior research analyst at Learning Sciences International, Mattingly said that she offers water to whoever she meets.

Helping is a no-questions-asked situation for her: While she isn’t involved in policy, Mattingly said that she can at least improve someone’s situation in the moment.

“I don’t think someone’s situation or circumstances should determine whether they get their basic needs met,” she said. “To someone, this water [I’m handing out] could be the only water they’ve had all day. You don’t need to buy someone a house to help them.”