Students and local organizers hold a press conference July 1, 2021, demanding the immediate removal of a Kit Carson International Academy Spanish teacher who was recorded allegedly using the n-word and defending her use of it.

Berry Accius wants you to know one thing: a Sacramento teacher using the n-word is not a one-time incident.

“We are no longer letting this slide. She must be fired,” Accius, the founder of Voices of the Youth, said at a Thursday press conference.

Students and organizers at a Thursday protest demanded the immediate removal of Kit Carson International Academy Spanish teacher Katherine Sanders after she was recorded allegedly using the n-word, and defending her use of it. The action was organized by Accius’ Voice of the Youth and the African American Advisory Board [AAAB] of the Sacramento City Unified School District.

District Superintendent Jorge A. Aguliar said in a statement that Sanders has been removed from “working with our students,” pending the outcome of an investigation. She is still employed by the district.

Gathered in an ever-expanding semi-circle under the cover of shade trees, community organizers gathered to press the district to move with purpose, urgency and public transparency when dealing with the teacher.

The AAAB also put forth additional demands for SCUSD including district-wide zero tolerance policy with regard to racist rhetoric and hate speech, a culturally responsive support team, and to remove the opt out of the current anti-bias and anti-racist professional development. Organizers said that the option to opt out allows teachers to start coming but not finish the program over time.

Noah Razo, a 15-year-old student at Kit Carson, was one the bravest souls in Sacramento on Thursday. Wearing a black hoodie, faded jeans, and classic Vans skateboard shoes, the 10th grader spoke out publicly about his interactions with Sanders when he was in her class during 7th grade.

He said the teacher used to use “the n-word with the hard ‘r’” often.

“She just said it regularly with a normal tone, like it was a normal thing to say.” Razo said. He added that she used other words like “the b-word, and that's discriminatory towards Mexican and Latinos like myself.”

Razo said when students heard the teacher use derogatory language “people were shocked. People were afraid to stand up and say ‘Hey!’”

But he added “I’m sure I’m not the first” to speak up.

Lorraine Pryor, President and CEO of the Black Leadership Project, said there are larger implications of the teacher’s purported actions.

“It’s not a head issue, it’s a heart issue,” Pryor said. “Either believe these children or you don’t. Either you care about them or you don’t, and your language ultimately shows your heart. And her heart was foul. And so we will not sit up and accept any more apologies. We want action.” 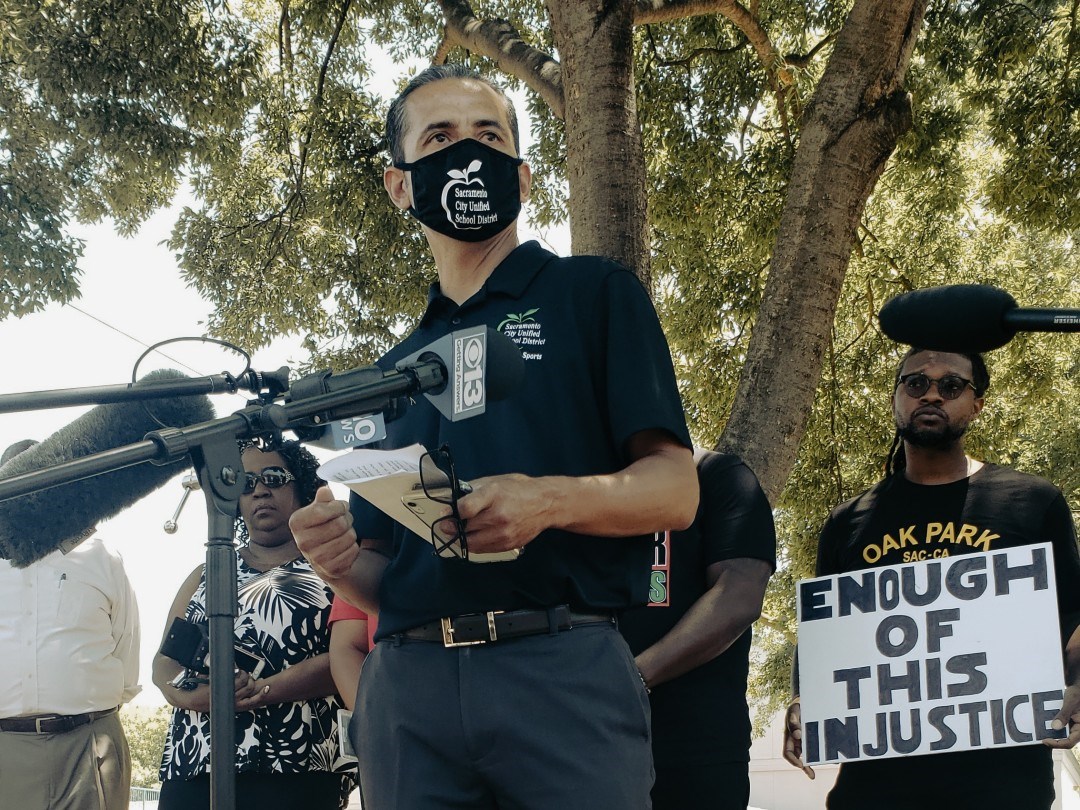 District Superintendent Jorge A. Aguliar attended the rally in a show of solidarity with family and community members.A.V. Benford / CapRadio

Superintendent Aguilar, who attended the rally with his three children and several faculty members of Kit Carson in a show of solidarity with family and community members, was forceful in his response.

When asked on the spot if the teacher will be fired, Aguilar said that “this is a personnel matter, therefore I can't comment... But I want to be clear that I stand in solidarity. I come as a father. I come as a community member. This is the school my kids are pre-registered to attend.”

Despite Aguilar’s response, Accius, the organizer of action Pushed for a more firm answer.

Aguilar reiterated the district’s prepared statement: “We have initiated an investigation that’s looking into allegations that we have learned about that go beyond the incident that occurred a couple of weeks ago. To the extent that the investigation confirms any of the allegations, then we will take appropriate actions.”