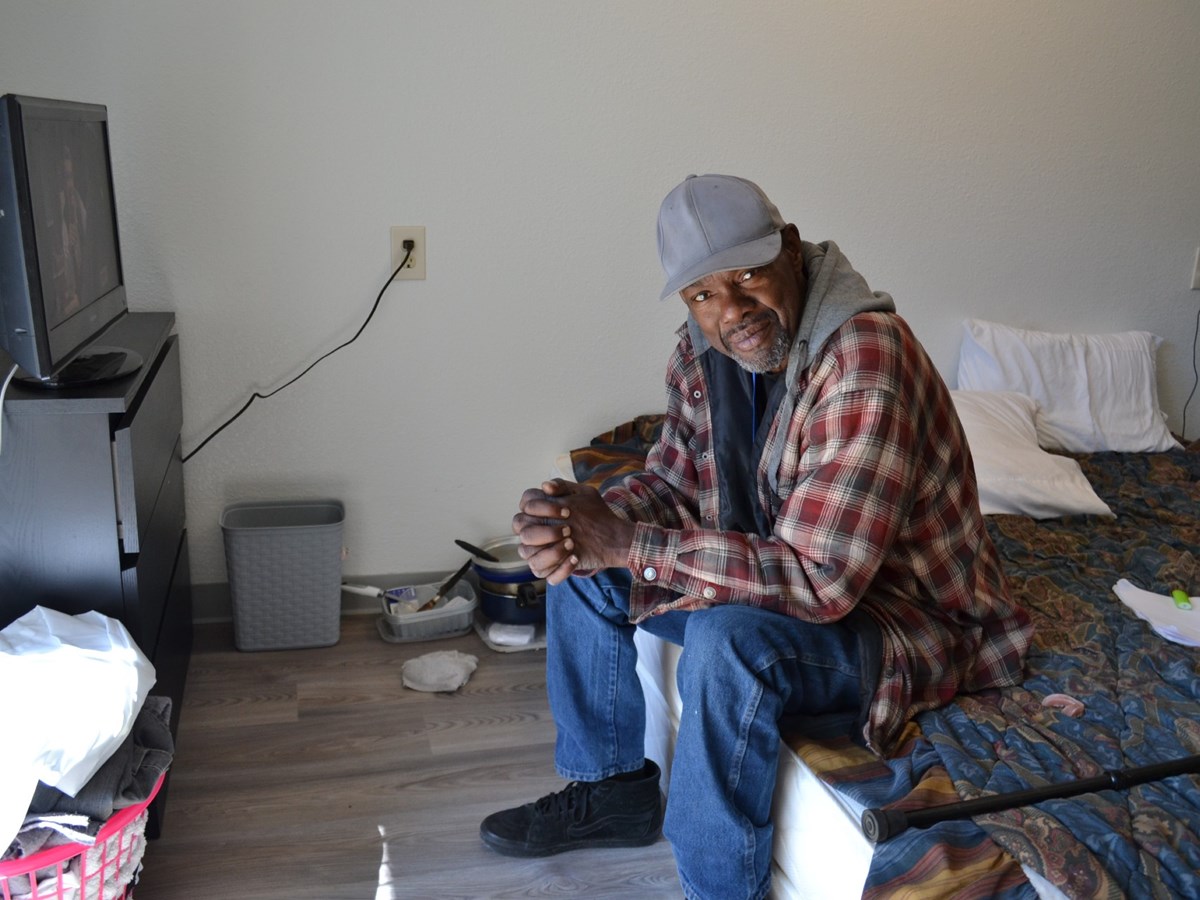 Formerly homeless resident Curtis Freeman moved out of his Project Roomkey motel in Sacramento in late April and into his own studio apartment in Citrus Heights.

Curtis Freeman walks the hallways at Auburn Oaks with his cane in one hand and pride all around. He’s the B-section leader at the Citrus Heights residential center where dozens of formerly homeless residents, himself included, now call home.

“All this is my section,” Freeman said on a recent Sunday, wearing a master key around his neck as sunlight illuminated the center. “I’m in charge of all this section. If people have problems, they can come to me.”

The nonprofit Goodwill refurbished the 82-room former convalescent home this spring with the goal of providing transitional housing. It’s one in a patchwork of properties across California that’s housing the wave of formerly homeless residents leaving Project Roomkey, a statewide initiative that sheltered or assisted more than 42,000 unhoused people in motel rooms and trailers during the worst of the pandemic.

But the project is now winding down, and while some like Freeman have secured stable housing, the fate for most is less clear.

As of this month, the majority of Roomkey’s participants had left the program. But just 20% of those who exited — or 6,700 people statewide — had obtained permanent housing, according to figures provided by the California Department of Social Services. That’s despite state and local efforts to rehouse Roomkey residents. 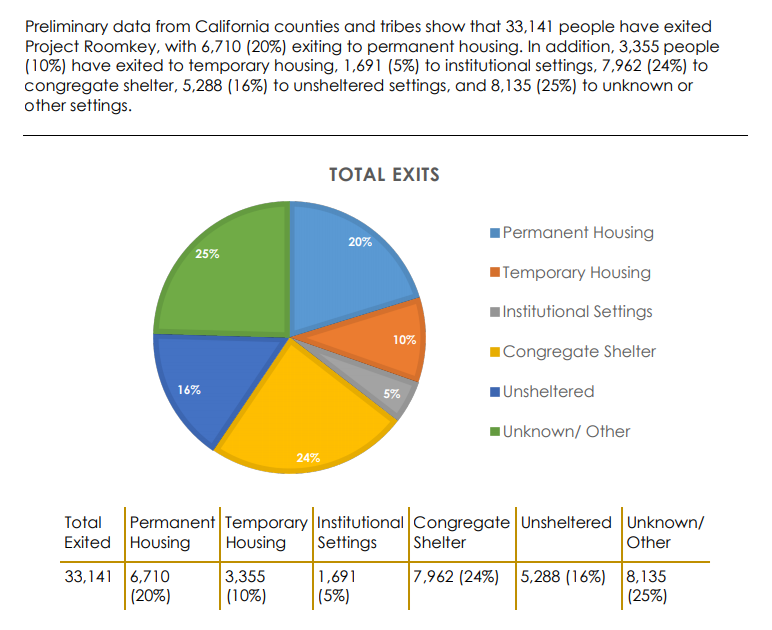 The destination for about 25% of those who left was marked “unknown or other settings,” according to the state. Another nearly 24% went to congregate homeless shelters, 16% ended up in “unsheltered settings,” 10% in temporary housing and 5% went to institutional settings.

Overall, two-thirds of the people who left the program have received rehousing services, which include direct payments such as rental assistance, move-in costs and financial incentives for landlords, according to the state data.

Some are still in the housing placement process, officials said. 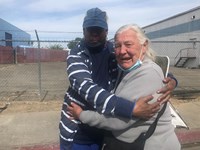 Meanwhile, approximately 10,000 people still live at Roomkey motels, many of whom are older or have underlying health conditions or both, according to the state.

“The work is certainly not over,” said Corrin Buchanan, assistant director of housing and homelessness for the state’s department of social services. “We’re deeply focused on that rehousing work for those individuals (still at the motels) in particular.”

Buchanan said the state will continue to help local governments find and pay for more properties like Auburn Oaks, all in a race to house residents before many Roomkey motels shut down this summer.

Need Is Greater Than ‘A Room And A Key’

Mike Gatto has not shied away from his criticism of Roomkey. The former Democratic state assemblyman from Los Angeles said the fact that a large majority of participants are not ending up in permanent housing shows the program was flawed from the start.

Gatto has argued the statewide program should have placed a greater emphasis on mental health treatment.

Those who aren’t moving on to housing “need tough love — obligatory mental-health and drug rehabilitation services — and not just a room and a key,” Gatto added. 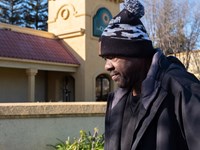 But some advocates say the challenge and expense of housing so many people so quickly should not be overlooked.

However, Martin noted that the scale of housing Roomkey residents and California’s overall homelessness crisis are immense. He said the problems must be addressed with permanent statewide homelessness funding for local governments. The Legislature proposed a $1 billion ongoing fund this month.

Currently, the state provides cities and counties with temporary or one-time funds, which advocates say makes it difficult to make long-term plans to address the crisis.

“We’re going to see a tough time housing that many people,” Martin added, referring to those leaving Roomkey. 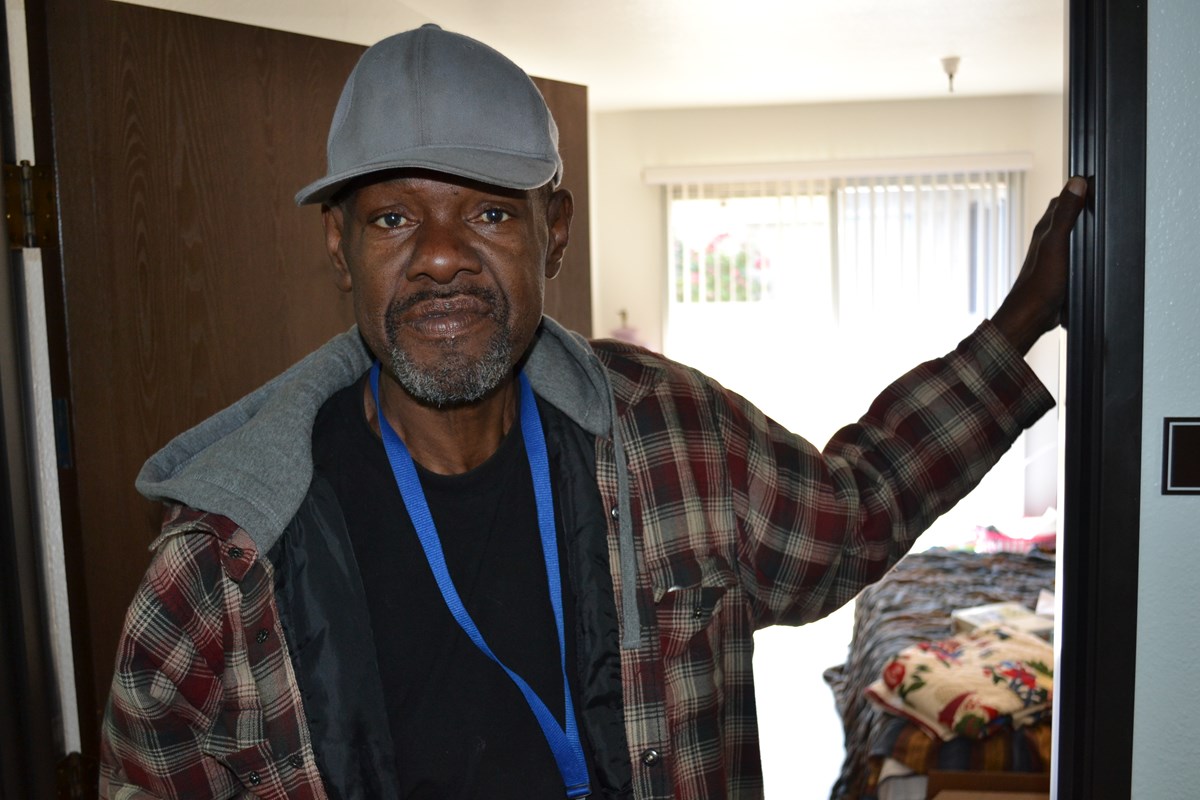 As the pandemic spread across California last spring, a local nonprofit connected Freeman with Roomkey in an effort to get him off of the streets.

The program was designed to prevent COVID-19 outbreaks among those who had nowhere to shelter in place safely. It gave priority to the oldest and sickest on the streets and in group shelters. Advocates say it largely worked.

But with the virus receding this spring and motel leases running out, most of the formerly homeless residents have moved on.

In the meantime, Freeman, who has a salt-and-pepper beard and wide smile, has already made several giant leaps on his journey. He also knows what a little help can do.

Now, he said he’s one of the lucky ones.

“Man, it feels good,” Freeman said in May inside his studio, which connects to a community patio. “I can relax, man. Knowing that I’m in somewhere.”

Each room at the Auburn Oaks facility where he lives is furnished with a mattress, mini fridge, TV and night stand and includes a private bathroom.

Residents can come and go from the property and invite guests to stay until 10 p.m., something they couldn’t do at the Roomkey motels.

But most of all, Freeman said he values having stability.

“It means a lot to me that I don’t have to really worry about being put out in the street,” he said, as an old movie played on his TV. “As long as I do what I’m supposed to do. Take care of my end.”

Taking care of his end means paying 30% of any income starting in July. Sacramento County will pay the rest of the rent for those placed at Auburn Oaks, where roughly 100 former Roomkey residents are expected to move this month, said Julie Field, the county’s homeless services program manager.

Roomkey had served approximately 1,300 people in Sacramento County as of last month and 224 had exited to permanent housing “that we know of,” Field said. She explained that some residents moved on without communicating where they’ve gone. She said others already had some form of housing and only used the motels as a place to isolate after testing positive for COVID-19.

Field said the county found a great partner in Goodwill to support the former Roomkey residents now living at Auburn Oaks. The nonprofit’s Next Move Homeless Services program manages the site, which has 130 units between the former convalescent complex and an adjacent apartment building.

Goodwill has already designated residents like Freeman as leaders in different parts of the complex to help build community. It plans to offer onsite job training in cosmetology, maintenance and woodworking, according to county and nonprofit officials.

“Goodwill is really invested in making that a thriving center for those participants,” Field added.

Richard Abrusci, president of Goodwill Industries of Sacramento Valley and Northern Nevada, described Auburn Oaks as “a stepping stone to long-term housing,” and not a place to warehouse formerly homeless residents.

“These people want to make the next step and they need some basic help,” Abrusci said, explaining that residents will receive assistance with resumes, job applications and will have a say in designing the training programs.

“This is a space for people to live out their dreams and desires,” Abrusci added.

But it’s also a space many homeless residents are still searching for. Though Roomkey got people off the streets, some unhoused residents say it hasn’t been the bridge to steady housing they said they were promised.

When Shannon Hood entered Roomkey in Placer County in January after being evicted from his home in Lincoln, social workers pledged to eventually connect him with longer-term housing options.

“None of that happened,” he said in April.

Instead, Hood said he plans to buy and live in a truck with some saved away money.

“They’re not housing anybody,” Hood added, an assertion that Placer County officials disputed.

A county spokesperson said 16% of its Roomkey participants had found either permanent or transitional housing as of this month.

A Housewarming At Auburn Oaks 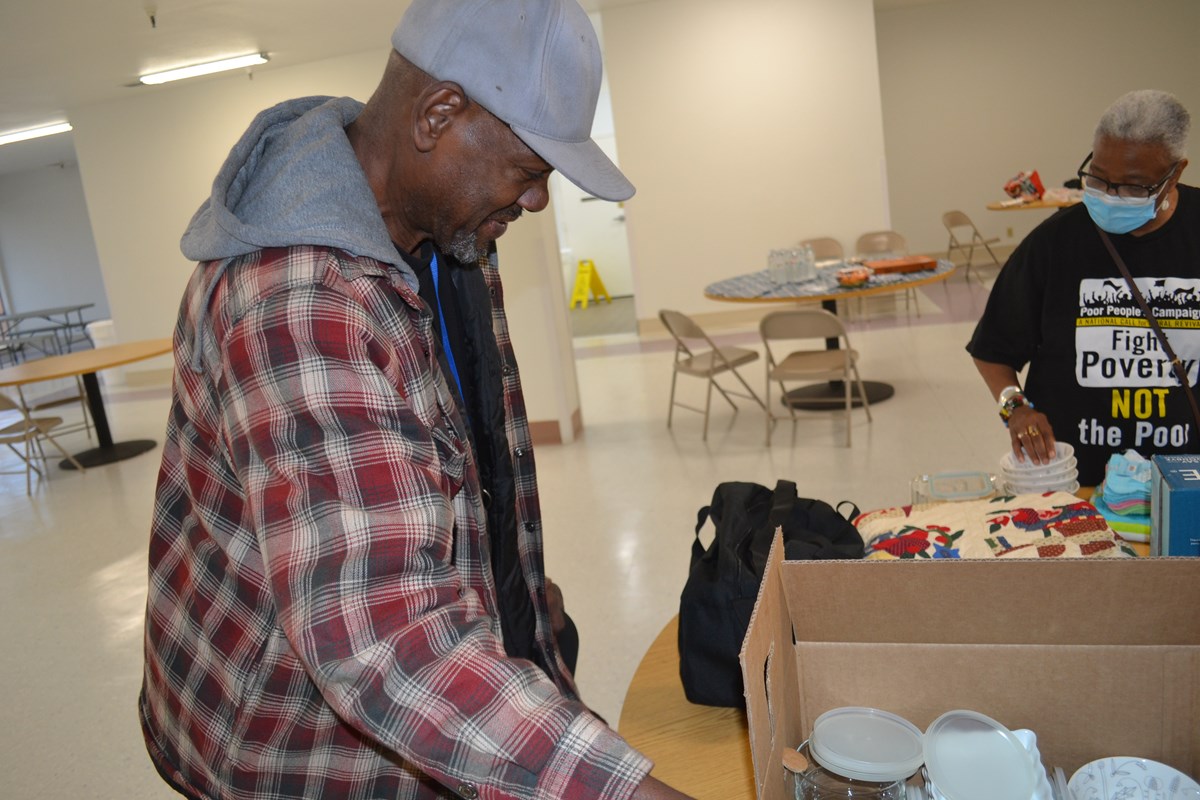 Freeman’s bridge to housing was built, at least in part, by the Sacramento Poor People’s Campaign. Members of the campaign organized a house warming for him in May, donating a comforter, sheets, towels and kitchenware and celebrating at the Auburn Oaks community cafeteria with pizza and fruit salad.

“It started with Faye,” Freeman said of his journey, referring to Faye Wilson Kennedy, co-chair of the anti-poverty group.

She connected Freeman to a motel room more than a year ago when he was living in a tent. The two stayed in touch and Freeman became a volunteer for the campaign, helping elderly homeless residents find shelter during the pandemic.

Months later, Kennedy helped again. She and a case manager assigned to Freeman through the nonprofit Sacramento Steps Forward worked to find him the studio.

“I’m glad for him. It’s like when you send your child off to college,” Kennedy said at the event. “So it’s been exciting.”

She added that Auburn Oaks offers Freeman and others who spent time on the streets the chance to get reconnected with their community, family and place of worship.

Freeman said someday he might look for a larger place.

But for now, he said he’s home.

“I’m going to be here for a while,” Freeman added, seated in his studio, looking out at his brightly lit patio. “I’m not in that motel no more.”