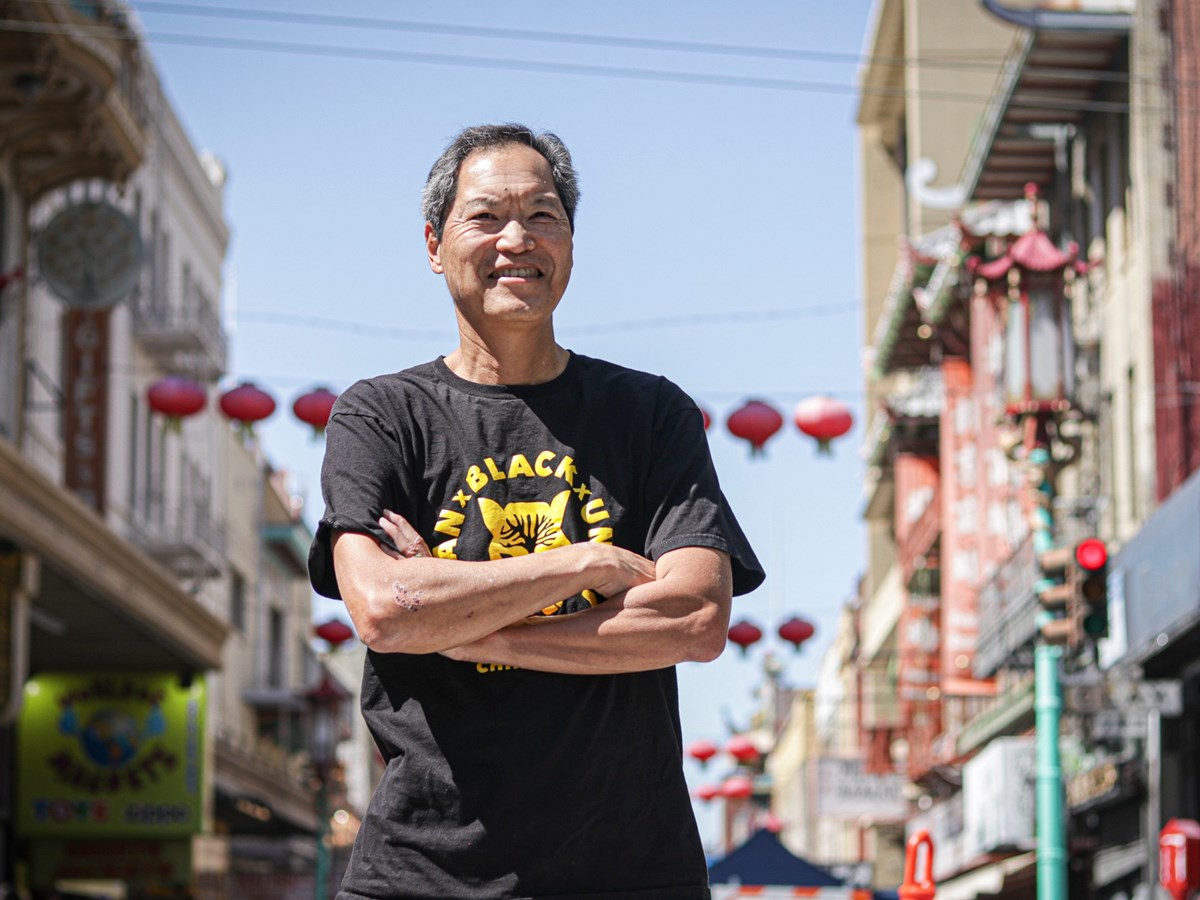 Russell Jeung, co-founder of Stop AAPI Hate, near the office of Chinese for Affirmative Action in San Francisco Chinatown on May 7, 2021. Jeung is an Asian American Studies professor at San Francisco State University.

Richard Lim was walking along a quiet sidewalk near UC Berkeley’s fraternity row last summer when, he said, two men called out to him.

“Hey Coronavirus, why don’t you take yourself and go home,” they shouted at the Asian American Studies graduate student, who was wearing a mask. “You don’t want to contaminate anyone.”

Even within his own family, the racist harassment Lim faced was not unique. His aunt, who works at an Asian supermarket, had also experienced racist verbal attacks, making her and Lim just two of thousands of Asian Americans who have reported experiencing harassment during the COVID-19 pandemic.

Later that summer, with incidents on the rise, Lim decided to do something. He became a volunteer with Stop AAPI Hate, a coalition based in California that has recorded nearly 7,000 hate incidents involving Asian Americans and Pacific Islanders nationwide since the beginning of the pandemic and created reports based on their findings. Despite being a small volunteer organization, the group has in just over a year become a leading source for tracking incidents of hate in the country, and its work has been cited by dozens of media outlets including The New York Times, The Washington Post, The Los Angeles Times, KQED, MSNBC and NBC News.

“Collecting the data and reporting on the data and getting in front of the media and other folks was really important,” state Senator Richard Pan, who chairs the California Legislature’s Asian Pacific Islander Caucus, said of the coalition’s work. “Without that collaboration, without that effort, I’m sure we would have individual stories, but they would not have highlighted this challenge that we’re seeing.”

“We’ve grown to be more than just a data collection center,” Lim said. “We’ve become a foundation for grounding a movement.”

“I knew from Asian American history that when epidemics came from Asia, Asians would be blamed and then face racism,” said Jeung. “I quickly started documenting the racism.”

The center soon received a number of grants from foundations, including one founded by professional basketball player Jeremy Lin, and gathered a group of volunteers and student researchers who could aid their mission.

Nearly a year later, the state of California pitched in, setting aside $1.4 million for the Stop AAPI Hate Coalition and UCLA’s Asian American Studies Center to conduct research on hate crimes against Asian Americans. The funding was championed by the Asian Pacific Islander Legislative Caucus.

While the FBI, the Department of Justice and California’s Attorney General’s Office collect data on hate crimes in California, no government agency was systematically tracking the recent uptick in harassment of Asian Americans, Pan said.

Volunteers review each report submitted by community members to the Stop AAPI Hate website; more than 2,800 came in during March 2021 alone. Women reported more than two thirds of all incidents in the coalition’s most recent national report. About 44% involved Chinese Americans.

While about 12% of survivors said they experienced some form of physical assault, more than two-thirds reported verbal harassment. Others reported civil rights violations, such as workplace discrimination, or online attacks.

“When someone calls you a racial slur from a moving car, that’s not something that you can necessarily call the police about. That’s not violent. You are not physically hurt,” said Chinese for Affirmative Action spokesperson Yamuna Hopwood. “But it’s hateful all the same.”

Once received by the coalition, reports are entered into a database. If necessary, the report is then translated into English. Stop AAPI Hate does not verify the reports, Jeung said, but volunteers do “clean up” the data.

That involves editing reports for spelling and grammar, but also interpreting certain aspects of a case, such as determining what type of hate incident took place, said Eric Augustus Bai, a data engineer who helped Stop AAPI Hate develop new ways to visualize their data.

Aggregated data sets allow Stop AAPI Hate to track trends within anti-Asian racism, Jeung said. He stressed the importance of depicting racism as “widespread, institutionalized and systemic.” Recent reports from the coalition have analyzed the impact of racism on different Asian American ethnicities, on women and girls and on mental health.

Stop AAPI Hate may be new, but it’s rooted in the work of people with years of experience focusing on Asian American issues, said Karin Wang, a professor of public interest law at UCLA and the former vice president of programs at Asian Americans Advancing Justice.

“In terms of what they were able to come together and do, I do think it’s been really impactful,” she said. “I mean, we live in an age where data drives everything.”

Brian Levin, who directs the Center for the Study of Hate & Extremism at Cal State University, San Bernardino, said Stop AAPI Hate’s findings line up with his own research, which focuses on crimes reported to police. Using police data, the center found that hate crimes against Asians in the U.S. increased by almost 200% between the first quarter of 2020 and the first quarter of 2021 — a sign, Levin said, that the trend has not yet peaked.

Some community members have contacted Stop AAPI Hate in the wake of an incident as an alternative to calling the police, organizers say. The coalition does not have the capacity to directly respond to incidents of harassment, but plans to create online resources to help survivors, including multilingual videos that address actions people can take if bullied, ways to talk to a child dealing with trauma and how to talk to family about race.

“If part of the issue is that Asians are being represented or seen as perpetual foreigners and treated as foreigners to be objectified and attacked, then we have to change that narrative,” Jeung said. “And narrative work involves education.”

Rebecca Wu, a junior at Alhambra High School, spent part of the year developing the workshops, which will be posted on the center’s website for use in high school classrooms and student club meetings.

“I was looking at the worksheets we made, the slides and the outline of the lesson…I was just so amazed,” Wu said. “That was kind of when I felt like, well, like we could be taken seriously.”

Stop AAPI Hate has also been working with Asian American students to learn about their concerns and ideas for increased safety on school campuses. Student leaders drafted a letter with their suggestions — which range from expanding mental health services to creating a multilingual, online hub for students to anonymously report hate incidents — and State Superintendent of Public Instruction Tony Thurmond sent it to district superintendents and charter school administrators on Thursday. 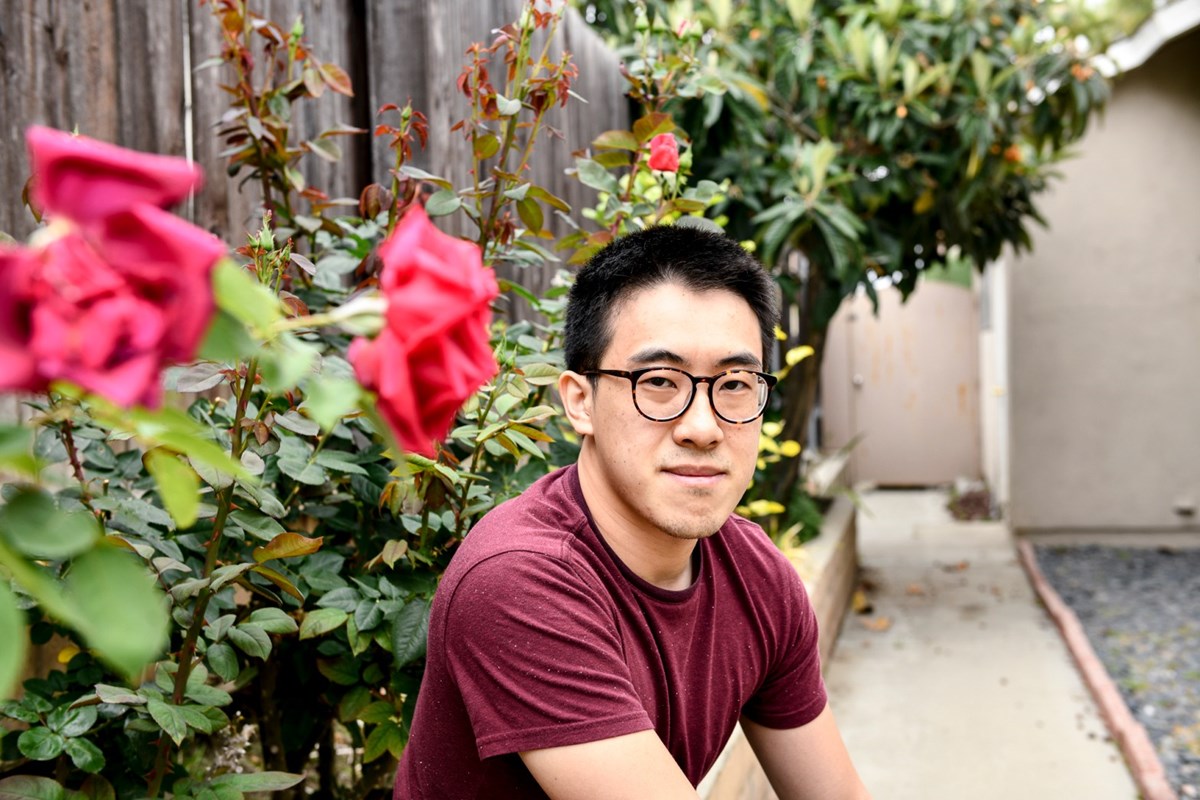 SF State graduate student Richard Lim poses for a portrait at his home in Rowland Heights on May 11, 2021. “I think a lot of folks have been activated after attacks on the vulnerable and elderly.”Pablo Unzueta

As the coalition has reported more and more cases, its volunteers say they’ve had to balance their own emotional struggles with the tasks at hand.

“It’s really hard,” Hopwood said. “Acknowledging pain and suffering that victims feel, that we feel vicariously through them, (is) an important step to realize that this is not okay.”

Jeung said he often spends his day being “pulled from all sides,” tending to media requests, working with corporations interested in donating to Stop AAPI Hate and attending listening sessions run by the Department of Justice, the Department of Health and Human Services and the White House.

Each day, he said, he goes through “the range of emotions, from anger to depression to hope.”

“We’re still grieving over the Atlanta shootings. We’re still angered by seeing our elderly pushed and shoved,” Jeung said. “That’s, for me, a real heavy burden to support the community at the moment.”

Others, like San Francisco State University graduate student Boaz Tang, who has been reviewing incident reports for the past year, say they are using their anger to fuel their volunteer work, instead of just stewing.

“I’m going to try to do what I can with the opportunities that I have, just so I don’t have to sit on my rage and feel numb,” Tang said.

Jacob Lacuesta, an Asian American Studies graduate student at San Francisco State, said he supports the coalition’s efforts but that the name Stop AAPI Hate homogenizes the Asian American community and is a “complete erasure” of different Asian identities, leaving out South Asians and Middle Eastern people, among others.

Jeung said naming the organization was not the coalition’s top priority. “We didn’t spend a lot of time thinking about or trying to brand ourselves,” he said. “We’re just trying to address the racism.”

While the Stop AAPI Hate coalition has called for allyship between different marginalized communities, Lacuesta said some media coverage of attacks on Asian Americans has perpetuated anti-Blackness.  “Though there are perpetrators of many backgrounds, Black individuals tend to get the most media attention,” he said.

For example, a Fox News segment from last month falsely suggested there is a conspiracy by other news organizations and Democrats to not “identify the race of the attackers” and strongly implied a majority of those attackers were Black.

While Stop AAPI Hate does not advocate for increased policing as a response to the violence against Asian Americans, some government responses to the attacks have funneled resources to law enforcement, such as a new federal hate crimes law signed by President Joe Biden last month. That has drawn criticism from some of the coalition’s supporters.

“When Stop AAPI Hate is democratized as a hashtag or as a movement…once it’s in the world, you don’t get to control it, you don’t really get to reel it back, there’s no undo button,” said Tang. “It’s really cool that the movement has grown. But also, things can get co-opted, and it can be taken places that the people who started the organization never intended.”

Moving forward, members of the Stop AAPI Hate coalition say they hope to continue their work combating white supremacy, while seeking to cultivate relationships with different communities of color.

Lim, the volunteer who said he was harassed near UC Berkeley, noted that Asian Americans have faced discrimination in the United States since the early 1800s.

“This historical moment is nothing new,” Lim said. “It doesn’t take long to go back even 10 to 15 years to see different forms of anti-Asian hate come across in national political discourse, to understand how Asian Americans are consistently seen as the perpetual foreigner.”

Although racism against Asian Americans predates the pandemic, Hopwood said the events of the past two years provided an opportunity to create new solutions.

“This did not start when the pandemic did, and it won’t end when the pandemic ends,” she said. “It’s all about taking the energy and a lot of the attention that this issue has gathered in this moment and trying to channel it into long-term, meaningful change.”

Seshadri is a contributor with the CalMatters College Journalism Network, a collaboration between CalMatters and student journalists from across California. Janelle Salanga contributed reporting. This story and other higher education coverage are supported by the College Futures Foundation.