A handmade yellow paper crane at the California state Capitol on June 3, meant to symbolize hope and solidarity in support for Lam Hong Le.

Hundreds of brightly-colored paper cranes perched on the steps of the Capitol Thursday, a sign of solidarity, hope and support for Lam Hong Le, a Vietnamese war refugee at immediate risk of deportation. Accompanying the cranes were advocates from various groups there to demand Governor Gavin Newsom issue a pardon for Le.

Tsuru for Solidarity, a Japanese American grassroots group, organized the action in partnership with the Southeast Asia Resource Action Center (SEARAC), Sacramento Immigration Coalition, Interfaith Movement for Human Integrity and Detention Watch Network. The organization has been circulating a petition, which has over 2,900 signatures calling for Le’s pardon.

At the rally, Le said that he was grateful for the care and compassion he felt from those there.

“It’s really touching my heart — I want to say a lot of things, but I’m without the words,” he said. “I hope that I will never forget each one of you, and everyone that signed my petition for my pardon.” 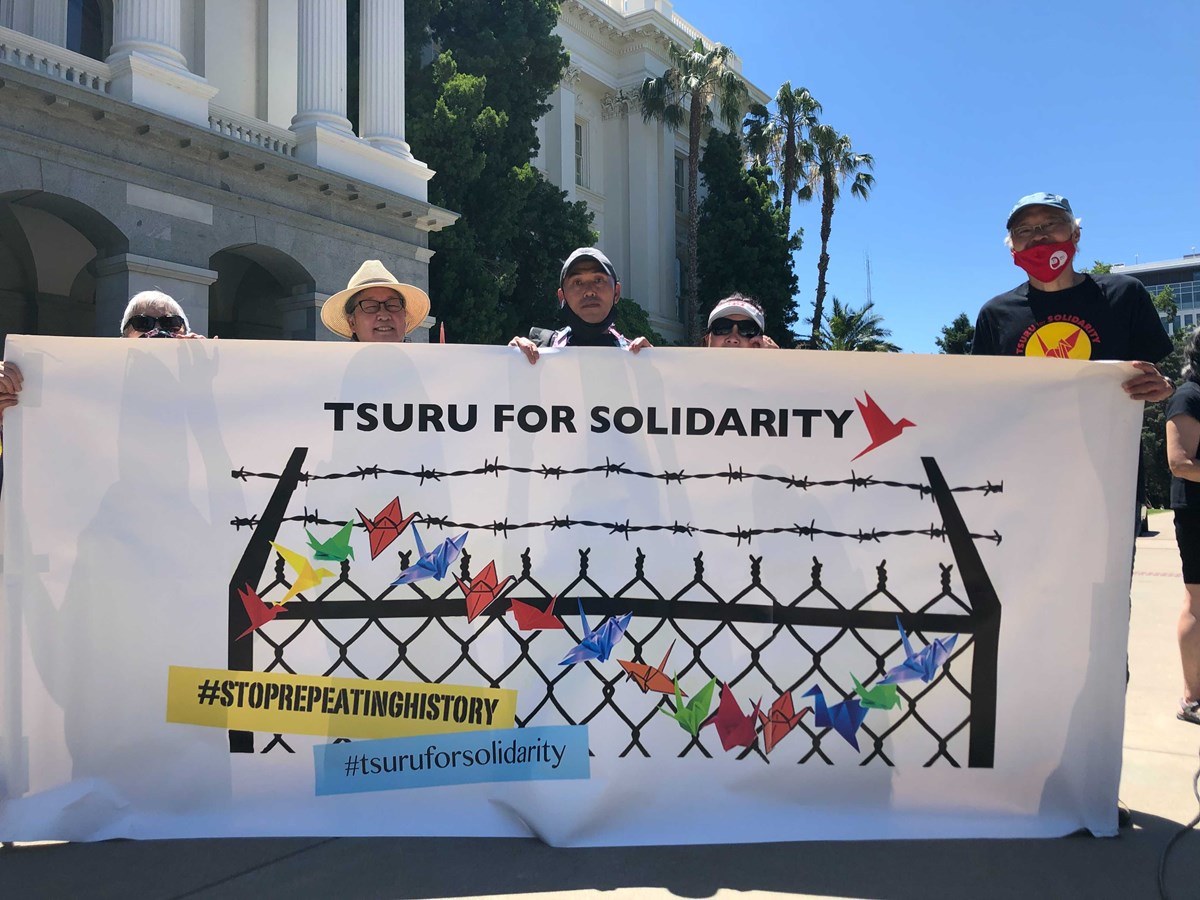 Ina was born in a Japanese internment camp. She said that solidarity was Tsuru for Solidarity’s mission and that it was critical for the Japanese Americans who started the group not to center themselves, but to lift up the stories of others to build understanding of shared struggle.

“A story of a Vietnamese refugee is something that Japanese Americans might not have had much interest in,” Ina said. “But when they tie it to the fact that immigrants and children are being held behind barbed wire, that’s a repetition of our own history and unjust, inhumane use of mass incarceration.”

Immigrant detention disproportionately targets people of color in the United States, according to Dr. Rhonda Rios Kravitz, from the Sacramento Immigration Coalition.

While Black non-citizens in the United States — many of whom live in over-policed communities — make up 7% of the entire immigrant population, they are 20% of those facing deportation for criminal offenses. In 2015, the most recent year that detailed data was available, 70% of deported immigrants were Mexican, and there has been a pattern of racially profiling Latinos in the U.S.

“The U.S. has remained in the grip of an unjust, unnecessary and self-inflicted epidemic of mass incarceration, the machinery of which only deepens racial inequities and harms that have existed for thousands of years,” Kravitz said during the rally.

At least 16,000 of the more than 2.7 million Southeast Asians in America have received final orders of deportation, according to a 2018 fact sheet from SEARAC. More than 13,000 of those orders were based on old criminal records, and many of those Southeast Asians came to the country as refugee children fleeing Cambodia, Laos and Vietnam during the 1970s and 1980s.

The U.S. and Vietnam agreed in 2008 that the latter would only accept deportees who came to the U.S. after 1995. But three years ago, the Department of Homeland Security was accused of renegotiating that agreement.

That change broadened the potential deportees to those who came to America as children — like Le. 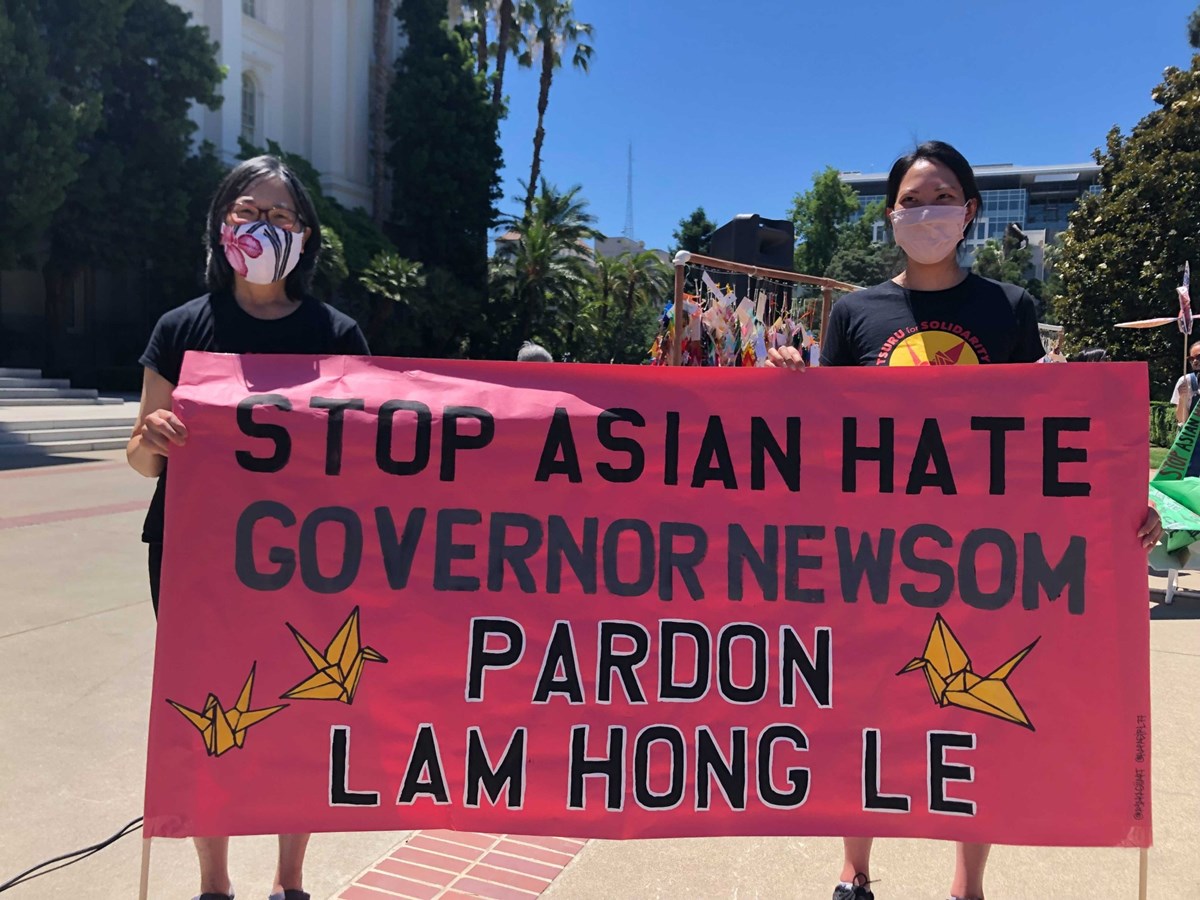 What’s happening to Le is an example of what advocates call “double punishment,” under which anyone who is not a U.S. citizen can be deported for even a minor misdemeanor, regardless of how long ago it happened.

That’s what happened to Vietnamese refugee and California resident Tien Pham earlier this year. It’s a result of the 1996 Illegal Immigration Reform and Immigrant Responsibility Act, which expanded the number of crimes that resulted in mandatory deportation. That meant non-citizens who committed a crime on that list — regardless of how long ago it happened — could go back into detention or be deported, even after serving time in prison.

Le is facing the same issues.

He came to the U.S. in 1981 with his younger brother after spending a year in a Hong Kong refugee camp and 12 years in Vietnam. After being separated from his brother and enduring abuse from his two sponsor families in the U.S., Le found family and support in a gang.

Then, when he was 23, he killed a rival gang member and was sent to San Quentin State Prison.

“I thought I was going to live there and die in prison,” he said in a virtual town hall last week.

Through working with art teachers at the prison — namely Jun Hamamoto, his “Auntie Jun” — Le said that he started to change himself. In 2019, he was granted parole, but minutes after being released from prison, he was taken to Yuba County’s ICE detention facility, where he was held for two months after being put through a 24-hour-long processing.

Le has been staying in transitional housing while awaiting deportation. He’s also helping to provide services and care to houseless residents in Oakland.

Criminal defense attorney Joshua Kaizuka, another member of Tsuru for Solidarity, has been helping Le navigate the process of requesting a pardon.

He usually defends people accused of committing a crime, and said working with Le has been a “doozy” because it isn’t as simple as advocating to the judge or jury.

“It’s trying to show through evidence and documents and testimony that someone deserves that chance to have their record cleared so they get their rights,” he said.

Fijean Charles Joseph, with the Interfaith Movement for Human Integrity, said at the rally that he is also under immediate threat of deportation and facing double punishment. He said he has been working with Tsuru for Solidarity after meeting them through a healing circle.

“The system will put you in detention and say ‘No, you’re not parollable. You don’t deserve bond. You’re a threat to the community,’” Joseph said. “Yet the community is out here fighting. They fought for me to come home. They fought for Le. We want our community’s members back. There is redemption for all.” 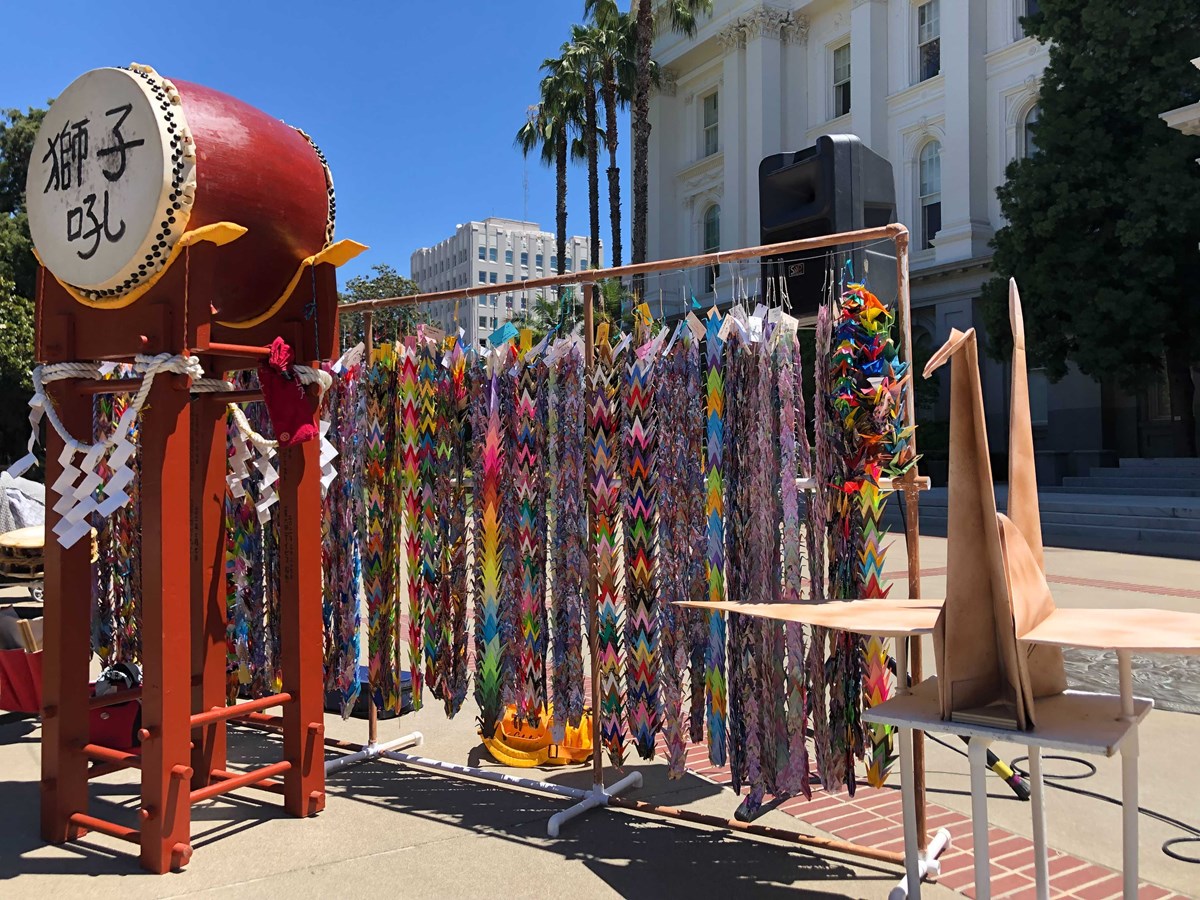 The rally organizers set up large paper cranes next to the crane garlands. Also displayed is a taiko drum, played by members from Bakahatsu Taiko Dan of UC Davis who came to perform songs of resistance and community.Janelle Salanga / CapRadio

California is one of the top five states with the largest number of people in immigrant detention per day.

It is also a sanctuary state for undocumented immigrants because of Senate Bill 54. Local law enforcement must protect immigrants from deportation threats, and it’s illegal for them to collaborate with Immigrations & Customs Enforcement (ICE) unless an individual is convicted of a serious felony or crime.

However, under the bill local jails and prisons are not subject to the same mandate. That gives them free reign to transfer people with completed sentences like Le to ICE.

A pardon for Le wouldn’t be unrealistic under the Newsom administration — last week, the governor pardoned two Southeast Asian firefighters, Bounchan Keola and Kao Saelee, who were also detained immediately after being incarcerated.

California legislators are pushing to prevent these situations from happening again.

Assembly Bill 937, also known as the Voiding Inequality and Seeking Inclusion for Our Immigrant Neighbors (VISION) Act, would prohibit any state or local agency from arresting immigrants and assisting or facilitating immigration arrests, including ICE transfers.

Without the VISION Act, Kaizuka said that people could get picked up right after they exited custody, whether it was prison or jail, by federal immigration.

“The bottom line is you lose your ability to be free,” he said. “You’re locked up in a cell and told what to eat, when to eat, you have no liberty. The VISION Act will preclude that from happening in California.”

The Assembly passed the VISION Act this week, sending the legislation to the Senate for consideration.

While lawmakers continue to decide the future of the bill, Le will be hearing more about his future at the San Francisco Immigration Court on June 7 for his deportation proceedings.