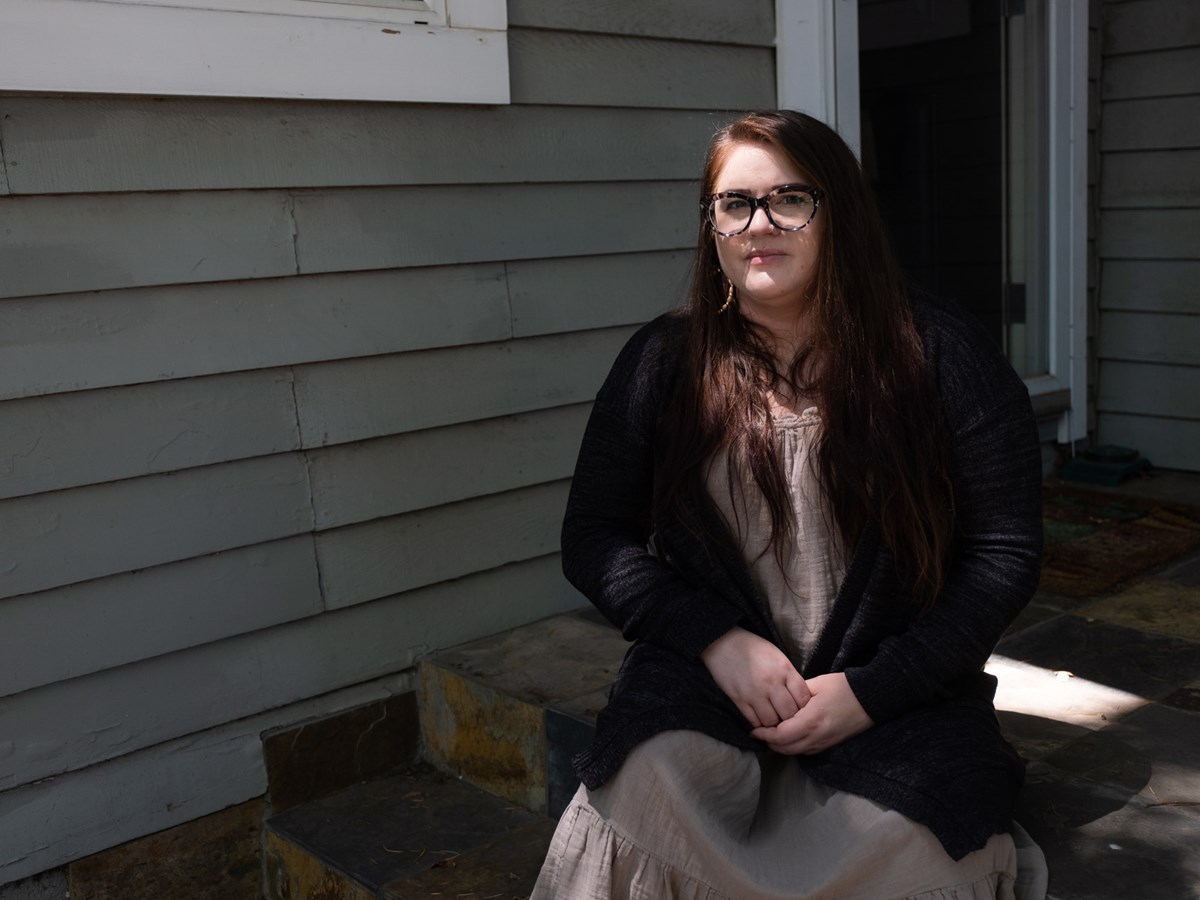 Erica Jaramillo outside her Sacramento home on Monday, May 17, 2021.

Erica Jaramillo knows what it’s like to struggle to find affordable housing.

At the end of July, her lease will expire in the Oak Park duplex she’s called home for six years. Her landlord is selling right in the middle of a red hot real estate market, so the chance of renewing is slim.

“It creates panic for me,” the 33-year-old Sacramento native told CapRadio. “It’s like the only thing I’m thinking about the rest of the day. Because all I have in the back of my head is ‘July 31st, July 31st.’”

A recent report found many of Sacramento County’s working-class residents simply aren’t making enough to keep up with these changes. Renters must now make about twice the state’s minimum wage, or nearly $27 per hour, just to afford the county’s average rent of $1,392.

Jaramillo, a housing advocate who works as a program analyst for the state, said she’ll need to pay hundreds more every month to stay in the neighborhood — which like most of Sacramento is experiencing change as home prices continue to climb and some lower-income residents are forced out.

Housing advocates say few places are feeling the effects of displacement more than Oak Park. The median sales price for a home this year is $357,500, a 600% increase from a decade ago, according to Ryan Lundquist, a real estate data analyst and appraiser.

Oak Park homes “sold in an average of 20 days. But the real stat is half of all homes sold in 7 days so far,” Lundquist wrote in an email.

Jaramillo’s current landlord, Anastasia Kryukova, said she doesn’t necessarily have to move, but acknowledged “there’s no way for me to predict” whether the new owner will choose to renew the lease.

Jaramillo said the sale and non-renewal of her lease are, in effect, forcing her out.

She said she’ll sell her car or take a second job to afford higher rent and to sock money away to purchase a home someday. But many don’t have that option.

The Sacramento County 2021 Affordable Housing Needs Report by the nonprofit California Housing Partnership found the county has a shortfall of 58,383 affordable homes for its lowest-income renters. That means a shortage for retail workers, janitors, child care workers and home health aides and more — all who make approximately $10 per hour less than what’s needed to afford the average rent.

The group’s report considers a rental home “affordable” if a household spends no more than 30% of their income on rent and utilities.

The region’s affordable housing shortfall has hovered near 60,000 in each of the partnership’s reports, which date back to 2017. Statewide, there’s a need for well over 1 million additional affordable rental homes, according to the partnership.

“To see that number on paper, it’s heartbreaking really,” Jaramillo said of the housing shortage. Jaramillo sits on the board of the grassroots group Sacramento Investment Without Displacement (SIWD) which works to prevent new development from uprooting residents. “What does that say about our futures?”

SIWD sued UC Davis last year over the university’s Aggie Square development, a billion-dollar science and tech hub that’s expected to bring up to 5,000 jobs to the area and give Sacramento an economic boost. The group, which consists of residents who live in the area, said it would drive real estate prices even higher, making the neighborhood unaffordable for existing low-income residents and businesses.

SIWD dropped its lawsuit last month after Sacramento officials promised to ensure all aspects of the community benefits agreement are met — specifically the $50 million investment to create nearby affordable housing. The city, UC Davis and Aggie Square developer Wexford Science + Technology announced the agreement in March..

“Sacramento is suffering in an unprecedented way,” said Cathy Creswell, board president for the nonprofit Sacramento Housing Alliance, which advocates for affordable housing. “It used to be that we were considered more affordable, especially compared to the Bay Area. But in the last few years, we’ve had the highest rent increases of any market in the nation.”

The report by the housing partnership suggests Sacramento County’s poorest residents are in desperate need. It found 81% of the county’s extremely-low income households, or those who earn less than one-third the area’s median income, already pay more than half their earnings on housing and utilities.

“It really means people are one crisis, one lost paycheck away from homelessness,” Matt Schwartz, president and CEO of the California Housing Partnership, said during a Facebook Live event announcing the report last week.

Rent hikes, combined with pandemic-related job losses, have driven numerous Sacramento families out of their homes over the past year, said Gabby Trejo, executive director of the community-based group Sacramento Area Congregations Together, or ACT. Trejo also is a board member with SIWD.

“We’re getting calls from families all the time,” she said, explaining many calls are from the poorest in the region, including those who are undocumented. “The reality is with COVID, we have been not just devastated by the loss of lives and jobs. But it’s creating a bigger gap — a bigger wealth gap and making it more difficult to stay in our region.”

‘More Money Than We’ve Ever Had Before’

Sacramento Mayor Darrell Steinberg called the report’s findings “both stunning and not surprising. We’ve known about this for a long time and it is not just a community problem here in Sacramento. It is our state’s biggest problem.”

Even so, Steinberg said he’s more encouraged now than in the past because more federal and state funds are available to address the need. The mayor said he expects the region to use the money “to produce tens of thousands of additional units of housing and also prevent the displacement of people who are currently housed.”

Steinberg pointed to efforts like rental assistance, which helps tenants who lost jobs due to COVID-19 pay back rent. The city also set aside $5 million for “anti-displacement strategies” in Oak Park to help renters and homeowners stay in their homes as part of Aggie Square community benefits agreement.

“There still might not be enough money (to address all the need), but there is more money than we’ve ever had before,” Steinberg said.

The housing partnership report made several statewide policy recommendations for addressing the shortfall of affordable homes. It called for creating a $10 billion statewide housing bond to pay for five years of affordable housing for low-income families and people experiencing homelessness.

It also recommends new apartment and condominium developments be built in commercial and mixed-use zones when at least 20% of the homes are affordable to low-income households.

Additionally, it called for speeding up the construction of affordable homes and reducing uncertainty and costs for developers. To accomplish this, the state should create one decision-making process for awarding affordable housing development funds, the report said. Currently, four separate agencies must approve the funds.

Gov. Gavin Newsom signed legislation on May 20 to streamline the review process for the California Environmental Quality Act (CEQA), which could fast-track housing projects that cost at least $15 million as long as they include affordable housing.

CEQA’s goal is to mitigate environmental damage caused by construction, but developers say it can unnecessarily slow down projects and sometimes discourage building altogether. The new law fast-tracks the review process for and will also apply to some manufacturing and renewable energy projects.