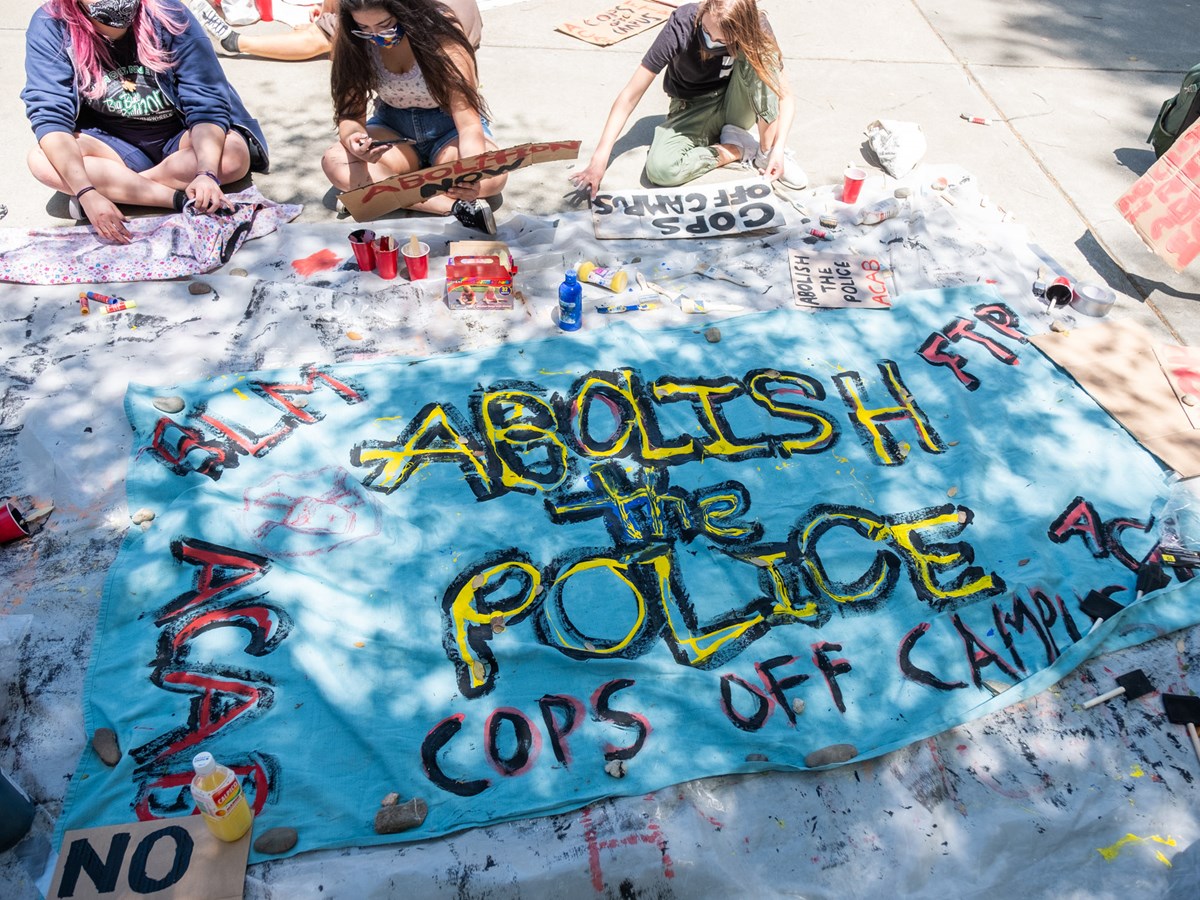 A group paints signs calling for the abolition of police on the UC Davis Campus, Monday, May 3, 2021.

At universities across California, students and workers refused to attend class or meetings, answer emails and clock into work Monday as part of a “day of refusal” organized by the group Cops Off Campus Coalition. The work stoppage began Abolition May, a series of actions grounded in a central demand: Remove police from all campuses.

Though the action was all-virtual due to the pandemic, 27 centers and departments in University of California schools and over 1,100 individuals throughout the nation signed a pledge to participate in the day of refusal.

The Cops Off Campus Coalition includes organizations in both the United States and Canada and formed in the wake of last summer’s uprisings against police violence following the deaths of George Floyd, Breonna Taylor and others. It has since been meeting regularly to prepare for Abolition May.

While this month’s actions are focused on creating momentum to remove officers from all UC and California State University campuses by the start of the new school year, the coalition ultimately demands abolishing the police and reimagining community safety.

The month of demonstrations comes as organizers and activists push for disinvestment in policing on school campuses, including at the primary and secondary levels. Nationwide, local K-12 school districts have been ending their contracts with local police departments. Data from the ACLU shows that having police on K-12 campuses has disproportionately harmed students of color.

In Sacramento, following months of pushback from local organizations, the city school district ended its contract with the police department, opting instead to look for alternatives.

In the Bay Area, the Peralta Community College District voted last December to end its contract with the Alameda County Sheriff’s Office, electing instead to hire unarmed community task forces that approach security with a restorative justice model.

Despite intensified calls last summer to defund police and reallocate money toward student services, six of the nine UC campuses increased their police budgets for 2020-21.

Stett Holbrook, a spokesperson with the UC Office of the President, said that new policing guidelines will be released this summer, following discussions that took place during the Campus Safety Symposium earlier this year.

“UC recognizes the strong sentiment surrounding the issue of policing and supports the peaceful expression of a wide variety of viewpoints, including those of the Cops Off Campus Coalition,” Holbrook said via email. “We believe the best way to create an environment where all feel safe, respected and heard is through continued dialogue and broad input that leads to thoughtful action.”

Holbrook did not specifically address the disbanding and disarming of campus police in his statement.

University of California, Davis Police Chief Joseph Farrow said in a panel hosted by KQED and CalMatters that while he believes that students need the services and security police departments provide, he doesn’t think students and the community should feel like they’re being policed.

“Campus safety to me is all about creation of an environment that allows the university to fulfill its mission of research, teaching and learning,” he said during last month’s discussion on the future of policing at schools and universities. “Everything we do should support that mission and nothing should detract our community members from those experiences.”

Still, members of the UC community are circulating a petition that opposes four currently proposed revisions to police policy: a new body camera policy, the permitting of retired officers to carry concealed weapons, the creation of a systemwide response team to respond to assemblies and amended use-of-force policies.

The petition calls for the UC to restart discussions around policing and to be more inclusive in who it brings to the table.

Who Will Keep Students Safe?

Campus police are a fixture of campus life, but their presence has often undermined students’ perception of safety.

At 32 of the 33 police departments on UC and CSU campuses, police officers are whiter than the communities they serve, according to a review by CalMatters of officer demographics. While diversifying police forces has made some students feel safer, some studies of city police departments revealed that non-white and white officers are equally likely to shoot civilians of color. And some students say regardless of increased diversity in law enforcement, continued police presence has retraumatized them from prior experiences. 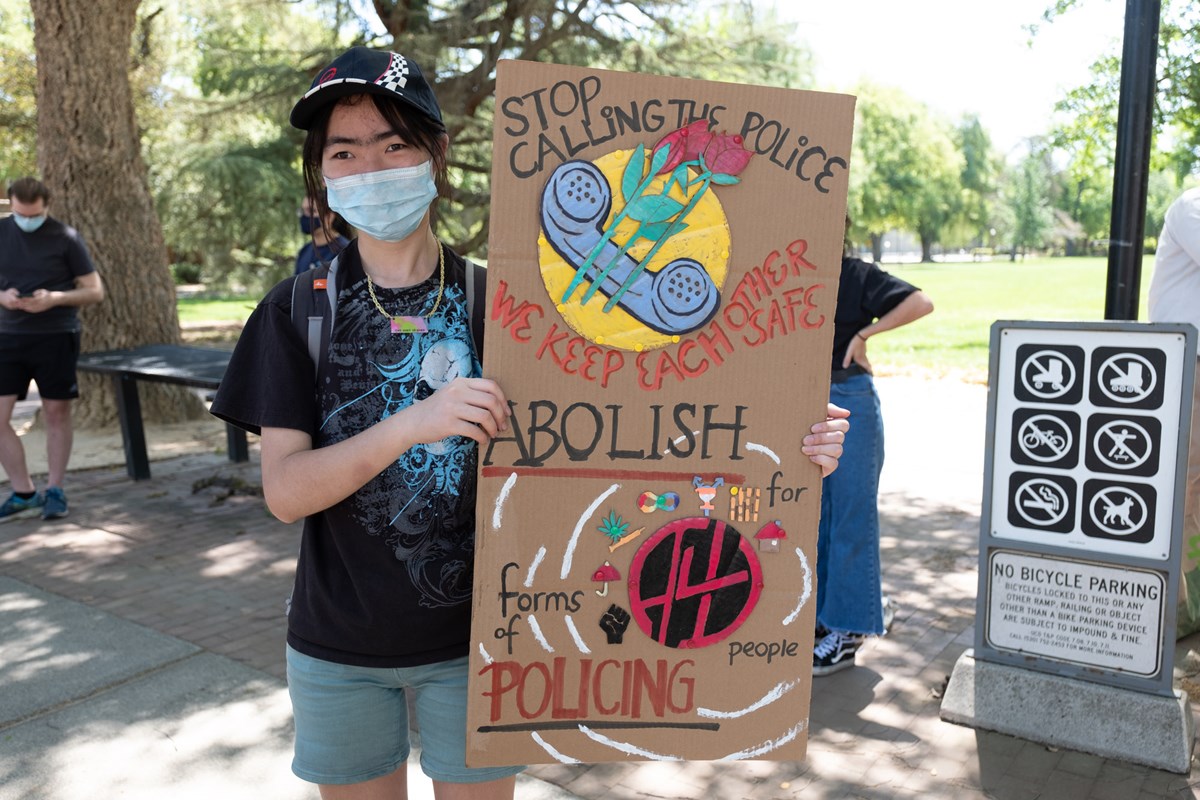 That can pose problems for those students and others, as police are typically first responders to mental health crises due to understaffed mental health services. Nationwide, it’s estimated that 20% of service calls for police fall under that umbrella.

Neuson, who is Black and queer, wrote in an essay for The Triton, a student newspaper at UCSD, that having police show up at his door during a crisis heightened his anxiety, which could have created the impression of resistance and put him at risk. He said he had already been stopped once by a UCPD officer for no apparent reason earlier in his time at the university.

“I sat on my couch trying my best not to panic or make any sudden movements that could lead to me having a bullet in my head,” Neuson wrote. “Maybe this was CAPS’ brilliant idea: replace my depression with anxiety.”

Since 2015, nearly a quarter of those killed by police had some diagnosed mental disorder.

One alternative to calling police would be redirecting funding from police forces into mental health services at universities, Neuson said.

“CAPS must stop dispatching UCPD to handle cases of ‘students of concern,’” he wrote. “Mentally-ill students are facing medical issues. They should be taken care of by medical professionals.”

Another proposed alternative are hotlines like Community Action Teams (CAT) 911, created to address incidents of sexual violence, mental health crises and domestic violence with unarmed teams of community members trained in de-escalation and focus on what the affected person says they need.

While 72% of campus law enforcement departments have a staff member dedicated to survivor assistance and response, less than a quarter of female student victims of sexual violence report it to law enforcement, campus or otherwise, according to data compiled by Rape, Abuse & Incest National Network.

One factor contributing to that hesitation is the hundreds of instances of police officers who have sexually assaulted victims. Another fear, particularly from Black women, is that their experiences will not be taken seriously or misrepresented by law enforcement.

Isabel Tayag of the Abolition Collective said that she’d like to see a similar hotline to CAT 911 form at University of San Francisco (USF) to address violence, so affected students can articulate what justice looks like to them.

“That can be a space where victims are really centered,” she said. “It’s not like ‘Oh, the school is punishing the perpetrator, but there’s no transparency on how they’re being punished,’ which I think is something that is very prevalent, especially with sexual assault.”

Dr. Justin Leroy, an assistant professor in the history department at UC Davis, said that he tries to subvert the idea that if there wasn’t policing, society would be overrun with violence.

“That means thinking about social contexts that lead people to commit harmful behavior,” he said. “The people who do the most harm in society through environmental damage, defrauding hundreds or millions of people — these are not people we consider ‘criminal,’ so why are we so concerned about public safety? Are we even looking in the right place?”

‘Abolition Is Not Just About Getting Rid Of Something

Those participating in Abolition May aim to show that a future without policing isn’t abstract, but materially possible. The work toward this abolitionist future is not new on college campuses, as many groups have already been creating alternatives.

Natalya Bomani of the Abolition Collective said Monday’s work stoppage was one way to remind people that they have the power and agency to refuse doing things that keep structures going.

“This is a good example of showing people that, ‘Hey, this is something you can do,’” she explained, “removing yourself from the university and saying ‘I’m not going to give you my labor if you’re not going to be an accountable structure to marginalized students, to Black students, et cetera.’” 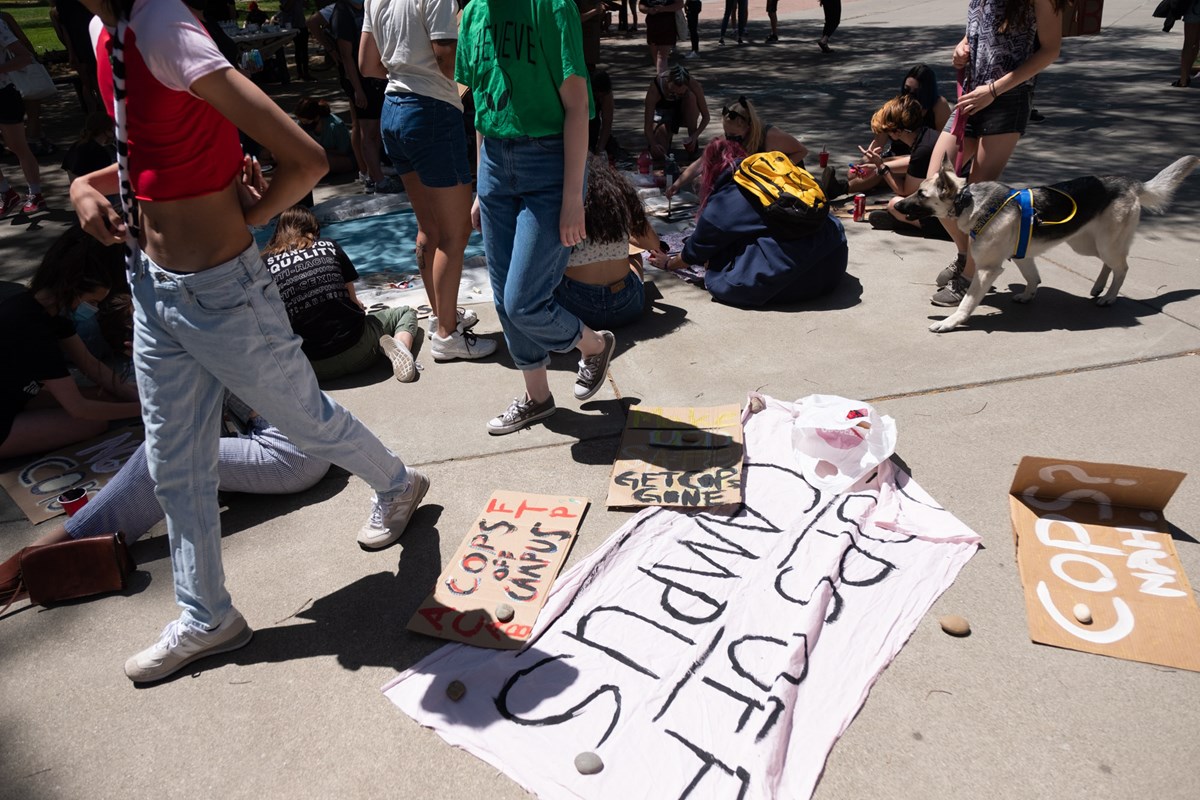 A group paints signs calling for the abolition of police on the UC Davis Campus, Monday, May 3, 2021.Andrew Nixon / CapRadio

Bomani also helps out with Black Queer Groceries, which provides rent relief and groceries for queer and trans Black people across the Bay Area. It’s partnered with organizations like People’s Breakfast Oakland and has raised over $30,000 since the beginning of the COVID-19 pandemic.

“If you have the capability to go talk to your neighbors,” she said. “Go give them that bag of groceries — obviously, with COVID, we have to do it safely. But there are ways we can directly talk and engage with each other.”

Meanwhile, in classrooms, organizers have suggested professors start a conversation about abolition with their students through a lecture created by Dr. Leroy, the UC Davis professor.

Leroy studies the history of slavery and emancipation in the 19th-century United States. He said that the connection between 19th- and 21st-century abolitionists is that they’re both undertaking a campaign to change their world.

Leroy said that his job wasn’t to tell people why they were wrong or to invalidate anyone’s perceived positive experiences with police. Instead, he asks people what they need to be safe and secure as a starting point for further conversations.

“Usually, the first thing that comes to mind isn’t police or bad people in prison,” he said. “Maybe people need to feel like they’re housed or their family is secure and isn’t going to be hurt. What’s the best way to ensure that?”

Bomani has used Leroy’s tactic of asking questions to talk to her parents about safety.

“Even though my parents are Black and have direct experience with police violence, it’s still really hard to move away from that structure,” she said. “I try to prompt them to look internally and think about a model of safety that could work to keep their kids safe — like, it would be cool if I could talk to my neighbor and have them watch my kid or other things like that.”

Tran of the Abolition Collective said that a future without police is one rooted in strong trust and care within communities.

“All of this is based on building relationships with each other, something grounded in our humanity,” Tran said. “This thing that we’re growing is an ongoing effort and movement, always. Abolition is something to be grown right where you are, at home and with your loved ones.”

Abolition May actions conclude May 25, the anniversary of George Floyd’s death. The Cops Off Campus Coalition plans to continue forging relationships with grassroots organizations and trade unions, among other groups, in advance of its goal to see UC and CSU police gone by fall 2021.