FACT CHECK: Did San Francisco Have ‘Twice As Many Drug Overdose Deaths As COVID Deaths’ In 2020? 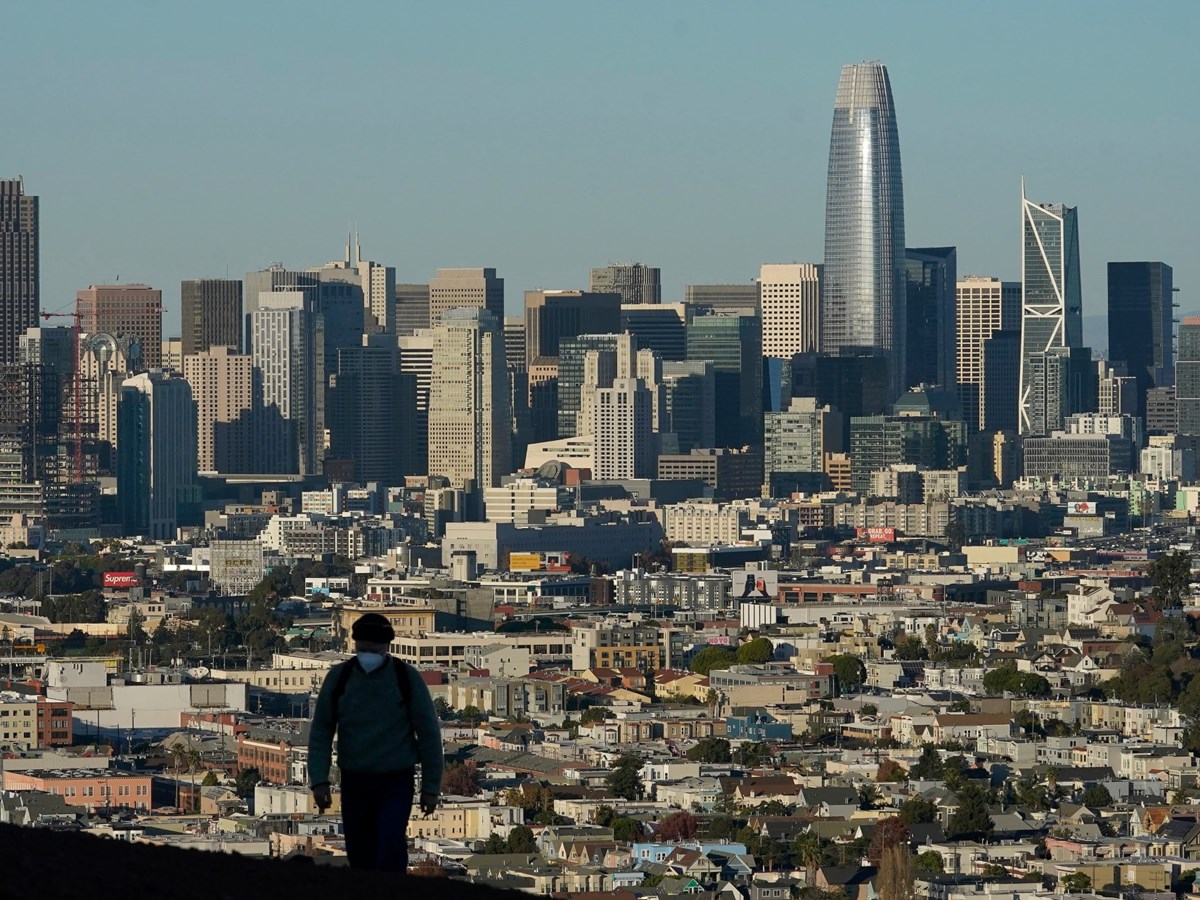 In this Dec. 7, 2020, file photo, a person wearing a protective mask walks in front of the skyline on Bernal Heights Hill during the coronavirus pandemic in San Francisco.

San Francisco’s early and dramatic response to the coronavirus last year earned it praise as a model for fighting the pandemic. But during that time, was the city also experiencing a surge of fatal drug overdoses that far outpaced its COVID-19 deaths?

“San Francisco had twice as many drug overdose deaths as COVID deaths last year. This true state of emergency is met with political indifference if not encouragement,” Kiley wrote on Twitter on April 26.

Kiley has filed numerous legal challenges against Gov. Gavin Newsom over the past year, claiming the Democrat and former San Francisco mayor has overstepped his authority during the pandemic.

We decided to fact-check the first part of his claim, which took off on Twitter and was shared more than 2,000 times within two days.

Did Kiley get his numbers right? Data from the city’s public health department and medical examiner’s office support his case.

San Francisco was the first city in the nation to declare a coronavirus emergency in February of 2020, weeks before other major metros. The response contributed to San Francisco having one of the lowest COVID-19 death rates among major cities early last fall.

As of late September, San Francisco was averaging about 12 deaths due to the coronavirus per 100,000 people. The next lowest city, Seattle, was averaging nearly three times as many deaths, according to Healthline.com, a health news and information website.

By the end of last year, San Francisco, which is home to nearly 875,000 people, had tallied 257 deaths due to the virus, according to data from the city’s Department of Public Health. That total increased rapidly this winter as the virus surged across California and many parts of the country. It now stands at 531 since the pandemic started, according to recent data.

A Look At San Francisco’s Drug Overdose Deaths In 2020

Though the article doesn’t point to a specific source, we found a report by the San Francisco Office of the Chief Medical Examiner that more than backs up Kiley’s claim.

The report listed 697 accidental drug overdose deaths from January through December 2020. It describes the data as preliminary. 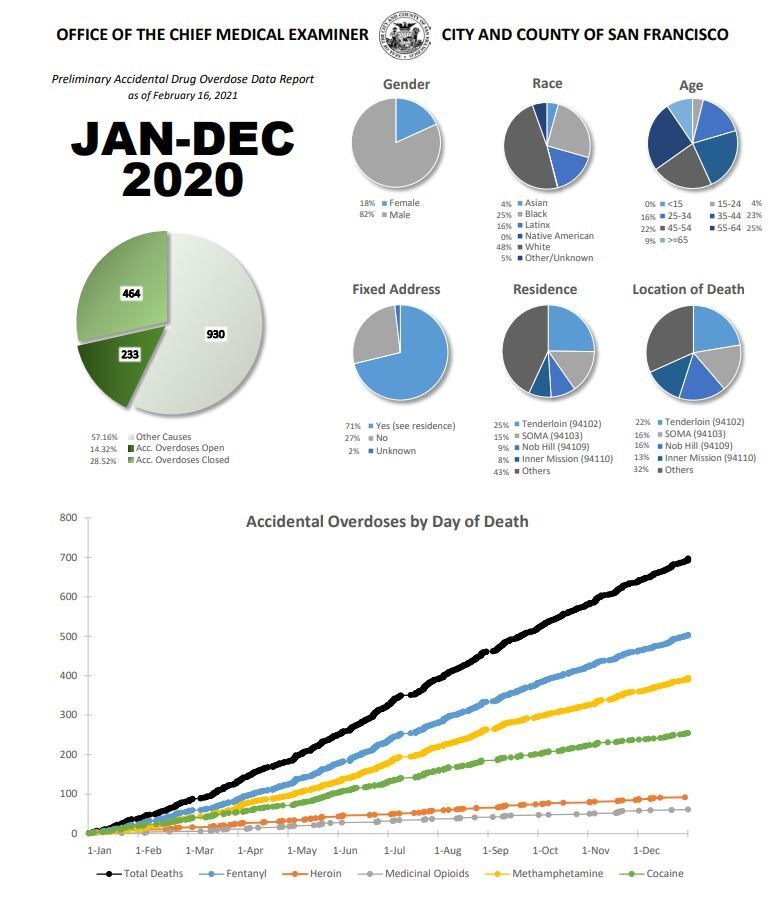 This is a screen shot from a February 2021 report on accidental overdose deaths by the San Francisco Medical Examiner’s Office.

Still, that total is more than two and a half times San Francisco’s COVID-19 deaths from last year. It is triple the city’s total from 2017, according to the Times article.

San Francisco health officials say two key factors caused the spike in overdose deaths: The spread of the powerful opioid fentanyl across the city, and the isolation and despair created by the pandemic.

“These deaths were on the uptick before the Covid pandemic. But much about the pandemic really impaired our ability to address it,” said Margot Kushel, professor of medicine at Zuckerberg San Francisco General Hospital and Trauma Center. “There’s no question we are losing way too many people to this preventable cause of death.”

Kristen Marshall is project manager for the Drug Overdose Prevention and Education Project, a city-funded program that coordinates San Francisco’s response to overdoses. She told the San Francisco Chronicle that the stay-at-home order led people to use drugs alone, which can be more deadly than when someone uses them under supervision.

“People at high risk went into isolation and that heightened the risk. The chaos put people at higher risk,” she said. “The worst months were in the dead of the summer when it was most chaotic for this community."

Kushel said communities can reduce overdose deaths by creating “safe injection sites,” or places where people can inject drugs under the watch of trained medical staff. Those sites are legal in Canada, Europe and Australia, but illegal in the United States.

Advocates say they provide professional supervision and a chance to connect people with treatment services. The California State Senate passed SB 57 this month to start a pilot program allowing safe injection sites in San Francisco, Oakland and Los Angeles County. To become law, it would need approval from the state Assembly and Gov. Gavin Newsom.

Kushel said communities can also reduce harm by providing drug testing services to identify deadly opioids such as fentanyl, which is often mixed into other drugs without a person’s knowledge.

Hoover, Kiley’s chief-of-staff, did not respond when asked what solutions the state lawmaker had for San Francisco or other places grappling with the drug overdose crisis.

Data from the city’s public health department and medical examiner’s office support the lawmaker’s claim. It should be noted that San Francisco had one of the lowest per capita COVID-19 death rates of any major cities.

Still, the city’s overdose deaths climbed rapidly during the pandemic compared with past years, reaching nearly 700 while the total coronavirus deaths was 257.

We rated Kiley’s claim as True.