How To Get A Vaccine Appointment In California, And Other Things To Know About The Vaccine 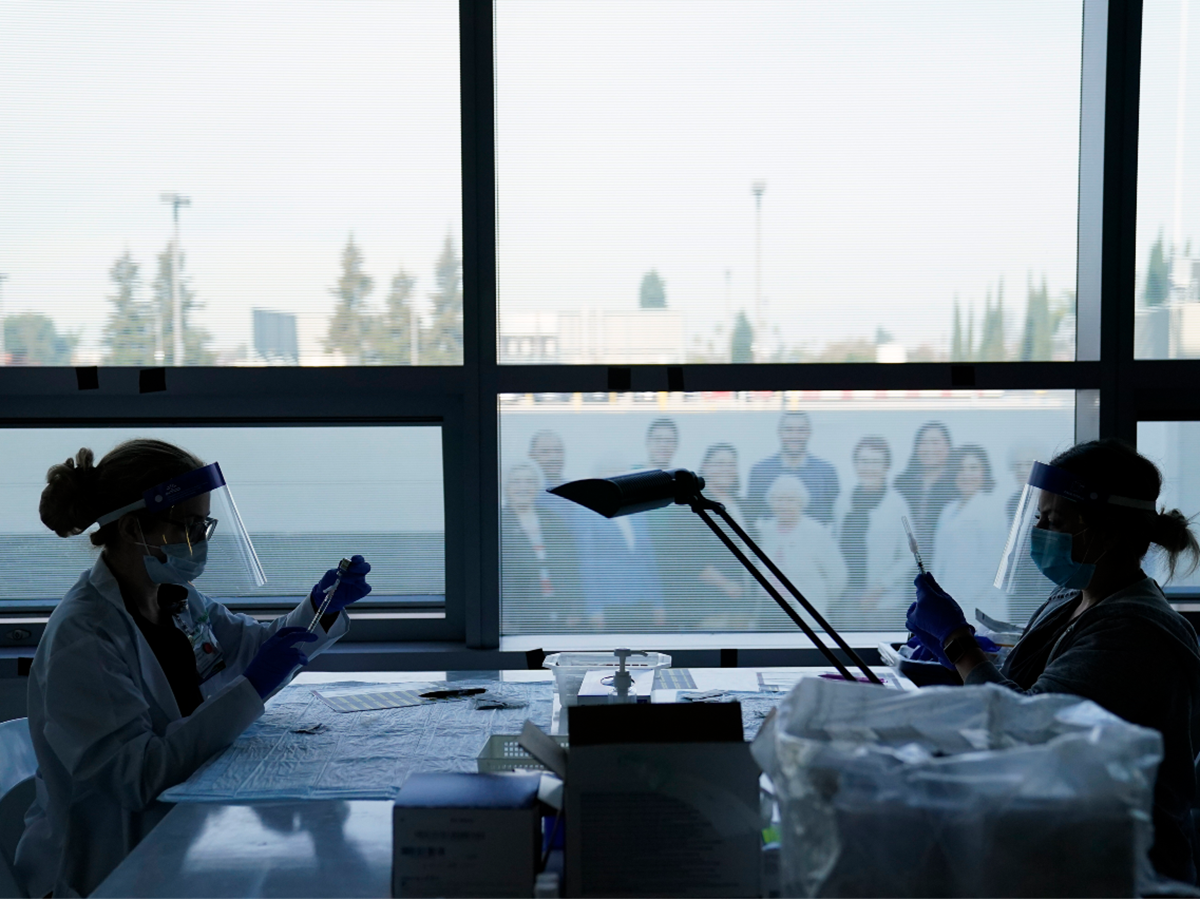 While California started vaccinating health care workers and other high-risk residents in December, there are still a lot of questions about how to get vaccinated in the state.

Over time, California has shifted the groups eligible to receive the vaccine, with many potential ways for residents to sign up for a dose. The process has been frustrating for many.

As of May 13, all California residents 12 and older are eligible to sign up for vaccine appointments after the Pfizer vaccine was approved for children as young as 12.

Below, you can find our best answers to how the state is handling the roll-out (see the state's vaccine website here) but know that the details are changing. We will continue to update this page as new information comes out.

Who is eligible to get vaccinated right now?

How can you get the vaccine if you're eligible?

There are a number of different options to get a vaccine appointment if you're eligible, but things can change depending what county you live in.

A first place to start is MyTurn, California's statewide vaccination website where residents can sign up for appointments or to be notified when they can get a vaccine in a number of counties.

This includes children 12-18 years old. If you are a parent, check with your child's pediatrician about other options as well. Some pharmacies, such as CVS, are also scheduling appointments for children.

California is also offering a telephone hotline for appointments — in multiple languages — to help reach Californians without internet access at (833) 422-4255.

You can also work with your county health department, though availability and how to sign up is different in each county.

You can also work with your county health department. For example, Sacramento County has details on the county's vaccine information site here.

Sacramento County has a webpage where you can sign up for vaccine appointments at various sites here, including California Northstate University, McClellan Park and other locations. The page is updated as new appointments are available.

For more information, contact the county by email at [email protected] or call the hotline at 916-875-3400.

Here are some vaccine information sites for other nearby counties:

Several pharmacies are also offering appointments at locations around California for eligible individuals, including:

People who aren't UC Davis Health patients can also schedule an appointment at this link.

There is also an independently run directory of clinics and health systems administering the vaccine, including information about how to make an appointment. This directory was created by volunteers who are calling individual locations every 36 hours to find out what vaccines are available and for whom. CapRadio has not verified the information on this site.

What groups did the state recommend get the vaccine, and in what order?

As of May 13, all people 12 and older are eligible to be vaccinated in California.

The age-based framework is coupled with a vaccine distribution approach that prioritizes disproportionately impacted communities, places and people to ensure those eligible for vaccines within these communities are more likely to receive it.

Here is a look at the phases California had previously used to determine eligibility:

Health care workers and residents of long-term care facilities were eligible to get the vaccine first. That process started in December 2020. There are three tiers within that phase, sorted by what type of facility the worker is in:

The state recommended that hospitals and health departments administer vaccines to people in Phase 1A and Phase 1B concurrently during January and February.

Here are more details from the state health department on which jobs qualify.

What has changed in the state’s tier system since January?

On Jan. 14, the California Department of Public Health announced that people 65 and older were eligible to receive the vaccine, moving them up from their original spot in a lower tier.

Then on Jan. 25, Gov. Gavin Newsom announced that vaccine priority will be determined only by age, not by occupation or underlying condition. This meant that after everyone in Phase 1A and the first tier of Phase 1B had been vaccinated — people over 65, food and agricultural workers, educators and public safety employees — the state would announce new eligibility by age brackets.

On Feb. 12, the state also announced that people with some severe health conditions would be eligible to start receiving vaccinations starting March 15.

This meant that people who were originally in the second tier of phase 1B and in phase 1C were no longer being prioritized. Those groups included:

On March 1 the state shifted management of its vaccine distribution to Blue Shield, with counties beginning to move to the new system, though as of March 12 many counties were negotiating how or if they would take part in the plan.

On March 3 officials announced 40% of all COVID-19 vaccine doses would go to the communities hit hardest by the pandemic, based on neighborhoods in the bottom 25% of its Healthy Places Index.

Do you need to be a resident of a county to get the vaccine there?

Each county is making their own decisions on who to vaccinate and whether to factor in what county someone lives in — there is no statewide guidance on this. In Sacramento County, people are being offered the vaccine based on where they work, or where they are a patient. So for example, if you live in Yolo County but you work or are a resident at a Sacramento County long-term care facility, you can still get vaccinated in Sacramento.

How do underlying conditions impact when you get the vaccine, and what qualifies?

On Feb. 12 state health officials announced that people 16 to 64 years old with certain severe health conditions would be eligible to receive a COVID-19 vaccine starting March 15.

Here’s a list of those health conditions, according to the state’s health department:

The state’s guidance also says that those in that age group could be eligible if, “as a result of developmental or other severe high-risk disability” the individual could die from COVID-19, stop receiving health care services that are “vital to their well-being and survival” or if getting COVID-19 care would be too challenging.

Medical providers will have the discretion to determine a patient’s eligibility. State health officials said the list of eligible conditions could change based on scientific data and analysis.

How did California decide who got the vaccine first?

California has a Drafting Guidelines Workgroup that’s developing guidance for how to prioritize allocation of vaccines. This group is housed within the California Department of Public Health and chaired by the chief of the department’s immunization branch and a past president of the National Medical Association. Its membership is made up of leaders from hospitals, academic institutions and health departments throughout the state.

There is also a Community Vaccine Advisory Committee made of representatives from dozens of organizations, including the American Civil Liberties Union, California Teachers Association and Disability Rights California, that looks over the state’s recommendations. The group holds virtual, public meetings to discuss priority groups and the reports back to the state.

I’m a health worker or a member of another priority group and I haven’t gotten a vaccine. What should I do?

Reach out to your local health department, they should be tracking calls that come in from eligible residents. If you’re a health provider that is part of a professional society, they may have additional information.

How many vaccine doses have been distributed in California so far?

Here are the latest figures from the California Department of Public Health:

Are there any safety issues with the vaccine?

Scientists at both the federal and state level have determined that the vaccine is safe and should be administered — except not to children under 16, people who are pregnant or people who are allergic to any of the ingredients in the drug. Though there have been documented side effects, vaccine experts say the benefits of taking the shot outweigh any potential negative consequences.

California created a Scientific Safety Review Workgroup, which began meeting in October to determine the safety of vaccines being approved by the U.S. Food and Drug Administration. The group notes side effects associated with both the Pfizer and Moderna vaccines during clinical trials, but stated these were “not at a level of concern to change the recommendation that COVID-19 vaccines are safe and effective.”

The group recommended that the federal government continue to monitor for side effects related to the vaccine. Neither therapeutic has been tested on pregnant women or children under age 12. People who are allergic to any component of either vaccine should not be vaccinated. There are special considerations for people who are immunocompromised.

On March 2, the group authorized the Johnson & Johnson vaccine, finding it to be safe and effective. On April 13, federal health officials called for a pause on the Johnson & Johnson coronavirus vaccine. The stoppage came after six women reported getting blood clots weeks after receiving the single-dose shot. One of them died. The FDA and the CDC have since lifted the pause.

What are the known side effects so far, both short and long term?

Data from the Pfizer clinical trials found the following most common short-term side effects:

In clinical trials, 64 of 38,000 people who received the Pfizer vaccine experienced lymphadenopathy (a disease of the lymph nodes), lasting for 10 days on average, which the CDC says is “plausibly related” to the vaccine. Four participants developed a type of facial paralysis called Bell’s palsy, which the CDC stated was not likely caused by the shot.

The most common side effects of the Johnson & Johnson vaccine are pain, redness and swelling at the injection site and tiredness, headache, muscle pain, chills, fever and nausea.

As of Jan. 26, 2021, 29 people in the U.S. had experienced a severe allergic reaction to the vaccine, and none had died. These reactions were from both the Pfizer and Moderna vaccine, and were not clustered geographically. A January CDC report estimated the rate of anaphylaxis at 11 cases per 1 million doses given, which is higher than the flu shot. The majority of anaphylactic reactions happen within the first 15 minutes of the shot, so health workers are urged to have epinephrine on hand and monitor the patient after immunizing.