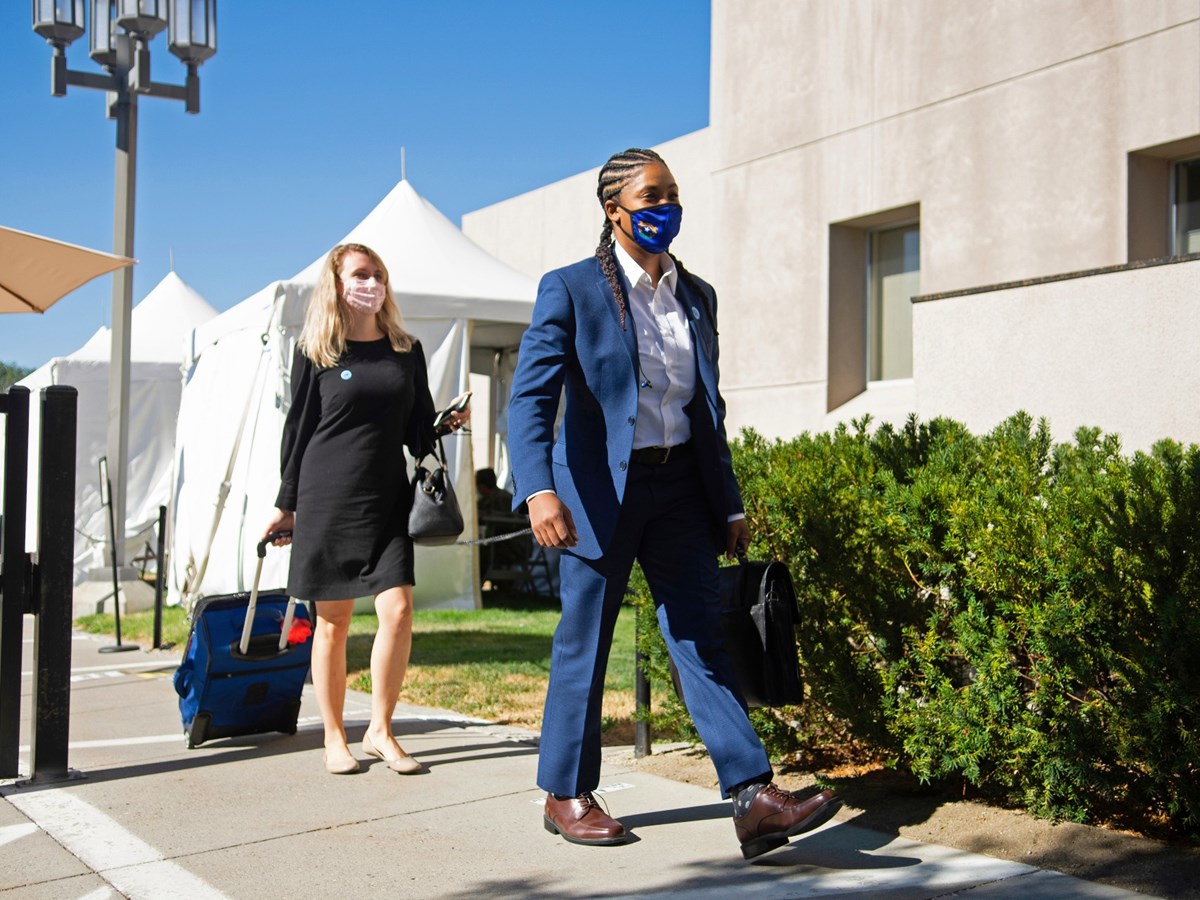 State Senators Dallas Harris, right, and Melanie Scheible arrive at the Legislature on Friday, July 31, 2020 during the first day of the 32nd Special Session of the Legislature in Carson City.

NOTE: This story will be updated as each bill moves through the legislature — or if it doesn’t. Want to follow a bill from introduction to final result? Here’s what I suggest: use Nevada’s online database of bills and resolutions. You can search by keyword, bill number and even set up alerts when actions are made. You can also browse a list of proposed legislation organized by topic.

Also, if you want to weigh in on a bill, I encourage you to reach out to its sponsor (find out who your state representatives are here) or attend committee hearings virtually where the public is given time to comment. You find out when and where committee hearings are through the Nevada Electronic Legislative Information System site for the bill you are interested in. The legislative session will last until May 31, 2021.

Nevada’s state legislature met last summer for a special session focused on criminal justice reform in response to racial justice protests over the police killings of unarmed Black citizens around the country.

They passed a pair of bills aimed at curbing excessive force and increasing transparency in law enforcement agencies, including a chokehold ban and a partial repeal of an earlier law dubbed the “Peace Officer Bill of Rights.” That legislation prompted criticism from advocates who say it unfairly shielded officers accused of misconduct from public scrutiny and oversight.

At the end of the special session, Democratic leadership told CapRadio they weren’t finished and promised this year’s regular legislative session would include further reforms.

“Everything that we do addresses the disparate impact that a lot of the things that we’re going through have on certain communities — in particular communities of color,” Assembly Speaker Jason Frierson said.

Now that lawmakers are back in Carson City, they’re considering a raft of bills that could change everything from the way Nevada administers traffic tickets to the wages inmates receive while they participate in prison work programs.

Below is a list of bills that Nevada lawmakers are considering this session.

AB116 and AB151 were exempted from a key deadline requiring bills to pass out of their house of origin — in this case, the Assembly — or else they’re considered dead. The bills have been sent to the Committee on Ways and Means, which analyzes the potential financial impact of new laws.

Under existing law, Nevada treats minor traffic violations as criminal charges. If someone gets a ticket for a broken tail light, for example, they have to pay the fines or the judge can issue a warrant for their arrest.

Folks who can’t afford to pay down their tickets can find themselves trapped in a cycle of escalating charges, as late fees, processing fees and even warrant fees get added to the original infraction.

The burden of this punitive status quo also falls disproportionately on Black Nevadans and other communities of color. A 2015 investigation by the Las Vegas Review-Journal found almost two-thirds of residents in payment plans with the municipal court lived in historically Black and Latinx zip codes.

But the bill could encounter resistance from courts. In a written statement included with Carson City’s report on collection rates, Court Administrator Maxine Cortes argued that the threat of license suspension helps guarantee that people will pay their traffic fines.

SB50 was unanimously approved by the Senate on April 20. It was sent to the Assembly, where it will to be heard in the Judiciary Committee before it’s eligible for a vote.

Before moving forward, it was amended to define exactly what constitutes a no-knock warrant. The amendment also limits no-knock warrants to felony searches and arrests and establishes other requirements that must be met for that kind of warrant to be granted by a judge.

Attorney General Aaron Ford’s office submitted a bill that would limit the ability of law enforcement agencies to obtain “no-knock” warrants, which allow cops to enter premises without announcing themselves in advance.

The bill, Senate Bill 50, would restrict the circumstances under which a judge can issue that type of warrant. If it passed, law enforcement officers seeking one would have to “demonstrate that the underlying crime involves a significant and imminent threat to public safety, and giving notice is likely to create an imminent danger to the life of officers executing the warrant or to another persons.”

It was specifically introduced as a response to public outcry over the police killing of Breonna Taylor, an unarmed Black emergency room technician who was shot to death in her apartment in Louisville, Kentucky by plainclothes police officers serving a no-knock warrant. Although they claimed her ex-boyfriend may have been storing controlled substances at her apartment, the officers didn’t find any drugs and Taylor never faced criminal charges related to drug trafficking.

“From the perspective of the subject, he or she only knows that armed persons have violently entered his premises,” Ford told lawmakers during a hearing on the bill. “The situation is rife with danger for both law enforcement and subjects.”

AB186 passed the Assembly 41-1 on April 15, and is now eligible for consideration in the Senate Committee on Government Affairs.

The bill frames the issue in terms of safeguarding the rights of individual officers, who are already guaranteed certain protections under a section of the Nevada Revised Statutes known as the “Peace Officer Bill of Rights.”

The measure has support from the Nevada Police Union, which represents officers working for state agencies.

Daniel Honchariw of the libertarian-leaning nonprofit Nevada Policy Research Institute also expressed support for the bill, which he said would reduce the potential for disparate impacts of policing on marginalized communities.

“Never should law enforcement be incentivized to find crime,” he told the Assembly Committee on Government Affairs. “When police are incentivized, financially or otherwise, to locate potential criminal activity, it is lower-income, minority neighborhoods which suffer most.”

AB157 was amended to specify that someone who has the police called on them “without reasonable cause” may seek civil penalties against their harasser. It was approved by the Assembly on April 13 and referred to the Senate Committee on Judiciary.

The name Karen went viral after Christian Cooper, a Black birdwatcher walking in Central Park, posted a video of a white woman calling the police on him when he asked her to put her dog on a leash.

"I'm going to tell them there's an African American man threatening my life," she told him.

While the woman in the video was actually named Amy Cooper, “Karen” has become shorthand to describe entitled white women who call the police in order to harass or intimidate Black people and other people of color — and the systemic racism that allows them to weaponize their privilege.

AB157 would create civil penalties for those who falsely call the police in order to harass or intimidate someone else based on their race, religion, gender identity and other identifiers. The victims of such false reports could only seek civil damages if the call was unjustified.

AB230 has been amended to keep direct filing in place for certain crimes, including murder or attempted murder and school shootings.

If passed, the bill would also require the Legislative Committee on Child Welfare and Juvenile Justice to evaluate the cost and space considerations of incarcerating youth convicted of crimes under the expanded authority of juvenile courts.

AB230, which has bipartisan support, would change the way juvenile offenders are charged and prosecuted for serious crimes.

The bill would end the practice of “direct filing,” which allows district attorneys to charge juveniles as adults in criminal court if they’re accused of committing a felony and they’re at least 14 years old.

It would also end the practice of “mandatory certification,” which requires youth who are 16 or older — or those with prior convictions — to be treated as adults if they’re charged with certain crimes including murder, sexual assault, the use of a firearm during an offense and other serious felonies.

Prosecutors, including staff at the Clark County District Attorney’s Office, told the Assembly that the juvenile system doesn’t currently have the capacity to take on all cases involving underage offenders. The amendment, which keeps certain offenses in the jurisdiction of adult criminal court, is a response to that criticism.​

AB268 was unanimously approved by the Assembly on April 20 and referred to the Senate Committee on Judiciary.

An amendment to the bill would require law enforcement agencies to publicly post written use-of-force policies on their websites, but excludes the Department of Wildlife from the provisions of the bill.

Miciah Lee was an 18-year-old Black Sparks resident killed by police after his mother called 911 for help while he was experiencing a mental health crisis and threatening to kill himself.

Multiple police units pursued Lee and set up roadblocks in an attempt to remove him from his vehicle. Body-worn camera footage released by the Sparks Police Department shows that when he finally came to a stop after getting stuck on a median strip, officers responded with guns drawn and a police dog, which was sicced on him as he sat in the disabled car.

In the seconds that followed, one of the officers claimed Lee reached for the handgun his mother had warned them about, and opened fire. After an investigation of the shooting, the Washoe County District Attorney’s office declined to file criminal charges against the officers.

AB268, introduced by Republican Assemblywoman Lisa Krasner of Reno, would require all law enforcement agencies in the state to adopt written use-of-force policies.

It would also mandate that officers use crisis intervention techniques and other alternatives to violence when the situation allows, especially when they’re dealing with someone in the middle of a mental health crisis. The bill also requires departments to send officers who have received crisis intervention training to calls involving suicidal individuals, where possible.

The Reno-Sparks chapter of the NAACP helped present the bill, which they support. But the proposed law also refers to the controversial “reasonableness standard,” which is often used to defend police use-of-force incidents in court.