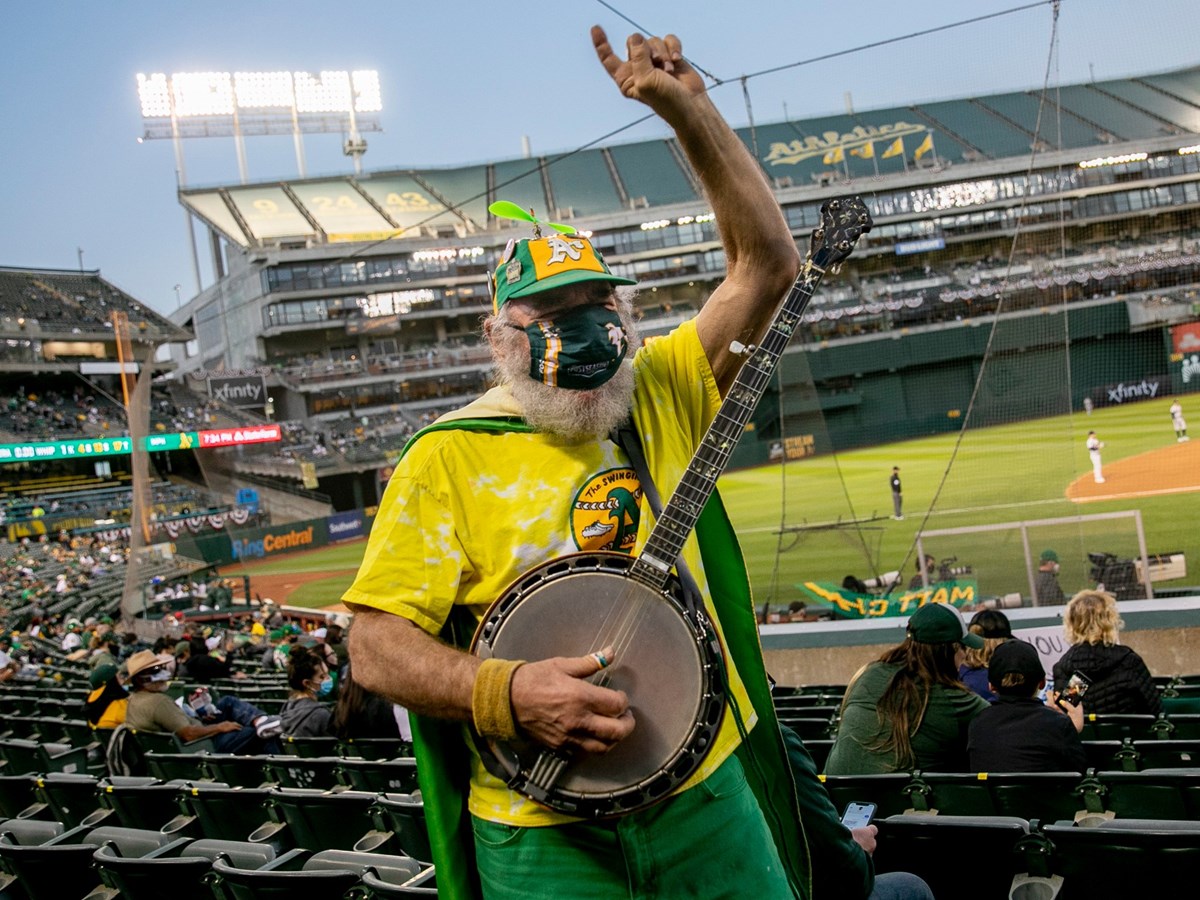 San Francisco resident Stacy Samuels, also known as Super A or Banjo Man, plays the banjo while cheering in the stands. Samuels, who has been bringing his banjo to Athletics games for more than 30 years, said “It’s great.

Long before he watched the windup to the first pitch, even before he entered the Oakland Coliseum, Sergio Santillan of Hayward was already feeling emotional.

“I kinda wanna cry. I’m just loving it,” he said, beer in hand, perched on a cement divider in the parking lot.

Last year would have been Santillan’s third year as an A’s season pass holder — but then it all came to a screeching halt. The emergence of the coronavirus pandemic triggered a California shutdown, and the season was postponed and then closed to live fans, who were replaced by cardboard cutouts. 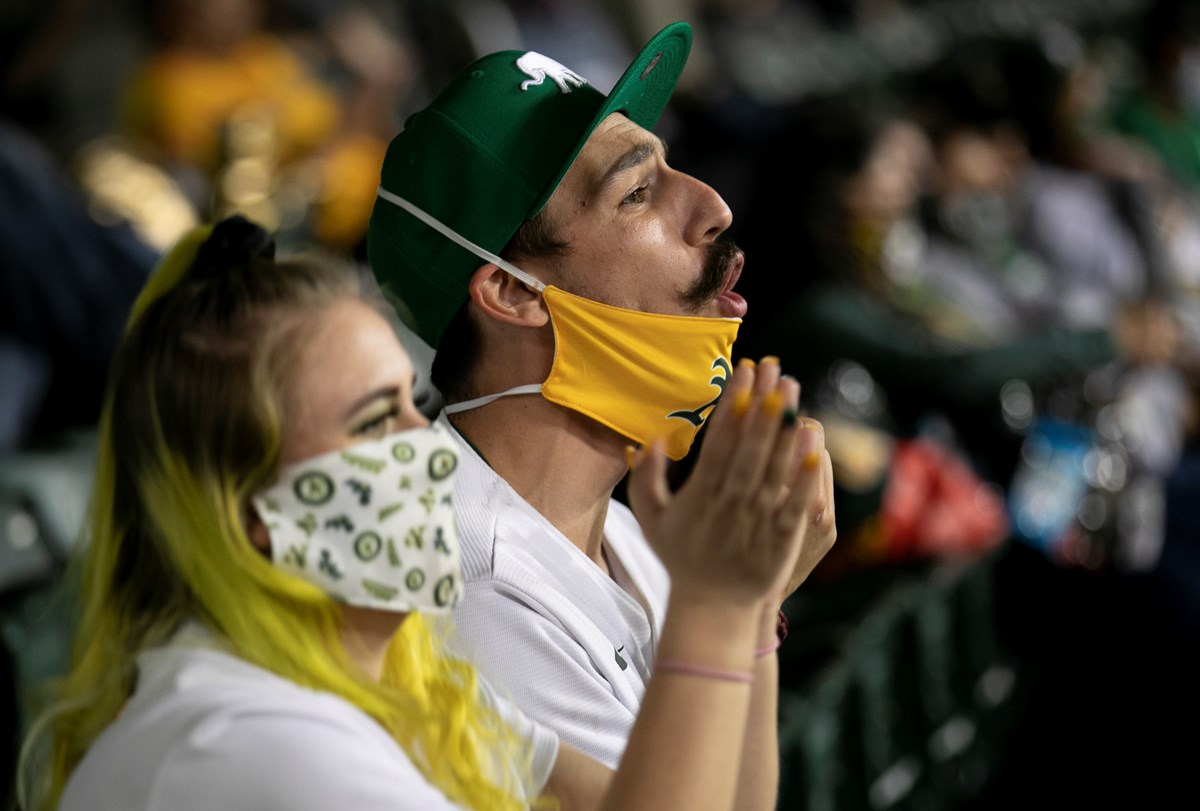 Darby Nastasia, left, and fiancé David Baker, cheer from the stands. “ I cried a little bit,” said Nastasia of being back at Coliseum after more than a year.Anne Wernikoff / CalMatters

But last night, Major League Baseball welcomed spectators back to stadiums for regular season games for the first time since October 2019. The significance of Californians returning to a large public gathering — albeit masked and socially distanced, and stadiums at about a quarter of capacity — wasn’t lost on anyone. And it was underscored by an inescapable reminder: In the parking lot just behind the stadium, occupants in dozens of cars were lined up to receive their Johnson & Johnson COVID vaccine.

For baseball fans who turned out at California stadiums to watch openers by the Los Angeles Angels, San Diego Padres and Oakland A’s, the experience wasn’t exactly the same as before the pandemic. But the general consensus was that it felt good to be back. 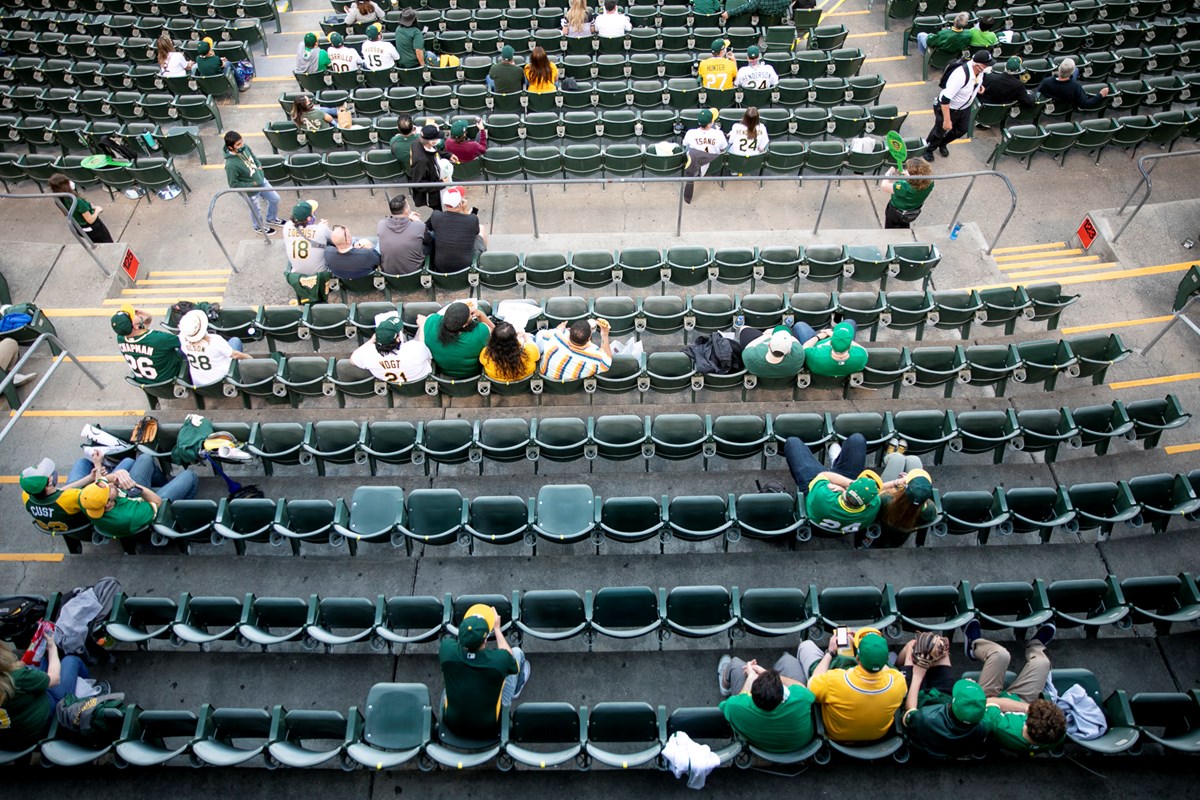 Fans sit in pods of two to four during the game in order to maintain sufficient space between groups.Anne Wernikoff / CalMatters

“I was here before I was born. In this stadium and every year since,” said Kurt Samuels, a perennial season ticket holder for Oakland’s baseball team, the A’s, and football team, the Raiders. “The A’s winning or losing is such a tradition and to not have that last year made what was happening in 2020 that much more real,” he continued. “This last year has been torture.”

The pandemic disrupted the 2020 baseball season, as it did so many other things. Season openers were initially postponed from April to July, and the regular season was ultimately cut short to only 60 games rather than the usual 162. Fans were excluded from attending, to reduce the risk of COVID-19 transmission. 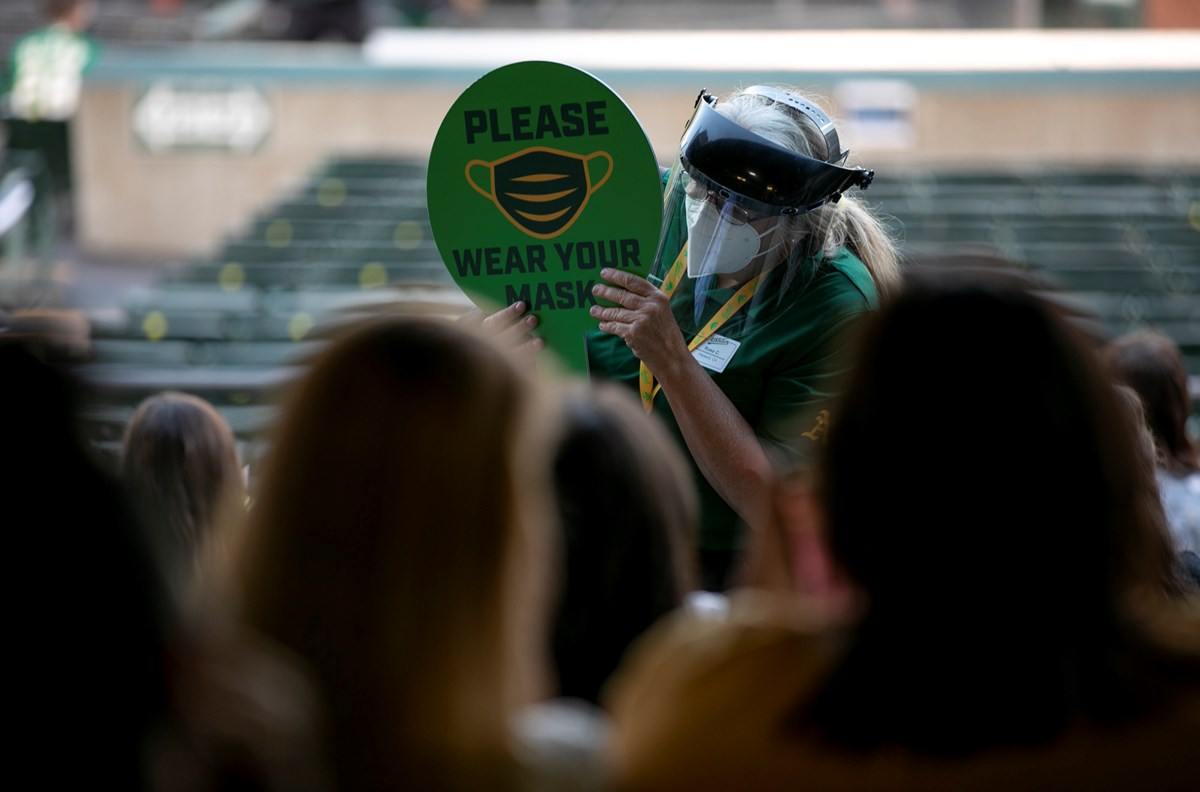 A Coliseum service employee carries a sign through the stands reminding fans to wear as mask. The Coliseum implemented a number of safety protocols for the season opener including masking, distancing and touch free payments for concessions.Anne Wernikoff / CalMatters

But as spring of 2021 loomed, the prospect of attending a baseball game enticed Californians. It was no coincidence that Gov. Gavin Newsom — facing a potential recall election fueled in part by dissatisfaction over pandemic restrictions — staged his annual State of the State speech last month at a virtually vacant Dodgers Stadium, where he promised a return to at least semi-normal life.

Oakland, in Alameda County, falls in the orange tier on the state’s hierarchy and thus could have filled a venue to a third of capacity. But the smaller size of the Coliseum meant that A’s fans were limited to quarter capacity, or just over 12,000 attendees, to ensure six feet of social distancing between pods of two to four people. The Coliseum also required that all fans remain masked when not eating or drinking, and use cashless payments and ordering for concessions. 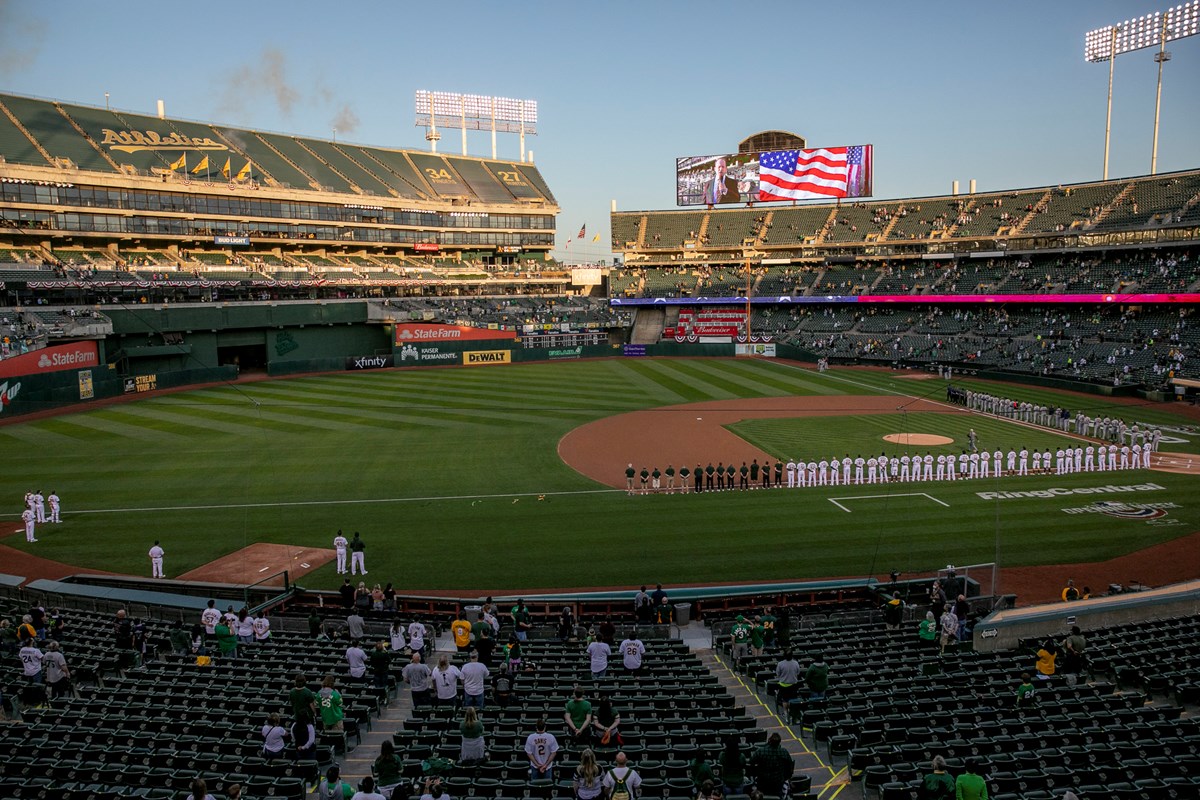 Players and spectators stand for the national anthem at the start of the game between the Oakland A’s and the Houston Astros. The Oakland Coliseum operated at 26% capacity in order to allow ample spacing between groups.Anne Wernikoff / CalMatters

The only hiccup? The cashless payment system, which caused some friction for fans who had a hard time accessing the app.

“We’ve been having trouble with mobile ordering,” said Darby Nastasia, her sparkly green eyeshadow and A’s mask matching the sea of green around her. But she and her fiance, David Baker, agreed it wasn’t enough to take away from the experience, saying they were “just happy to be in this environment.” The Coliseum eventually opened beverage purchases to credit card holders.

As for the outcome, the A’s lost, to the bad boys of baseball, the Houston Astros, giving A’s fans the chance to boo the trash can bangers who cheated their way to a World Series title in 2017.

But for the most part, fans were happy to comply if it meant they could enjoy a game in person. “It’s a little different,” said Tracy resident Michael Saenz. “It’s definitely fine, but different.” 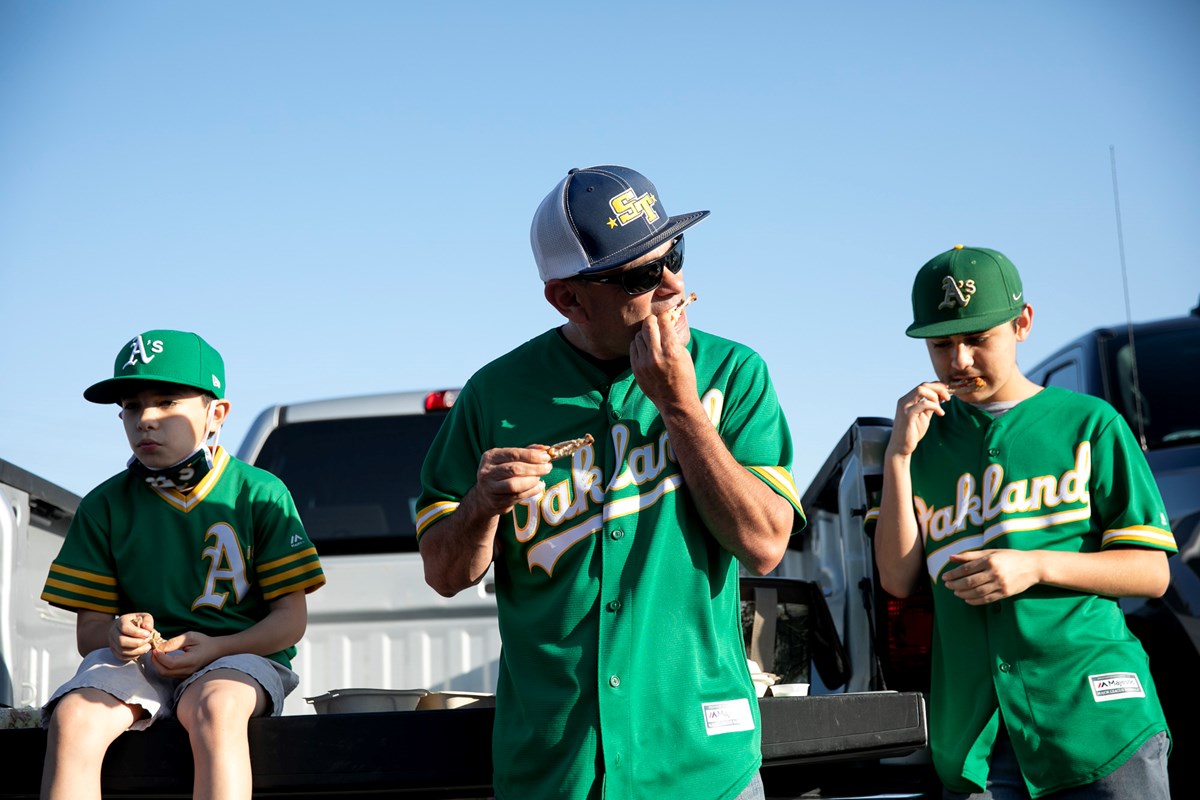 Ernie Robles, center, enjoys chicken wings in the parking lot with his sons Benicio, left, and Antonio, right, before entering the stadium for the start of the game. “Once I get in I’ll put my mask on. It’s the new, new, you know?”Anne Wernikoff / CalMatters 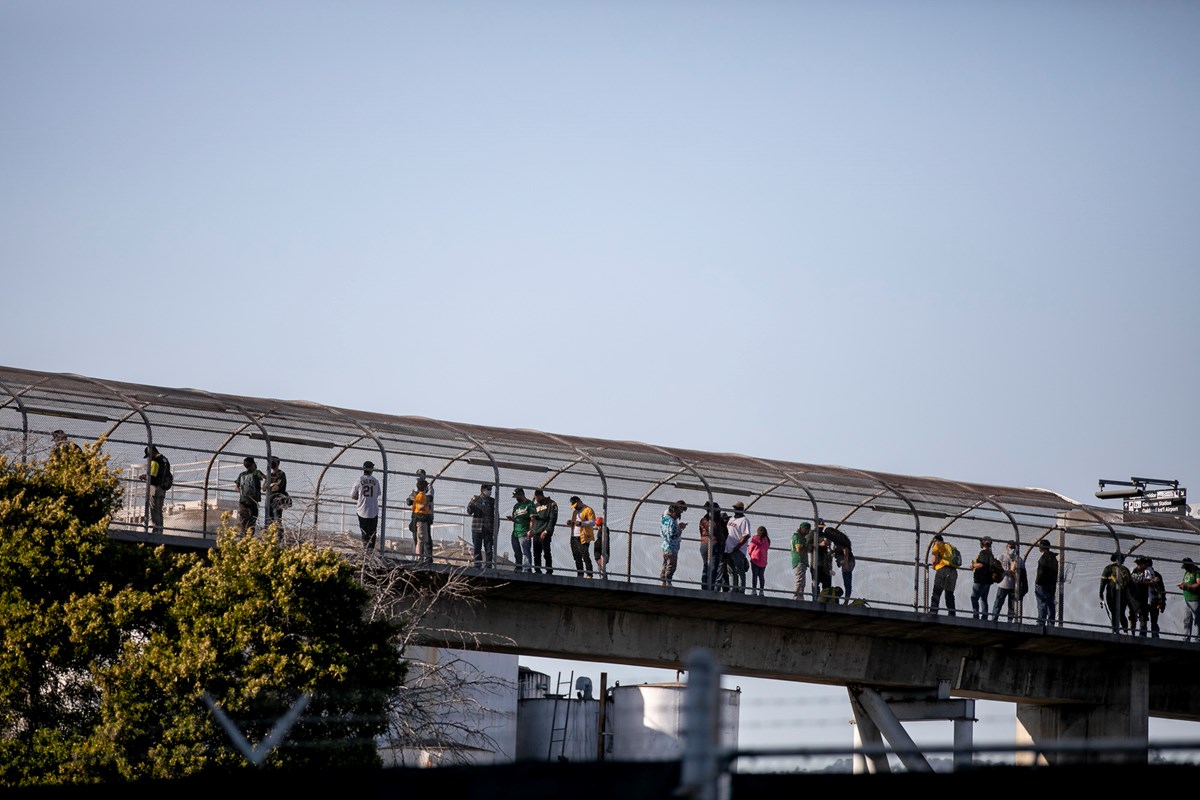 Fans distance as they wait to enter Oakland Coliseum before the season opener. The ballpark opened to fans for the first time since October 2019.Anne Wernikoff / CalMatters 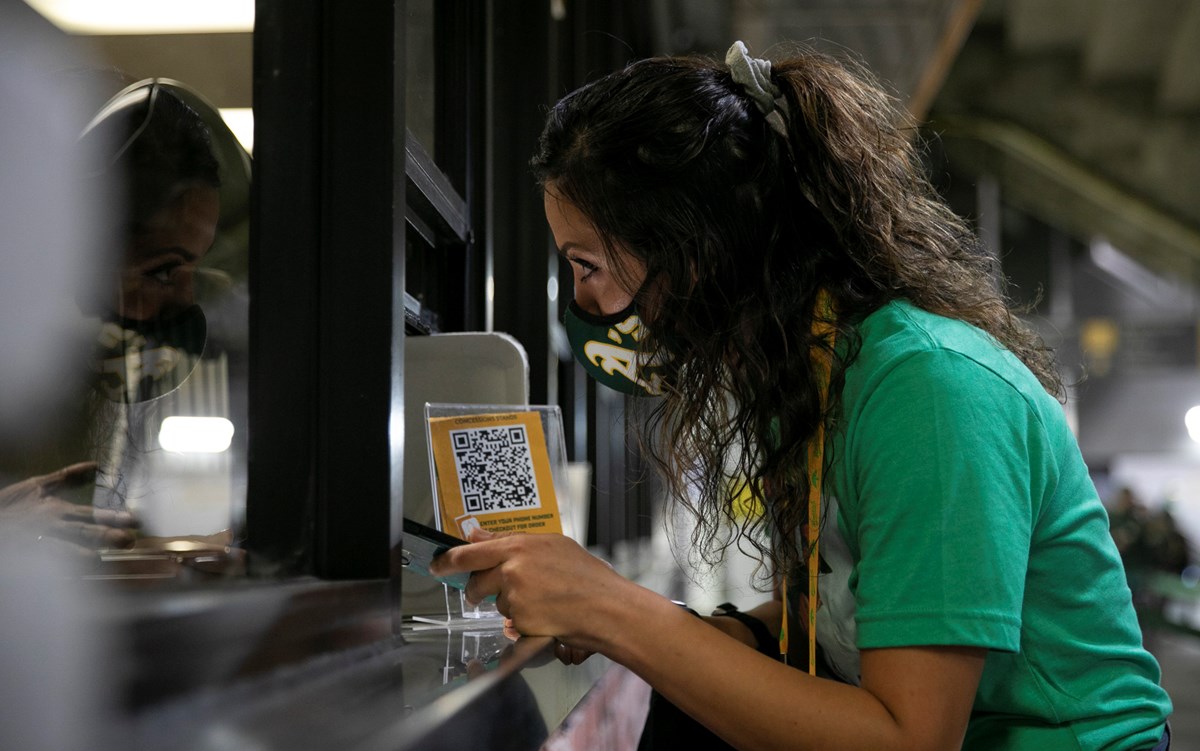 Talat Mirmalek of San Francisco speaks with a concessions employee while struggling to use the online ordering and payment app. “We’re missing the whole first half of the game right now,” her friend Sierra Coats said in frustration.Anne Wernikoff / CalMatters 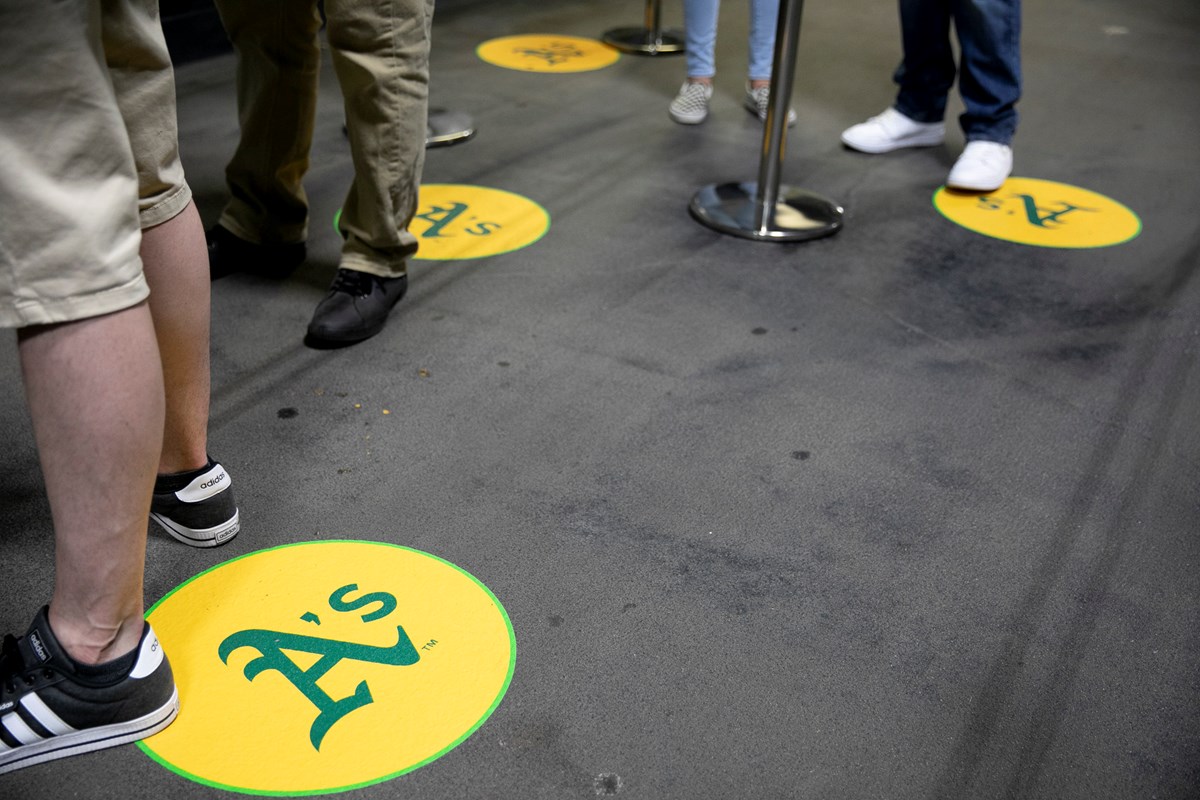 Fans socially distance as they wait in line to pick up orders at a concessions stand. Many struggled to use the online ordering and payment app, leading to lines and delays.Anne Wernikoff / CalMatters 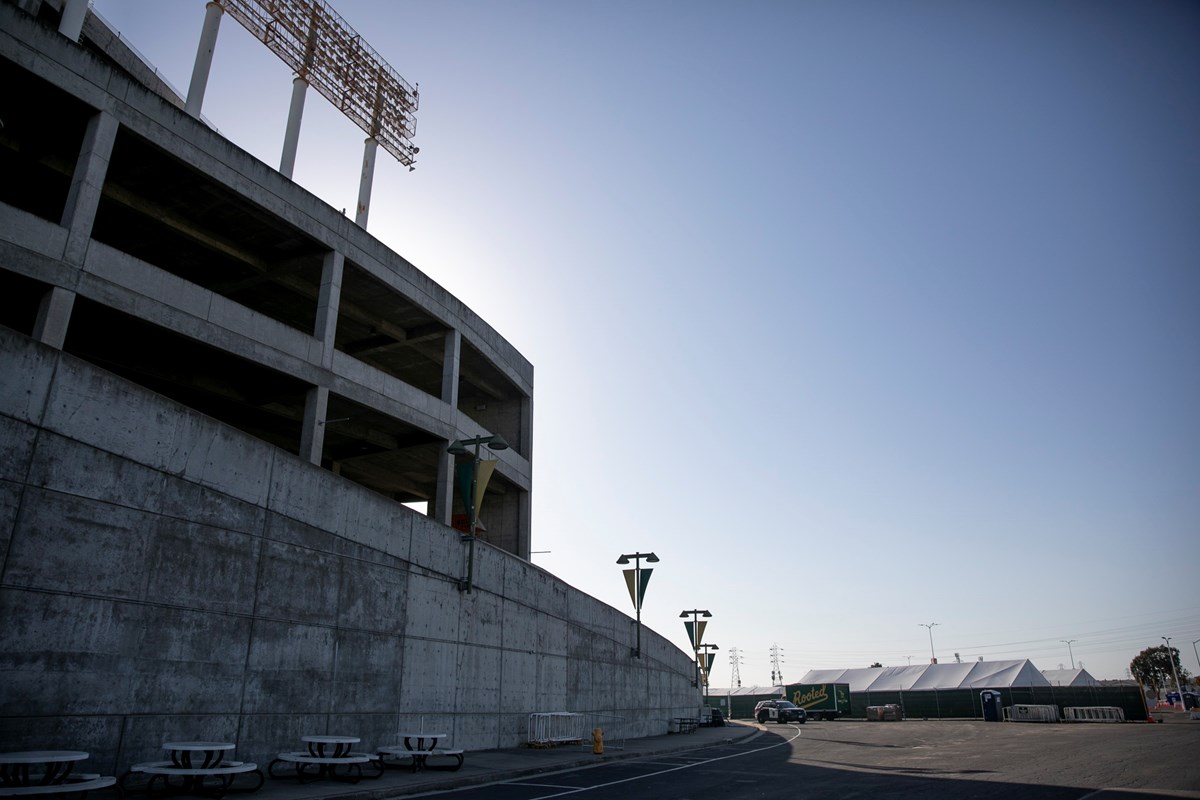 Tents housing the Coliseum COVID vaccination site can be seen in the background behind the A’s stadium on opening day.Anne Wernikoff / CalMatters 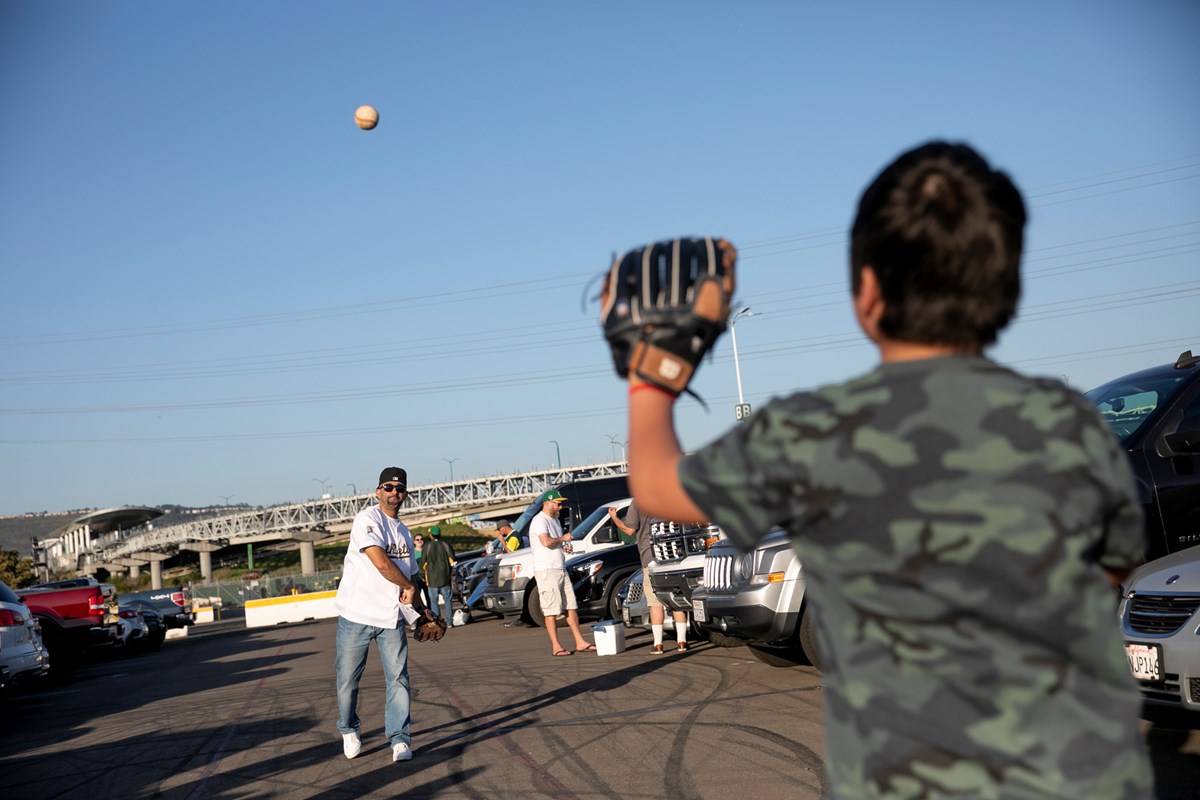 Perry Farahani throws a baseball with his son Jacob, 12, in the Coliseum parking lot. “It’s different than normal but I’ll take it,” he said of not being able to tailgate.Anne Wernikoff / CalMatters 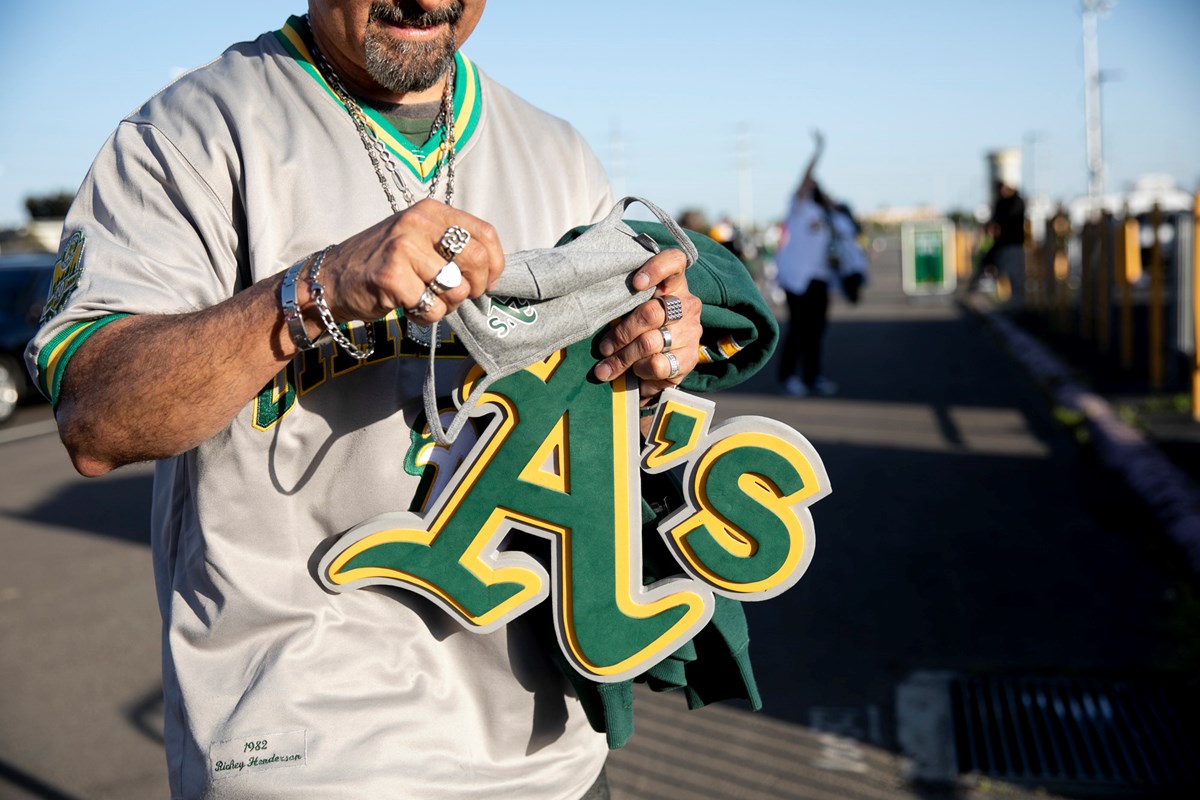 Andrew Rodriguez of Union City organizes his A’s apparel as her gets in line to enter the stadium before the start of the game.Anne Wernikoff / CalMatters
Follow us for more stories like this