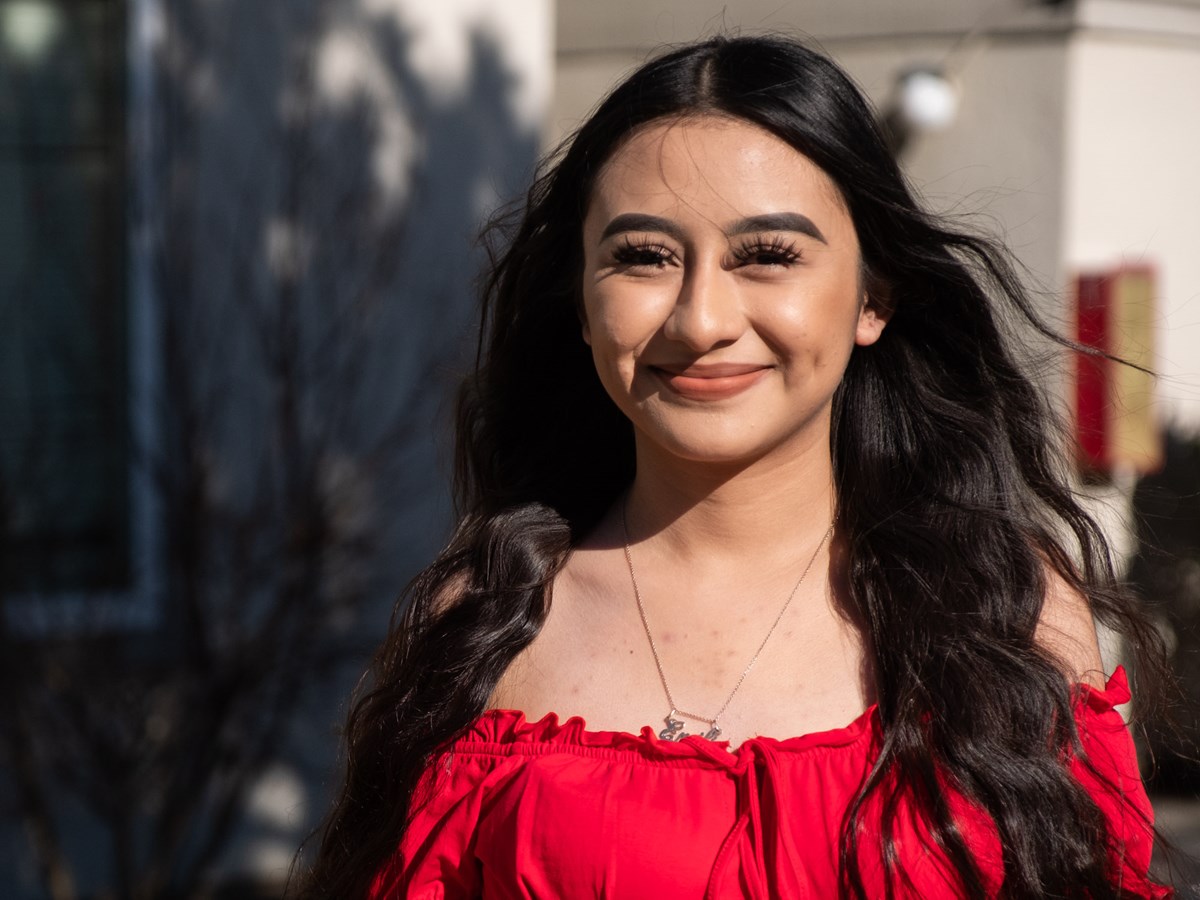 Emili Carillo near her home in Sacramento.

The 17-year-old moved from Mexico nearly four years ago with her dad, and works part-time as a cashier at a grocery store.

“Working has helped me a lot, because I have to practice my English,” Carillo said about chatting with customers on the job.

But learning English at her South Sacramento school — an entirely computer-based activity since last March — is another matter.

“It’s been hard for me,” she said about attending classes online, which eliminates opportunities to practice English with peers. “When we were at school … we kind of communicated more with our classmates. And this year, during the pandemic, we don’t even talk sometimes.”

As the momentum builds to reopen schools in California, early evidence suggests that English-learning students have fallen behind more than their peers.

Education experts say school leaders should act now to reverse a widening achievement gap between students with financial resources and kids with less support at home.

“Now is the time where we have to acknowledge that these gaps have widened during the pandemic and really be intentional about providing extra supports,” said Heather Hough, executive director of Policy Analysis for California Education at Stanford University.

Hough says that, with the right resources and support, educators can fast-track learning. “And this doesn't have to have a long term catastrophic event on their lives,” Hough said of the pandemic.

Hough’s research released in January showed that California students in 18 school districts grew less in mathematics and English language arts than they would have over a typical year. The evidence was most pronounced in the younger grade levels.

But the most concerning impacts, according to Hough, were that kids in socioeconomically disadvantaged groups, which in the study included low-income students and English language-learning kids, were further behind than their peers.

“In the fifth grade, our research shows that students learning English are about 30 percent behind where they would be in a normal year in English language arts, compared to 10 percent for students that are not learning English,” Hough said.

And this is a significant group: English-learning students make up almost a fifth of California’s public school population, according to  California Department of Education estimates from 2019.

Although some may already be fluent in English, more than 40% of the students enrolled in California public schools overall — some 2.5 million kids — speak a language other than English at home. More than 81% of English-learning students in California schools speak Spanish, according to the state statistics.

Larry Ferlazzo teaches history and English to non-native-speaking students of all levels at Luther Burbank. 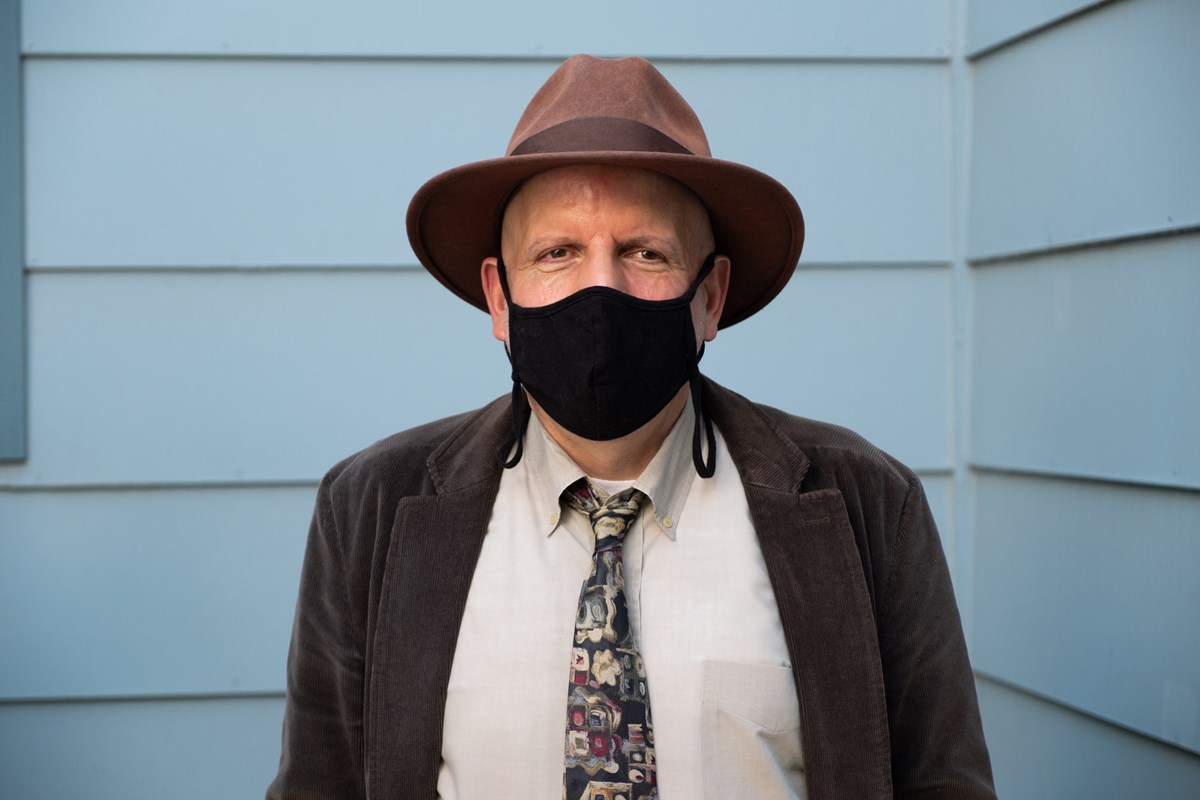 Teacher Larry Ferlazzo, at his Davis home, wears a mask model the behavior for his students.Andrew Nixon / CapRadio

He tries to make the best of “Zoom school” by teaching with humor and interactive online quizzes. But the quality is not the same as learning face-to-face, he said, where gestures and informal interaction can help student comprehension.

“There’s no question that grades are suffering, not just for [English-learners], but for all students,” Ferlazzo said about how students are doing nationwide. He writes extensively about education trends and improving school instruction for national outlets such as EdWeek.

During a couple of his online classes one recent Wednesday morning, almost all students had their cameras off, with just cartoon characters or animal photos to represent their space on the screen. Students responded to Ferlazzo or teacher aide questions by writing in the chat, instead of verbalizing their answer.

But the technical glitches and physical distance are not the only thing preventing non-native English speakers from learning more. Ferlazzo says many of his students are children of immigrants from all over the world — Afghanistan, Central America, Vietnam, and the Pacific Islands — and family responsibilities sometimes keep them from attending class.

And Ferlazzo says he hears of a case of COVID among one of his students, or their family members, at least once a week.

“When you’re sick, when you’re worried, you just can’t concentrate,” he said.

Hough says the learning gap between disadvantaged groups and other students during the pandemic is directly tied to the different supports kids have at home.

“In some families, students have full time tutors, or even a credentialed teacher, who's at home supporting their learning.  Or a parent who doesn't work, who's supporting their learning full time,” she said. “On the other end of the continuum, we have families where perhaps there isn't an adult at home during the day at all because all adults in the family are out working multiple jobs.”

The California Legislature and Gov. Gavin Newsom are still deadlocked about how to reopen schools, and what resources will be available when they do.

Samantha Tran of Children Now says policymakers should focus resources on the most disadvantaged kids, such as English language learners, and that should include summer school and partnerships with community-based organizations.

“How do we address some of this learning loss in a way that engages kids, that gets them excited about learning, and dare I say … be fun?” Tran asked.

Carrillo will likely be able to feel more connected to her peers and teachers in a couple of months. The Sacramento City Unified School District plans to restart in-person instruction for the youngest grade levels in early April. High schoolers would see each other again in May, but only if the COVID threat level goes down in the county.