When Amanda Gorman, a 22-year-old poet from Los Angeles, took to the stage on Wednesday, it was immediately clear why the new president had chosen her as his inaugural poet.

Gorman echoed, in dynamic and propulsive verse, the same themes that Biden has returned to again and again, and which he wove throughout his inaugural address: Unity, healing, grief and hope, the painful history of American experience and the redemptive power of American ideals.

Where Biden said, "We must end this uncivil war," Gorman declared, "We lay down our arms so we can reach out our arms to one another."

And where Biden called for an American story of "love and healing" and "greatness and goodness," Gorman saw strength in pain: "Even as we grieved, we grew," she said. 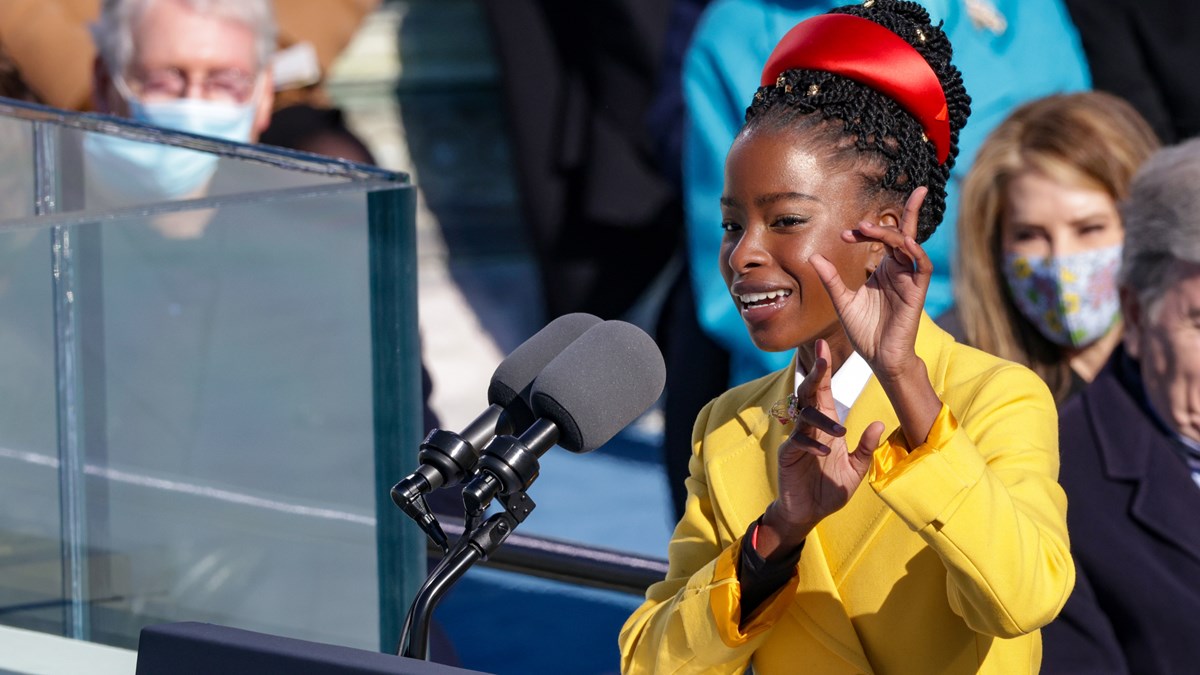 Poet Amanda Gorman speaks at the inauguration of U.S. President Joe Biden on the West Front of the U.S. Capitol on January 20.

Gorman opened by acknowledging the reasons why hope can be challenging. "Where can we find light in this never-ending shade?" she asked.

But she continued: "And yet, the dawn is ours before we knew it. Somehow we do it. Somehow we weathered and witnessed a nation that isn't broken but simply unfinished."

She acknowledged the power of her own presence on the stage, in "a country and a time where a skinny black girl descended from slaves and raised by a single mother can dream of becoming president, only to find herself reciting for one."

Like Obama inaugural poet Richard Blanco, who invoked the grand sweep of American geography in a call for unity in "One Today," Gorman dedicated a portion to "every corner called our country," from the South to the Midwest. She ended with an invitation to "step out of the shade."

Gorman was following in the footsteps of poets like Blanco, Robert Frost and Maya Angelou as she composed the poem "The Hill We Climb" for the inauguration.

But she also took her cues from orators like Frederick Douglass, Abraham Lincoln and Martin Luther King, Jr. — people who knew a thing or two about calling for hope and unity in times of despair and division.

Gorman told NPR she dug into the works of those speakers (and Winston Churchill, too) to study up on ways "rhetoric has been used for good." Over the past few weeks she composed a poem that acknowledges the previous president's incitement of violence, but turns toward hope.

"The Hill We Climb" reads, in part:

We've seen a force that would shatter our nation rather than share it,

Would destroy our country if it meant delaying democracy.

And this effort very nearly succeeded.

But while democracy can be periodically delayed,

It can never be permanently defeated.

In this truth, in this faith, we trust.

For while we have our eyes on the future,

history has its eyes on us.

Gorman, like Biden, had a speech impediment as a child. (Biden had a stutter; Gorman had difficulty pronouncing certain sounds.) She told NPR's Steve Inskeep that her speech impediment was one reason she was drawn to poetry at a young age.

"Having an arena in which I could express my thoughts freely was just so liberating that I fell head over heels, you know, when I was barely a toddler," she said.

For Gorman, a former National Youth Poet Laureate, her struggle to speak provided a connection not only to the incoming president, but to previous inaugural poets, too.

"Maya Angelou was mute growing up as a child and she grew up to deliver the inaugural poem for President Bill Clinton," she says. "So I think there is a real history of orators who have had to struggle with a type of imposed voicelessness, you know, having that stage in the inauguration."

There have only been a handful of inaugural poets; Barack Obama, Bill Clinton and John F. Kennedy were the only presidents in the past who chose to have poems read at their inaugurations. You can read all the previous poems here.