A small number of supporters of former President Donald Trump gathered peacefully outside the Nevada Capitol in Carson City Wednesday, as incoming President Joe Biden was sworn into office in Washington, DC. Authorities have been on high alert after a series of armed protests at state capitals was announced online following the pro-Trump insurrection at the U.S. Capitol Jan. 6.

But the much feared violence never materialized in Nevada, and for most of the morning, the crowd of roughly 20 protestors listened to musical hits by Creedence Clearwater Revival over loudspeakers.

Protests by Trump supporters have been happening on a weekly basis since March, spurred by COVID-19-related state lockdown orders. They often feature a series of speeches. On Inauguration Day, protestor Dan Holden set up the microphone and speakers to amplify their grievances.

“The goal is to make sure that true conservatives are elected and replace these people who stabbed the president in the back on the way out,” he said of the protest.

Holden didn’t say which elected representatives he’d like to see voted out, except for  Congressman Mark Amodei (R-Carson City). He said that was because Amodei voted to certify Biden’s electoral college victory.

According to Holden, he and like-minded voters have started to identify more “true conservatives” to run for office in Nevada. They believe some Republicans have betrayed them by publicly accepting Biden’s presidential win. However, courts around the country, including the U.S. Supreme Court, have dismissed numerous lawsuits alleging electoral fraud in the presidential election.

“Conservatives, yeah they’re pissed,” he said. “Especially after all this election squabble going on and seeing what happened.”

One of those conservatives is a man named JT, a Carson City resident who declined to give his last name. He protested in front of the state legislative building with an unloaded AR-15, a holstered sidearm and a Gadsden flag, which contains an image of a coiled rattlesnake and the inscription “Don’t Tread On Me.”

“That is part of our Second Amendment right,” he said of his rifle. “I don’t usually carry it around, but today it needs to be seen that we have the right to bear arms and defend ourselves.”

JT said he started attending protests on Jan. 6. He plans to keep showing up every weekend, even if he’s the only person there to support the former president.

Another attendee named Eric, who also declined to give his last name, told CapRadio he, too, feels disappointed that more Republicans didn’t do more to block Biden’s inauguration.

“I left the Republican party, I became an independent,” he said. “There are obviously some Republicans that... we call them RINOs, okay?”
RINO, which stands for “Republican in name only,” has emerged as a favored insult among Trump and his supporters, used to attack those in the GOP who have acknowledged Biden’s victory.

Eric added that there was a protest being planned for Feb. 1, which will be the first day state lawmakers return to Carson City for the biennial legislative session. He said they are planning to “surround” the legislature, but didn’t explain what that would involve.

“I’ll be out here, unless I’m under the weather,” he said. 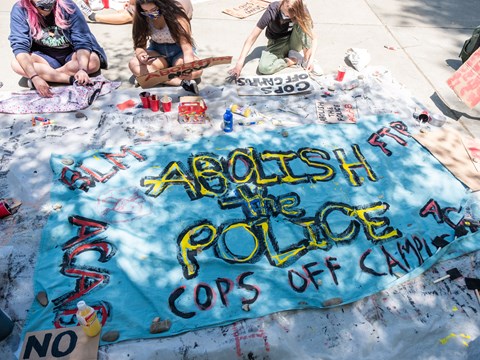