After Months Of Demonstrations At Nevada’s Capitol, Officials Prepare For Possible Armed Protests

Officials are bracing for a series of armed protests through next week after the violent takeover of the U.S. Capitol by a mob of pro-Trump extremists. But in Nevada, the planned demonstrations also follow a series of weekly protests by far-right groups.

At right-wing rallies in Carson City, pro-Trump protesters regularly use extreme rhetoric in response to President-elect Joe Biden’s victory in the November election. Many of them believe the false narrative that the vote was rigged — a baseless claim President Donald Trump has been repeating since before the election took place.

Larry Witzig, who claims membership in extremist groups including the Boogaloo Bois and Three Percenters, told CapRadio in November he was prepared to fight law enforcement and National Guard soldiers if Biden was to become president.

“For all the National Guard members out there, nationwide: if Biden gets put into office and they shove this president down our throat, we’re asking you, begging you, we’re imploring you to stand down,” he said. “When we come through, don’t square up with us.”

The Three Percenters are a loosely-organized national paramilitary network with extremist, anti-government views. They back Trump, though, because he echoes a lot of their rhetoric around gun ownership and reducing the regulatory power of the federal government.

Meanwhile, Boogaloo Bois are an accelerationist group that believes a second civil war is unavoidable, or even necessary. They’re known for wearing Hawaiian shirts and assault rifles, although they’ve been less visible since some of their members were charged with assassinating police officers and other violent crimes last year.

Many of the extremist groups that joined the insurrectionist mob on Jan. 6 have maintained a visible presence in Carson City. Based on photos and videos from the insurrection at the U.S. Capitol, the Three Percenters  were joined by Oathkeepers — another far-right paramilitary group — as well as neo-nazis and the Proud Boys, a white supremacist street-fighting gang. Followers of QAnon conspiracies were there, too.

Since the insurrection took place, flyers have circulated online calling for armed marches at all 50 state capitols — as well as a return to the U.S. Capitol. 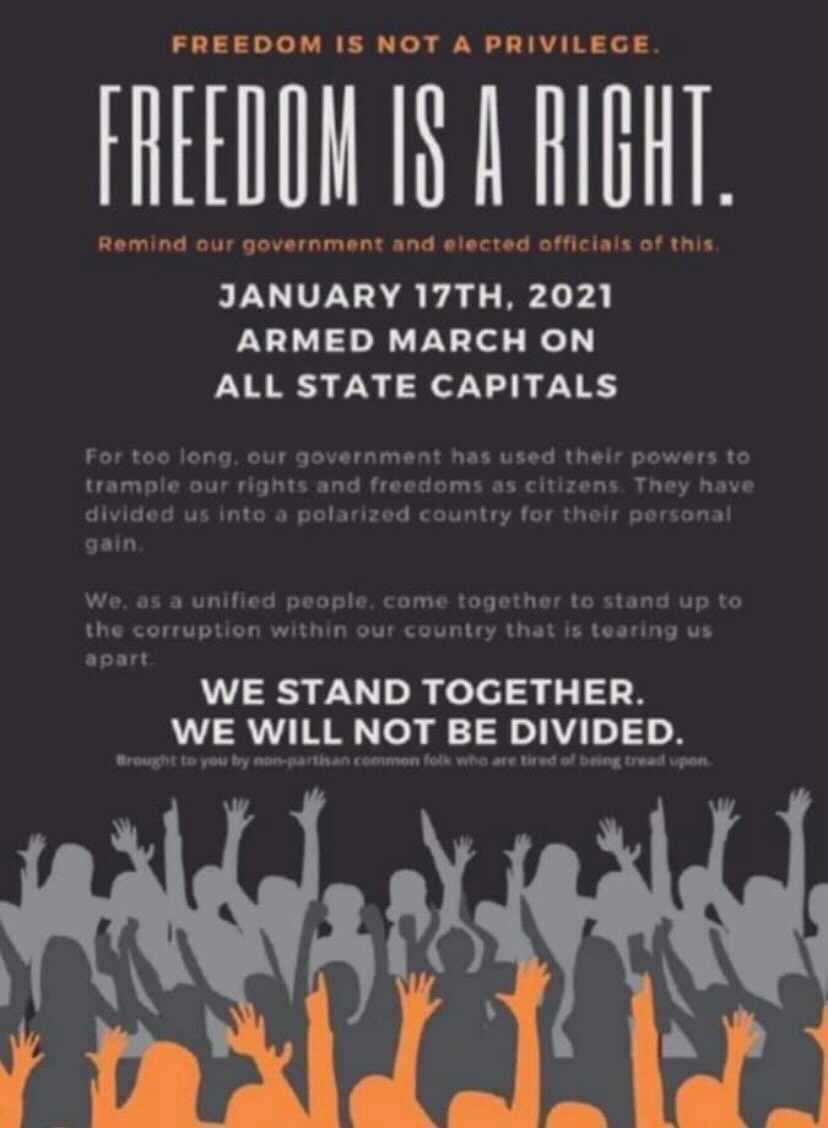 In response, Gov. Steve Sisolak ordered the Nevada National Guard to assemble a quick response unit within the state. But local law enforcement sought to play down the potential for violence.

In a phone interview, Carson City Sheriff Ken Furlong explained the series of weekly protests his department has been monitoring for the last several months has been largely peaceful. He was confident any events over the weekend and on Jan. 20, when Biden will be sworn in as the 46th U.S. president, would be the same.

“This upcoming weekend is no different than what we have done in the past,” he said. “All of the agencies work together to determine an appropriate level of security for the public safety.”

The Nevada Legislative Police, who are responsible for part of the Capitol complex where many of the recent demonstrations have been held, did not respond to a request for comment. But state lawmakers won’t be in the building until February, when the next legislative session is scheduled to begin.

Members of the far-right have been organizing protests and violent confrontations online for years. During confrontations with antifa-aligned counter-protesters far-right groups will film and take photos, which they can then use as recruitment material to gain new supporters.

But in the wake of the attack on the U.S. Capitol, it appears law enforcement officials in Washington D.C. ignored the insurrection as it was being planned in plain sight.

According to Josh Horwitz, Executive Director of the Coalition to Stop Gun Violence, the assault on the U.S. Capitol was motivated by what he calls the “insurrectionist idea.”

“It comes from the idea that within the Second Amendment there is an individual right to fight government tyranny,” he explained. “At the appropriate time, violence, especially armed violence, is an appropriate way to influence the political process and to get your point across.”

In other words, proponents of the insurrectionist idea believe that if elected leaders do something they don’t like, they have a right to intimidate them with their guns.

Horwitz also says the insurrectionist idea has its roots in white supremacy.

“Racism and insurrectionism are interchangeable,” he said. “It’s about power and white men not losing power, that’s the heart of this.”

What to know about Sacramento city schools' COVID-19 vaccine requirement