In this Nov. 19, 2020 file photo Ventilator tubes are attached a COVID-19 patient at Providence Holy Cross Medical Center in the Mission Hills section of Los Angeles.

A deceptive and widely viewed Facebook video claimed Los Angeles hospitals did not face a recent surge of COVID-19 patients. The footage made the rounds and was believed by Facebook users despite strong evidence to the contrary from health officials and media reports.

The anti-mask activist who shot the video made a sweeping conclusion: There are “absolutely no patients” at Martin Luther King, Jr. Community Hospital in Los Angeles, according to the video, posted on New Year’s Day. The activist also referred to hospital staff as “useful idiots.”

A hospital representative rejected the video’s assertions as baseless.

The footage mostly shows the hospital’s deserted outpatient center. But this is not where COVID-19 patients arrive, as pointed out by some of the comments on the video.

“There is no substance whatsoever to her allegations,” Driscoll wrote in an email, referring to the activist.

The hospital is located in a mostly Black and Latino south L.A. neighborhood where many residents are essential workers who are continually exposed to COVID-19. It also serves some unhoused individuals. The hospital is considered among the hardest hit in Southern California, where post-holiday COVID-19 cases have skyrocketed.

In a striking example, the number of cases in Los Angeles County doubled from 400,000 on Nov. 30 to 800,000 on Jan. 2, according to the county’s public health department. That led to patients overwhelming area hospitals, including an oxygen shortage at five facilities, forcing them to close to all ambulance traffic for several hours.

The Facebook video was flagged as part of the social media company’s effort to combat false news and misinformation. (Read more about PolitiFact California’s partnership with Facebook.) It had been shared 1,000 times and viewed more than 18,000 times as of early this week.

Converting ‘Every Nook And Cranny’ To Patient Space

To fact check the video’s claim, we relied on statements and data from officials at MLK Jr. Community Hospital, along with other health and emergency service officials. We also reviewed recent news reports, photos and videos showing the impact of the COVID-19 surge on hospitals in the L.A. area.

A Dec. 19 report by CBS News shows patients inside a triage area set up at MLK Jr. Community Hospital’s ambulance bay. Additionally, a KTLA TV news report this week shows a similar tent set up outside the hospital.

A Dec. 29 report by ABC 7 Los Angeles shows footage of patients on gurneys waiting in hallways at an unidentified hospital, while several news clips include footage of ambulances waiting outside emergency rooms with patients still inside.

"We have converted every conceivable nook and cranny in the hospital into patient care space," Dr. Elaine Batchlor, Martin Luther King Jr. Community Hospital CEO, told ABC News last month. "We're doing everything that we can."

The Facebook video shows the both the outpatient center and the main entrance to MLK Jr. Community Hospital. There’s little activity at either location. Driscoll, the hospital spokesperson, said that’s because these “are not patient areas” and few COVID-19 patients come in through the main doors.

She also cited a data analysis showing MLK Jr. Community Hospital had the highest rate of COVID-19 patient volume to hospital bed capacity of any nearby hospital in late December. It shows 97% of its 131 licensed beds were being used by COVID-19 patients the week before Christmas, a higher rate than each of the dozens of other hospitals within 15 miles. 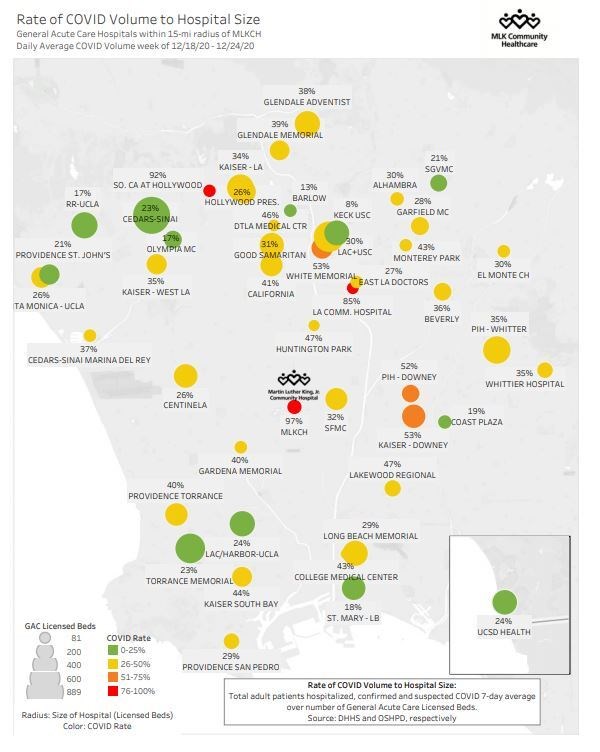 Driscoll says the hospital’s figures are based on an analysis of data from the U.S. Department of Health and Human services, which publishes COVID-19 data at hospitals nationwide.

As of late December, the hospital remained well over capacity with 225 total patients, when combining those with and without the virus, according to the Los Angeles Times.

‘Every Bed Occupied By A Ventilated COVID Patient’

Staff at MLK Jr. Community Hospital aren’t the only ones dealing with the impacts of the area’s coronavirus surge.

“When you walk into the ICU, and you see every bed occupied by a ventilated COVID patient, with tubes coming in all orifices of their body, you begin to understand that we are not dealing with what we were dealing with 10 months ago,” Spellberg said in the Times article.

There was not one available bed for at least 30 patients who needed intensive or intermediate levels of care, Spellberg added in the article, and the hospital had to shut its doors to all ambulance traffic for 12 hours. 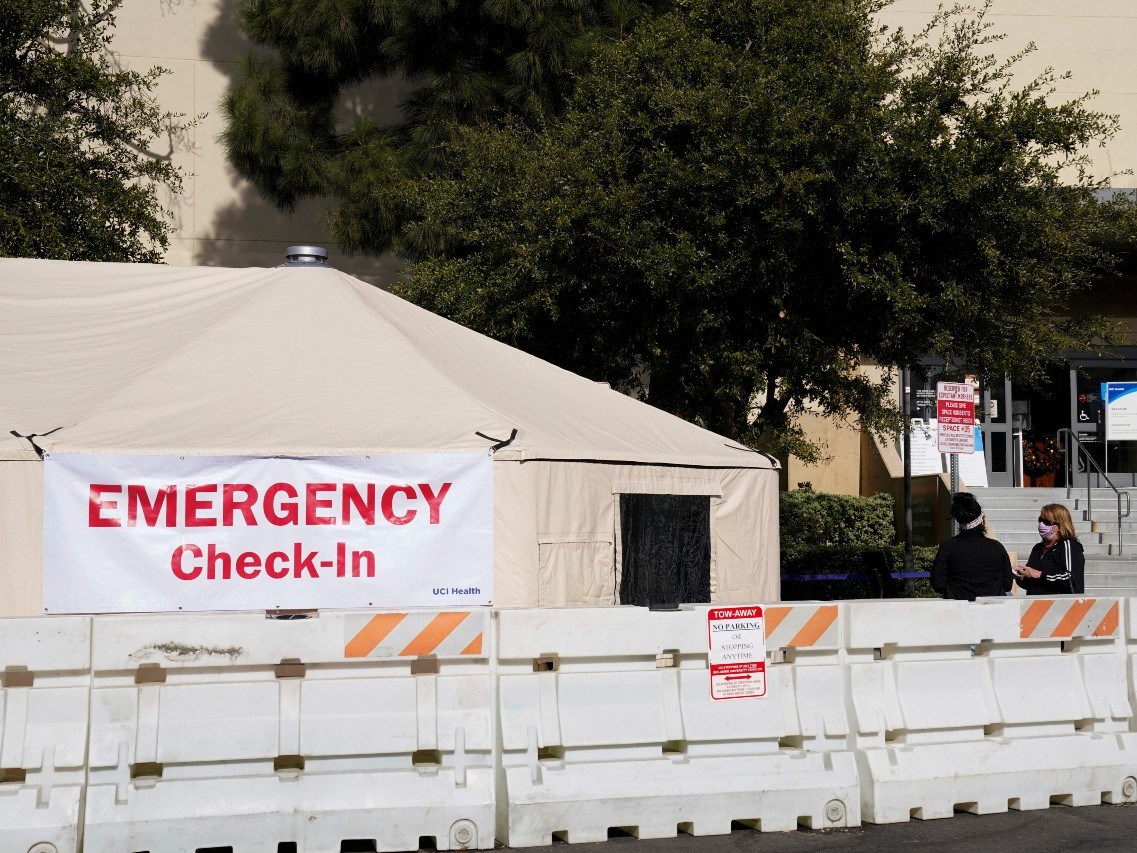 In this Dec. 17, 2020, file photo, medical tents are set up outside the emergency room at UCI Medical Center in Irvine, Calif.Ashley Landis / AP Images

Regional health officials warned the impact to hospitals is even more serious this week, as the post-Christmas and New Year’s Eve surge of cases and patients is just beginning.

“We are still encouraging people to only come to the emergency department or to call 911 if you have a medical emergency or psychiatric emergency,” Los Angeles County Public Health Services Director Christina Ghaly said at a press conference on Monday. “Ambulances are still having to wait many hours to offload patients to the emergency room.”

That claim is a far cry from reality. Video from news reports along with patient data and statements from the hospital all show MLK Jr. Community Hospital, like many in the region, was flooded with patients last month as COVID-19 cases soared.

Additionally, the Facebook video was filmed at the hospital’s outpatient center, which is not where COVID-19 patients arrive. They come in through separate emergency department and ambulance entrances.

A hospital spokesperson described the claim as groundless.

Based on the evidence, we agree and rate it Pants On Fire.

The New York Times, Southern California’s Hospitals Are Overwhelmed, and It May Get Worse, Dec. 25, 2020