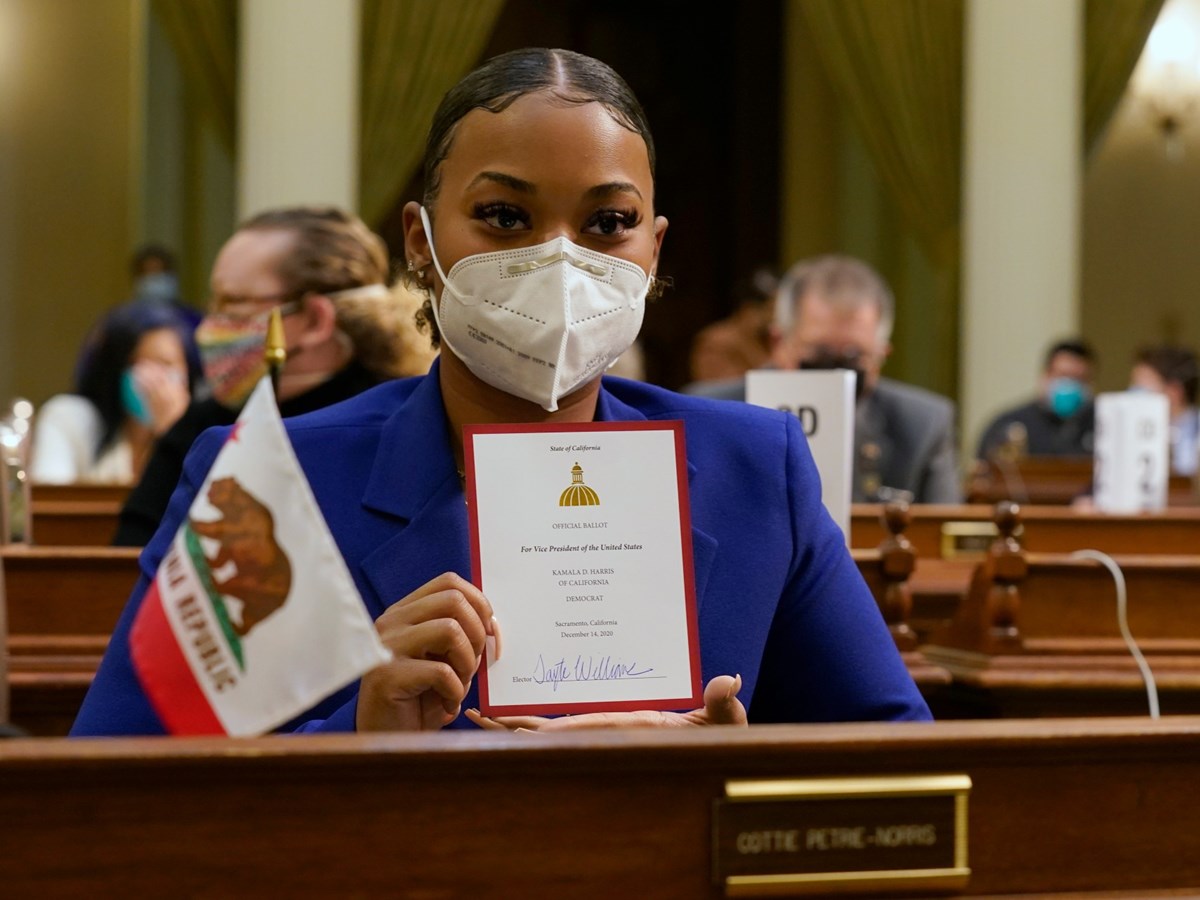 California’s 55 representatives to the electoral college met this afternoon in Sacramento and cast their ballots for President-elect Joe Biden and Vice President-elect Kamala Harris.

The state’s electors pushed Biden past the 270-vote threshold and delivered him the presidency.

The electors are chosen by California Democrats and bound by law to cast votes for the party they represent. No elector cast a vote for President Donald Trump, what's known as a "faithless elector."

The group first cast 55 ballots for Biden, then again delivered unanimous results for Harris in a second round of voting. Each candidate received a standing ovation when the votes were read.

“On behalf of all the people of California, I want to thank you,” said Assemblywoman Shirley Weber, who served as an elector and ran the meeting as chair. “We continue to validate that this democracy — this experiment in treating everyone equal and making sure that every vote counts — is truly, truly successful.”

Normally, the meeting of the electoral college is an election-year formality that receives little attention.

“The only reason the country is caring about the drama of the electoral college votes — which is normally not any kind of drama at all — is because of Trump’s continued insistence that he’s going to be able to pull a rabbit out of the hat and remain in office,” said Rick Hasen, an election law expert at UC Irvine. “There’s no legal path for him to do that.”

No states recorded votes from faithless electors. In Georgia, the people chosen by Georgia’s Republican Party to serve as electors had Trump won the state also gathered to cast unofficial votes for the president.

“Given all the focus on faithless electors since the last election, the [political] parties have been very careful to pick very loyal people to be the electors for each candidate,” Hasen said. “So, I don’t expect any Biden elector or Trump elector to go rogue in any state.”

The pandemic also complicated the meeting, which is constitutionally required to happen in-person at the state Capitol. The electors met in the Assembly chamber and cast physical ballots during the process, according to state election code.

A source with the California Democratic Party said electors were asked to quarantine ahead of the gathering. They were spread out on the Assembly floor and in the gallery.

Electors were required to wear face masks and socially distance inside the state capitol. Only limited news media were allowed inside.

The capitol grounds were barricaded and patrolled by the members of the Assembly Sergeant At-Arms, who provide Capitol security. No protestors gathered outside during the meeting, though the state Capitol and surrounding area has been the site of regular and violent weekend protests. Pro-Trump demonstrators have gathered for six-straight weekends to falsely claim the election was “stolen” from him.

In California, each political party nominates its own electors. The Democratic electors are selected by each of the party’s nominees for federal office, meaning each Democratic candidate for Congress chooses one elector.

The roster also includes a litany of community and political activists, family members of California congressional representatives and former elected officials. According to state code, electors are paid $10 for their services and are reimbursed 5 cents per mile for travel costs.

Once all votes from the electoral college are recorded, Congress will meet in a joint session on Jan. 6, 2021 to certify the results. Here's a rundown of the process happening around the country.

Hasen expects some GOP House members to object during that process, but expects any objections to amount to nothing more than delay tactics.

“A big part of how annoying this will be will depend on whether a senator agrees to join with a representative in making an objection,” he said. “If no senator joins, an objection is not heard by each house.”

Correction: A previous version of this story misspelled the name of Sacramento Mayor Darrell Steinberg. It has been corrected.