In July, amid an epidemic of coronavirus cases, California’s corrections agency rolled out early-release programs touted as a solution to protect inmates at overcrowded prisons. But nearly all of the prisoners selected were scheduled to be released within months anyway, while many inmates with longer sentences remain in prison despite serious health conditions.

About 6,500 inmates in California’s prisons were eligible for release under the state’s high-risk medical release program.

But as of Nov. 25, only 62 inmates were released solely because of their medical conditions, according to data from the California Department of Corrections and Rehabilitation. The rest of the 7,596 people released had less than a year to serve on their sentences and may or may not have medical problems.

That means several thousand people with serious medical conditions remain in California’s prisons as the number of COVID-19 cases among inmates and guards surges. Even with the releases, more than 20,000 inmates — and counting — have tested positive. At least 95 have died, and some prisons remain overcrowded.

“This is frankly unacceptable,” said Sharon Dolovich, faculty director of the UCLA Prison Law & Policy Program and director of COVID Behind Bars. “I’ve been hearing the number 62 for at least a couple of months, if not longer. It’s just a trickle.

“It’s not going to make any appreciable difference when we’re talking about COVID-risks, and it just tells you that the governor and the Department of Corrections are not taking this crisis seriously,” she said.

Early releases are designed for people with less than a year on their sentences or medical conditions that put them at high risk. To be released early, people can’t be serving time for domestic violence or a violent offense or committed a crime that requires them to register as a sex offender, and the CDCR must deem them low-risk for violence.

For medical releases, inmates can’t be serving life without parole or be on death row. They must have a low-risk assessment for violence, deemed at high risk for COVID complications by Correctional Health Services and can’t be high-risk sex offenders. People with chronic medical conditions such as asthma and chronic obstructive pulmonary disease are considered in danger of severe effects of COVID-19. According to CDC guidelines, Type 2 diabetes, heart conditions and kidney disease are also pre-existing conditions that leave people vulnerable to severe effects of COVID-19.

The majority of early releases had committed property crimes; 26% represented people who had committed a crime against a person, according to CDCR data.

CDCR spokesperson Dana Simas said that while the state’s high-risk medical release “numbers look low,” there were “thousands of inmates” who were classified as medically “high-risk” that were released under another program, such as those with fewer than 180 days or 360 days left of their sentences.

A tale of two releases and one rejection

When COVID-19 began spreading around San Quentin State Prison, Vance, who is in his 50s, grew concerned. (He requested not to be identified by his full name because he worries about retaliation by corrections officials.)

After more than three decades behind bars, he was aging. There was the heart attack, the lung disease, the positive COVID-19 test — all conditions he thought would make him the ideal candidate for release. He was wrong.

The murder that landed Vance behind bars happened in the early ’80s, when he was in his early twenties. It started with a brawl and ended with Vance firing into a crowd, killing a bystander. He was sentenced to 20-years-to-life in prison for second-degree murder, an indeterminate sentence, meaning he had no definite release date.

His first eligible parole date was two decades ago.

“Eligible parole means nothing,” he said. “It’s layers and layers of bureaucracy without any real focus on public safety.”

Less than 10 years ago, Vance was deemed “suitable for parole based on his age, nonviolent prison record, social history and juvenile record, parole plans, and adequate remorse,” according to an executive report on parole review decisions. But then-Gov. Jerry Brown overturned the parole board’s decision. 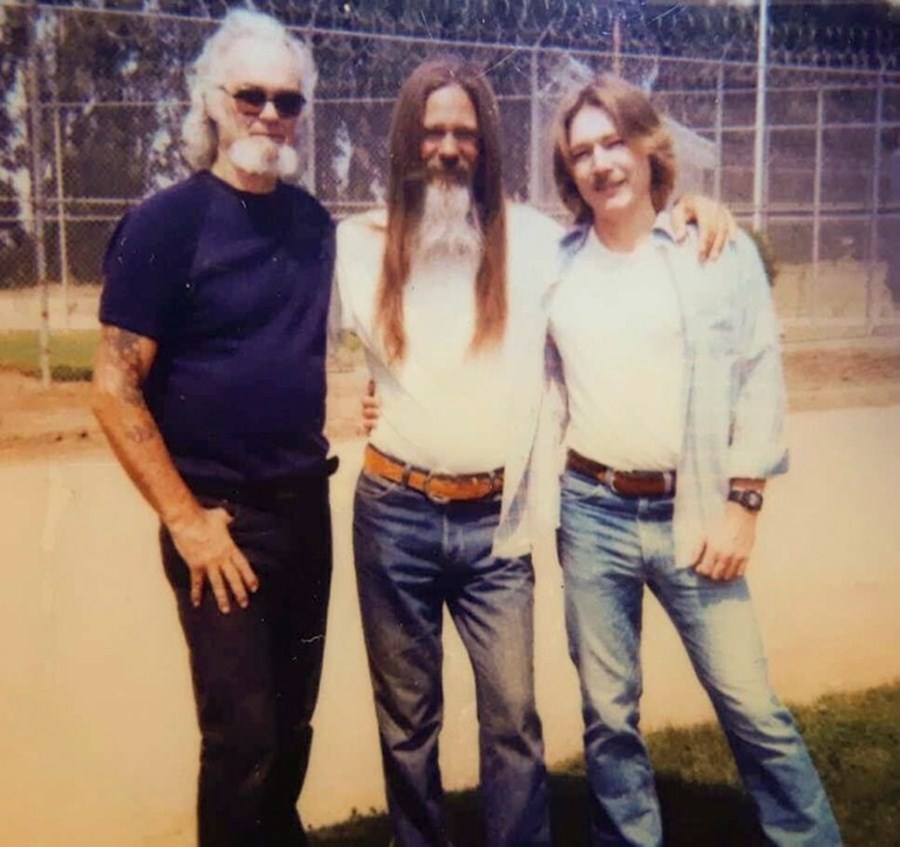 Vance, right, in a photo taken in 1986, has been eligible for parole for more than two decades and has multiple medical concerns but has not qualified for early release from San Quentin.Photo courtesy of Vance

Governors get the last say for those serving indeterminate sentences, so just like that, Vance’s hopes of being released were gone.

Then, the pandemic hit, and the corrections department began several COVID-19 early release programs in July.

Citing his own medical conditions, he applied for high-risk medical release. CDCR denied his request, writing that his violent offense and his indeterminate term of incarceration made him ineligible for early release.

Their decision made no mention of the medical conditions he included in his original application.

“There’s nothing standard,” said Vance, who was now appealing his denial. “It’s just whatever they feel like doing at the moment, which is pretty much how everything within the Department of Corrections operates.”

The state told him they’d complete their review no later than Oct. 26. But he’s still waiting.

While the majority of early releases flew under the radar, several high-profile releases have garnered a lot of attention.

Terebea Williams, 44, was one of them.

Williams was 25 when she was convicted in 2001 of kidnapping and killing her boyfriend, Kevin “John” Ruska Jr. She shot Ruska, forced him in the trunk of his car and drove — some 750 miles — from Washington state to Davis, California, according to the Davis Enterprise. Williams left Ruska in a hotel room, and by the time he was found, he was dead.

Williams was sentenced to 84-years-to-life in prison. But, after 19 years, she was released in late July. She was one of the 62 inmates who qualified for a medical release. (Her attorney did not have permission to discuss her health conditions.)

Williams had spent her time in prison earning her college degree and mentoring other inmates, all things that aided her release efforts.

In other words, years of preparation met opportunity.

“We were just able to talk to CDCR,” Olson said. “She had some health issues that were pretty significant, and the mechanism that actually released her was CDCR … authority to release under COVID regulations.”

It’s the kind of help that Olson noted isn’t available to everyone.

“It’s really a fundamental lack of resources that’s keeping so many people that are incarcerated still incarcerated,” Olson said. “And unfortunately …their cases aren’t either being acknowledged by the courts or the proper workup isn’t being done to convince the powers that be that these clients, or these incarcerated people deserve to be released at this point.”

Ruska’s family is upset that Williams is free to move on with her life without serving more of her sentence.

The family did not respond to an interview request from CalMatters. “For this to come down, for her to walk, I don’t even know why, to this day, why my son is dead,” Ruska’s father, Kevin Ruska, Sr., told CBS Sacramento.

Kitchen was sentenced to eight years. She served nearly a year in prison and the rest of her time in a reentry program. Her eligibility for parole was slated for 2021, but she was released early this year because of COVID-19. She does not have a medical condition that put her at risk.

“Initially how she only served six or seven months in prison, I don’t know, with an eight-year sentence, how that happens,” Faith’s mother, Stephanie Baldwin, said in an interview with KRCA-ABC. “We’re not able to get justice for Faith and Kiya. That’s not justice.” She did not respond to an interview request with CalMatters.

“Just another excuse to release prisoners”

Overall recidivism rates in California have declined for felony offenders, according to a study by the Public Policy Institute of California. The two-year reconviction rate for any offense dropped substantially from 41 percent to 35 percent from 2011 to 2015.

“I think our best bet right now is for Gov. Newsom to act in a more robust and aggressive way to release people from prison, especially people who are going to be released anyway in one to two years,” Olson said.

“Quite frankly, it’s not surprising that this is just another excuse to release prisoners into our community,” Nyguyen said. “We’re not better than we were at the beginning of the pandemic. It (the prison infections) is getting worse.”

While it’s too early to know if early releases last summer because of COVID-19 have increased crime, some disturbing cases have made headlines.

Nguyen cited the uproar in her district when a non-registered convicted sex offender was recently released from a state hospital after openly fantasizing about raping and killing young boys. He’d been in the hospital since 1999. His release was not related to COVID-19.

Also, in Stanislaus County, 163 prisoners were released early due to the state’s effort to reduce the spread of COVID. One who was released early after being sentenced to 32 months for felony possession of a weapon was arrested in connection with a Modesto murder.

In San Joaquin County, another inmate who was released early after being convicted of attempted robbery and burglary was arrested in his two-months-old son’s murder. He was one of 192 CDCR inmates released in San Joaquin County in the COVID-19 effort to reduce crowding.

“One child who gets killed is more than enough for me,” Nguyen said.