The Sacramento region is not prepared for a mega-flood and won’t be for nearly a decade, says Rick Johnson, executive director of the Sacramento Area Flood Control Agency.

“We’re still working on getting our base-level protection up,” he said. “But then we need to also address potential for that 100 year [storm] being a much larger event in the future.”

Johnson says there’s more than $3 billion of work currently taking place in the area to build levees, raise dams, redesign part of the American River to hold more water and deepening blockades below levees so water won’t seep underneath them. The goal is to get the region to eventually be able to withstand a 500-year storm.

“Even though we have levees in place, we're having to reconstruct all of them to bring them up to the current standards,” he said. “Natomas and the rest of Sacramento are kind of like a bathtub. Until we get it all done, you can still get flooded from a number of different directions.”

Paying attention to how climate change could increase flooding — especially wet areas of California prone to flooding like Sacramento — is important for Californians to consider because extreme flooding is another factor of how warming temperatures are altering the world, alongside fires and drought. 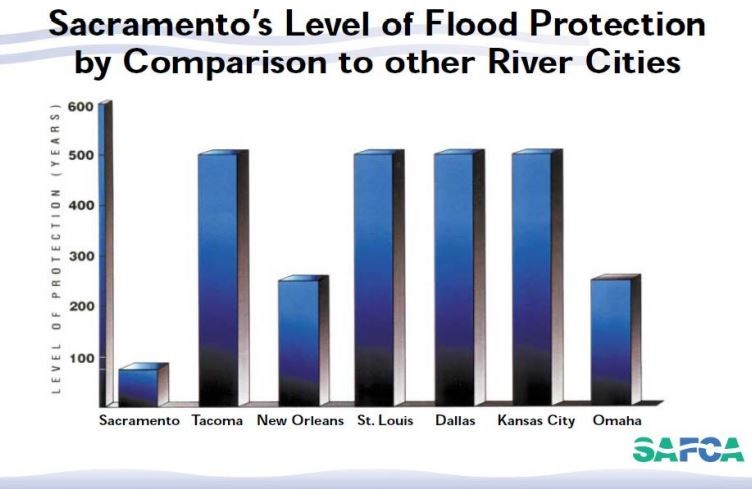 This chart from the Sacramento Area Flood Control Agency shows Sacramento's level of flood protection compared with other major cities.SAFCA

How climate change could impact flooding

Scientists expect flooding to get worse because weather extremes are growing as the climate crisis worsens globally, said Daniel Swain, a UCLA Climate Scientist and California Climate Fellow at The Nature Conservancy.

Waiting to systematically address flooding issues, like California's done with wildfire, could mean breaching of levees, Central Valley wide flooding and even flooding in areas like Los Angeles as the climate crisis worsens, said Swain.

This non‐linear increase for the most intense precipitation events has potentially major implications--as it suggests accelerating societal impacts from historically rare or unprecedented precipitation events in the 21st century. (5/13) #CAwaterhttps://t.co/XW8tlgfzpw pic.twitter.com/fYtJ2gsEdk

What is a 100-year storm? All it really means is a particularly extreme or rare event that has about a 1% chance of occurring in any given year. It doesn’t mean a storm that happens every 100 years.

“What it does not mean is that if you've just had a 100 year event that you can't then have one, right again, the following year,” Swain explained.

In his latest study he predicts extreme rainfall will make “100-year” storms likely to occur around once every 33 years and about 20% more severe. The paper was published in the American Geophysical Union journal Earth’s Future. It finds that warming has a deep effect on how intense and frequent extreme precipitation events are.

Swain says the rain events that caused California’s Great Flood in 1862 — which forced California to temporarily move the capital to San Francisco after Sacramento was inundated — or more recently Hurricane Harvey in 2017 are perfect examples of how these events are becoming more frequent. He found that in a high-warming scenario increases in rain would put 12 million people at risk of the damaging path of catastrophic flooding, about 30% more than today.

“A [mega-flood] could happen later this winter, it might not happen for 30 or 40 years,” Swain said.

He also says these mega-floods under a high-emissions scenario will likely occur in places where 50 million Americans will move to in the future. Swain also notes that the risk of flooding will increase over the next three decades even if emissions are curbed and the atmosphere only warms to 2.5 degrees. In that moderate scenario 20 million additional people are at risk.

“We don't see [mega-floods] very often and so it's easy to put them out of sight and out of mind,” he said. “But if we want to not suffer really severe consequences when they do occur, now is the time to be thinking about them.”

That’s why he says California needs to plan ahead and pay special attention to where people live today and where they could live in the future. He thinks of the reasons wildfires have become so catastrophic to human life when thinking of how future floods could be just as or more devastating.

“Fires are becoming more severe and larger, but people are also increasingly moving into high risk zones,” he said. “So, there's this combination of factors that has really accelerated that increase in the exposure to wildfire, much as we find in this study with flood risk.”

Learning from mistakes with wildfires

When it comes to preparing for storms that produce mega-floods, Swain says, the state is where it was nearly two decades ago with wildfire prevention. The state knew it was a threat, but didn’t take extreme action. He doesn’t want to see the same rapid escalation that has taken place with wildfires happen with flooding.

“There were warnings that climate change and a bunch of other factors … would eventually lead to an escalating wildfire crisis in California,” he said. “Unfortunately, I think we've reached that point. Now, in 2020, we're essentially saying something similar about the risk of floods.”

Because California hasn’t seen catastrophic flooding in recent history he says the state potentially has some lead time in preventing the damage from wildfires and flooding from becoming synonymous.

“With respect to the mega-flood that would be equivalent to the mega-fires that we've been seeing … there still is the opportunity to prepare for it,” he said.

The paper also notes there are unknowns or missing variables to why flood risk is escalating so fast. James Done, coauthor of the study and climate scientist with the National Center for Atmospheric Research, says more work is needed to fully understand the uptick.

“It’s not just because of a shift in the distribution of the flooding,” Done said. “There’s something else that’s reshaping the most extreme of the very dangerous rainfall events.”

Clarification: This story was updated to note Daniel Swain is also a California Climate Fellow at The Nature Conservancy.