The US Left The Paris Climate Agreement This Week. Where Does That Leave California? 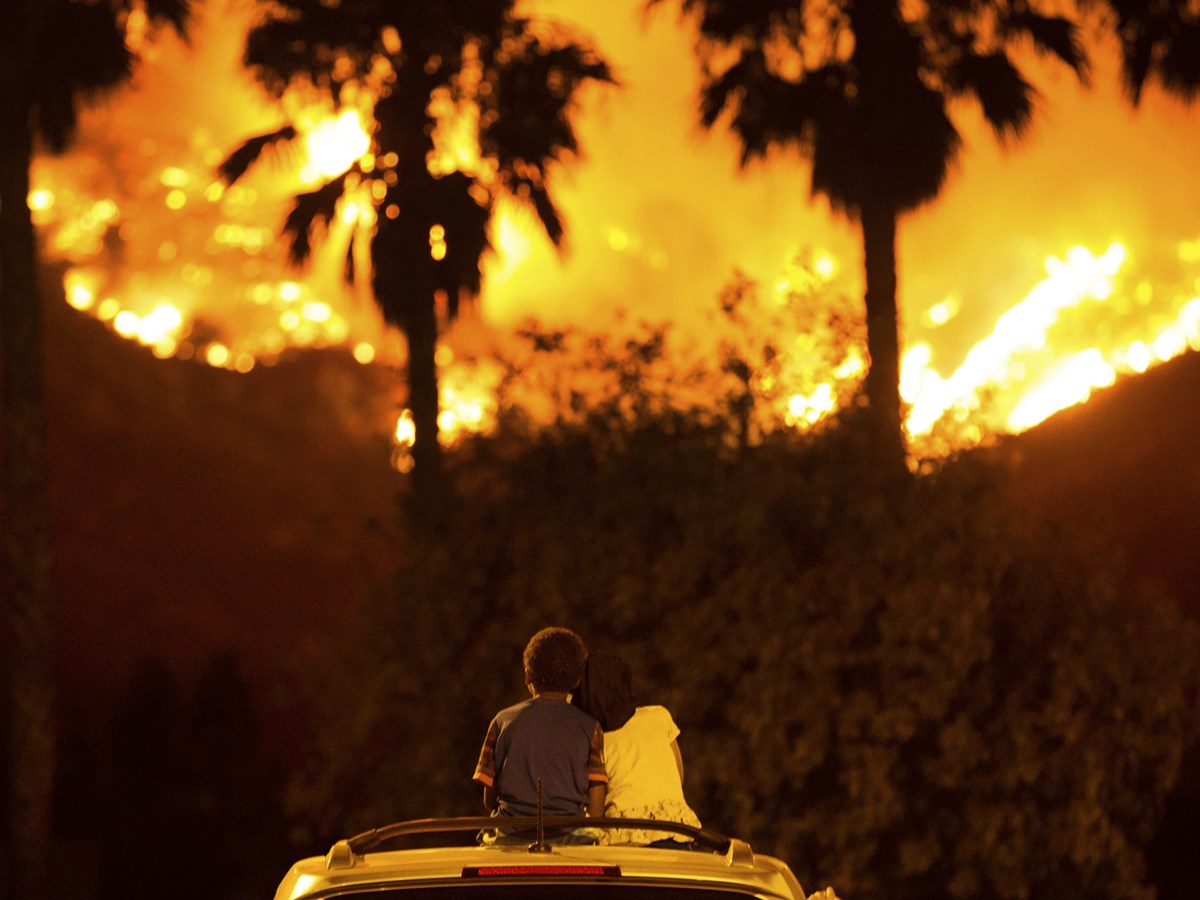 King Bass, 6, left, sits and watches the Holy Fire burn from on top of his parents' car as his sister Princess, 5, rests her head on his shoulder Thursday night, Aug. 9, 2018 in Lake Elsinore, Calif.

Nearly 70% of Americans said before the election that climate change is important for them to consider when picking a president, according to a Pew Research Center survey from August.

But even with that many registered voters believing in the climate crisis, the United States decision to leave the Paris Climate Agreement officially took effect Wednesday. That decision has potential huge ramifications for states like California with ambitious climate change goals, says Cara Horowitz, co-director of the Emmett Institute on Climate Change and the Environment at the UCLA School of Law.

“It's really a slap in the face to [the world] to have the United States walk away from what they see as its commitment to clean up the mess that it has made,” she said.

The goal of the international accord is to limit global warming to 2 degrees of warming to prevent the negative effects of climate change globally. President Donald Trump announced his desire to withdraw in 2017 and told the United Nations in 2019 that the U.S. was out. It takes one year to formally leave and that time period ended this week.

“It just gets more complicated when the president of the United States decides that climate change doesn't exist,” he said. “It’s such the wrong signal. But that's the signal this president wants to give. And I think the response has to be from California, Washington and Oregon is that's not the world we want to live in.”

The withdrawal is a big deal because the effects of global warming since the pre-industrial revolution have equaled about 1 degree of warming. That single degree has helped allow wildfires, droughts, flooding and sea level rise to worsen around the globe, said Noah Diffenbaugh, a climate scientist at Stanford University.

Diffenbaugh says the nation leaving the agreement is an issue because the country has emitted more carbon dioxide than any other country since the mid-1800s. Emissions in the country have slowly declined over the last two decades, but Diffenbaugh says not enough to prevent further harm from climate change and also notes warming is a global issue. Most recently he points to the Trump administration rolling back dozens of environmental regulations that would limit carbon emissions from everything from cars and trucks to oil companies.

The news the U.S. is pulling out is both a little and big deal, says Frances Moore, assistant professor of environmental science and policy at UC Davis. It’s a little deal because the nation knew the decision was coming. But it’s a “big deal, because it leaves us really isolated in the international community as one [nation] really committed to not doing anything about climate change.”

But Moore says the nation could always rejoin the agreement. That’s something that Democratic presidential nominee Joe Biden said he would do immediately if elected.

What Does This Mean For California?

California has been a global leader in setting ambitious climate targets, achieving some of them and also being a testbed for figuring out how climate policy and actions can work, said Stanford's Diffenbaugh.

“California is certainly affected by the US’s posture, and its technical participation,” he said. “But California was a leader before the Paris Agreement, and I expect California to be a leader after today.”

He says California’s goals of becoming carbon neutral by 2045, having 5 million zero-emission vehicles on roadways by 2030 and experimenting with cap-and-trade are reasons the state will remain a leader internationally despite the federal decision.

But even with all of the state’s climate goals, Diffenbaugh says California isn’t prepared for what’s to come if the globe keeps on warming.

He’s referring to droughts in recent years and the historical fire season California is still undergoing.

Although without federal support — that’s if the U.S. gets four more years of the Trump administration — it will be harder for California to meet its emissions goals, says Horowitz at UCLA.

“It's certainly true that California has fewer tools available to it, when it has to fight tooth and nail with our own U.S. federal government over policy tools like emissions standards for cars, which is what California has had to do under the Trump administration,” she said.

California, despite not always having federal support, has met some of its goals, she says. For example, the state laid out a goal in 2006 of reducing emissions back to 1990 levels by 2020 and it did that.

“That was one demonstration of sort of what's possible,” she said. “But California’s next set of climate goals is much tougher to meet.”

The state has ambitions to double that goal by 2030 and then reduce it even further to 80% by midcentury. Horowitz says leaders aren’t entirely sure how the state will meet that more ambitious goal, but says California is really good at coming up with creative and cooperative workarounds to meet its goals. If the state does meet them, she says it will prove “tremendously meaningful” on the international stage.

Can California Join The Paris Agreement On Its Own?

The answer is no, the agreement is reserved for nations. But Horowitz says California is part of other agreements that help fill that void, like the bipartisan coalition of states known as the United States Climate Alliance or the Under2 Coalition.

“That's the kind of agreement or workaround or cooperative effort that will become more important, if in fact, this withdrawal from the Paris Agreement endures.” she said. “That's not to say that the withdrawal is meaningless. [It] makes California's role as a climate leader, both more important and more difficult to fulfill.”

She says one thing that’s interesting about this moment in history is that the decision to pull out of the agreement comes from the head of the Republican party, while in the past California has had both Republican and Democrat governors support reducing the impacts of climate change.

Still she says there is irreversible damage done to the U.S. by pulling out of the agreement.

“Even if we're in a Biden presidency, and even if we're back in the Paris agreement in January, the world has been shown that the U.S. leadership on this issue at the national level, really cannot be relied upon,” she said.

That’s why she says it’s imperative that California shine as a climate leader, even as the nation as a whole flounders on the issue.

“California has never waited on or depended on federal action or international action on climate change,” she said. “It's been out in front on this issue for a long time. I think that role really has never been more important than it is today.”