For weeks, Rachel Lyman had Oct. 5 circled on her calendar. That was the day California counties would send out millions of mail-in ballots, giving voters a chance to make their voices heard in the 2020 election while also staying safe during the pandemic.

But because the Carmichael resident doesn’t trust the U.S. Postal Service to deliver her ballot on time, Lyman, 75, decided to take matters into her own hands. After discovering she could request a printed ballot at the Sacramento County Elections Office on 65th Street, she drove there and took her ballot “to go.”

“As a registered voter, I want my vote to be counted,” said Lyman, a Democrat and retired Sacramento State employee. “So I’m going to make sure it is. I just feel it’s so important to do this that I am putting myself in jeopardy a little bit.”

But election officials around the state said they’re confident that ballots will arrive quickly, and that they’re working closely with the Postal Service to make sure that happens.

They do not recommend people pick up their ballots in person, given concerns over COVID-19. The focus on mail-in ballots is meant “to keep everyone safe,” San Diego County Registrar of Voters Michael Vu noted.

Janna Haynes, a spokesperson for the Sacramento County elections office, said the only reason someone would request a mail-in ballot in person “is because they literally think that that ballot is not going to make it to them. We do not have reason to believe that is true.”

But, she added, “We understand that people have fear and that is why we have options.”

Those options include requesting a printed ballot and casting it at the main election office in South Sacramento. Or voters can take their ballot ‘to go’ as Lyman did and drop it later in the mail, a dropbox or return it at an in-person voting center or polling place.

Officials say anyone who does this is still going to have a ballot arrive in their mailbox, because those ballots are on the way. They urge people to destroy that second ballot.

Sacramento County Registrar of Voters Courtney Bailey-Kanelos said Lyman wasn’t the only voter to ask for a ballot on Monday. About 15 people lined up outside the office before it opened, and some made the same request, she said.

Lyman’s desire to circumvent the Postal Service shows just how far the agency has fallen out of favor and the lengths to which some voters will go to ensure they get their ballot. This summer, new Postmaster General Louis DeJoy, appointed in May by President Donald Trump’s administration, ordered cost-cutting changes that resulted in mail delivery delays across the country.

This, in turn, led to widespread concerns that the Postal Service would not be able to handle a surge in mail-in ballots this fall, and that voters should return their mail-in ballots as early as possible to make sure they are counted.

Lyman is not alone in her concerns.

A UC Berkeley poll published in late September found 41% of Californians do not trust the U.S. Postal Service to deliver the nation’s mail-in ballots safely and on time. The same poll found 42% expressed doubt in the overall integrity of the presidential election, saying it’s unlikely to be “fair and open.” 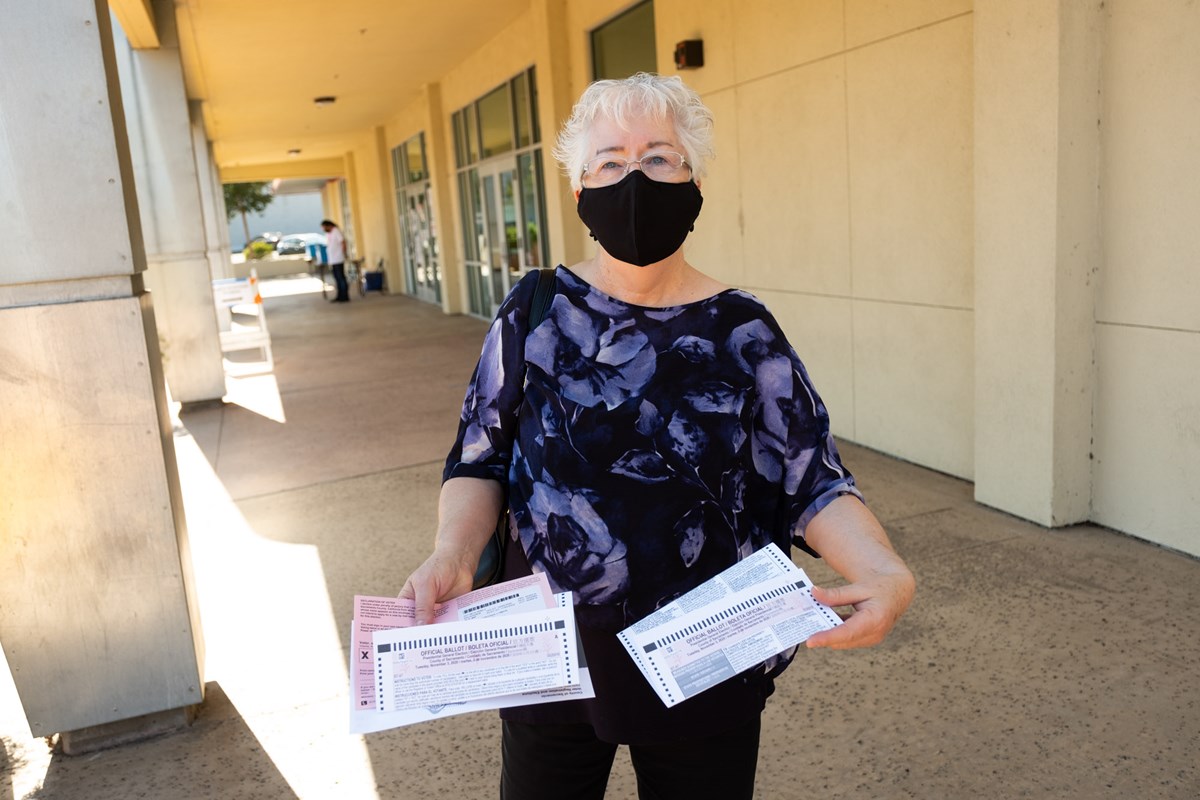 On Monday, Lyman described the process of picking up her ballot in person as “short and sweet.”

“That was wonderful. Very professional,” Lyman said, noting she and everyone at the election office wore a mask and kept a safe distance.

She offered this advice for anyone thinking of picking up their ballot in person:

“Just be safe if you decide to do this,” she said. “Keep your distance. They have the safety protocols in place. Wear your mask. It’s a five minute process. So, you’re not going to be here long. I almost wore gloves. I will definitely wash my hands when I leave here.”

Lyman said she’ll bring her ballot home, fill it out and then take it to a ballot drop box in her neighborhood — so that she can bypass the Postal Service, once again.