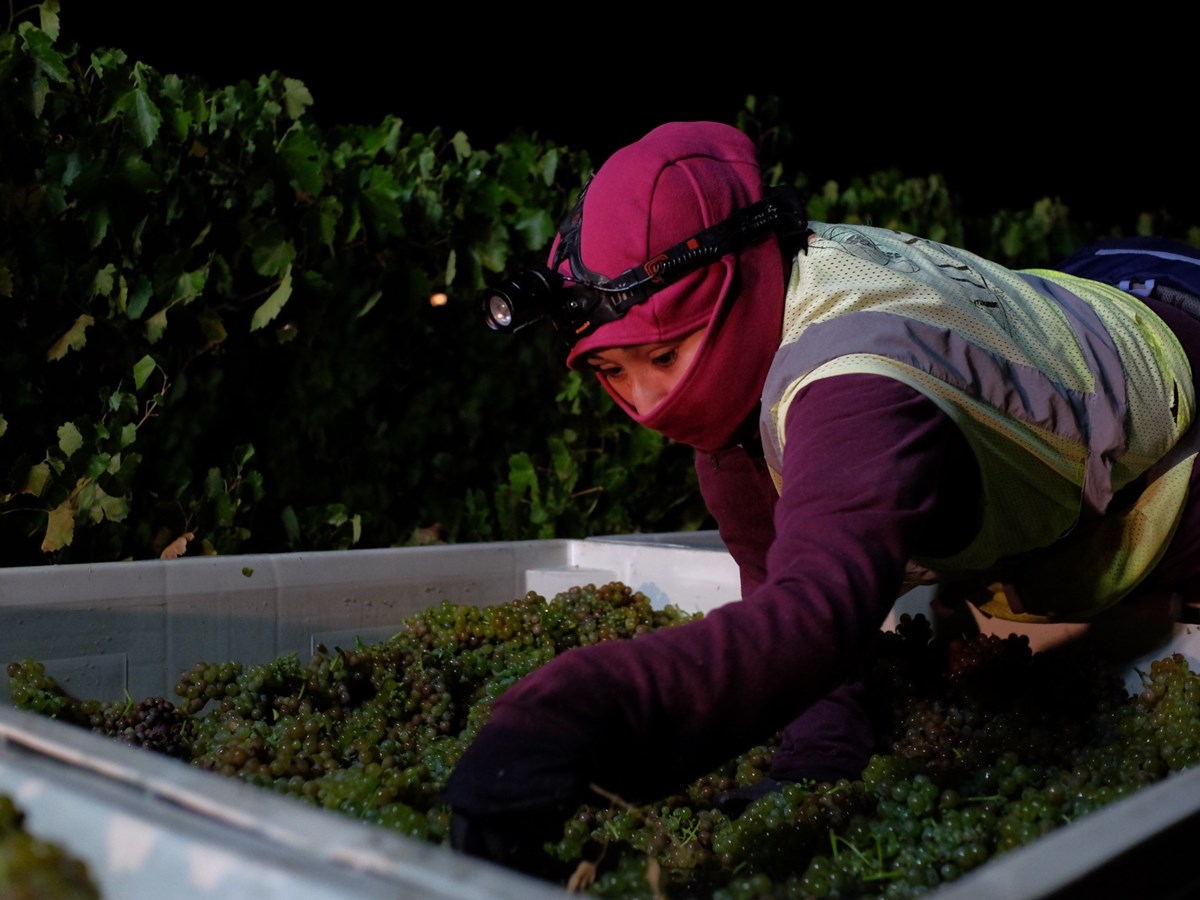 A farmworker sorts through grapes at a Santa Rosa vineyard operated by Atlas Vineyard Management.

In the back room of Carol Shelton Wines in Santa Rosa, there’s an experiment happening.

Below oak barrels stacked to the ceiling are plastic buckets filled with crushed grapes from this year’s harvest. Carol Shelton is looking for any hint of smoke — and not the subtle kind you might find in a glass of cab franc.

“It’s an acrid kind of a taste,” said Shelton, who has been making wine for over 40 years. “And it kind of burns your throat.”

Regularly screening for smoke taint the new normal for winemakers in Napa and Sonoma counties, as climate change has gradually turned Northern California wine country into wildfire country. The raging Glass Fire is the most recent testament, torching homes and vineyards in some areas that haven’t seen a wildfire since California started tracking them.

The region has suffered destructive fires in recent years, but usually later in the fall when most grapes were off the vine. This year, fires broke out in August and September, at the peak of harvest season. Vineyards that avoided the flames are struggling with pervasive smoke that threatens to contaminate grapes, as well as hotter temperatures in general that result in lighter crop yields.

The compounding problems are causing disarray. Contracts are being renegotiated on the fly, as winemakers want to ensure they’re buying uncontaminated crops. Meanwhile, growers are struggling to get grapes tested for smoke taint, as overwhelmed labs take a month or more to process samples.

In the short term, the impacts of climate change mean a messy, uncertain 2020 vintage — from seed to shelf. In the long-term, climate change could alter wine varieties produced in the region, and even reshape its borders.

“Vineyards are going to be dealing with these changes for decades to come,” said Lee Hannah, a senior scientist at Conservation International. “Some of the changes may be very, very difficult to cope with if we don't get something done about climate change.” 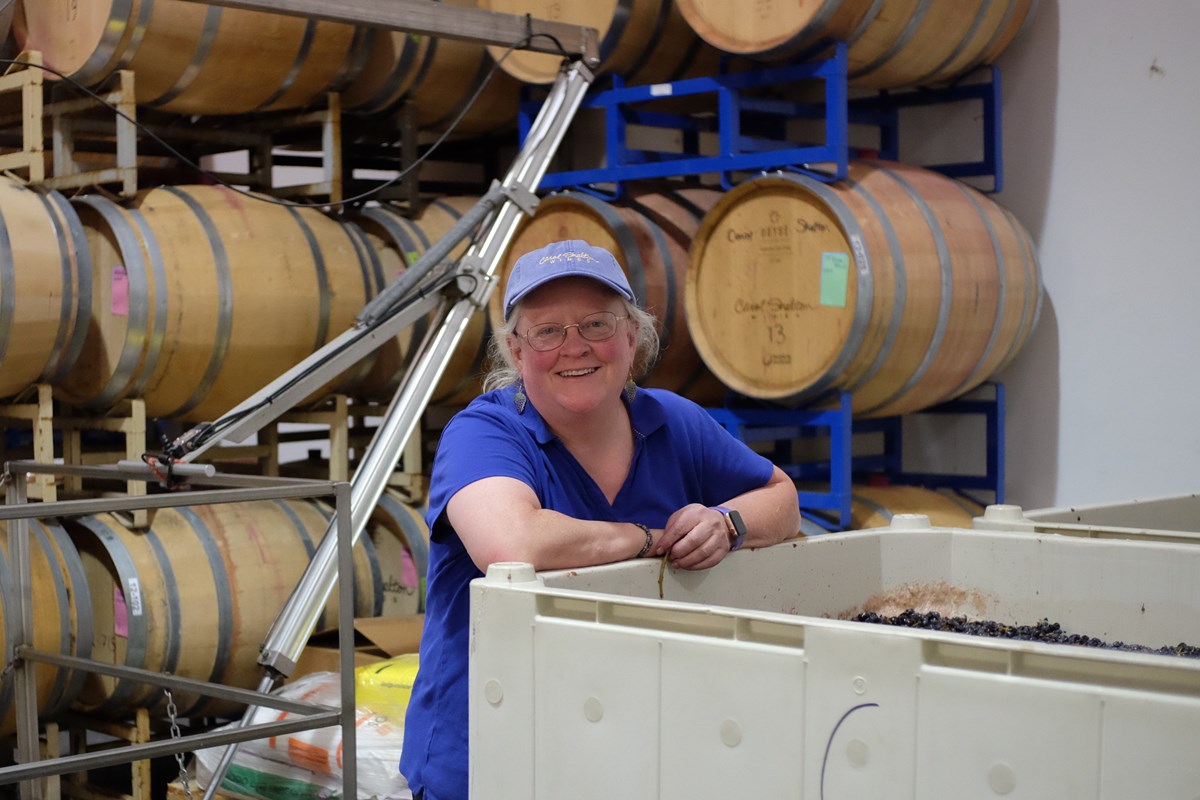 Carol Shelton has been making wine for 40 years.Scott Rodd / CapRadio

Shelton is no stranger to wildfires. The 2017 Tubbs Fire destroyed her old neighborhood, including her home.

“There were 180-ish homes there and 178 burned to the ground,” she said. “Everything that we owned was lost.”

Three years later, the smoke and fire have returned to haunt the winery she runs with her husband Mitch.

“There’s one, two, three, four, five — six wines for sure I cannot do,” she said, counting them on her fingers. “And the jury’s still out on one or two.”

One of her most highly-regarded wines — Rocky Reserve Zinfandel — won’t have a 2020 vintage. After crushing and fermenting a grape sample, it gave off a distinct campfire smell.

Shelton relies on her own olfactory judgment for a few reasons. She can invite growers to smell the smoke taint for themselves, and discuss next steps. She says that’s important to maintain close relationships with vineyards.

It can also save growers the cost and hassle of sending samples to overwhelmed laboratories.

“You have waiting times of 30 days,” she said. “And people are supposed to make picking decisions [within a] week.”

Some winemakers are refusing to purchase grapes that aren’t tested. Meanwhile, some insurers won’t pay claims for ruined crops without those results.

“Growers face the prospect of significant crop losses and economic injury,” said John Aguirre, president of the California Association of Winegrape Growers, in a September release.

For winemakers that grow their own grapes, it’s more of a calculated gamble. They can send them to a lab, or wait for results on the other end of the fermentation process.

Gordon Burns, president and technical director of ETS Laboratories in St. Helena, wrote in an email that “fire impacts will certainly not be to the entire [2020] vintage” and that “it is far too early for anyone to speculate as to the extent of impact.”

Their lab equipment has been running 24 hours a day, seven days a week at ETS, he wrote in his email sent before the Glass Fire broke out. But the recent blaze has stymied processing at their main lab. The company is currently unable to provide turnaround estimates for testing grapes, since the lab is closed following evacuation warnings in St. Helena.

Testing for smoke contamination has improved in recent years, but Oberholster says the science is still developing. Even if levels appear to be low, for example, it’s possible for the harsh taste to re-emerge after a wine has been bottled.

“These things take time” to study, she said. “The more we research this, the more we know what we don’t know.”

They’re picking at night so the grapes stay cool when they come off the vine, which slows the fermentation process.

“It’s the most exciting time of the year,” said Tony Bugica, who oversees farming and business development at Atlas Vineyard Management. “Gives me goose pimples.”

But that excitement has been mixed with some unease about growing conditions this year. Atlas manages over 120 vineyards in California, and many have endured record-setting heat in Sonoma and Napa counties this season. That’s resulted in a smaller-than-expected grape harvest this year.

“The heat, it just sucks the water right out of them,” said Chris Bowland, director of farming at Atlas Vineyard Management. “We’re seeing yield losses of 15, 20%.” 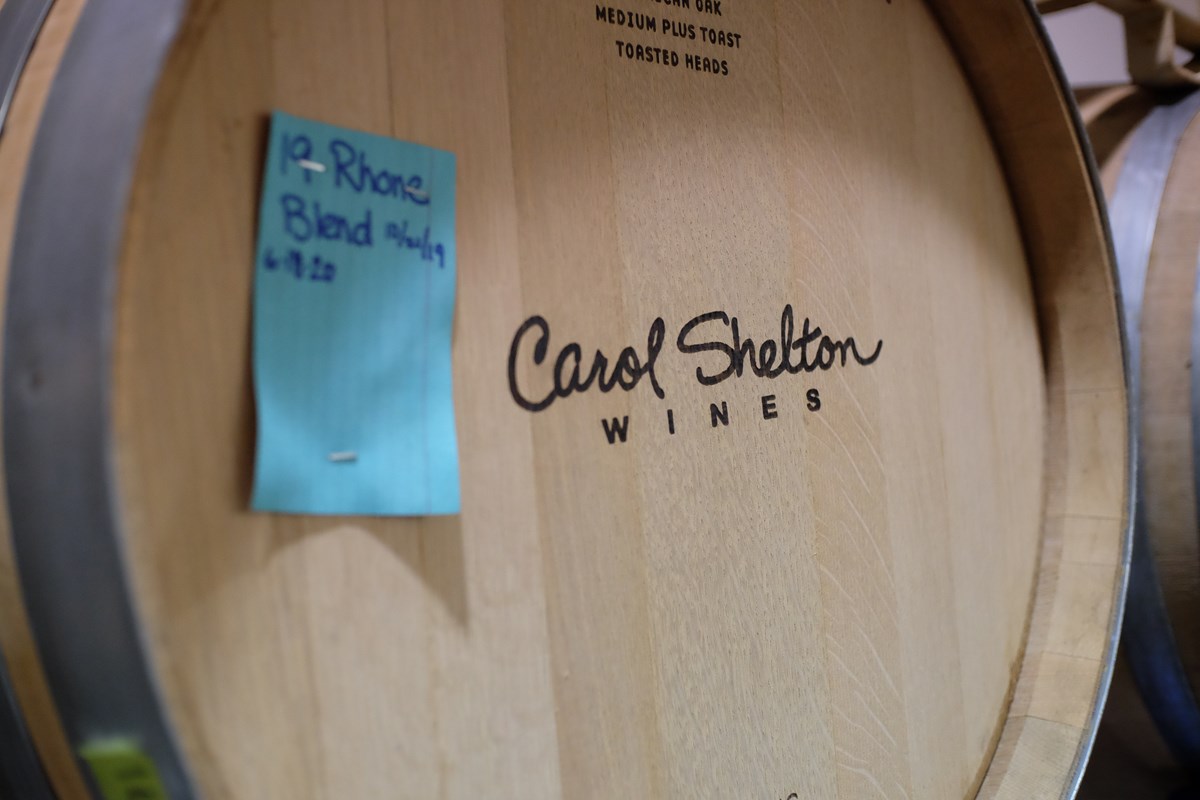 A barrel in the storage room at Carol Shelton Wines, based in Santa Rosa.Scott Rodd / CapRadio

And the impact trickles down to farmworkers. Many are paid by the weight of a workday’s harvest.  Lighter grapes mean a lighter paycheck.

Hannah, with Conservation International, says climate change can alter the identity of a wine region, since certain grape varietals are more sensitive to heat and smoke.

“If they're currently marketing pinot as the signature variety of their region, that may not be the case in the future,” he said.

He says vineyards and governments have to start thinking about potential land-use complications, as growers move into areas that haven’t seen large-scale agriculture. One potential issue, for example, is whether groundwater reserves in these places can support grape growing.

“As we look ahead to see what the future of climate looks like, a critical piece is the important role vineyards and pastures play in slowing and stopping wildfires,” she wrote in an email.

However, vineyards are not fireproof, as illustrated by the Glass Fire. Kruse also noted that the California Land Stewardship Institute is also working with vineyards in the region to make them more eco-friendly.

Despite the long-term uncertainty looming over the region, growers and winemakers remain optimistic about this year’s vintage.

“It’s easy to get focused on the negative part of it, but some of the wines that have come off some of the first things we picked are spectacular,” Bowland said.