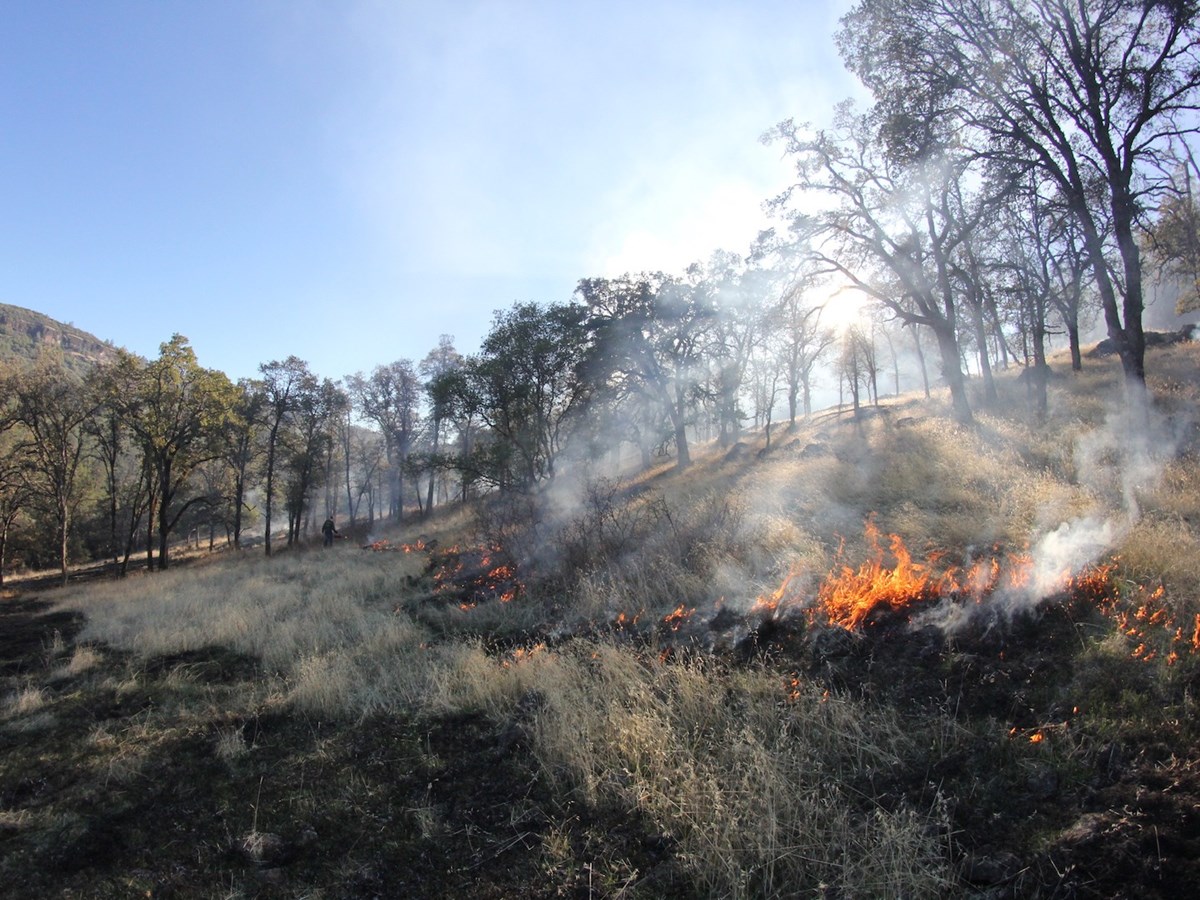 A cultural burn in 2015 in the Big Chico Creek Ecological Reserve in California.

Down a long, single-lane road in the most northern part of California is Karuk territory — one of the largest Indigenous tribes in the state. It’s here that Bill Tripp’s great-grandmother, who was born in the 1800s, taught him starting as a 4-year-old how to burn land on purpose.

“She took me outside — she was over 100 years old — and walked up the hill with her walker," Tripp recalled, “and handed me a box of stick matches and told me to burn a line from this point to that point.”

Those cultural burns — or prescribed burns, as they’re often called now by fire agencies — are a form of keeping wildfire in check, a practice the state and federal agencies do use, but experts say isn’t leaned on enough as a fire prevention tactic.

Tripp grew up in a traditional village where his family has lived for millenia. He spent his adolescent years “keeping the area around our house burned off — a lot of times just by myself.”

In a perfect world, if the landscape of California was still stewarded continuously with Indigenous fire, we would definitely not see the same level of fires that we're seeing.

But Tripp, now deputy director of eco-cultural revitalization for the tribe’s Department of Natural Resources, realizes his cultural fire education was a skill many other Indigenous people didn’t have the opportunity to practice.

“Once I started connecting with more people from outside of our village it started to become kind of apparent that the world that I grew up in was kind of unique and different in the world today,” he said.

Tripp’s experience dates back to way before his time when Native American people were largely removed from the California landscape in the mid-19th century — more than 16,000 were killed, others were forced onto reservations and many were enslaved.

Char Miller, director of environmental analysis at Pomona College, said that altered the state in ways its residents are feeling in the 21st century.

“Once the state of California enacted what we can call a genocidal attack upon native people … what started to happen was the lands that they stewarded started to do what nature does, which is to grow,” Miller said.

While climate change and a history of fire suppression are among the top reasons why experts say wildfires have grown so big so fast, Miller and others say removing Indigenous people from the landscape is an overlooked reason behind today’s explosion of fires.

“There's this whole other story that’s … meteorological that has nothing to do with race, and yet it collides with this kind of professional racism that led to the suppression of fire,” Miller said.

Removing millenia of knowledge from the land has resulted in the wildfires we see today, Miller said. And with the west engulfed in flames, Miller says it’s forcing the agencies that govern land to rethink suppressing wildfires.

“If the reckoning is about fire, and how we might manage it …  this can serve two purposes, which is to acknowledge historic and contemporary wrongs as a fire tool, and as a social policy that amplifies Indigenous knowledge in a way that we have never done,” he explained. 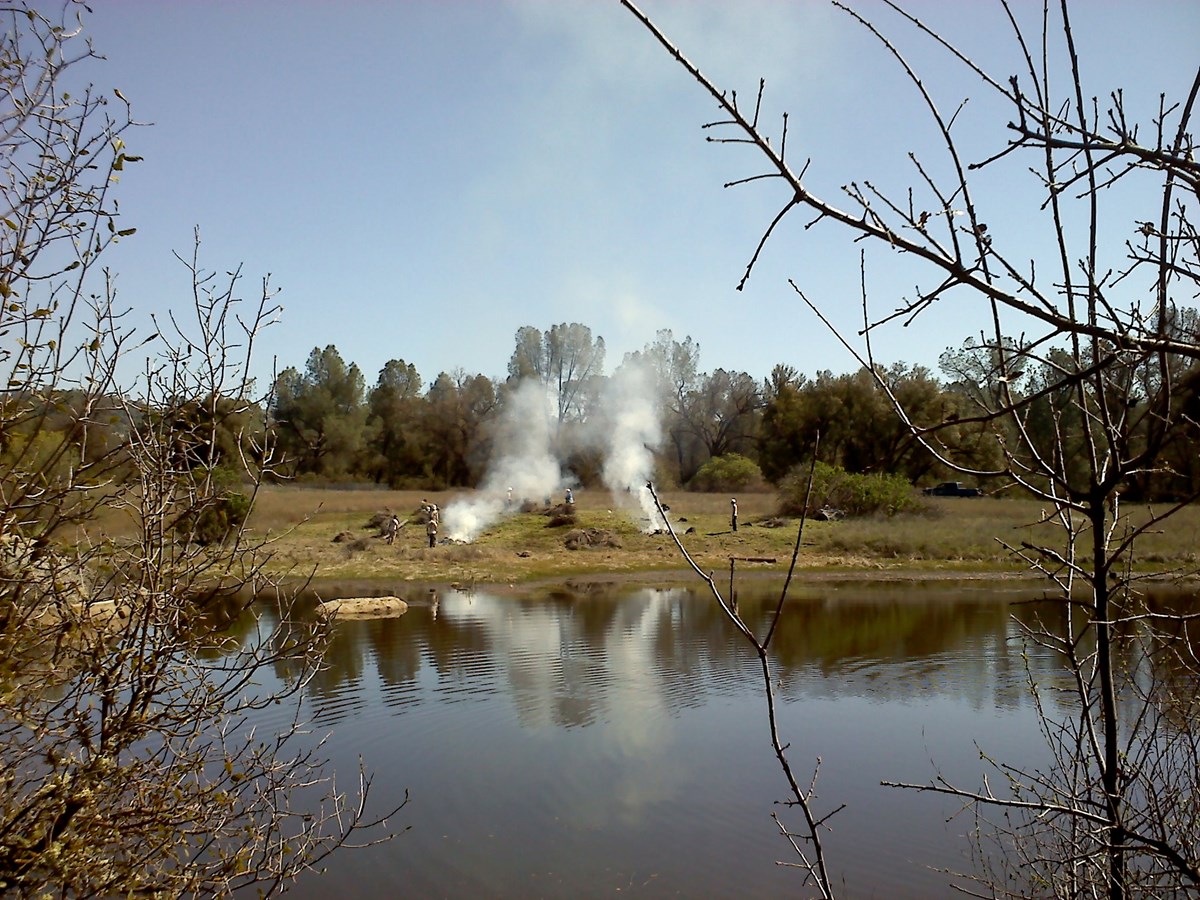 A cultural burn in the Sierra foothills.
Courtesy of Jared Dahl Aldern

One of the ways Native Americans helped keep land healthy is through prescribed or managed fire. That’s where fires are lit on purpose to keep extra fuel from building up. Reengaging with tribes to expand prescribed burns, Miller says, could be a way to “burn the traces of racism even as it makes those forests healthier.”

Ecological Historian Jared Dahl Aldern says the removal of people who had a seasonal relationship with fire completely broke the cycle of good fire on the land.

“They were lighting fires in certain places at appropriate times for cultivating food,” he explained. “So you've removed the native influence and now you've prohibited essentially all fires. The problem with that is it's a losing gamble, because you're creating the conditions for an eventual large fire to catch all that fuel.”

He says the idea of returning to prescribed burns on the landscape isn’t always an exact match with the world we live in today — nearly 40 million people live in California, so many entities manage land, and there are three million homes in mountain areas.

He advocates for cultural practices to be used in a chain-like fashion in areas where it’s possible.

If our Indigenous rights to burn would be recognized, and we could get some consistent and reliable funding mechanisms in place, then we could do it ourselves.

“Let's follow Indigenous peoples' lead with their desire to cultivate certain resources with fire,” he said.

“In a perfect world, if the landscape of California was still stewarded continuously with Indigenous fire, we would definitely not see the same level of fires that we're seeing,” he said.

Hankins says taking care of the land with an Indigenous perspective could still be a reality, although not quite scalable across all landscapes because the California of today is very different than a century ago.

Neither agency-prescribed burns or Indigenous burns are at the scale needed to make a real impact, he said.

“If we added up all the different places in California where Indigenous people are actually practicing within the landscape, we're only adding maybe a few thousand acres of land,” he said, “which is pretty small beans when we think about the scale of these fires currently over 3 million acres in the state.”

Hankins has taken his Indigenous perspective to his neighborhood and also applied it to maps of large-scale forests. He hopes the current tension around wildfires results in picking up Native American practices on private, state and federal land.

“I think it's possible. It is challenging, because … we've got smoke-sensitive groups,” he said.  “We just have to get to a point where people are willing to accept a little bit of smoke for the greater benefits.”

“I Too Have Struggled”

Ron Goode, tribal chairman of the North Fork Mono, has been working for decades trying to convince people to apply Native American knowledge to the land.

“I too have struggled, but I’ve basically been patient enough to wait for the forest region to come around to how I think,” he said.

Goode is a proponent of prescribed fires and rehabilitating mountain meadows, which when restored act like a wet sponge holding snowmelt. He says he’s entered an agreement with state and federal agencies in his region near Fresno to do more prescribed burns and restore meadows.

“We are in the midst of a planning grant to do nine more meadows than the six that I've done —  so, that's a start,” he said.

The land was constantly on fire. Removal of Native Americans from the land is the result of what we have today.

But with as many as 10,000 mountain meadows in the Sierra Nevada, he says the scale is not where it needs to be due in large part to the loss of Native American knowledge. He says there were around 350,000 Native Americans historically who lived across California, and they burned 2% of the state annually as a form of protection, food supply and for the health of the ecosystem.

“The land was constantly on fire,” Goode said. “Removal of Native Americans from the land is the result of what we have today.”

Goode says what was removed is the spiritual connection Indigenous people have with the land, which, in part, resulted in the fire suppression we are experiencing more than a century later.

He says what was revealed by the historic actions of agencies like the Forest Service, is they were “not thinking in terms of how to take care of the land and how to make the land sustainable.”

Starting With The Legislature 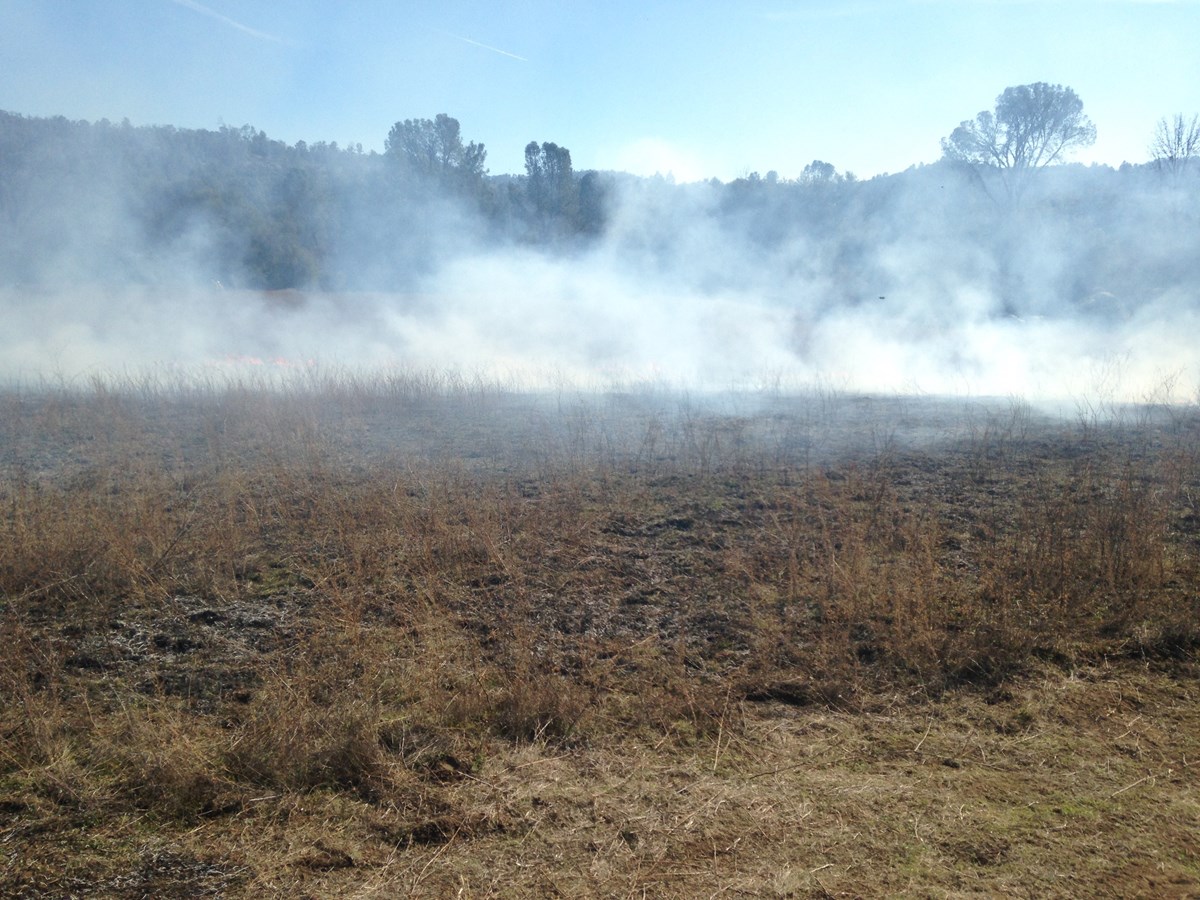 A cultural burn in Mariposa, Calif. in February 2020
Courtesy of Ron Goode

To take these ideas to the next level, Miller at Pomona College says a restructuring of how the state and federal government spends money on fire fighting and suppression is needed. It could also fundamentally address anti-Indigenous sentiment in California’s history.

Miller says it could start with the California legislature reevaluating funding for entities like Cal Fire.

“What if the state legislature begins to rearrange the budget?” he questioned. “That's an incentive signal. So you get legislators who are savvy about some of these issues, and you begin to make a kind of political shift, because it was a political shift that brought about the kind of fire and fire suppression that we're talking about.”

Miller says the current wildfires are bringing up the idea of moving agencies like Cal Fire and the Forest Service into becoming more proactive than they are today.

I too have struggled, but I’ve basically been patient enough to wait for the forest region to come around to how I think.

“So let's start to look at that structure,” Miller said. “And I argue that, as important as Cal Fire is as a protective agency, it's not been [very] proactive, so let's move on.”

Still, Bill Tripp, with the Karuk Tribe at the northern edge of California, says there are signs of hope. He says some of the Forest Service agencies in his area have “completely embraced” a collaborative stewardship process and have hired Indigenous people to lead their ecological and fire divisions.

But he says hurdles remain because of the bureaucracy that comes with permitting prescribed burns and the fact that state and federal agencies are primarily focused on fighting fires.

“There are still institutional barriers that even the most progressive line officer can't overcome,” he said. “If our Indigenous rights to burn would be recognized, and we could get some consistent and reliable funding mechanisms in place, then we could do it ourselves.”

In the meantime, wildfires still rage. The Slater Fire has had a direct impact on Tripp’s tribe. As of Wednesday it was 10% contained at just over 148,000 acres.

“It’s very sad to see,” he said. “We just lost about 40% of our homes just to the north of where I live here. A good portion of local communities are now homeless.” 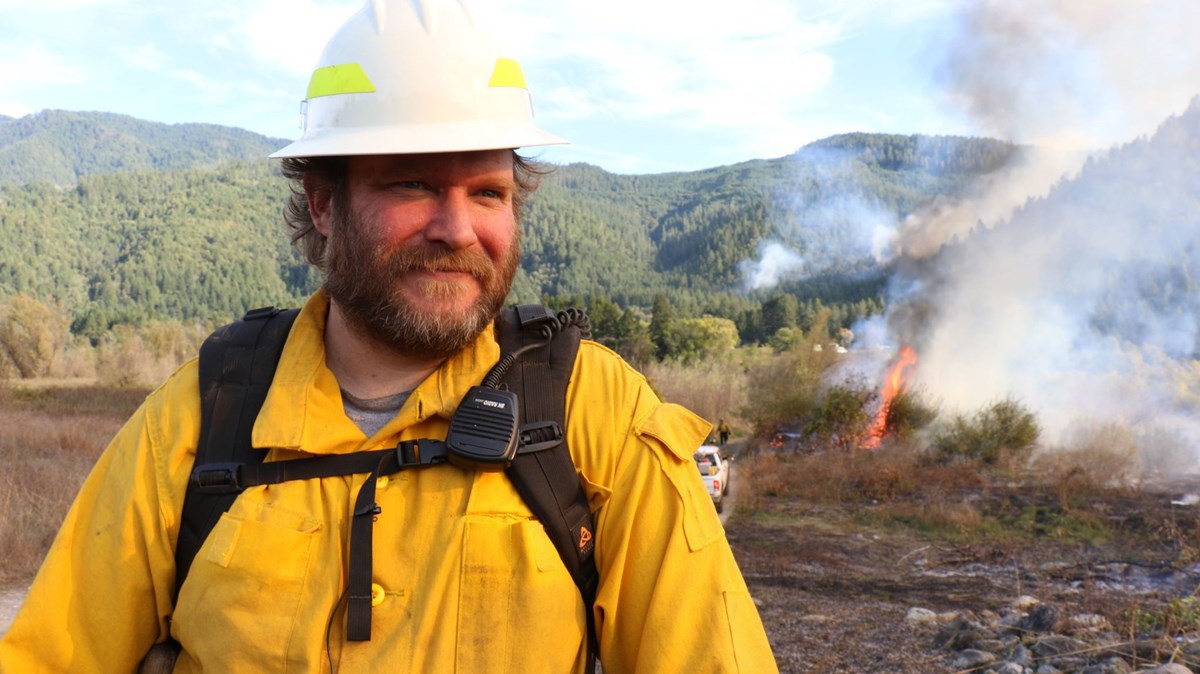 Bill Tripp, whose great-grandmother taught him as a young child how to burn land on purpose to prevent large wildfires later.Courtesy of Bill Tripp
Follow us for more stories like this