A postcard sent out nationwide this week by the United States Postal Service created confusion among some who plan to vote by mail in California, leading state and county election officials to set the record straight.

The postcard urges Americans who plan to vote by mail in the general election to “plan ahead.” Specifically, it tells them to “request your mail-in ballot” at least 15 days before Election Day and to “add postage to the return envelope if needed.”

That’s good advice in many states where voters must ask for the ballots and pay for postage.

But under a new California law signed this year, all active, registered voters in the state will automatically be sent mail-in ballots, with the postage already paid. State Democratic leaders pushed for the requirements so that voters would not have to cast their ballot in person amid the COVID-19 pandemic. 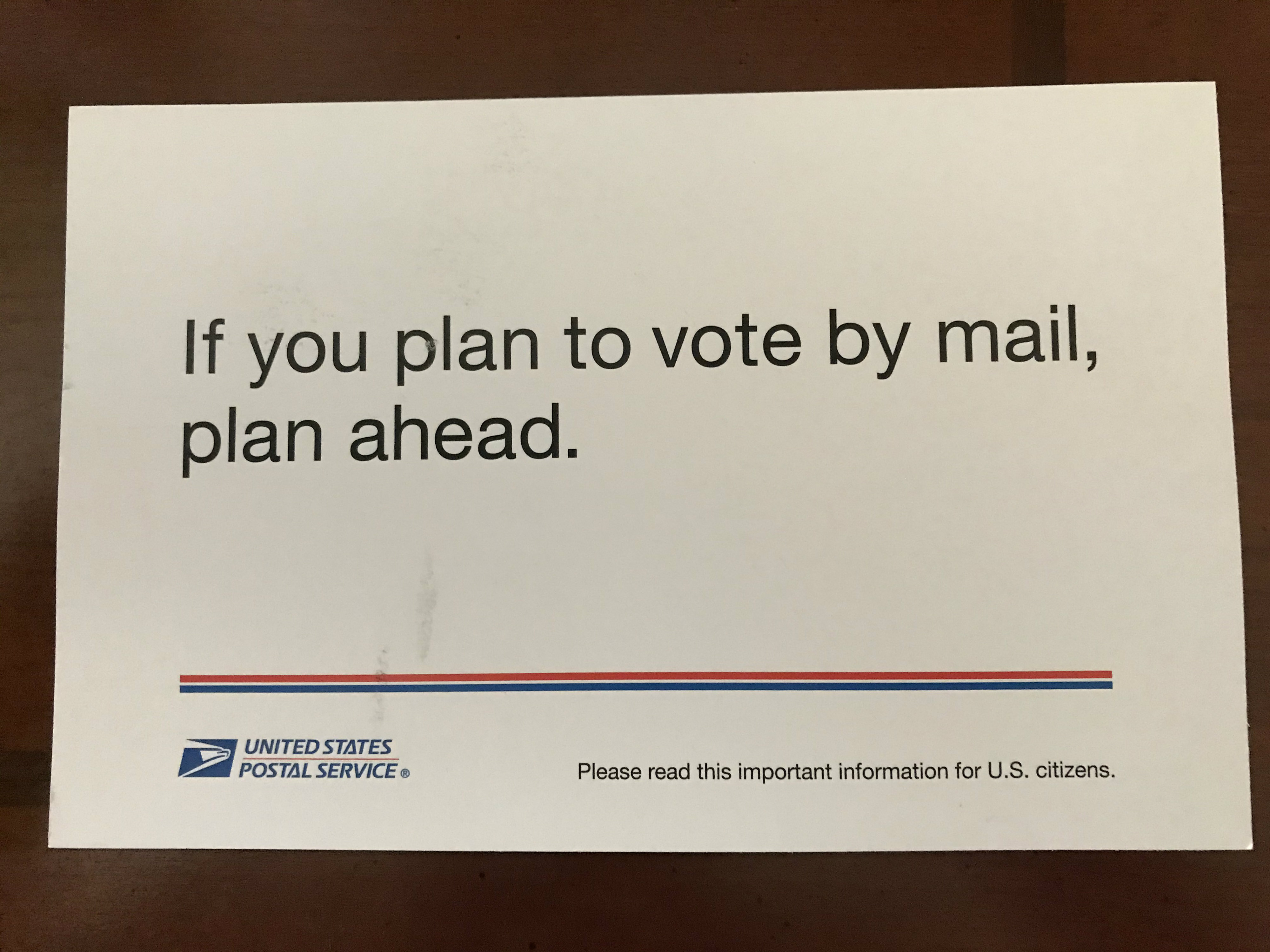 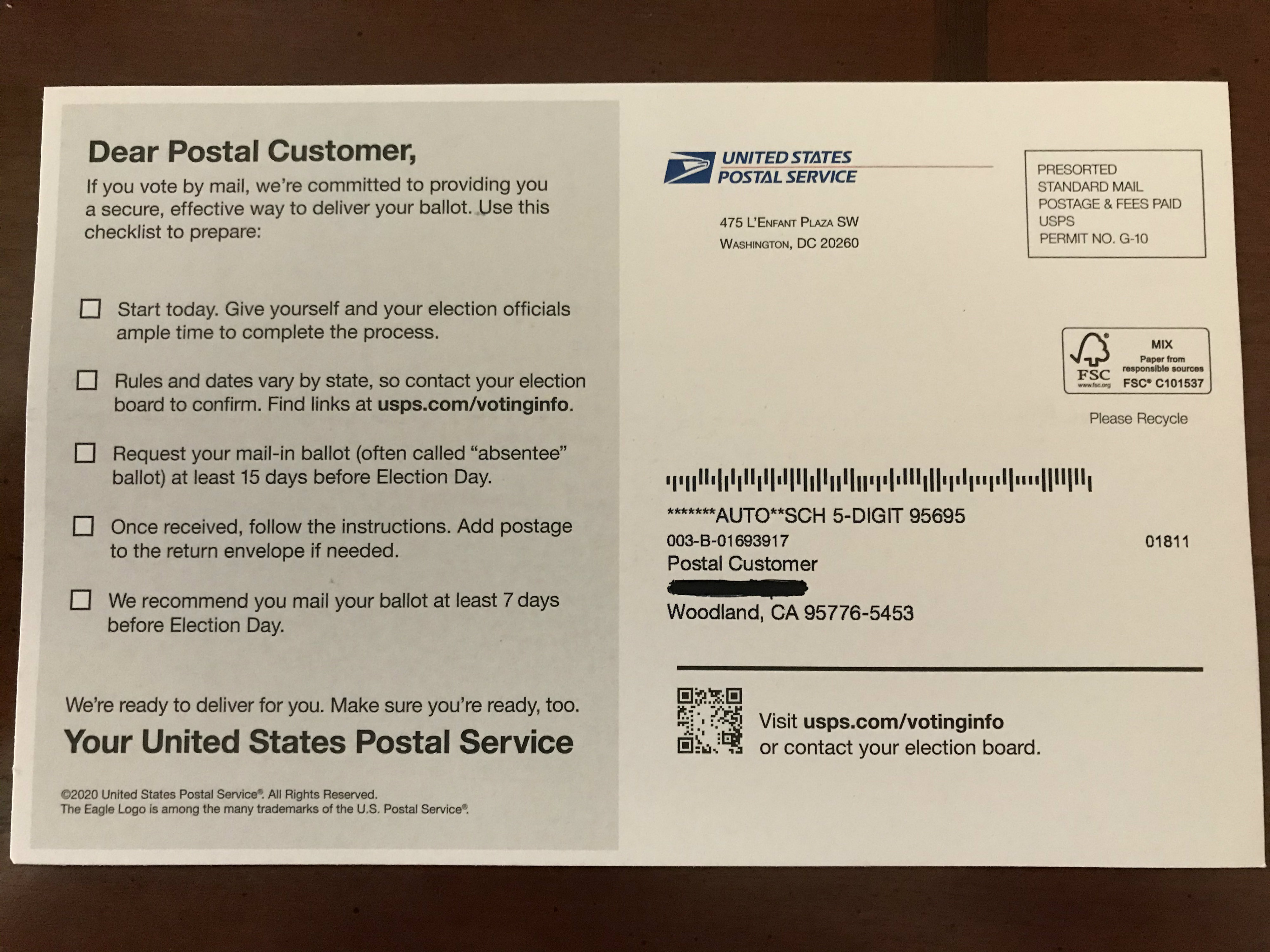 The postcard sent out nationwide by the U.S. Postal Service Chris Nichols / CapRadio

The Facts On Mail-In Voting In California

Local election officials around the state answered questions Friday from voters puzzled about the advice from USPS.

One county released a media advisory trying to stem the confusion:

“Sacramento County Voter Registration & Elections would like to remind residents that in California, you do not need to request an absentee ballot – all active and registered voters will be mailed a ballot beginning October 5th,” Janna Haynes, Sacramento County elections spokesperson, said in a written statement.

Later on Friday, a spokesperson for Yolo County’s elections office said it also planned to advise voters they do not need to request a mail-in ballot.

A staffer at the San Diego County Registrar of Voters told PolitiFact California that her office had also received questions about the postcard on Friday morning. She said there was no need to request a mail-in ballot, but she encouraged all voters to verify their registration.

California Chief Deputy Secretary of State James Schwab also weighed in on the confusion on twitter, writing “Appreciate the effort @USPS, but this could be confusing for California.

Appreciate the effort @USPS , but this could be confusing for California.
1) No need to request a mail ballot.
2) Return postage is pre-paid - first class.
3) We allow ballots postmarked by Election Day to count if they arrive with 17 days.
Follow @CASOSvote for Official CA Info pic.twitter.com/6eC297NCh9

How Early Should You Send In Your Mail-in Ballot To Make Sure It Gets Counted?

New Postmaster General Louis DeJoy ordered cost-cutting changes this summer that resulted in mail delivery delays across the country. This, in turn, led to widespread concerns that the Postal Service would not be able to handle a surge in mail-in ballots this fall and that voters should return their mail-in ballots as early as possible to make sure they are counted. Many are planning to return those ballots in-person.

In July, several widely-shared social media posts suggested that Election Day for Americans who want to vote-by-mail is really Oct. 20 and not the official date, Nov. 3. They also say the Postal Service recommends allowing "at least 14 days roundtrip" to ensure they can request, fill-out and send back their mail-in ballots on time.

PolitiFact California found some of this is accurate, but not for all states.

"The most common state deadline for election officials to receive absentee or mail ballots is on Election Day when the polls close," the National Conference of State Legislatures says on its website. "Some states, however, accept and count a mailed ballot if it is received after Election Day but postmarked prior to the election."

Even in states with early deadlines, however, voters have options. They can speed things up by using a ballot drop box or returning their ballot at in-person polling locations.

As the postcard sent out this week proves, the Postal Service does recommend the early request of mail-in ballots. It says voters should do that as early as possible and no later than 15 days before the election. It also recommends returning those ballots at least a week early and contacting local election officials about deadlines.

Election experts and officials — and the Postal Service — encourage voters to act early and to check local rules in each state and county.

“Rules and dates vary by state, so contact your election board to confirm,” the USPS postcard reads. “We’re ready to deliver for you. Make sure you’re ready, too.”

That last part is good advice in California and beyond.