There were two different worlds this past Memorial Day weekend on the American River: People who followed Sacramento County’s COVID-19 guidelines as they let the current take them down the waterway — and people who didn't.

Raft rental groups like the American River Raft Company, which says bookings are about 25% of normal, are trying to get people to social-distance to prevent exposure to COVID-19.

Customers have to wear masks, there’s plexiglass between the cashier and visitors and limited parking.

Kent Hansen, co-president of the company, says the large parties need to wait until after the threat of COVID-19 infections lift. “The main thing is that people should only share a raft from the same household, no tying rafts together and no stopping along the way to congregate with people,” he said.

Alvin Rivas and his three friends traveled from San Francisco to float. They said they are following the rules, but weren’t wearing masks when they launched their raft.

“They allow only like one person for your party to go in to get it, and everyone's maintaining distance,” Rivas said. “We got some sodas. We got sandwiches ready. We got water. I think we're set.” 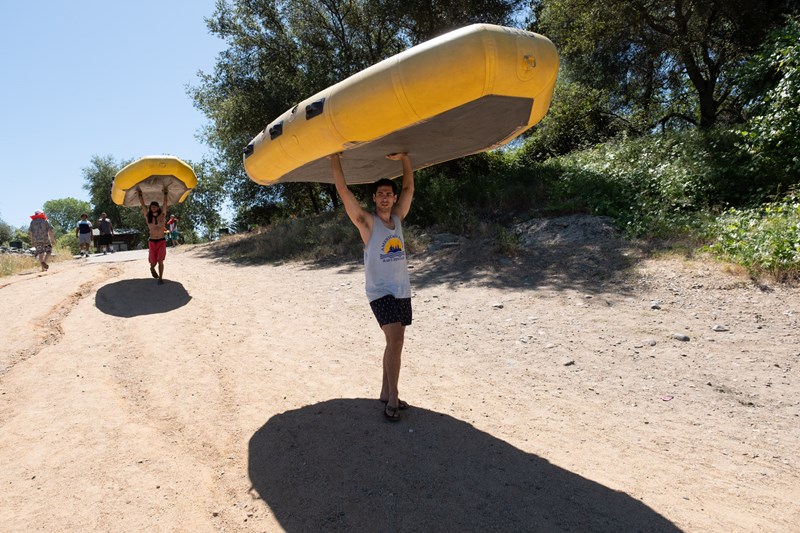 A few feet away from where Rivas launched into the river, groups of floaters disregarded the county’s social-distancing orders altogether.

Many people brought their own rafts, then tied them together with others, linking a dozen or so people. And when CapRadio asked to interview some groups, they laughed, admitting that they were not social-distancing.

This week, it’s supposed to be in the 100s in Sacramento for the first time this year. But with stay-at-home orders slowly lifting and the threat of COVID-19 as real as ever, how can people safely and responsibly enjoy this summer pastime?

People are allowed to float, according to Sacramento County health officer Dr. Olivia Kasirye, but additional measures have to be in place, like not tying rafts together.

“There's no mixing between the different family units or household units,” she said.

Kasirye also recommends sick people or those with chronic conditions or people the age of 60 or 65 avoid rafting.

The guidelines are about minimizing risk of infection, Kasirye says, even though most are not enforceable.

“It is an honor system, because we're not going to have officers at the river checking who belongs to what household,” she said.

If you do go out on a river, the county recommends social-distancing at all times. “If there are too many people, be willing to leave so that we don't have any crowding,” she said.

Visitors also need to remember that the water is snow melt and very cold, whether they’re in the mountains on the Truckee River or in the valley.

If people do float on the Truckee, the Forest Service is recommending they stay six-feet apart, not gather in groups and alert others when near them and pack out all trash.

The threat of COVID-19 compounds the danger of floating this year, said David Rolloff, a recreation therapy professor in the Recreation, Parks and Tourism Administration Department at Sacramento State.

He’s referring to drownings, environmental hazards — cold water, hot air and fast currents — and the day-drinking culture that comes with the leisurely activity.

“You already have a time of heightened worry over the risks, but now there's this unknown in many respects about how the virus is going to behave,” he said. 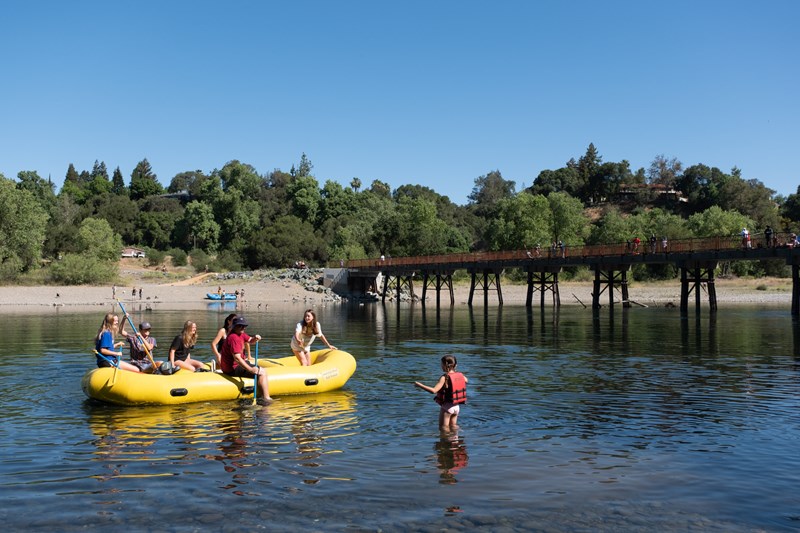 A family sets out on a rental raft at the Sunrise Recreation Area Sunday, May 24, 2020.Andrew Nixon / CapRadio

Rolloff says people who choose to go out on rivers this summer need to be vigilant about their health and exposure to people outside their households.

“When people go to settings where they kind of are on vacation-mind, their mindset changes,” he said. “Sometimes that distraction can expose them to more risk. Like when we hear about people who fall over waterfalls, it's oftentimes because they're just unaware of how extreme risks can be.”

His advice for river-goers this summer is to enjoy the natural world, but to avoid crowds and find spaces where there are fewer people.

“There are tons of places that are fairly open in the Sacramento area,” he said. “We're fairly lucky that we've got a large regional park system, but I just think the traditional places like Sunrise or Paradise Beach might be a bit crowded, and I would definitely avoid those places.”

Rafting companies in the Sunrise Boulevard area are encouraging people to come. But they have to make a reservation, and Hansen with American River Raft Rentals says Memorial weekend he’s booked, but has openings this week.

“We're limiting the number of reservations per hour, and that means the majority of our rafts are just sitting there unused, uninflated, because we're making sure that we can control the flow of people coming into our facility and getting onto the river,” Hansen said.

The company is renting about 10 rafts an hour and has new rules in addition to not tethering rafts together, like recommending masks at the rental site, no drinking and limiting passengers on the bus that transports people from the end of their floating journey to their cars.

For Hansen, there’s a delicate balance of running a popular rafting company and caring about his family.

“I have a six-month-old at home, and so there's no way I would ever put money in front of my family's health,” he said. “As we continue to ramp up with more and more reservations per day, it's about making sure that there's no areas on the river that can be bottlenecked.” 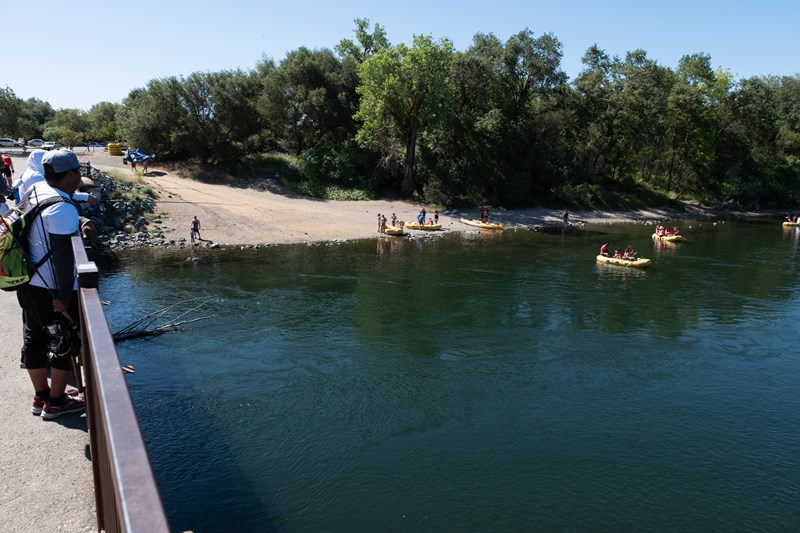 People fish off the pedestrian bridge at the Sunrise Recreation Area Sunday, May 24, 2020.Andrew Nixon / CapRadio

Hansen says there are consequences for people who break the rules.

“If rafts are tied together or if you're stopping along the way to conjugate with groups from outside of your household and not social distancing, we will keep your whole deposit, and we'll let you know that you're not welcome to return this year,” he said.

He says rangers will be out as well encouraging people to socially distance.

“They have the ability to call us and find out who is in charge of which raft based on the number on the front of the boat,” Hansen said.

Crews also clean rafts after every use and busses are fogged with a chemical that kills 95% of bacteria after one treatment, he said.

“They get mopped out with bleach, soap and water,” he said. “All of our life jackets and paddles get sprayed down with the bleach and water.”

All these practices take twice as many people, but he says it’s worth it for now.

“The problem is this isn't a sustainable business plan, because, obviously, June, July and August are really busy months,” he said. “We're missing out on all our big groups right now. This will definitely hurt us very badly if the restrictions don't ease up a bit.”