As unemployment claims flood its Employment Development Department, California is seeking help from a company that has been criticized for past department projects.

California awarded a no-bid, $5 million contract this month to multinational company Deloitte for services that include improving the online portal for processing unemployment claims. But the company appears to have a pattern of problematic work and going over-budget on state projects.

“Choosing a contractor that has previously mismanaged a similar project is very troubling,” said Democratic Assemblymember David Chiu, who sits on the Assembly budget subcommittee that oversees state administration.

In 2010, the department awarded Deloitte a contract to overhaul its unemployment benefits system. The project ballooned to $110 million — nearly twice the original estimate from the state.

Then, hundreds of thousands of claims were held up by issues with the system’s new software, according to reporting by the Los Angeles Times.

As a result, state lawmakers hauled in EDD and Deloitte officials to answer questions on the fumbled project. 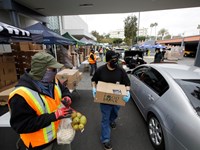 Around the same time, Deloitte was tasked with updating the EDD’s system for handling disability insurance claims. That project came in at $158 million, which was $123 million over the project’s original estimate, according to The Orange County Register.

In an emailed statement, EDD spokesperson Loree Levy said there are “a number of protections in place” to ensure Deloitte delivers on the contract.

“The demand for unemployment insurance and other benefits skyrocketed as Californians were laid off or furloughed,” Levy wrote.

She added that the influx “required additional IT support to carry out the complexity of programming needed for claim processing.”

Jonathan Gandal, managing director at Deloitte, wrote in an email the company is “deeply committed” to working with the EDD during this economic crisis. “Since we won a competitive procurement 10 years ago, we have been helping EDD redesign, enhance and scale the nation’s largest unemployment insurance program,” he added.

He says previous cost increases for the unemployment system overhaul were caused by changes in the project’s scope and the need to meet new federal and state mandates.

The EDD has come under sharp criticism from the public and lawmakers in recent weeks. It has received over 5 million applications for unemployment insurance since the start of the pandemic, creating a substantial backlog of unprocessed claims.

“We get calls every day from our constituents about it, waiting a month or eight weeks for [benefits],” Democratic Assemblyman Jim Cooper said. “It's ridiculous.”

Legislators occasionally balanced their criticism by acknowledging the unprecedented challenges facing the department. After California’s stay-at-home order went into effect, statewide unemployment jumped from 5.5% in March to 15.5% in April.

“I think you’ve done a tremendous job of pulling in as many resources as possible,” said Democratic Sen. Anna Caballero during a Senate budget hearing Thursday, after highlighting challenges faced by her out-of-work constituents.

That effort has included transitioning 1,300 employees to the EDD’s unemployment insurance branch from other areas of the department and other offices in state government. It additionally expanded its call center availability to 12 hours a day, seven days a week.

It has also meant hiring outside contractors such as Deloitte.

Under the contract, signed in mid-May, Deloitte is tasked with improving EDD’s online system for processing applications for the Pandemic Unemployment Assistance program. The federal program extends benefits to workers who are typically ineligible for traditional unemployment insurance, such as contractors and the self-employed. Deloitte will also provide “project management [and] operational support” for EDD, according to the contract.

Gandal says the contract builds off the company's previous work with EDD, including securing a competitively bid agreement in 2017 to continue providing maintenance and services for the state’s unemployment system.

The latest Deloitte agreement is among the dozens of contracts California has entered into in recent months that did not go through the standard bidding process.

The use of no-bid contracts is not unusual in emergency situations. But critics say it can lead to agreements with unscrupulous vendors or delivery of shoddy goods and services.

The coronavirus pandemic is no exception. No-bid contracts for hundreds of millions of dollars worth of protective equipment have faltered or failed to materialize altogether.

The Deloitte contract is substantially smaller than those deals. Still, Chiu says it’s the type of no-bid agreement that raises questions.

“It’s possible that the issues Deloitte had on the first go-around aren’t true now,” Chiu said. “But the optics of choosing them for a similar project today are not good.”

California had approximately 1.9 million unemployment insurance recipients in April, according to figures released Friday, representing an increase of 1.4 million beneficiaries from March.