More than home-cooking or even a roof over his head, Air Force veteran Mark Lytal says a hot shower was the best thing after returning from one of his deployments to the desert.

Now, the retired technical sergeant is offering that same comfort and basic hygiene to hundreds of people who are experiencing homelessness in Sacramento and vulnerable to COVID-19.

He makes it happen through the volunteer program Showers On Wheels For Unhoused Patrons, which he calls “Show Up,” for short. 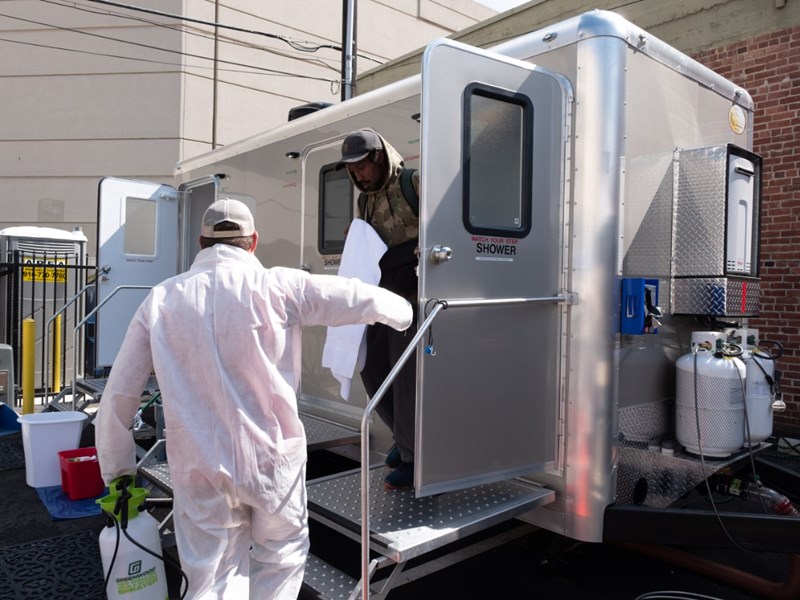 Gee White leaves the mobile shower after using it while organizer Mark Lytal is ready to disinfect it right away in downtown Sacramento on Friday, April 10, 2020.Andrew Nixon / CapRadio

Seven days a week, he sets up his silver trailer in a parking lot at St. John’s Lutheran Church in Midtown. It has three separate spaces, each with a shower, sink, fresh towels and body lotion.

“We do upward of 100 showers a day,” Lytal said as he prepared bleach stations outside the trailer, which he uses to sanitize the equipment to clean the stalls after every shower.

Staying clean and washing hands is crucial to staving off viral outbreak. “And they can’t do that out on the river,” Lytal said of the homeless community. “But when they come and see me, they know they’ve got a nice hot shower, and we’ve got the soap for them. We’ve got the compassion and the love that they’re not getting from elsewhere because everybody’s closed.”

“He does not take a break,” said Gina Saraceni, who hands out sack lunches at the site. “He’s here seven days, every single day.” 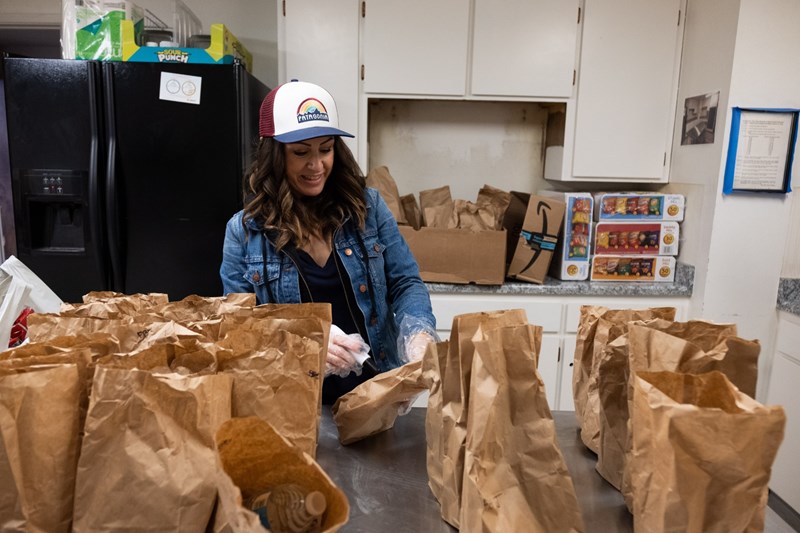 For 76-year-old Ray Keene, getting a shower “makes you feel like a million dollars.

“It really helps my ego. Stress is real bad out here on the street, it really is,” he said.

Mikey Goodwin said he used to shower at his gym before it shut down due to the virus. Right now, there aren’t many options.

“It’s a lot easier to find work when you’re clean,” the 21-year-old added.

When the lines get long, each person gets 10 minutes inside the trailer. After every shower, Lytal dons a painter’s suit, respirator and gloves and bleach-cleans the stalls. 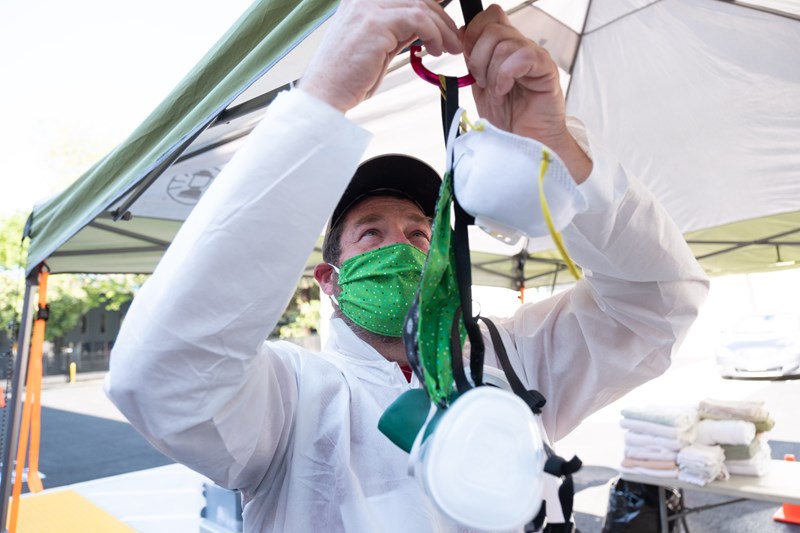 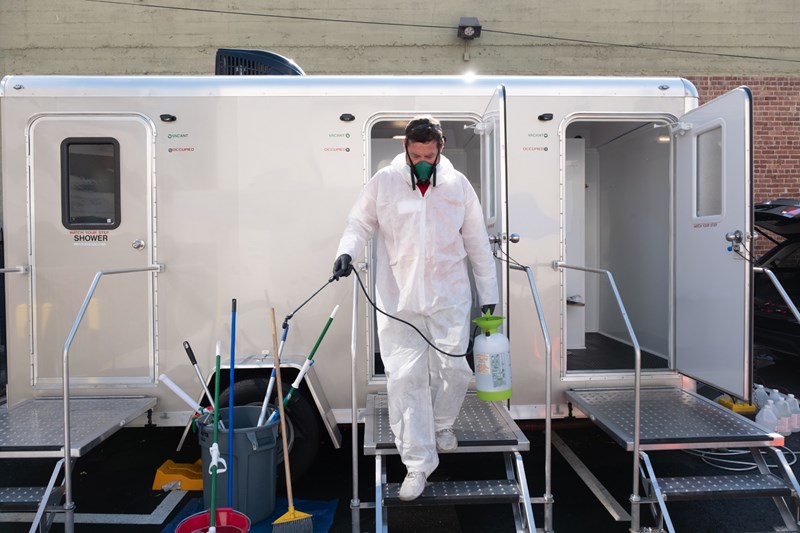 As people line up, Lytal hand outs new underwear, socks and a smile.

When the showers get damaged because someone’s too forceful or uses a stall as a bathroom, Lytal shuts it down.

Lytal said he spends about $3,500 a week on supplies, from socks and underwear to gas and cleaning solutions, while sack lunches for the unhoused are donated by Bayside churches across the region. Bags of food and clothing are also dropped off by families. 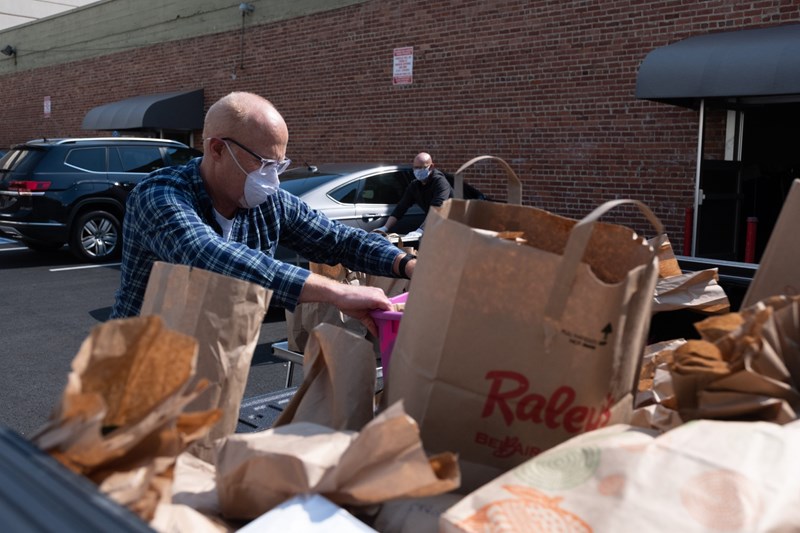 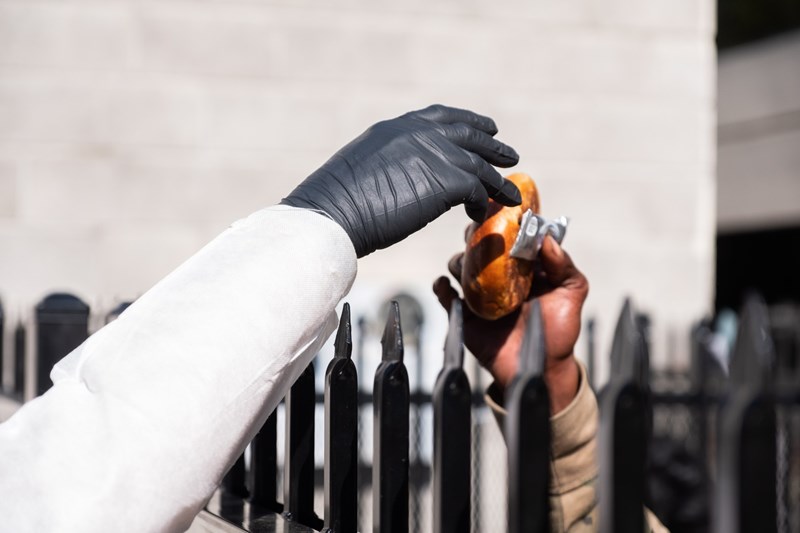 Before opening, donated bagels from Noah's Bagels are warmed and distributed to people waiting at the mobile showers at St. John's Lutheran Church in downtown Sacramento on Friday, April 10, 2020.Andrew Nixon / CapRadio

To pay for the program, Lytal relies on small grants and donations and has raised about $8,150 on a GoFundMe page.

He said his program is the only one he knows of in the region. About two weeks ago, Lytal said a city government official expressed interest in replicating the program but found manufacturers couldn’t provide similar trailers until the summer.

City officials could not immediately be reached to discuss the program.

Bob Erlenbusch, executive director of the Sacramento Regional Coalition to End Homelessness, praised Lytal’s work, saying it offers “some dignity and self-respect” for those on the streets.

“We’ve been trying to get the city and county to fund a mobile shower program for like two years,” Erlenbusch said.

Last week, Sacramento city and county leaders approved a $15 million joint plan to help prevent a coronavirus outbreak in the region’s homeless population. It focuses on three things: Keeping existing homeless shelters safe, providing greater sanitation at homeless encampments, and paying for 1,100 motel rooms to isolate those infected or who are at risk.

The plan says “toilets and handwashing facilities or mobile equipment” will be provided at encampments. City and county officials could not immediately say whether that will include mobile showers.

As of late last week, two Sacramento homeless people had tested positive for COVID-19, The Sacramento Bee reported. The two were hospitalized,

but reported to be “doing well,” Janna Haynes, county spokeswoman told the Bee. After they are released, they will be sent to “medically supported isolation care units” in either motels or RVs, Haynes said.

Back at the church parking lot, Lytal predicted there could be a spike in homelessness given all the economic damage caused by COVID-19.

“I could be one of those people tomorrow. Any of us could be,” he said. “I just want to be here to help them. They can come and get a meal, see a smiling face, take a hot shower. I mean, that’s the least I can do to help our community.”