Joshua Morris is not a medical professional and doesn’t work in manufacturing.

But he’s helping lead an effort to get thousands of 3D-printed face shields to those on the front lines of the coronavirus outbreak response in California.

“My heart goes out to them, knowing that they’re just trying to do their job and they don’t have what they need,” Morris said. “And it’s purely because of bureaucracy and poor planning.” 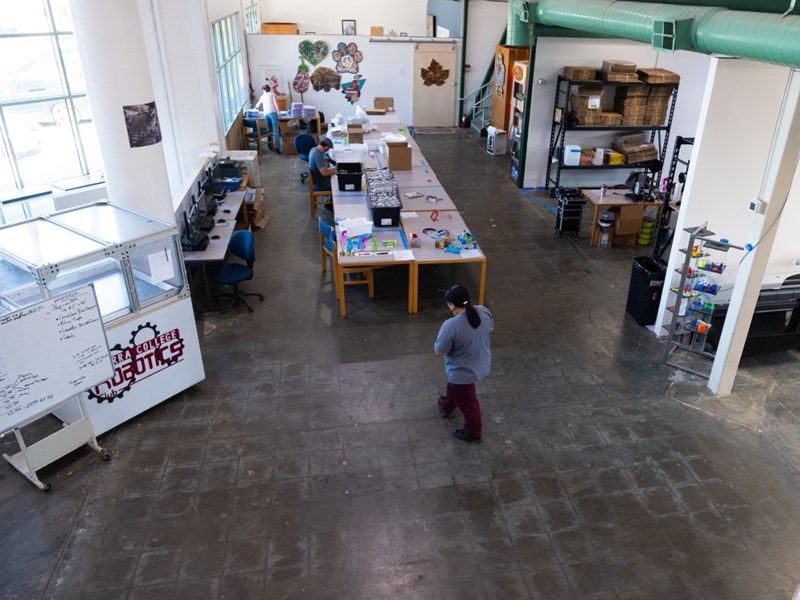 California is scrambling to get personal protective equipment to medical workers and first responders, as the total number of confirmed coronavirus cases continues to rise. Newsom has said the state needs hundreds of millions of N95 and surgical masks, face shields and gowns. A couple weeks ago, he said the state would need 1 billion gloves.

The state is making some progress. As of Friday, it secured nearly 3 million surgical and N95 masks from the federal government. Meanwhile, everyday people are finding ways to step up and contribute.

Then, his employer suspended his contract.

At home on furlough, he saw an online thread about a volunteer initiative to manufacture and distribute 3-D printed face shields. It’s a collaboration between Hacker Lab, a makerspace with locations in Rocklin and Sacramento, and Operation Shields Up, a group that helps distribute protective shields through the Sierra Sacramento Valley Medical Society.

Morris had a side passion for 3-D printing. And with his contract suspended, he had plenty of time.

So, he responded to the post, and they picked him to manage their 3-D printing.

Hacker Lab had a string of donated printers, but they needed to be programmed and synchronized to spit out shield components.

That was Morris’ first task.

“I was easily pulling 12-to-14 hour days to get the printer farm going,” he said.

They now have a streamlined process. It starts with a computer rendering that’s fed into a 3-D printer. The printer melts a specific type of plastic and precisely layers it to make the shield frame. A laser cutter shapes the clear plastic face guard, and then the shield is soaked in a sanitizing bath.

Once dry, it’s packaged with instructions and boxed for distribution. 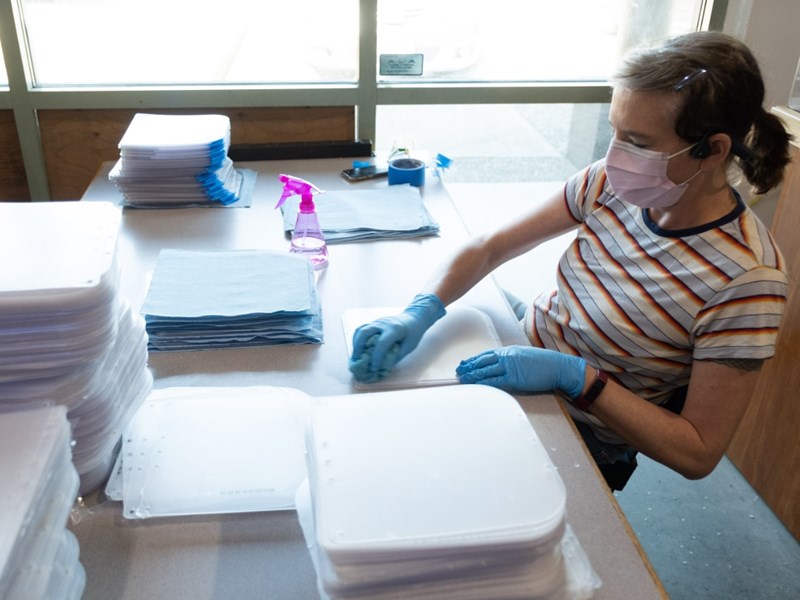 Jennifer Clark of Sacramento cleans and prepares parts of the face shields made by #OpShieldsUp on Friday, April 3, 2020.Andrew Nixon / CapRadio

Alan Puccinelli, founder of Operation Shields Up, says they’ve made about 5,000 masks, and will continue to produce them as long there is need. He says distribution has expanded beyond doctors and nurses to include first responders, such as police and firefighters.

An investigation from Reveal, published in the Los Angeles Times, found California once had a stockpile of medical equipment, including 50 million N95 masks, in case of a large-scale disaster, including a pandemic. But following the Great Recession, the state defunded the program and donated its stockpile — or, in some cases, let equipment expire.

Harold Goldstein, executive director of the nonprofit Public Health Advocates, says those actions by the state are a “tragedy.”

“People think long-term about prevention and preparedness only when there’s an emergency at hand,” Goldstein said. “We’re now behind the eight ball, and we’re all fighting to catch up.”

The project between Hacker Lab and Operation Shields Up is not the only grassroots effort to produce protective medical equipment. There are Facebook groups around the country, for example, dedicated to sewing masks for health care workers. 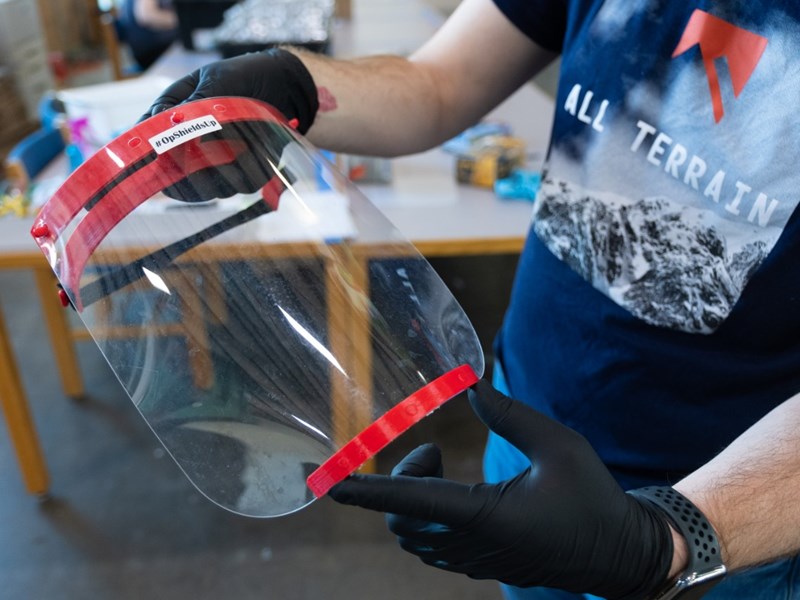 An example of a face mask with some of its parts sourced from a 3D printer and a laser cutter as part of #OpShieldsUp on Friday, April 3, 2020.Andrew Nixon / CapRadio

While it’s not the job of an average Californian to fill this vacuum of protective medical equipment, Morris says there’s a sense of duty to what he’s doing.

“I’m a veteran of the United States Army, and there are doctors and nurses and first aid responders that have been there to help me and my friends,” he said. “And they never ask questions as to who you are or why you need help. They just show up and do it. So if I can make a product that helps them do their job, I’m going to do it, without question.”