Greg Baughman expects to sell 750 four-ounce bottles of hand sanitizer by Sunday. “Last week we sold out,” Baughman said. “This week we expect to sell out again.”

But the owner of Gold River Distillery in Rancho Cordova says this could be his last week of sanitizer sales for at least a month, because the ethanol he needs to make sanitizer is on backorder. He only has about 20 gallons left.

The distillery usually makes spirits, like 100% malted rice whiskey made with local rice. But two weeks ago people began calling and asking if Baughman could make sanitizer.

Distilleries have a federal temporary exemption through June 30 that allows them to create sanitizer as long as it isn’t drinkable. Distilleries must follow rules under the Alcohol and Tobacco Tax and Trade Bureau. The recipe includes ethanol, glycerin, hydrogen peroxide and water. Baughman adds lavender oil.

“We’re not making a killing,” said Baughman. “Essentially what we're selling our product for pays rent, pays my staff, keeps the lights on.” 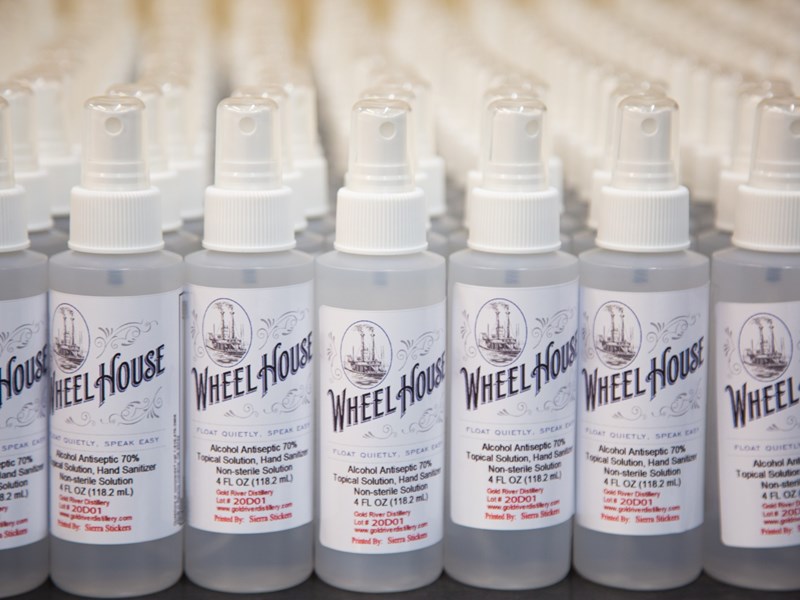 Gold River Distillery is making hand sanitizer in the presence of a shortage of mass-produced versions.Andrew Nixon / CapRadio

“We are doing a little bit of bottle sales out of our tasting room retail location — about 10 percent of what we typically do,” said Boone. “The fact that we're making just a bit of a margin on the hand sanitizer certainly has helped. I'm grateful for that and also grateful that we're able to help.”

Boone sells to the public in small bottles and says he keeps getting big orders from supermarkets, medical groups and big companies. He’s ordered 500 gallons and says he could use 1,500 more gallons of ethanol.

“PG&E called us and mentioned they just ordered 1,000 gallons from someplace and they think they can use another 1,000 gallons,” said Boone. “We had to contact a couple of the big orders and say, ‘Hey, we need to reduce your order because we can't make it fast enough.’”

Bigger operations, like J.J. Pfister Distilling Company in Sacramento, have a lot more ingredients. The company sells curbside and in bulk.

“It is 80% alcohol, which means it will kill viruses,” said Gail Keck, chief operations officer for the company. “We're hoping to make at least 5,000 gallons, but we would love to make more because we hope to continue to make it until the pandemic is stopped.”

Dry Diggings Distillery in El Dorado County is making sanitizer as well, but has a different approach. They’re giving it away to groups like the San Francisco Police Department. Cris Steller runs the distillery and says they’re taking donations.

“We just felt like our first responder frontline community couldn't have a budget this quick to adapt, and we’ll all worry about the money when all the bills come due,” said Steller.