As the COVID-19 outbreak swells, three things persist among people who live on the streets: fear, confusion and solidarity.

“What can people do to avoid it? What can people do to get better if they do catch it?” asked Vivian McCauley as she sorted through cans in a homeless encampment along the American River north of downtown Sacramento. “‘Cause some things like a fever you can’t really take care of yourself like you want to.”

People experiencing homelessness are among the most susceptible to coronavirus. Many live in cramped, unsanitary conditions and have pre-existing health conditions. State and local officials in California are rolling out efforts — big and small — to help protect this vulnerable population.

“We are quite literally negotiating with over 901 identified hotels throughout the state of California,” Newsom said during an address Tuesday. “Tens of thousands of rooms — a possibility to come into a portfolio that we could advance very, very quickly.”

Transitioning unsheltered individuals into hotels will be costly, but state leaders say it’s better than the potential alternative: burdening the state’s health care system with a rash of new coronavirus cases.

As the state’s effort ramps up, local governments are taking interim steps to improve conditions in places with concentrations of unsheltered individuals.

In Sacramento, “DJ Dave,” as he’s known around the encampment near the American River, said there had been little outreach to the community as of late last week.

The coronavirus outbreak has surfaced troubling memories for the 61-year-old veteran.

“My wife died out here of walking pneumonia, and that was something we’ve never heard of,” he said.

On Tuesday, the city of Sacramento installed hand washing stations in six locations, which were paid for by local cannabis dispensary Perfect Union. 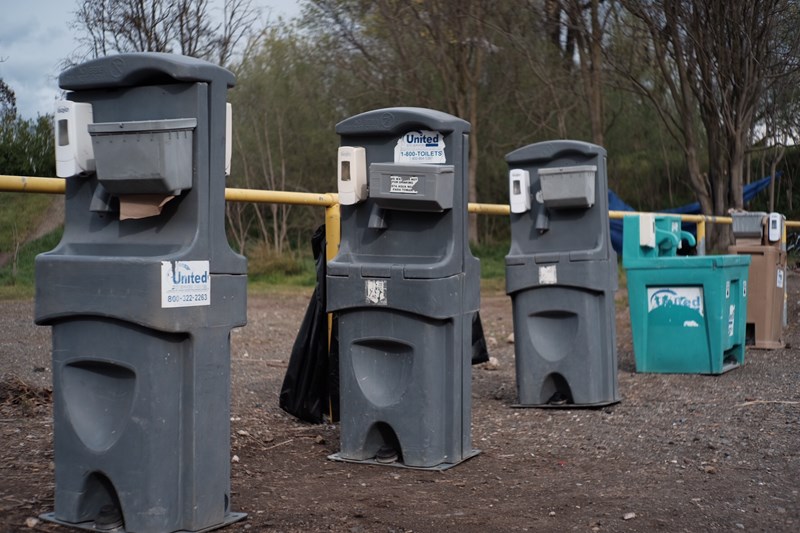 Hand washing stations near the the encampment along the American River.Scott Rodd / CapRadio

“We definitely want to get people indoors and we’re working on strategies for that,” said Councilwoman Angelique Ashby, who led the effort to install the handwashing stations. “In the meantime, one of the things we can do right now is help folks have the opportunity to wash their hands.”

Ashby says the city is working on providing additional resources, including bathroom facilities.

Other cities have taken their own steps: San Jose has halted sweeps of camps and Santa Cruz has set up medical tents for unsheltered people.

Jennifer Ganz, who lives in the encampment along the American River, believes the hand washing stations will make a positive difference. But they won’t stop the spread of coronavirus altogether in this vulnerable community.

She’s hopeful Newsom’s plan to lease hotels materializes, and says she would take the opportunity to get off the streets.

“If they could get some of us out of here, that would be great,” she said.

The state has already leased hotels in Oakland that can house nearly 400 individuals.

The Legislature passed a $500 million spending measure Monday that, in part, will go toward this effort. The emergency funding can be increased up to $1 billion.

Tents along the bike trail near the American River.Scott Rodd / CapRadio
Follow us for more stories like this