Editor’s note: California lawmakers reconvene Monday for their 2020 legislative session. But for the first time in nearly a decade, Capital Public Radio’s Capitol Bureau Chief Ben Adler won’t be joining them. Before he moves into a new role with the station, he digs back into his reporter’s notebook to reflect on California’s polarized political debate. This is the final piece in our California Dream collaboration’s series on solutions.

“It cost double the state budget and didn’t have a funding source attached to it,” Rendon told CapRadio at the time. “It was a bill that was woefully incomplete.”

In reaction, the California Nurses Association posted a violent graphic to social media: a knife with the word RENDON on it, stabbing the California grizzly bear in the back.

“I think it represents very well what the speaker did,” the union’s Don Nielsen said, defending the image. “Yeah, he stabbed California residents in the back.”

Mayes acknowledged the political risk to him and his GOP colleagues as he stood with Brown at a news conference.

“What they decided,” Mayes said, “was that they were gonna put the people of California ahead of their own careers.”

It was more than just a risk. Even though business and oil industry groups preferred cap-and-trade’s market-based approach over top-down state regulations, influential conservatives like Jon Fleischman forced Mayes to resign his leadership post.

“Most hard-working Republican activists expect our legislators to draw a line in the sand,” state GOP strategist Fleischman said in the days that followed that vote. “I don’t work hard to elect Republicans so they can decide that a small tax increase might be better than a big tax increase.”

Just last month, Mayes switched his voter registration from Republican to “no party preference.” He returns to the state Capitol on Monday as the Legislature’s lone independent.

These may seem like extreme examples, easy to dismiss. Or you might accuse me of false equivalency. Yet both are clear examples of the political parties moving away from the center. Away from even talking with the opposing political party, let alone compromising on the hard issues facing our state and our nation.

It’s fair to say California Democrats and Republicans were already deeply divided well before the 2016 presidential election. The state’s $40 billion budget deficit during the Great Recession stemmed in large part from Democrats and Republicans refusing to compromise. But polarization has deepened here in the Trump era, just like it has nationally.

Despite these pressures, some lawmakers still seek connections, compromise… and karaoke.

Once a year, the Legislature’s Cordial Caucus convenes at Simon’s, a legendary political watering hole not far from the state Capitol, for drinks and some below-average singing. When I stopped by in February 2017, shortly after President Trump’s inauguration, Democratic state Sen. Steven Bradford of Gardena told me it makes finding common ground a little easier.

“Events like this allow us to sit down outside of the (political) party, outside the building, outside the politics — and get to know one another,” he said. 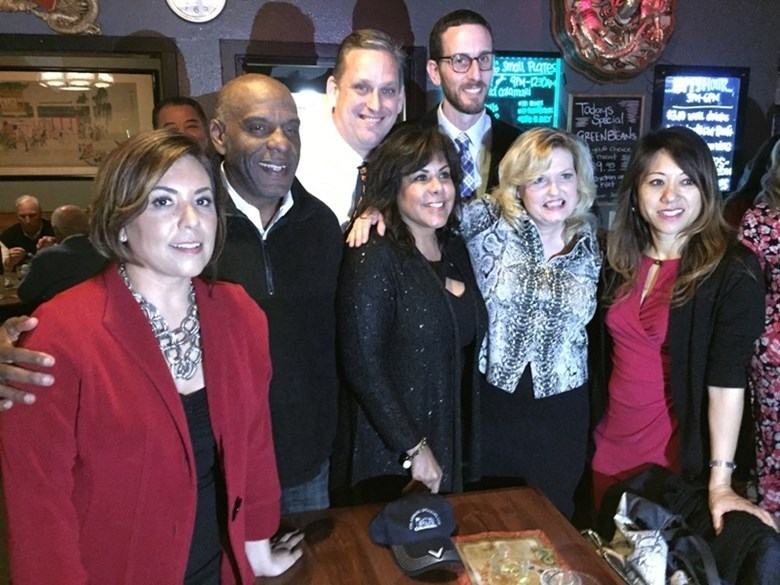 And former GOP Sen. Tony Strickland said politicians do know how to disagree without being disagreeable.

“If you really want civility, you need to hear what the other side’s talking about and have some respect,” he said.

“But your constituents,” I countered, “your active ones, are pressuring you to go further in one direction or the other.”

“Without question,” Strickland replied.” That’s why it’s incumbent upon leaders to lead.”

Sometimes, they do. Earlier this year, Gov. Gavin Newsom and lawmakers from both parties resolved one of the nation’s most polarizing debates... with a compromise.

Assembly Bill 392 raised the legal standard for when police can use deadly force. Its passage came more than a year after Sacramento officers shot Stephon Clark, an unarmed black man, in his grandmother’s backyard.

But it’s not just politicians who must choose between tolerance and tantrums.  It’s the rest of us, too.

On our social media feeds, at our community events, or at our dinner chats with family and friends, it can be hard to find tolerance of the “other side.”

Even, perhaps, from ourselves.

Yet every once in a while, there’s a moment like this one — outside a Trump speech in Reno in August 2017.

“We only met, what, a half-hour ago,“ said Cathy Blane, who opposes the president. “So, so far, really, we’ve talked it out. A little anger at first, a little bit, and now I kind of feel like he’s a friend.”

“Love and respect your neighbor, and understand that some people don’t agree with what you want,“ added Kevin Coffey, the Trump backer. “The use of force is not the answer.”

A few days after the Legislature adjourned for the year this past September, I spoke with a young college grad who’d just spent a year working for a Democratic senator as part of Sacramento State’s Capital Fellows program. Mina Hanin told me he started out viewing politics negatively, because of TV and social media. But he learned that negotiating a bill with opponents often makes the measure stronger.

Asked about working with Republicans, he replied: “There’s the human side of the person, there’s the person themselves, and then there’s their point of view. And productive negotiations and discussions come from the fact you’re negotiating the issue, but you’re not viewing the person negatively.”

In my 20 years as a journalist, I’ve only felt comfortable advocating for two things: Donate to your local public radio station and vote. But as I turn in my reporting gear, I think I’m ready to add one final thing to that list:

Just because you disagree with someone’s political views, it doesn’t make them a bad person.