A Year After The Camp Fire, Locals Are Rebuilding Paradise

On a secluded corner of Marywood Drive in Paradise sit two vacant lots, side by side. The empty space used to hold single-family residences surrounded by Ponderosa pines. That was until the November 2018 Camp Fire — California’s deadliest and most destructive wildfire — leveled the Butte County town and destroyed more than 13,000 homes.

Now, one year later, these lots are being rebuilt by two Paradise natives, Christine and Dave Williams, who bought the properties after the fire.

The pair didn’t lose their own home but are deeply invested in the future of their town, and see these purchases as part of that investment. So far, Dave and Christine have been focused on cleaning the lot by removing dead trees and debris. But they’re planning to build two traditional, single-family homes, reminiscent of what used to be there before the fire, and are already looking at floor plans. 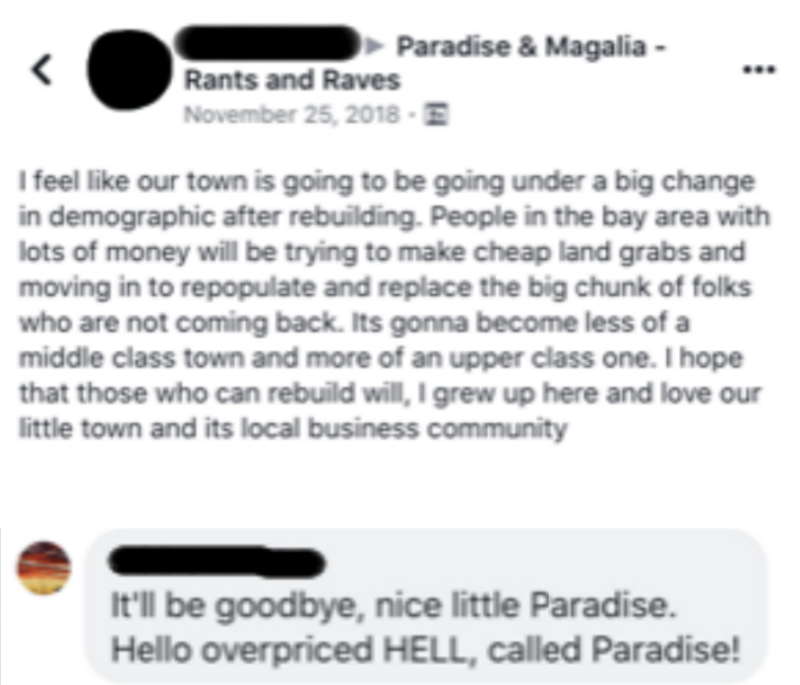 After the fire, residents posted their concerns on Facebook that the town would be bought up by out-of-town developers.

“I just want it the way it used to be,” said Christine Williams. “It’s a beautiful town, a beautiful place to live, a great place to raise families. And we just want to encourage people to come back.”

In the days and weeks after the Camp Fire struck, there were concerns among residents that their town would be bought up by big developers who would rebuild a Paradise not meant for the people who lived there.

But according to a KQED analysis of data from Butte County, including property sales and building permits from the day the fire hit through September 2019, big developers didn’t move in — locals did.

The analysis found that 71% of people who purchased parcels in the town of Paradise had a Butte County mailing address. The majority of purchases were very local: 38% of buyers have an address in Paradise and 25% in nearby Chico.

That’s not how post-wildfire rebuilding typically plays out. Often, large development companies invest in these areas and purchase multiple properties.

After the 2017 Tubbs Fire — which burned about 36,807 acres and destroyed 5,636 structures — out-of-town developers purchased large quantities of real estate in Santa Rosa and the surrounding burn areas.“We’ve seen a big emphasis from builders in the greater Bay Area, and some of those are bigger production homebuilders,” said Doug Solwick, a real estate broker in Santa Rosa. “We’ve seen smaller builders that have people from as far away as L.A. and other states, from as far away as Utah.”

Rebuilding after a fire can be prohibitively expensive and time-consuming — something that survivors of a fire might not be up for.

“We started talking with [Santa Rosa] homeowners, and we realized that 40% of the people don’t actually rebuild — they just choose to sell,” said developer Greg Owen, whose Fairfield-based company Silvermark Luxury Homes purchased around 100 properties in Santa Rosa neighborhoods burned by the Tubbs Fire.

He said his company considered purchasing property in Paradise after the fire, but those infrastructure issues dissuaded him. 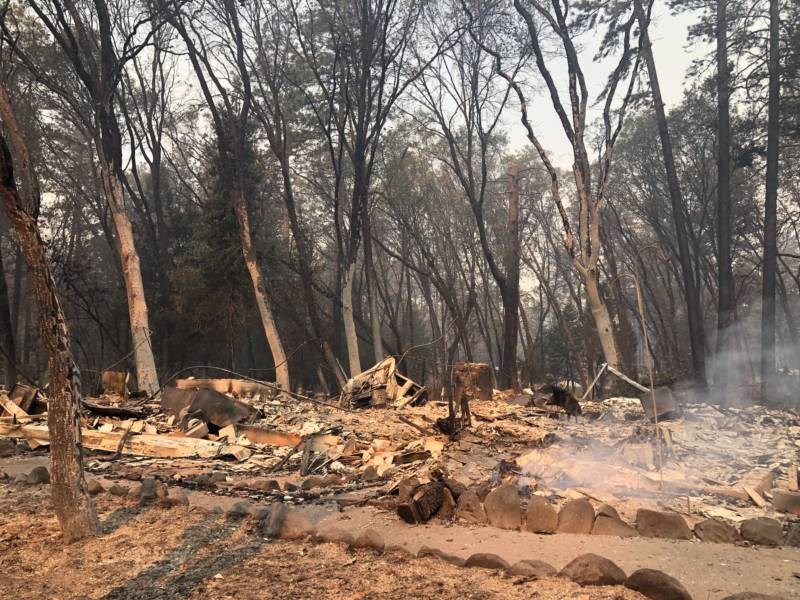 The widespread destruction after the Camp Fire means there's a lot of rebuilding to be done and not enough labor to support it.Sonja Hutson / KQED

“We went up and surveyed it after the fire, and then about three months later, and realized it was unlike Santa Rosa,” explained Owen. “The infrastructure wasn’t there. The hospitals were gone, most of the homes were on septic systems and they also had a problem getting water.”

And it’s not just infrastructure issues that complicate rebuilding. Due to the widespread destruction, Paradise has a lot of rebuilding to be done, and there are not enough construction workers to support it.

Before the Camp Fire, Assistant Town Manager Marc Mattox said Paradise would process 25-35 permits "on a good year." This year, from February through the end of September, Paradise approved 962 permits, according to data obtained from Paradise officials.

Owen said he might consider developing in the Paradise area but not for at least two to three years. That’s in part because, right now, investing in the town seems risky, especially if Paradise doesn’t recover.

But local developers don’t want to wait. They have more confidence that the town will bounce back because they can see it recovering in real time.

Chico-based developer Luigi Balsamo is one of them. He has purchased four parcels in Paradise since the fire, according to data from the county.

“I think people like myself are here with, sort of, your finger on the pulse,” said Balsamo. “There’s a lot of group meetings, town halls and things going on here. But I think it’s also kind of a feeling. ... I believe in Paradise, I want to see it come back.”

But purchasing property in Paradise could also be a good investment: Land values have significantly decreased since the fire hit. In fact, 30% of the properties sold in Paradise after the Camp Fire went for less than their assessed value, according to a KQED analysis. 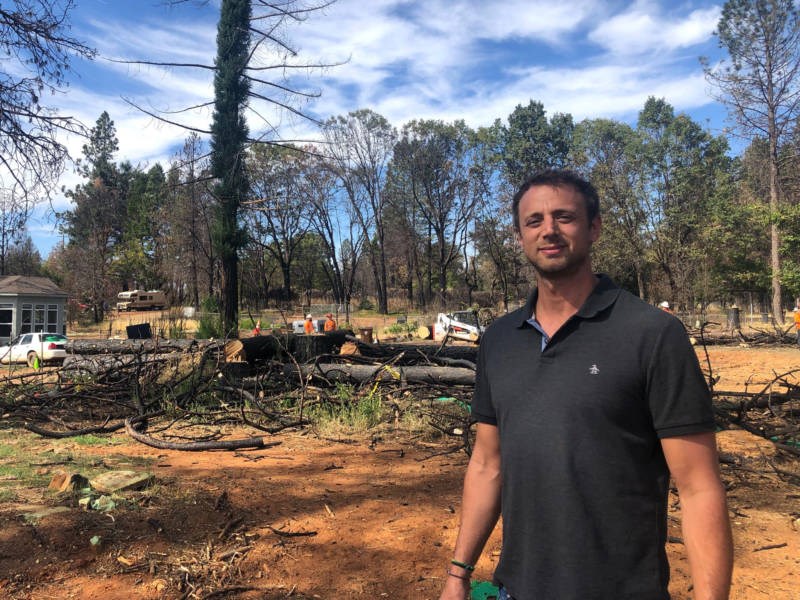 Balsamo said he paid less than the assessed value on 75% of the land he bought, and all of the properties he purchased came from people who moved out of the area after the fire.

But Balsamo argued that low property costs are offset by the high cost of rebuilding in the area.

“What you’re not taking into account is that ... the soil work alone is costs,” Balsamo explained. “The underground work is costing me more than I’m even buying a lot for.”

To offset some of those costs, Balsamo is using prefab manufactured homes, which are cheaper and faster to build.

But there’s always a chance the area could burn again. Almost all of Paradise is designated a very high fire risk zone by Cal Fire, and experts say that one big fire sweeping through doesn’t decrease the likelihood that the area will burn again.

“I think just ecologically, in terms of the equation, there’s vegetation upslope — that’s going to burn. Winds are going to blow, embers will fall onto houses, that will happen again,” said Greg Suba, conservation director at the California Native Plant Society. “What may be true, if we do it correctly, is that the catastrophe doesn’t need to happen again. Houses need to be built out of better, more fire-resistant material.”

And that’s what developers in Paradise are banking on. In 2008, California implemented stricter building codes requiring fire-resistant siding, roofing and window panes to protect the town from further destruction.

Despite all the difficulties facing the town, Dave Williams said the headache is worth it to make sure families return to the area.

“We want to make sure this is a good place for families to be in,” he said. “I’m not saying we’re going to do it for free, but if we can just do it ... I’ll sleep better at night knowing we did our little bit.”

Sacramento County Restaurants Could Reopen With Modifications This Weekend