As Some Millennials Look To Live The 'Van Life,' These Companies Are Filling The Niche For Custom Rides

Earlier this fall, builder Calder Phillips was getting to work on the subfloor, while partner Jenn McAmis looked over some renderings of the final product When the van arrived at their shop this July, Phillips and McAmis mapped out the interior with the client — a whitewater kayaker in need of a home office. The couple expects it’ll take until December to turn the gutted vehicle into a comfortable place to hang.

Many Californians are designing tiny homes on wheels, often with the goal of living, working and playing on the road. Small businesses like this one are popping up to meet the need. 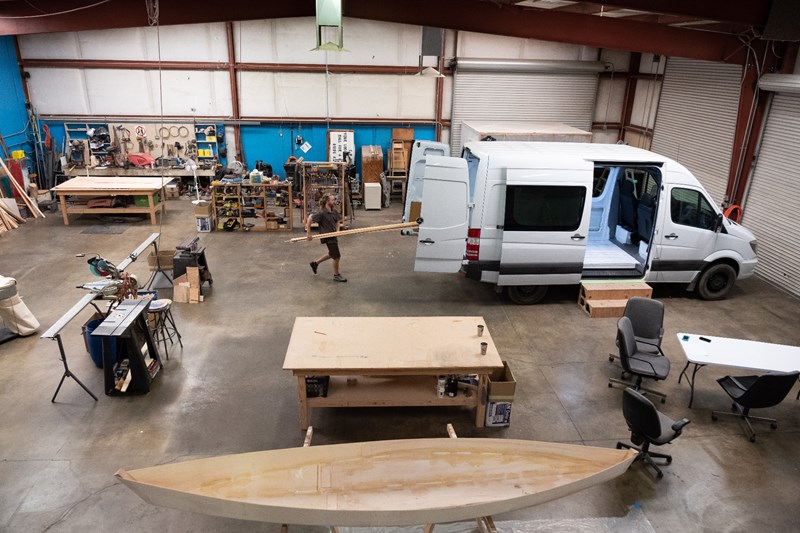 The shop floor at West Coast Adventure Vehicles in Oroville, CA. Van conversion companies are on the rise as more 20-and-30 somethings abandon the dream of a home for a life on the road.Andrew Nixon / CapRadio

“Maybe they’ve sketched on a napkin, maybe they’ve got some pictures from the internet of examples they like,” Phillips said. “Creating someone’s dream out of nothing is very rewarding.”

Phillips says their company, West Coast Adventure Vehicles, has been booked solid since launching last fall. Each van takes months to retrofit, and the job runs customers between $30,000 and $60,000, depending on how much the customer wants to deck out their ride.

Van conversion is a niche market, but experts say it’s already changing the game for the mobile home industry.

Jason McNamara, who runs an online directory of van conversion companies, said there’s been a surge in new businesses, and that he’s added roughly 150 companies to the listing over the past several years.“

"There’s this enormous calling to break away from the 9-to-5, get out of the cities a little bit and push to the outdoor segment,” he said.

Much of the demand comes from “van lifers” — a community of mostly 20-and-30-somethings choosing to live in vehicles who say they want to avoid high rents, reduce their carbon footprint or just see more of the world. They’re buying cargo or passenger vans, often Dodge Rams or Mercedes Sprinters, and turning them into tiny homes.

“In the '70s and '80s, bigger was better,” McNamara said. “With the vans, we’re seeing folks turning in those big RVs and getting into something smaller, more nimble, more fuel efficient.”
While some adventurers try retrofitting their own vans, the electrical and plumbing work push many to seek professional help.

Nickol Arndt, a 30-year-old jeweler and filmmaker based in Bend, Oregon, said she and her husband spent almost a year finding the right builder to outfit their Ford Transit.

“I knew if we hired a company, I’d feel better selling it knowing everything was professionally installed,” she said. “I would’ve been very nervous drilling into my car.”

She said they wanted something more customized than a stock RV. They worked with a builder in Colorado to create special storage for metal and stones, plus extra outlets to charge camera equipment.

“We wanted a personalized van that reflected our lifestyles,” she said. “I wanted it to feel beautiful.”

Phillips and McAmis in Oroville pride themselves on finding creative ways to squeeze someone’s whole life into a standard parking space.

Whether it’s kayak storage under the bed or a dog nook on top of the dresser, there’s a place for everything “in the walls, in the doors, little cubbies that we can build into what otherwise would be relatively unusable space,” Phillips said. 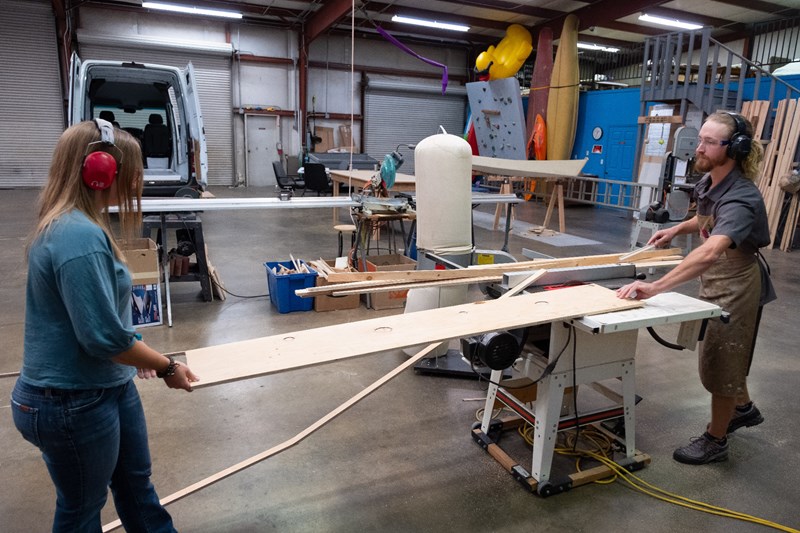 Calder Phillips and Jenn McAmis cut wood for the sub floor of their current van conversion. They've had a waiting list since they opened last fall.Andrew Nixon / CapRadio

They’ve designed vintage kitchen counters and tucked-away instrument storage. And they always make sure to create holding pens for shoes.

He says larger vehicles have more generic storage, but van-lifers are looking for something better suited for their gear.

But recreational vehicle companies say there’s room for all kinds of people and automobiles in the adventure industry.

Kevin Broom, spokesperson for the Recreational Vehicle Industry Association, said the typical age for RV ownership is getting lower each year, and that a growing number of millennials are entering the market.

“All these things people are building and making for themselves are really part of the RV movement,” he said. “We love the enthusiasm of people who are making this a lifestyle.”

RV companies are reporting healthy gains in sales, and attributing much of the growth to smaller units. A recent report from the association shows millennials are also driving sales of after-market parts to accessorize vehicles.

Broom is even banking on some millennials becoming RV owners when they get older.

But for now McNamara, a former van-lifer himself, says young people are looking for something a little more DIY, even if it means getting help from a van conversion startup. He says some companies have up to a two-year waitlist, and even with more entering the market, it’s far from saturated

“There is this extreme demand and quite frankly this shortage of supply,” he said.

McAmis and Phillips say the new business is just breaking even. They’ve got a steady flow of customers, but they’ll need to hire more people and buy new equipment if they want to improve their turnaround time.

They think the van life craze is here to stay, and they’re ready to be at service.

“A lot of people want to go explore and travel, and they want to be able to do that without spending a year building a van first,” McAmis said.