California Raises Standard For When Police Can Use Deadly Force

Nearly a year and a half after Sacramento police shot and killed Stephon Clark, an unarmed black man, Gov. Gavin Newsom signed a bill Monday that raises the legal standard for when police can use deadly force.

“As California goes, so goes the rest of the United States of America, and we are doing something today that stretches the boundaries of possibility and sends a message to people all across this country that they can do more and they can do better to meet this moment in their respective states,” Newsom said.

The measure, AB 392 by Asm. Shirley Weber (D-San Diego), would change the use of force standard from “reasonable” to “necessary.”

“This [bill] basically changes the culture of policing in California,” Weber said.

Weber called out many of her fellow lawmakers for championing the bill, and Newsom in particular, saying that she did not think the bill would have been signed if he were not the governor.

California Police Chiefs Association President Ronald Lawrence said that this bill, coupled with another that would create new training standards, presents California as one of the “leaders in the nation” with a comprehensive use of force law package. But he said there needs to be another discussion, away from the Capitol, about how to rebuild trust between police and communities.

“As a society, that’s what’s gonna make California and the nation better,” he said. “People need to trust their police, and police need to understand our communities, and we need to police our communities to the best ability of the expectation of our cities.”

Lawrence said there’s a persistent perception that officers can easily de-escalate a threat, but in reality, officers face dangerous situations where they have to make split-second decisions.

“An officer who’s in that fight-or-flight mode is working to save their life or the life of somebody else. And the objective is to stop the threat, to make sure they’re not killed or somebody else isn’t killed. So I think that this certainly raises the standard,” he said.

Sacramento Mayor Darrell Steinberg spoke at the signing about the “great trauma” the city suffered when Stephon Clark was shot and killed in 2018. He said that AB 392 is a “watershed achievement” that would help heal wounds like these.

“No one law will fix all the challenges facing our law enforcement communities and our communities of color,” Steinberg said. “But I am confident that AB 392 will by definition save lives.”

Many of Clark’s family members, including his brother Stevante Clark, his mother SeQuette Clark and his grandmother Sequita Thompson, were there and flanked Newsom as he signed the bill into law.

Stevante Clark said he thinks there is a lot more work to do, but the law is a good start.

“I call this the Stephon Clark law,” he said. “I don’t think this law would be here and as powerful as it is now if it wasn't for my brother.”

Community activist Berry Accius said despite the hard work to get the bill passed, he’s skeptical about its impact.

“Is it really going to be an action bill? A bill that makes sense? A bill that will actually hold these officers accountable? That's my frustration, because we have seen policies be put in place that have not worked for the people's best interests,” he said.

Accius said the community needs to see convictions, firings and other consequences for officers that aren’t done behind closed doors. 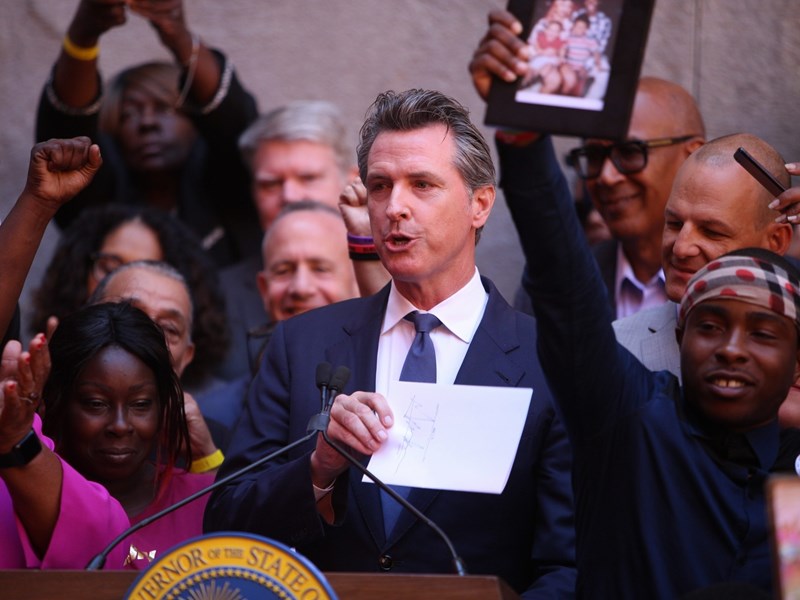 Gov. Gavin Newsom holds up a signed AB 392 next to Stevante Clark, right, holding up a photo of his brother and his family.Andrew Nixon / Capital Public Radio

A New Standard: What’s In The Final Deal

In many ways, the entire debate over when police can use deadly force boils down to two words — necessary and reasonable — and how they’re defined.

Right now, deadly force is justified if a “reasonable” officer would have acted similarly in that situation. In other words: what a typical officer would do based on his or her training.

When the new law takes effect in January, that standard will change — to when the officer reasonably believes deadly force is necessary. However, the bill leaves interpretation of how to actually define “necessary” up to the legal system to figure out on a case-by-case basis.

There are other compromises as well.

The officer’s conduct leading up to the shooting will be considered — but so too will the suspect’s behavior.

And the measure says police “shall” use other alternatives, such as de-escalation or less lethal options, before using deadly force. Although these requirements are guidelines, not a specific checklist.

Finally, there’s a separate bill still moving through the Legislature that creates new training standards for officers, and money in the state’s new budget to pay for that training.

From Shooting To Signing: How A Controversial Bill Became A Compromise Law

Stephon Clark was killed by Sacramento police in his grandmother’s backyard in March of last year. Officers said they thought Clark had a gun; in fact, he was holding a cell phone.

Then, this past March, the Sacramento County district attorney and the California attorney general each decided not to charge the officers who shot Clark.

Clark’s death and the lack of charges for the officers both led to protests in the streets, and one of the things the protesters demanded was a new use of force standard.

Weber’s legislation first emerged soon after the March 2018 shooting, but it stalled months later when lawmakers adjourned for the year.

The two sides were far apart. Community activists and civil liberties groups said only a “necessary” standard would force officers to change their behavior. Law enforcement said that would put officers’ lives in danger.

Senate President pro Tem Toni Atkins (D-San Diego) ordered the two sides to spend the next several months negotiating. Talks broke down several times, but once it became clear that neither community groups nor law enforcement had the votes in the Legislature to get their way, they finally reached a deal.

In a CapRadio interview last week, Atkins credited both sides for “not walking away from the table.”

“Use of force is such a critical issue in this country,” she said, adding that it was crucial “not to give up the conversation, because it has real impact on people’s lives.”

“When you have true leadership, that really polarized positions can come together,” Lackey said. “What looks to be unnegotiable can be negotiable.”

But Monday’s bill signing was not entirely a “Kumbaya” moment. The bill’s backers did not invite law enforcement groups to the signing ceremony — perhaps a sign that emotions are still just a little too raw.