Even after the deadly Camp and Carr Fires roared through parts of two Northern California communities last year, some counties have yet to sign up to be able to access a federal notification system that could help them save lives.

The Wireless Emergency Alert system allows a city or county to send an alert to every cell tower in a certain area.

California Governor’s Office of Emergency Services says access to the system should be a part of any notification strategy.

"WEA is not the magic pill, but it certainly is a really important one," said Caroline Thomas Jacobs with CalOES.

If a fire, flood, earthquake or other incident that requires notifying of a large number of people were to happen in California, 88 cities and counties have the ability to use the WEA system.

But Amador, Colusa and Kings counties haven't signed up. Modoc County plans to use a neighboring county’s WEA access, much like how Alpine County uses Douglas County in Nevada. And Kern and Sutter counties have applied, but have not been approved. 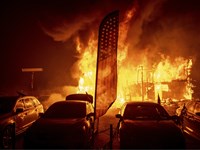 Many Residents Did Not Receive Emergency Alerts During The Camp Fire. Will You Be Warned If A Disaster Is Heading Your Way?

Back in January, Amador County’s Office of Emergency Services said it would take only a few months to apply. This week, Sgt. John Silva says the agency still hasn't.

"It'll either be late this week or the first part of next week, and then we'll jump through whatever hoops FEMA has us jump through," Silva said.

Sutter and Kern counties have submitted paperwork to gain access to the system, as have 25 other counties, cities and military bases. But CalOES says access isn’t enough. Training is also necessary; Thomas Jacobs says workers need to know how to use the technology and tools.

“It also helps the community get used to and receive those alerts, so that they can confirm that their phones are configured properly," she said.

In March, Cal OES issued a list of emergency-alert guidelines for cities and counties. Signing up for WEA was on the list.

Colusa County says it is has not submitted an application because it's waiting for FEMA to review it.

Kings County says it has completed FEMA training, but still needs approval from its board of supervisors before it can submit an application. Modoc County is in the process of partnering with Lassen County to issue notifications.