A contentious decision to allow uniformed law-enforcement officers to march in this year’s Sacramento Pride parade sparked a protest on Sunday that blocked attendees from entering the annual festival — and generated debate over how to impact change within the LGBTQ community.

Former Sacramento resident Jocelyn MacDonald says she was hoping to check out Pride, but when she made it to the entrance near Capitol Mall it was surrounded by demonstrators. The group stood with arms linked and held signs that read “No Cops at Pride” and “Black Trans Lives Matter.”

“I consider myself to have been an ally of the LGBTQ-Plus community going back about 30 years,” MacDonald said. “This is just creating more divisiveness, which I don’t think we need any more of in this country.”

More than 200 demonstrators were able to block three entrances to the festival grounds for more than an hour. Thousands were delayed in getting inside — but not all of them were frustrated by the protest.

And this will give you an idea of the turnout at today’s demonstration, which for a a good while blocked people from entering the #sacpride2019 festival. There were people blocking other entrances, as well. pic.twitter.com/COR3hFIXua

A transgender attendee (who for safety reasons only gave the first name Madeline) expressed support for the demonstrators. “Pride is supposed to be a protest, not a party,” they said.

Bob Hearn from Sacramento says it was great to see the people exercise their First Amendment rights, but questioned the approach. “I think that’s really positive and we need to give a voice to everybody,” Hearn said. “It’s unfortunate that they’re blocking the entrance. I don’t think it helps their cause.”

Some attendees were unclear about why people were blocking the entrance, including Charles Lininger of Sacramento, who thought the demonstrators were taking action “against gay people and liberation.”

“That’s what I understand,” Lininger said.

The LGBT Community Center, which puts on Pride, announced in May it would not allow officers in uniform to participate in Sunday’s parade. But last Thursday, its board reversed that decision, saying it had reached an agreement with the Sacramento Police Department, which was mediated by Councilmember Steven Hansen.

Some demonstrators say the decision to protest came after more than a dozen staffers at the Center wrote a letter criticizing its board, calling for a boycott of Sunday’s event and its president’s resignation.

But other activists, such as Mia Dawson, who helped organize Sunday’s demonstration, say they'd been planning the action for months, as part of celebrating the 50th anniversary of the Stonewall riots, and to protest the LGBT Center.

“My goal is queer liberation, and that requires the dismantling of the military police state,” Dawson said. “One action doesn’t do that, but this is part of a larger movement that’s working toward those things.”

The protest brought together a variety of groups, including Sacramento for Black Lives, staffers with the LGBT Community Center, the Still Here movement and Antifa, among others.

Ayotunde Ikuku, who also helped organize the protest, said the mission was to bring awareness to police violence and harassment against black, LGBT and queer residents.

“Today, our goal is to be felt and to be heard and to be seen,” Ikuku said, adding that the coalition opposes what many demonstrators called the corporate influence or “rainbow capitalism” that helps pay for the Pride festival.

“Money is not going to control what we do, we’re not in it for the money,” Ikuku said.

The Center’s president, Carlos Marquez, told CapRadio last week that his group “should have done and absolutely can do better to try to find ways to engage our staff around key decisions that will ultimately impact the organization.” 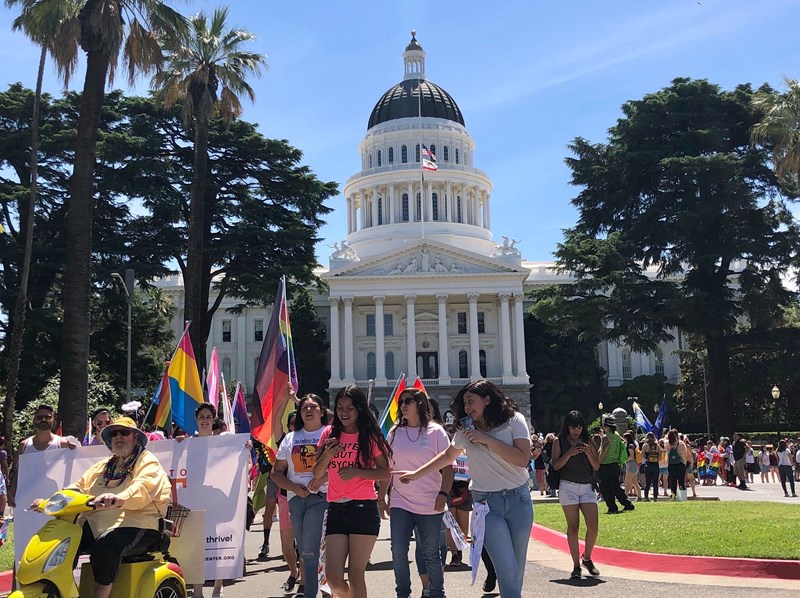 Before the festival, marchers in the parade gathered at Southside Park, where Police Chief Daniel Hahn joined his officers in support.

“That uniform needs to stand for something. And for some people it stands for negative things, and our goal is to change that,” Hahn said.

The department has said it will do more outreach with the LGBTQ community and offer more officer training with input from the LGBT Center.

Sacramento officer Michele Gigante was one of at least a dozen officers who marched. “This is really a huge event for me as an out, lesbian officer,” Gigante said. “This is just a fantastic day and I’m so happy that we’re able to march in uniform.”

Stacia Tate, a West Sacramento resident who walked in the parade on Sunday, says she supports black and trans lives, but also the role of police in the event.

“I feel like having the uniform here would show the solidarity and start the healing,” Tate said. “They are people first, officers are their job. And they need to be seen as helping, not hurting.”

Some local LGBTQ groups scheduled to have booths decided to boycott  Pride and organize their own events this weekend.

The Lavender Library in Midtown hosted a free gathering with face-painting, LGTBQ history presentations and music. Erin Mahoney, who sits on the Library’s board, was frustrated by people who say opposing uniformed police goes against the inclusive spirit of Pride.

“There was no exclusion. Officers were allowed. They just weren’t invited in their uniform,” Mahoney said. “And that uniform represents something to a lot of people in our community who have been victimized by police.”

At the Pride event, festival-goers grew frustrated by the protest, and some attendees rushed the entrance gates, breaking through the line of demonstrators and pulling down fencing to get inside.

Eventually, organizers created other points of entry and nearly all attendees made it inside — with most people being allowed in for free.

Lizzo, the festival’s headlining performer who even demonstrators said they would have been excited to see, spoke to the crowd during her set about the protest.

A spokesperson with the Sacramento Police Department said there were no arrests due to the demonstration.

This story has been updated to include more details about the demonstrator's goals.