There are over 6,000 vacant lots in the city of Sacramento, according to city records, but Oak Park residents say one at the intersection of Martin Luther King Jr. Boulevard and 12th Avenue was a prominent eyesore.

A nearby resident says, until recently, it was just an abandoned lot covered in dead grass.

Erin Huff, a realtor who lives on the south side of the intersection, says commuters get off the freeway and drive right past it. “It’s like the center of the neighborhood,” she said.

Homeless people would sometimes sleep in the lot, and people also used it as a place to dump trash, Huff said.

But Oak Park residents and staff with Alchemist CDC, a local nonprofit that works on a variety of projects that aim to improve food access, recently started transforming the lot into a local gathering place with perennial and edible plants and art created by neighbors.

When the lot came up for sale a couple of years ago, Huff imagined an urban farm: a place to grow fruit, vegetables and herbs for nearby residents, many of whom lack access to healthful food, she said.

"I don't really know that I have the time to be a farmer," Huff recalled thinking.

So, she decided to buy it.

Soon after, she connected with Randy Stannard, project manager at Alchemist CDC. When he’s not working at the nonprofit, Stannard’s planting, weeding and harvesting produce at Root 64, a farm in the Tallac Village neighborhood that’s run by his partner, Sarah McCamman.

He says Oak Park residents shared a variety of thoughts on improvements for their neighborhood, including more vocational training, jobs, an art center and “places for kids to go,” he said.

"We had the highest percentage of people just said, we just really enjoy and like it as a green space. Just make it really beautiful and make it thrive.”

Many residents reported a need for healthy food options and access, Stannard said.

So far, he and volunteers have planted more than a dozen fruit trees, including pluot, peach, apricot, orange, lemon and fig. Murals of plants and flowers now decorate the lot’s fence. There's a tree sculpture made from wire and a painting of Michelle Obama, with the word “effort” written in huge letters along one side. 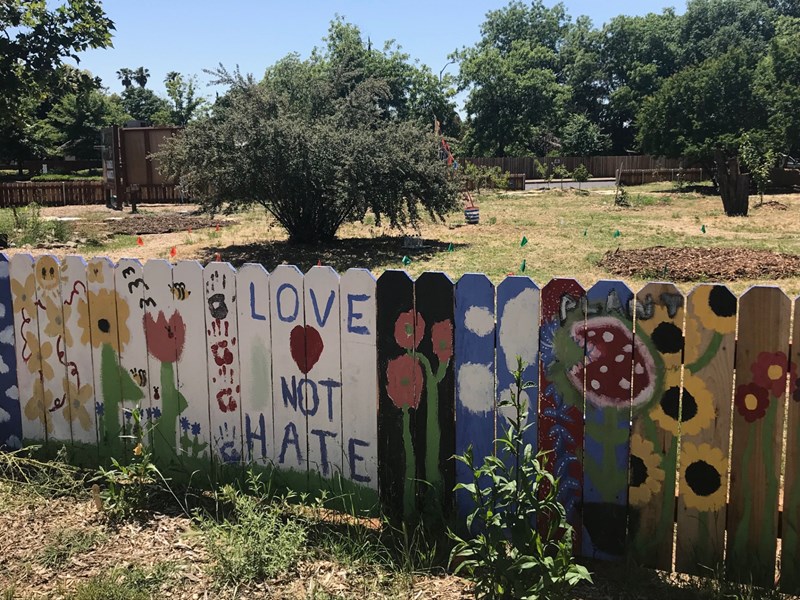 The Oak Park Art Garden is a formerly vacant lot at the corner of Martin Luther King, Jr. Boulevard and 12th Avenue in the Oak Park neighborhood of Sacramento.Julia Mitric / Capital Public Radio

The lot is not currently connected to the city water line. Stannard says it could take $20,000 to get that work done. For now, he’s running a hose to a neighbor’s line, and Alchemist is paying the difference in the city water bill, he said.

As nearby residents see the lot changing, Stannard says local momentum is building.

“It’s a unique opportunity for people to be able to contribute in a way that works for them,” he said. “We’re just inviting everybody to come out and just be in the space. How can we say ‘yes’ and do something together?”