Forty years after it began broadcasting from the Sacramento State campus, CapRadio announced on Tuesday a $10 million plan to relocate its headquarters to the heart of downtown, just blocks from the Capitol and the Golden 1 Center.

According to the station’s leadership team, the 34,000-square-foot building will host all of CapRadio’s employees, with the space to eventually double the staff’s size to 140 employees.

It will also be a place for the community to gather, featuring modern glass doors that fold open to the street and invite the public into a spacious lobby.

Passersby on the sidewalk also will be able to see inside CapRadio’s studios. A new theater and community space will host hundreds of events each year, and digital signs extending the length of the building will share the day’s headlines. 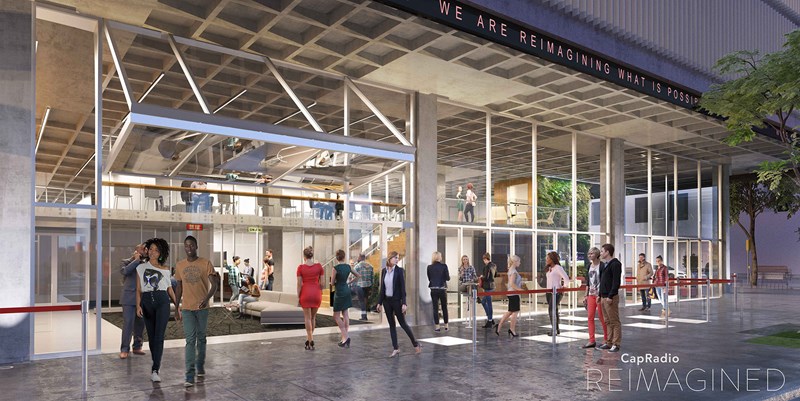 A rendering of the outside of CapRadio's future downtown headquarters.

“With our move, we will add to the vitality and economic health of downtown Sacramento and we will be able to expand on our mission,” said Rick Eytcheson, CapRadio’s general manager.

CapRadio also announced on Tuesday that it is partnering with Sutter Health — the Sacramento-based, nonprofit health system that operates several regional hospitals — on a new community engagement center and theater, also be located at the new downtown building.

Sutter Health is donating $2.25 million to CapRadio to help construct the center and acquire its naming rights, according to Eytcheson. The facility, which could seat up to 220 guests, will host performances, live radio events and musical concerts.

“We are proud to invest in this landmark project and provide the community with greater access to education, collaboration and community empowerment — important facets of a healthy community,” Sutter Health President and CEO Sarah Krevans wrote in a statement. 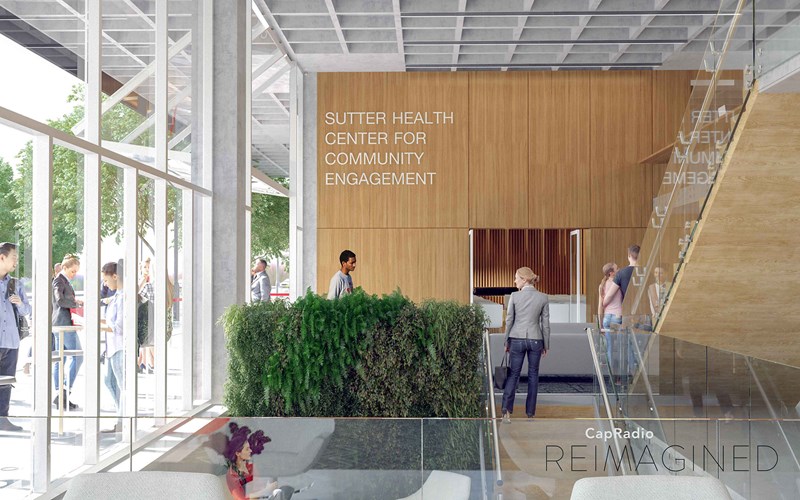 CapRadio and Sutter Health hosted an event on Tuesday morning announcing the partnership. Mayor Darrell Steinberg, Councilman Steve Hansen and California Lt. Gov. Eleni Kounalakis all praised their efforts during a ceremony that also revealed artist renderings of the new station and center.

“This represents the broad definition of community and public health,” Steinberg said. “To be able to host 300 events a year, to be able to expand its repertoire and its number of reporters and issues it is able to cover is a big deal.”

In 1979, CapRadio debuted on the Sac State campus, which it has called home for much of the past four decades. But the station’s leadership team says its membership base and staff has grown rapidly in recent years, which meant that it needed to expand its office space.

According to Reina, CapRadio began exploring the possibility of a move two years ago. At that time, the station launched a “capital campaign” with the specific goal of raising $10 million for the relocation.

Eytcheson says that, so far, it is “just over half way” toward meeting that goal.

Monthly and regular donations from current and future members will continue to support CapRadio, not the move and remodeling of the building, according to Reina. The executive team also explained that Sutter Health will host events at its new community-engagement center, but will not have any influence on CapRadio’s newsroom decisions.

Sac State will continue to license CapRadio, as it has done since its inception.

The station’s leadership team anticipates construction to begin on the new building later this summer, with a goal to move employees and debut the community-engagement center in mid-to-late 2020.

Correction: A previous version of this story misstated how long CapRadio has broadcasted from the Sacramento State campus. The station has at times been located off campus.