You can look at Ginger Rutland’s delightful (and very personal) new play "When We Were Colored" both in how its written and how it’s being staged in its premier production by the Sacramento Theatre Company.

Rutland is a veteran writer and journalist who grew up and attended school in Sacramento. The play is adapted from a memoir written by her late mother Eva, and the script is a loving portrait of Rutland’s parents. (Hear Eva and Ginger Rutland discuss the memoir on Insight and Eva Rutland discuss her life on NPR's Day to Day, both recorded in 2007).

One can look at the new play in the broad context of the growing (and valuable) canon of African American plays, including classics such as Lorraine Hansberry’s “A Raisin in the Sun” and August Wilson’s panoramic 10-play cycle, set in Pittsburgh over the course of 10 decades. These were plays primarily focusing on families with limited financial resources, dealing with frequently discriminatory and oppressive circumstances.

Rutland has a different tale to tell. Her parents were by-and-large upper middle class and well-educated. Her father Bill hailed from Detroit, a city that became the home of many black families who moved north during the Great Migration. And her mother Eva hailed from Atlanta, where Martin Luther King, Jr. was born and rose to prominence — a city that was at once segregated, but also offered a pretty comfortable life to black families of financial means.

The play tracks this long-lived, happily-married couple over decades: their initial meeting and courtship in Birmingham, Alabama prior the Civil Rights Movement; their marriage; Bill’s military service during WWII; his advancing career after the war working on in government-related defense contracts; and their eventual move to accept a promotion in Sacramento, a city that was both unfamiliar and a bit scary for Eva as a daughter of the South.

They initially rent a house in Sacramento, with difficulty. They save their money and eventually buy a home, doing an end-run around discriminatory real estate practices that were common in this region in the 1950s by having a white friend initially buy the house and then sell it on to them. They deal with public school teachers who want to put their children in what is basically a slow-learner class, primarily populated by black or Latino students based on skin color alone. And Bill in particular deals with the periodic incidents in which he participates in a business luncheon, and his white colleagues are handed a menu, but he is told he cannot be served.

“When We Were Colored” is basically an affectionate love letter from the playwright to her parents, viewing them with sympathy even when they disagreed with their daughter, like the 1960s episode in which the college-age Rutland returns from her studies at Howard University with her mind filled with visions of societal revolution, which are somewhat at odds with her parents’ somewhat older and more conventional ideas. The play also references the couple’s later years, as mother Eva goes blind, and father Bill passes away.

It’s a by-and-large happy saga, about a black family that hung in there through adversity, with a husband and wife who stayed together for the duration, and kids (and grandkids) that turned out pretty well. It's a contrast to the more poverty-and-crisis oriented themes of many other black American plays, something Rutland herself says was a motivation for writing the play.

You can also look how this story is told specifically in this premiere production at the Sacramento Theatre Company. Veteran director Stephen Eich is a solid “old pro,” associated for many years with great regional theaters around the country such as Steppenwolf Theatre in Chicago and the Geffen Theatre in Los Angeles. He provides a steady hand on the tiller throughout this voyage.

Professional actors Michael Asberry (who’s been excellent in several Sacramento Theatre Company productions) and Nathalie Autumn Bennett play parents Bill and Eva, with another professional actress, Brooklyn Solomon, playing daughter Ginger at various periods in adult life. At the performance I attended, young Abisola Forrester played Ginger (and Ginger’s daughter, also named Eva in honor of her grandmother). That role is also played at some performances by Lauren Taylor-Piazza. Rounding out the cast in a variety of cameos are white actors Elizabeth Ann Springer and Steven Ross Thomas. They all do well. 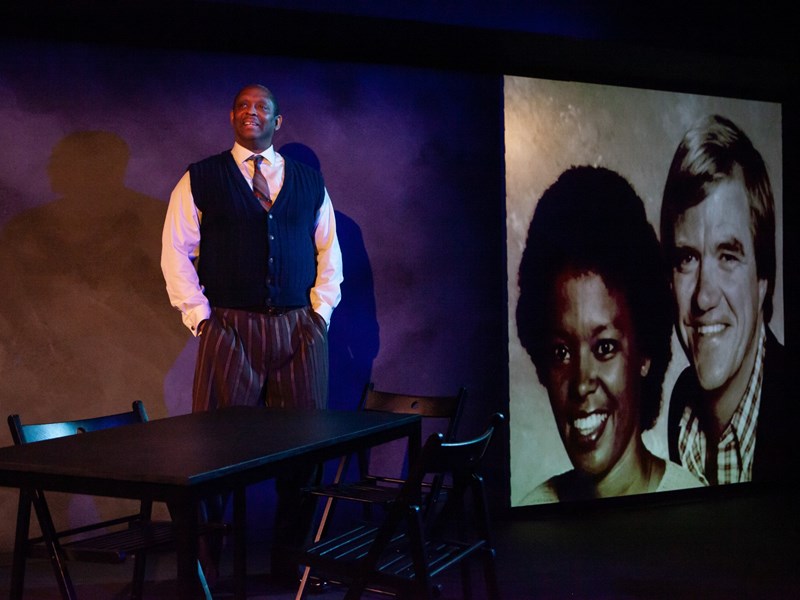 Michael J. Asberry in the Sacramento Theatre Company's production of "When We Were Colored"Charr Crail Photography

The staging is spare, just a few props. The sound design leans toward music from the 1940s and 1950s by black artists.

The visuals include projections of many delightful family photos showing the Rutland family as Eva and Bill’s children grew from toddlers to teens to adults. The audience at the performance I attended — including quite a few who knew Eva Rutland — responded warmly, and understandably so. And the Sacramento setting, including pictures of local department stores and drug stores from the 1950s that have long-since disappeared, chimed with the audience.

This is very much an affirmative show about a dedicated and resilient family that hung in there through changing times and not only survived, but thrived. This being the first professional production of this script, playwright Rutland will very likely revisit the piece and make a few tweaks. The first 20 minutes or so could probably use a bit more tuning up.

But this really is a lovely show, relating a story that is not often told about a black couple that moved west to California (and not the usual destinations like Los Angeles or the Bay Area) and went on to enjoy happy and productive lives as parents who also sustained successful professional careers. If living through life’s multiple adversities turned out this well for more of us, the world would be a better place. Keep hope alive.

The Sacramento Theatre Company’s production “When We Were Colored” plays through April 28.