Sacramento Plans To Build A New Bike Trail Near Land Park. But At Least One Group Is Opposing.

The city of Sacramento wants to build five new miles of bike trail, which would connect Land Park to an existing path in south Sacramento. But at least one group is opposing the plan, because it would require what they call historic railroad track to be removed.

The proposed Del Rio Trail would cut across Sutterville Road just south of the Sacramento Zoo, including railroad tracks currently used by the California Train Museum’s excursion train. The Sacramento Rails Preservation Group argues that extending museum's train route would be impossible if tracks are removed to create the bike trail.

Gregg Lukenbill, a member of the group and local preservationist, argued that the historical significance of the tracks outweigh the need for a new trail.

"It doesn't do much for what I would call passing on the passion of an Abraham Lincoln, who created Yosemite, the first real park in the country," he told CapRadio. 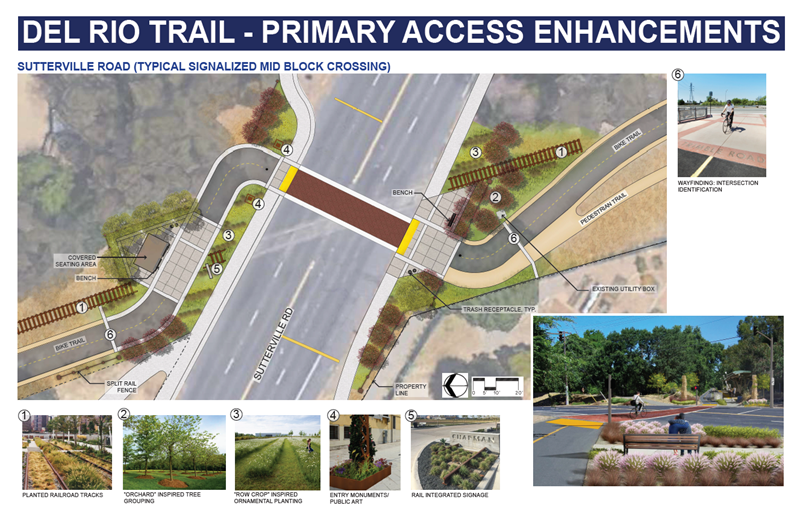 A rendering of the proposed Del Rio bike trail.
City of Sacramento / Courtesy

“This area is in dire need of multi-use, off-street trails,” he said.

He added that the old rail bridge currently sits burned and is not operating. "The tracks are not usable now,” Gothan said., “So the idea that we're somehow  impacting an existing line, I don't buy."

Gothan says there have been no approved plans to extend the railroad excursion line farther south, but there is a plan to connect Old Sacramento with the zoo, which he believes works well with the bike trail.

"The trail project doesn't at all impede those plans. In fact, I think it complements the plan and the excursion route," he said.

The trail would eliminate some of the need of cyclists and pedestrians to use heavily-traveled streets, according to Gothan.

City Council is scheduled to vote on the bike trail on Tuesday.