These Donors Gave Nearly $8 Million At Gavin Newsom’s Request. He Gave Them Access At His Inaugural Events.

The day before Gavin Newsom was sworn in as California’s 40th governor earlier this year, he held a private lunch for major donors at Sacramento’s Crocker Art Museum.

Then, he headed over to the California Railroad Museum for a family-friendly event his transition team called “Kid-chella,” which featured robotics and slime. Donors received “sponsor tickets” as well as extra “general” admission tickets.

And on his final night as governor-elect, Newsom hosted a benefit concert for California wildfire victims at Sacramento’s Golden 1 Center, the city’s posh new downtown arena, which he said raised nearly $5 million.

“And that’s after expenses," he said that evening. "I know how to do budgets.”

In addition to their logos gracing the stage where artists including Pitbull, Common and X Ambassadors performed, donors received tickets to a private “sponsor reception” that included food and beverage, plus “preferred floor seats” or general admission tickets.

The next morning, when he took the oath of office, donors received tickets to the ceremony. And when bad weather rolled in, his advance team even set up extra seats at the last minute so more donors could be seated in the only viewing area with a direct line of sight to the stage.

Newsom offered this access in exchange for nearly $8 million in donations to his inaugural committee and a charitable fund that donated proceeds from the concert to wildfire relief. They’re known as “behested contributions,” and they’re entirely legal.

But the donations raise questions of conflicts of interest, and highlight a political system that gives wealthy contributors extra opportunities to hobnob with the politicians they hope to influence. 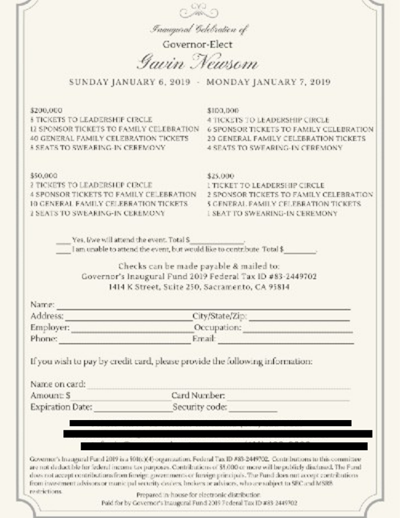 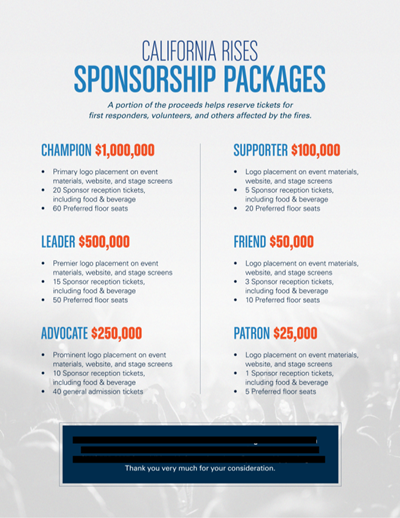 Click each of these images to see examples of the governor's offers for behested contributions.
Capital Public Radio

“What we’re worried about,” said Loyola Law School Professor Jessica Levinson, an expert in political ethics, “is either actual corruption or the appearance of corruption.”

To get this access, donors’ “behested contributions” went to two different funds of Newsom’s choosing. Some donors contributed to both funds.

In total, Newsom raised $7.8 million in behested contributions from 134 different donors to celebrate his inauguration and help wildfire victims, according to data from the California Fair Political Practices Commission. They ranged from $2,500 to $1 million.

Newsom’s political spokesman, Dan Newman, declined to comment directly about the behested contributions to the inaugural committee, but said the governor was “proud to raise millions for victims of the devastating fires.”

Levinson said the point of a behested contribution is to either “buy access or good favor.”

“We have defined corruption very narrowly, so we say that it is permissible to create a system where people who can make big behested contributions can obtain a different level of access, and therefore a potentially different level of influence,” she said.

California, however, requires full public disclosure of those donations. And because the public can see which businesses, unions and individuals are making behested contributions and how much they’re donating, Levinson said, “it can actually deter bad behavior.”

“Because if everybody knows we’re gonna have to disclose this particular donation, then they might think twice before potentially corrupt action,” she added.

In this case, the contributions to the inaugural committee came from a variety of sources, including:

Donors can behest money in unlimited amounts, and the biggest donation to the wildfire concert was $1 million from Salesforce. Sutter Health, Planned Parenthood Affiliates of California and the building trades union made large donations as well. Even the San Francisco Giants chipped in $50,000.

Carroll Wills, a spokesman for the California Fire Foundation, said it received $6.2 million in pledges, of which roughly $5.7 million in donations have been collected so far. The nearly $4 million in behested contributions make up about 65 percent of the pledged donations. The rest came from individual donations and sales of approximately 3,500 concert tickets priced at $25 each.

“It is our intent to provide long-term recovery grants covering major fires in 2017 and 2018,” Wills said. Although the foundation’s mission is to provide “emotional and financial assistance” to families of fallen firefighters, Wills said the money raised by the concert will all “be directed to communities affected by these fires. None of these funds will be directed to firefighters and their families.”

Behested contributions are just one of many ways to “spend more money and make politicians happy that go beyond contribution limits,” Levinson said, such as independent expenditure campaigns, ballot measure committees and legal defense funds.

And Newsom is far from the first California politician to solicit behested donations.

In 2018 alone, then-Gov. Jerry Brown raised more than $10 million in behested contributions — mostly for his Global Climate Action Summit last fall but also for two charter schools he founded while mayor of Oakland.

U.S. Senator Kamala Harris, a Democratic presidential candidate, arranged for nearly $2 million in behested donations since 2011 while she was California Attorney General. Because the state does not track behested contributions for federal office holders, the data ends after 2016 when Harris moved to the Senate.