No charges will be filed against the 84 people arrested by Sacramento police at a Stephon Clark demonstration in East Sacramento Monday night.

District Attorney Anne Marie Schubert announced the decision Friday, writing "In the interest of justice, no charges will be filed in any of the cases submitted."

Sacramento police officers detained and arrested 84 people at the march, including clergy and two journalists. The demonstrators were marching through the neighborhood to protest Schubert’s decision not to charge the officers who shot and killed Clark last year.

Police say they made the arrests after a property owner reported that cars in the area had been keyed. Police spokesperson Sgt. Vance Chandler said on Monday night that the officers gave 10 orders to disperse due to unlawful assembly over a two-hour period. In a statement Friday, the department said 30 dispersal orders were given over an hour and 40 minutes. 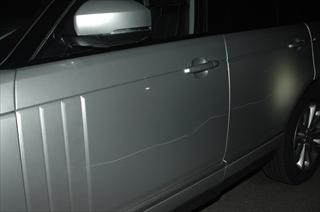 Sacramento police say multiple vehicles, including the one pictured, were vandalized during Monday's protest in East Sacramento that resulted in 84 arrests.Sacramento Police Department / Courtesy

The police statement says that at first "protestors marched in the street peacefully." But that it changed when the "group of protestors blocked access to a hospital in the area."

"A verbal confrontation with a homeowner took place followed by a heated argument and assault,” the statement reads. “A protestor was observed walking and holding an unknown object that was on fire. Our helicopter captured video footage of this subject."

Activists have demanded that the charges be dropped since the incident, including at Tuesday's City Council meeting.

"We want the people who were arrested last night to have all of the charges dropped because that was completely unacceptable," Dr. Flojaune Cofer, a leader with The Table Sacramento, which organized the march, said at the meeting.

Mayor Darrell Steinberg in a statement on Twitter said the DA's decision not to file charges was "the right thing to do."

Steinberg and the Sacramento City Council have called on the City Office of Public Safety Accountability to investigate the arrests.

“I’m very concerned and troubled by what happened on Monday night,” Steinberg told Insight with Beth Ruyak on Wednesday. “Those demonstrators were out there to have their voices heard. As far as I could tell, it was a peaceful protest.”