It was Saturday afternoon at the Hyatt Regency in downtown Sacramento, and the three candidates for California Republican Party chair got this question on the debate stage:

“What do you think is the greatest success of the California Republican Party and how do you improve on it?” asked the moderator, Ventura Party Chair Mike Osborn.

A night earlier, the party had honored its former chairpersons during a dinner celebration — and 10 men stood on stage, nine of them white. 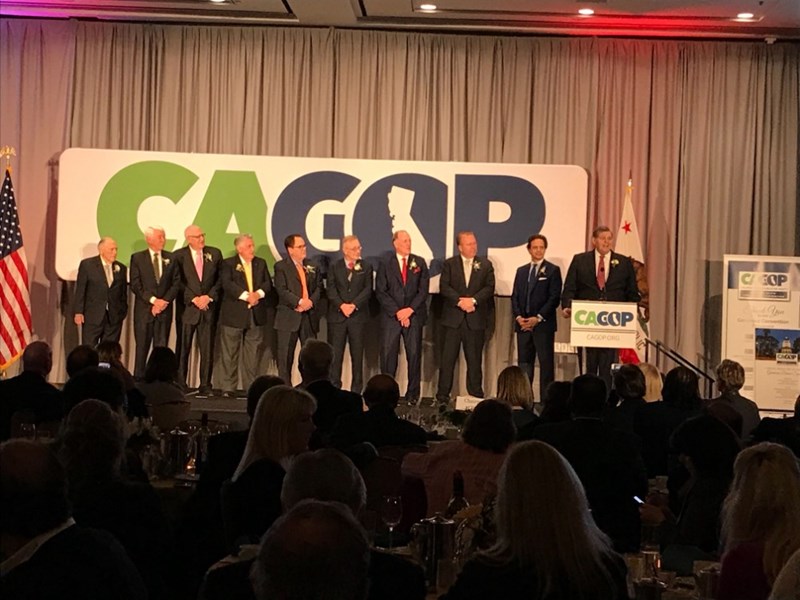 When the final gavel fell Sunday, the party had its first ever female chairperson, and its first Latina. But her task remains daunting: Chart the California GOP’s path forward under President Donald Trump.

And there was little advice from the big-name convention speakers, like Trump cabinet secretary Ben Carson and Wyoming Congresswoman Liz Cheney.

“I think that there is [an] unspoken dilemma that faces our party. Because they don’t know how to deal, essentially, with the Trump issue,” said Karen Roseberry, a community college instructor from Palmdale who attended the weekend convention.

Roseberry voted against the president in 2016. But last year, she voted for then-Congressman Steve Knight, one of seven Republicans who lost competitive House races.

She says the Republican message is still viable, even in California, but “the way it’s being delivered is alienating people, and it has to stop. We’re watching the bloodbath as a result of that alienation.”

Many Republicans don’t think the president is the problem. And that deep divide took center stage.

Along with Frank, former Orange County Assemblyman and gubernatorial candidate Travis Allen ran for chairperson with support from the GOP’s Tea Party wing.

“It’s time we have a Republican Party that fights for us, that demands common sense, better schools, safer communities, strong borders, supports our president!” Allen said as he accepted his nomination Saturday afternoon.

He’s fed up with California’s Republican establishment tiptoeing around President Trump and argued that the definition of insanity is doing the same thing over and over again and expecting different results.”

But Assemblyman Chad Mayes, a vocal Never Trumper, said it’s the ceremony from the convention’s opening night that proves the party must change.

Mayes described the moment when the former chairs posed for photos as “a bunch of old white guys — and this is coming from a white guy.” (Actually, one of the past chairmen is Cuban-American.)

“I do think it’s important for California Republicans to look like Californians,” Mayes said. “And I think having Jessica be that titular head of the party is gonna be good for us.” 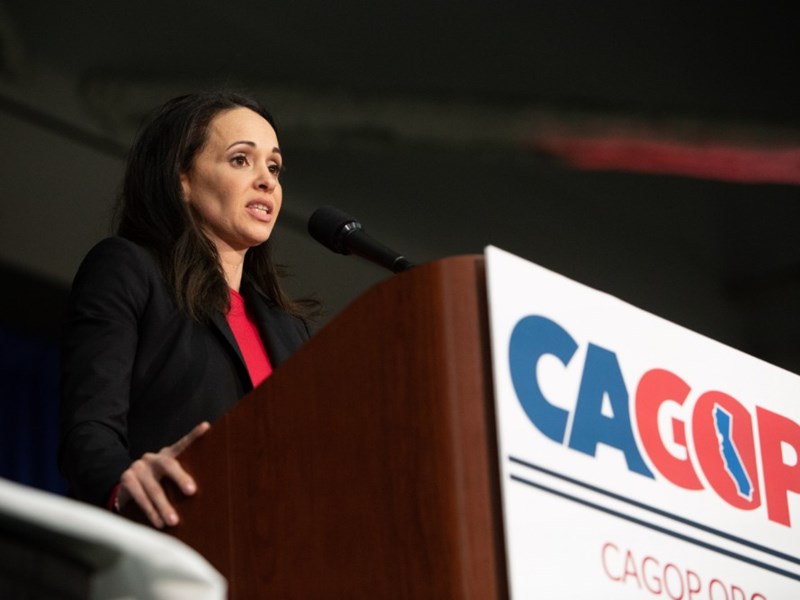 By “Jessica,” Mayes meant Jessica Patterson, an ally of House Minority Leader Kevin McCarthy who’s led an organization that recruits and trains state legislative candidates. She’s a Latina from Simi Valley, a mother of two young daughters, and supporters describe her as organized and tough as nails.

Patterson is far from a Never Trumper, but she hinted at a more aggressive — and nuanced — communications strategy.

“We’re gonna have to super-localize our message. We have to get back into communities that have felt neglected for a long time by our party. And it’s gonna take all of us,” she said during Saturday’s debate.

Patterson also vowed to take the fight to the Democrats who control the state Capitol, across the street from the convention hotel.

The next morning, tension filled the convention hall as more than 1,200 delegates voted for party chairperson. And when the results went up, Patterson won with 55 percent. Allen finished second at 31 percent; Frank was last with 15 percent.

For the first time in @CAGOP history, the party will be led by a woman. @millanpatterson has been elected chair with 54.5% of the vote on the first ballot. @JoinTravisAllen 2nd with 30.7%, @capoliticalnews 3rd at 14.7%. pic.twitter.com/PKBZhmTpu7

“Today, let’s serve notice to the Democrats in California that we are back and we are ready to deliver on the Republican comeback,” Patterson said in her victory speech.

And yet, the party’s challenges remain just as steep as before. Strategist Marty Wilson, who runs the California Chamber of Commerce’s political operation, suggested there will likely be no quick fix.

“I think what the GOP has to do is probably play small ball. Win where they can, hold what they’ve got, and start building towards the future,” Wilson said.

In other words, Wilson says that, for California Republicans desperate to become a viable second party in the Trump era — well, maybe they can’t.