Finding housing was one of the first challenges Alyssa Mathiowetz faced as a new graduate student at the University of California at Berkeley. She landed a room in a shared house near campus, but it came with a steep price tag: $1,500 a month.

“It’s definitely on the expensive side,” said the PhD student in metabolic biology.

Mathiowetz’s rent could soon decrease, however, thanks to a new homesharing program that matches graduate students looking for housing with retirees who have extra space in their homes. Its organizers hope the program will prove successful enough to export to other UC campuses.

College students have been hit hard by California’s housing crisis, struggling to find affordable digs near campuses that in many cases are located in the state’s priciest markets.

The median apartment rent in Berkeley tops $3,500 per month, according to real estate website Zillow. On-campus housing is scarce, and ten percent of students in a recent survey reported being homeless at some point in their college careers.

Meanwhile, along the city’s idyllic, tree-lined streets, aging homeowners who bought in decades ago have stayed put as property values rose around them.

Staff at Berkeley’s Retirement Center started strategizing last year about how to bring the two groups together. They won a grant from the chancellor’s office for a pilot program that will match six students with senior hosts for the spring semester.

“People want to continue living in their homes, and people are living longer and retiring later,” said Andy Gaines, the executive director of Ashby Village, a non-profit serving senior citizens that’s partnering with UC Berkeley on the project. “And oftentimes as people retire from the workforce and their friends and family die or move away, they are left more isolated.”

Sharing their homes with students can provide seniors with a sense of community, Gaines said.

Students will pay below-market rent — less than $1,000 per month — for bedrooms inside the homes of retired university faculty and staff.

That sounds like a bargain to Mathiowetz, who attended a recent information session. She saw other potential benefits, too. “It’d be great to get to learn more about the university and what it was like back then when they were working,” she said.

At the meeting, graduate student Rachel Bell coached interested students on writing enticing but honest bios outlining their interests and lifestyle. If you have a pet, Bell urged the students, mention it up front. Don’t wait for it to come up later.

Those profiles are passed on to homeowners, who — after both parties pass background checks — go on “dates” with prospective housemates until a match is found. Both parties then sign a “Living Together Agreement” detailing everything from acceptable TV-watching hours to who cleans the bathroom. The goal is to have participants living together by early February, said Retirement Center director Cary Sweeney.

While students can help their hosts with other household tasks, it’s not required.

“The intention is it’s about building a relationship, and the support grows out naturally from that relationship,” said Sweeney.

Interest in intergenerational living is percolating on a number of campuses nationwide. At rural Humboldt State, thriving cannabis and vacation rental industries have put pressure on already limited housing stock. Campus staff have collaborated with a local senior agency to host community events where seniors and students sign up for the online platform Silvernest, which connects potential housemates.

Students at New York University can dodge the Big Apple’s famous broker fees by applying to share apartments with seniors through the New York Foundation for Senior Citizens. Only four pairs of housemates have been matched so far, but Emily Gadd, who helps coordinate the program for NYU, says she expects interest to grow.

“Our guess is that in five years this is going to be something happening all over the country,” Gadd said.

Some of Anirban Karak’s friends were surprised to learn that his housemate was nearly 80, reports the PhD student at NYU. But adjusting to each other was “smoother than I expected,” Karak said.

The two shared a three-bedroom apartment in Queens for a semester and would have lunch or go shopping together several times per month. Karak, who is studying South Asian history, had a long research trip planned and was relieved not to have to set up a household by himself.

His housemate, who had also studied history before going into publishing “was quite well traveled, and had been to parts of Africa and China,” Karak said. “There was a lot that we could talk about.” 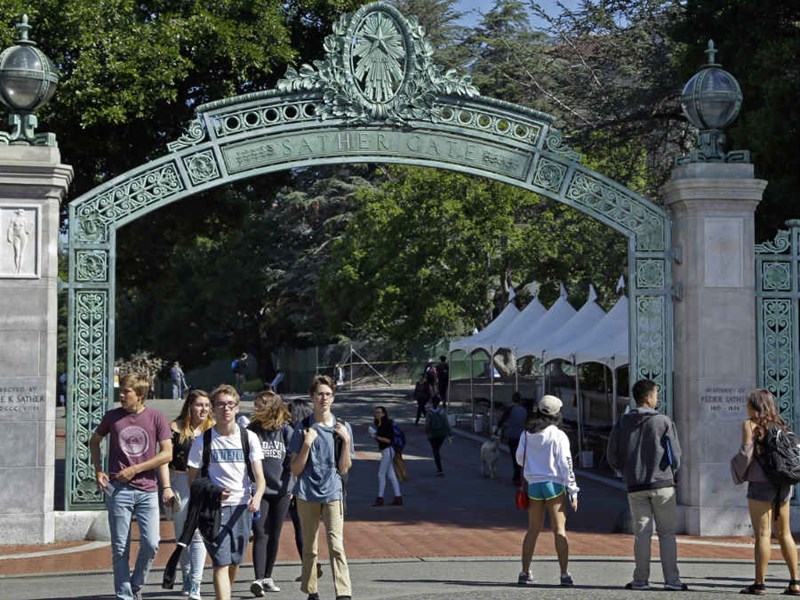 Still, for some older homeowners, inviting someone new into their space might be a hard sell.

Edward Vine, a former scientist at the Lawrence Berkeley Laboratory, and his wife have been hosting her 19-year-old cousin in their Mediterranean-style home in the Berkeley hills. Her room has a separate entrance, and Vine says overall he’s enjoyed helping her as she figures out her next steps in life.

But there are a few challenges, such as when Vine — who made a career studying energy efficiency — hears his houseguest taking extra-long showers.

“We can hear the shower in the whole house, and it’s like, how long should the shower be on?” he said.

So when an email dropped into his inbox asking him if he wanted to participate in Berkeley’s homesharing program, it gave him pause. His three sons are grown, and once his wife’s cousin moves out, he expects they’ll go back to being empty nesters.

“We’ve gotten used to having nobody besides ourselves, and we like it,” he said.

Playing matchmaker between students and seniors can also be labor-intensive, which might be why existing programs tend to be small.

“There’s been lots of excitement but sometimes that doesn’t turn into reality,” said Dan Birmingham, a former program manager at the Area 1 Agency on Aging who organized the Humboldt workshops.

To make the Berkeley program more attractive to homeowners, organizers chose to focus on graduate students, with their reputation for being more responsible and studious than undergrads. They figured the 16,000 former university employees the Retirement Center serves would have strong ties to campus and might be willing to serve as hosts. Several thousand of those live within a few miles of campus, Sweeney said.

This being a university, organizers will also closely study the pilot’s impact. A recent survey of Berkeley graduate students found that satisfaction with their living situation was one of the biggest predictors of overall well-being. Will homesharing reduce students’ financial stress? Will they bond with their hosts?

Organizers will check in with both homeowners and renters at the one-, three- and six-month marks, and volunteer mediators will be on call to help settle any disputes. If the program succeeds, retirement centers at other UC campuses could provide the support to scale up.

“A big part of this is educating people about the overwhelming cost of housing,” said Sweeney. “It is astronomical. If we can educate the community about this issue, while at the same time actually giving them some action to do, it would be a real coup.”