California Sen. Kamala Harris launched her 2020 presidential campaign with a massive rally in downtown Oakland Sunday afternoon, branding herself as a “progressive prosecutor” who will fight “for the people.”

“With faith in God, with fidelity to country, and with the fighting spirit I got from my mother,” Harris told the crowd, savoring every phrase of a moment that only comes once, “I stand before you today to announce my candidacy for president of the United States.”

The crowd of more than 20,000 people in and around Frank H. Ogawa Plaza was a show of force from a presidential campaign that only formally began six days earlier, even if the rally took place in the heart of Harris’ political base and the carefully choreographed rollout had long been in the works.

“In this moment, we must all speak truth about what is happening. We must seek truth, speak truth and fight for the truth,” she said.

The senator laid out an unabashedly progressive agenda with pricey proposals: Medicare for all, universal preschool, debt-free college and a tax cut of up to $500 a month for working families.

And, of course, she lit into President Trump.

“We are here at this moment in time because we must answer a fundamental question,” Harris said. “Who are we? Who are we as Americans? So let’s answer that question — to the world and each other — right here and right now: America, we are better than this.”

Harris has already drawn criticism from the left for describing herself as a “progressive prosecutor.” A New York Times op-ed slammed her for fighting to uphold wrongful convictions and avoiding reforms to the criminal justice system.

But Albert Felipe, who stood in the crowd with his wife, thinks that criticism is unfair. Felipe worked on Harris’ “Back on Track” recidivism program while she was San Francisco district attorney.

“When you try to do good with the community and you try to do a different way of doing things, but then also you have to uphold the law,” Felipe said. “And here’s the thing: In some cases, you’re not going to have both of those worlds mix together. So, you have to find the best way to go ahead and manage it.”

Harris weaved her life’s work before her 2016 election to the U.S. Senate — as a prosecutor, San Francisco district attorney and California attorney general — into her stump speech. Her campaign slogan — “for the people” — formed the narrative arc she hopes will envelop her presidential run.

“My whole life, I’ve only had one client: the people,” she said. 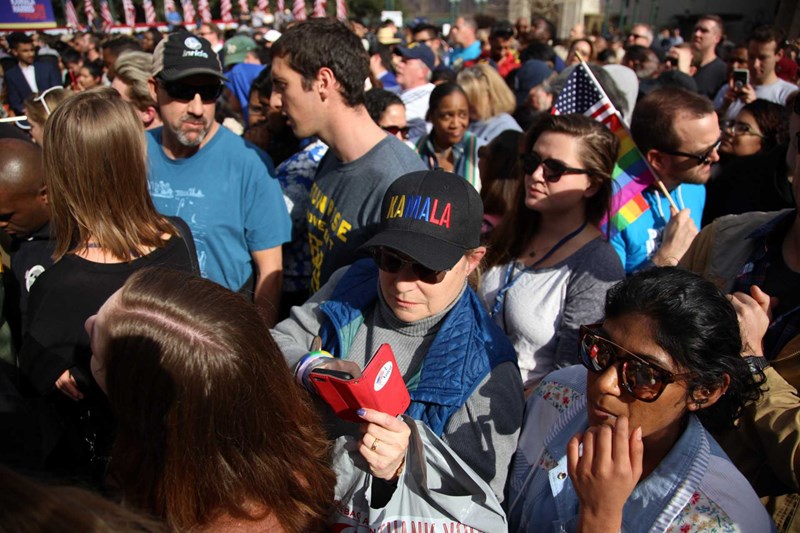 Those people in the crowd had nothing but praise for Harris. Shay Rogers of Alameda cheered “her fire” and said she plans to volunteer for the senator in Iowa and other primary states.

“She’s not gonna quit,” Rogers said. “And I know she will be the kind of president that we need.”

California’s presidential primary — and its treasure trove of delegates — is now in March, giving the state a rare opportunity to help pick the Democratic challenger to Trump. Voting by mail is scheduled to begin the day of the first-in-the-nation Iowa caucuses.